A Brief History of Sarmizegetusa Regia, the Capital of the Dacian Kingdom 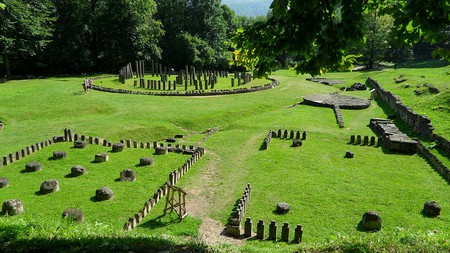 A UNESCO World Heritage site, Sarmizegetusa Regia, the capital of the ancient Dacian Kingdom, is one of the most mysterious historic landmarks you will ever visit in Romania. Located high in the mountains, on a plateau that is difficult to access even today, Sarmizegetusa Regia still shines and is a reminder of one of the brightest moments in the history of the Dacians, the enigmatic ancestors of the Romanian people.

Built in the Orăştie Mountains, atop a 1,200-meter high plateau, Sarmizegetusa Regia has served as the capital of the Dacian Kingdom for a century and a half as well as its military, religious, political and cultural centre. The Dacians, an ancient people related to the Thracians, lived between the Carpathian Mountains and west of the Black Sea and developed a complex and highly regarded civilisation that reached its peak between the centuries 1 BC and 1 AD.

As the core of the Dacians’ military defence system, which consisted of six citadels scattered around the surrounding mountains, Sarmizegetusa Regia was home to a quadrilateral fortress built using the technique of the murus dacicus, spread over five terraces on an area covering around 30,000 square meters. The murus dacicus, Latin for Dacian walls, is a building technique for walls and fortifications invented by the Dacians which consisted of outer walls made of rectangular, regular-sized stone blocks, without using mortar.

The sacred area was of high importance in the capital, especially during the rule of King Burebista (82 BC – 44 BC) when Dacian god Zalmoxis and the chief priest played a big role across the entire society at the time. In Sarmizegetusa Regia the Dacians built the largest circular and rectangular sanctuaries which include several smaller rectangular temples, whose columns are still visible today. The largest sanctuary, shaped as a circle, remains shrouded in mystery. Consisting of a setting of timber posts shaped as a D, encircled by a layer of timber surrounded in its turn by a stone kerb, it has been likened to Stonehenge.

The residential area stretched below the citadel in settlements built on terraces, and the noblemen of the day enjoyed quite a high standard of living. According to archaeological findings, their homes were served by a system of ceramic pipes which supplied them with running water.

Although they had a complex and highly developed civilisation, the Dacians have left little trace. What survives are tales and stories about this fierce people, written by poets and historians of the time, such as the Roman Ovid, who was exiled in Tomis, today’s Constanța, Horace and others. From Ovid, we know that their skin was white and hair was blond or red, and they had blue eyes. A people whose men were wearing long hair and beards, they were strongly built. Their hair and beards were never trimmed, their face and voices are coarse, the best embodiment of Mars, he wrote.

Trajan’s Column in Rome, erected to celebrate the defeat of the Dacians at the hands of the Roman Emperor after the Dacian Wars of century 1 AD, illustrates a picture that matches the descriptions of the ancient observers. In addition, it showed that their clothes were chosen to match their social status, and ranged from long shirts worn with belts, as well as furs and animal skins, and leather opanaks. Horace, the Latin poet, describes the Dacians as fierce, battle hardened and, according to Julian, Roman Emperor from 361 to 363, they were always ready for fight, due to the belief instilled in them by their god, Zalmoxis.

The legacy of the Dacian civilisation is complex, as shown by the many unique treasures unearthed at the site of their capital. An artefact still present at the site of Sarmizegetusa Regia, known as the Andesite Sun, believed to have appeared as an influence of Hellenistic culture, has been used as sundial. The most enigmatic and spectacular treasures unearthed at the site, the solid gold bracelets, reflect the richness and complexity of their civilisation.

Multi-spiralled, they had a complex role and were worn as jewellery, high-rank insignia and were also used as currency and votive offerings to the gods. Around 2,000 were found by looters using modern tools and later recovered by the authorities, most of them are now in the custody of the National Museum of Romanian History in Bucharest. There are just small pieces left, after the Romans, who were in need of gold to support their war campaigns elsewhere, found and brought Burebista’s treasure to Rome, discovered in a river after an act of treason, and consisting of 165,500 kg of gold and 331,000 kg of silver.

The Roman conquest, which led to the colonisation of the area and the birth of the Romanian people on that territory, also spelled the end of the Dacian civilisation, and saw the Dacians deported to other regions. The Romans built a replica, named Sarmizegetusa Ulpia Traiana, the capital of Roman Dacia, and is located some 40 kilometres away.

A place where even the fresh air feels heavy with mystery, Sarmizegetusa Regia has yet to reveal all of its secrets. Some of them, buried at a low distance beneath the ground, are waiting for nothing more than a strong storm to sprout to the surface. Such is the case of an exquisite jewellery mould discovered by the site’s keeper after a storm below a fallen tree. The 2,000-year-old artefact, an exquisite bronze cast, can be admired up close at the nearby Deva history museum.

Found in Grădiștea Muncelului vilage, Hunedoara County, the archaeological site can be reached from Costești. There are two ways to get there. From Beriu, via Oraștioara, via a very good 20-kilometre road that will take 40 minutes to, or from Călan, towards Orașul Nou and via Chitid, on a road that although similar in length, at approximately 22 kilometres, will cost you almost double that time.