13 Famous Films That Were Actually Shot in Romania 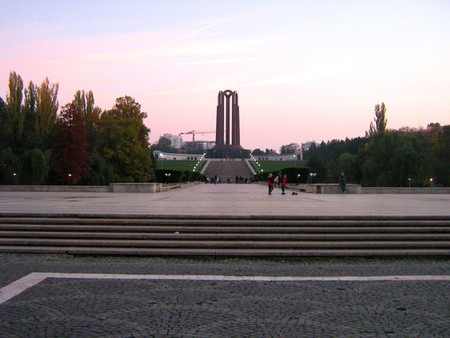 We’ve all fallen in love with a certain place thanks to the movies that are shot there.

What many people don’t know is that Romania has served as a backdrop for several popular movies starring the likes of Nicolas Cage, Harrison Ford and Nicole Kidman. Why not check out the films below and see if you can spot the scenes filmed in Romania?

A psychological thriller directed by Paul Schrade, The Dying of the Light was launched in 2014 and starred Nicolas Cage. The film was partially shot in Romania’s capital, Bucharest. Evan (Nicolas Cage) is a government agent who suffers from memory loss, and his job is to track down and kill a terrorist before he loses it completely. For this, he travels with Milton (Anton Yelchin) to Bucharest, where he takes on the identity of a Romanian. Several buildings like the Palace of Parliament and the Bucharest University can be spotted in the movie.

Filmed for 36 days in Bucharest, The Zero Theorem is a British-French-Romanian science-fiction film directed by Terry Gilliam. Starring Christoph Waltz, Tilda Swinton and Matt Damon, the story is centred on a computer genius, Qohen Leth (Waltz), who’s working on a formula to determine the meaning of life. Qohen’s workplace is set in the Romanian Atheneum while Carol Park served as a backdrop for Qohen and young Tom’s walk. Which other places from Bucharest can you spot in the movie?

Based on a Romanian novel written by Titus Popovici, A Farewell to Fools is a 2013 film directed by Bogdan Dreyer, starring Gerard Depardieu and Harvey Keitel. The whole movie is filmed in the majestic Medieval citadel of Sighișoara, in the Saxon village of Saschiz and in Bucharest. The action happens during WWII, when a boy, Alex (Romanian actor Bogdan Iancu), and his fool friend (Gerard Depardieu) discover a dead soldier in a field.

The Necessary Death of Charlie Countryman (2013)

A 2013 American-Romanian psychologic comedy-drama, the film captures the story of a young man travelling to Bucharest, searching for an adventure. Directed by Frederik Bond, starring Shia LaBeouf, Evan Rachel Wood and Mads Mikkelsen, the movie was almost entirely filmed in the Romanian capital, capturing its monumental buildings, communist apartment blocks and quirky nightclubs.

A 2012 mini-series produced by History Channel, Hatfield and McCoys is almost entirely shot in Transylvania, near Brașov, where the Carpathians served as a stand-in for the Appalachian Mountains. The three-part of the mini-series features Kevin Costner as William Anderson Hatfield and Bill Paxton as Randall McCoy.

The American superhero film, directed by Mark Neveldine, was shot in several places of Romania. You can spot in the movie the fairytale-like Hunedoara Castle, the wondrous Transfăgărășan Road and the picturesque city of Sibiu, as well as places in Târgu Jiu and Bucharest.

A 2010 thriller directed by Larysa Kondracki, The Whistleblower has several scenes shot in Romania, at the Media Pro Studios. The movie features actors Rachel Weisz, Monica Belluci and Benedict Cumberbatch and follows the story of a police officer sent to Bosnia as a United Nations peacekeeper.

The Brothers Bloom is a 2008 comedy directed by Rian Johnson starring Mark Ruffalo, Adrien Brody and Rachel Weisz. Several scenes were shot at the Peleș Castle in Sinaia, which acts as the residence of eccentric millionaire Penelope Stamp, who is a target of the Bloom Brothers. The outstanding castle is a residence filled with treasures much wanted by the two brothers. Other places appearing in the movie are the Constanța Port and Casino, as well as several places in Bucharest.

Based on a novel of the same name written by Romanian Mircea Eliade, the drama fantasy directed by Francis Ford Coppola showcases several places in Romania, like the mountainous resort of Sinaia, the wondrous city of Brașov, the main city of the Black Sea coast, Constanța, and the Piatra Neamț, one of the most beautiful cities of Moldova. The film stars Tim Roth, as well as Romanian actors Alexandra Maria Lara and Andi Vasluianu, in a love story shrouded in mystery.

An epic war drama directed by Anthony Minghella, Cold Mountain is almost fully shot in Romania, in the village of Reci and in the Romanian capital. This movie brought Nicole Kidman, Jude Law, Renée Zellweger and Natalie Portman to Romania for what was an Oscar-winning movie.

Shot entirely in the village of Poienari in Argeș County, in a picturesque countryside scenery, the movie tells the story of three southern women who are fighting to defend their home after the American Civil War. The 2014 action thriller directed by Daniel Barber stars Brit Marling, Hailee Steinfeld, Muna Otaru, Sam Worthington and Amy Nutall.

Partially filmed in Bucharest, The Expendables 3 is a 2014 action film starring Sylvester Stallone, Antonio Banderas, Mel Gibson, Harrison Ford and Arnold Schwarzenegger. The movie presents the story of a mercenary group, the Expendables, who started a conflict with Conrad Stonebanks, an arms dealer who wants to destroy them. In the movie scenes, you can spot Bucharest’s Old Centre as well as the Triumph Arch.

What better place for a fairytale story to be filmed if not the Peles Castle in Sinaia? The comedy-drama film captures the Peles Castle as an exterior for the Castlebury Castle, the place where the movie’s story is developed. The story is about a young woman travelling for Christmas with her niece and nephew to a castle in Europe. The movie features Romanian actors Razvan Oprea, Madalina Anea and Razvan Ciuraru.