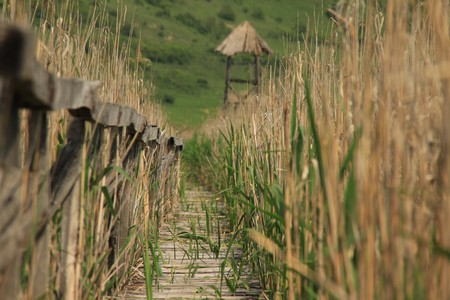 While for many, Romania is still an unknown destination, the country lures more and more tourists to discover its wonders. Still, those who have visited or read about it know that cities like Bucharest, Brașov, Sibiu or Sighișoara are already very popular with tourists. So for those that like to go off the beaten path, we’ve selected some picturesque villages to explore.

A small village in the Banat region, Gărâna is a village with German roots. Founded in 1828 by the German colonists who arrived in the Banat region, the village is the smallest one in the country. Yet, it is the host of the most enduring jazz festival in Central and Eastern Europe, Gărâna Jazz Festival, gathering thousands of people that go to enjoy live concerts in a bucolic setting.

Cireșoaia is literally the village of cherries. Dating back to the 13th century, Cireșoaia belonged to one of the most powerful noble families in the region, the Apafi family. Since the 17th century, a Szekler community has settled in the village, and nowadays the majority of the population speaks Hungarian. In summer, the families in the area organize the Cherry Festival, where tens of local varieties can be tasted, coming straight from their cherry orchards.

A Saxon village in the Sibiu area, Hoghilag is representative of the classic Saxon villages, with stone houses aligned along the main road and tall stone fences that prevent strangers from seeing inside the courtyard. The fortified church is not missing either, a characteristic element for all Saxon villages. But what is specific to Hoghilag are the tuberoses, grown by the village’s families for centuries. In August, the villagers organize the Tuberose Festival, when the flowers are used for cooking or are turned into perfumes.

A remote village north of Cluj-Napoca, Sic is a picturesque village where you can wander around while enjoying its stillness. The village’s Dance Museum features exhibitions of traditional clothes, musical instruments, furniture, and photos from the local celebrations. Right next to the village, you can explore the Transylvanian Delta, an area covered in floating reeds.

Dating back to the 5th century, Bacova used to be a Romanian village until the 18th century, when the settlement was colonized by Swabians, arriving there from Germany and Bohemia. Peasants and craftsmen, they contributed to the village’s development. However, during the two World Wars, the village saw its inhabitants deported to the Russian camps or having left for Germany. Nevertheless, you can still find some Swabians living in the picturesque village.

A traditional village in Dobrogea region, Enisala is scattered with white houses having reed-made roofs, small swamps, and surrounded by views of the sea and the nearby lakes. Thanks to its position, close to the Black Sea, the village was filled with Genovese merchants during the Middle Ages. In the 13th century, they built the Enisala citadel next to the village, which became a significant military, economic, and cultural center. Its ruins can be seen up to today.

Located in the traditional region of Maramureș, Sârbi is a secluded village hiding some local gems. A place where modern technology hasn’t yet replaced the traditional crafts, Sârbi is the village where you can wash clothes in a vâltoare, an ancestor of the whirlpool, also used to thicken wool textiles, as well as a copper still for distilling the local brandy, horincă. Moreover, the village is sprinkled with the traditional wooden gates, welcoming people, and talented artisans.

Located in the Călata Folk Region, Sâncraiu is a village where you can enjoy vivid traditional events and celebrations. Willing to promote their culture and traditions, the locals organize guided tours of the village and horseback riding tours in its surroundings. Moreover, cultural manifestations such as “Pine Bud Picking” in May, “International Kalotaszeg Folk Music and Dance Camp,” in July or the Grape Harvest Festival in October are organized all year long to promote the local heritage.

A unique village in the Banat region, Charlottenburg is the only round village in Romania. Founded by Swabians in the 18th century, the off-the-beaten-track village displays houses, stables, and barns that form a perfect circle. Moreover, everything is symmetric: all the houses have the same height and the same distance in-between them.

Not as well known as other Saxon villages like Viscri or Biertan, Mălâncrav is more isolated but boasts the largest Saxon population in Transylvania. A walk in the village will reveal its beautiful Gothic church, beautifully painted on the inside, and the Apafi Mansion, an old mansion converted into a unique guesthouse. Furthermore, in the village, you can and taste and buy apple juice made in Mălâncrav.

A charming village in Moldova region, Văratec houses the largest convent in Romania. More than 400 nuns live in the village and inside its monastery. But what’s truly incredible about this monastic village is that all the magnificent houses were entirely built and maintained by the nuns.