The 20 Best Attractions in Wrocław, Poland 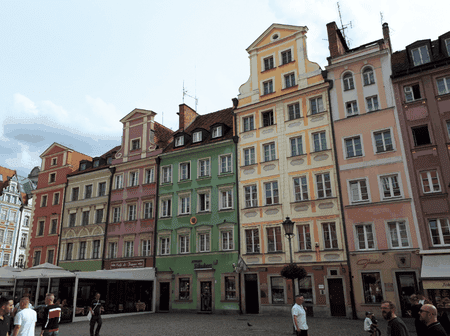 Wrocław, the capital of Poland’s Lower Silesia (locally known as ‘Śląsk‘) province is a travel gem for wandering hearts. Wrocław could easily win the award for the most beautiful city in Europe. Its Old Town Square is an unforgettable masterpiece. Its train station has the likeness of a medieval castle. And as you stroll through the pretty streets, you might even spy a few gnomes! The city has over 200 gnomes, deliberately placed on the streets. These are the twenty best attractions in Wrocław. 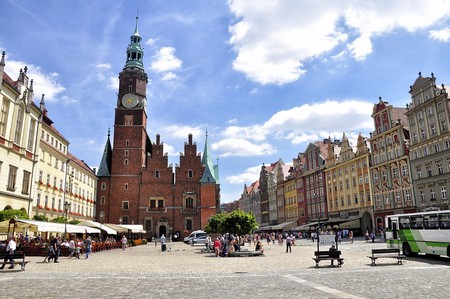 Anyone who has ever visited Wrocław will be aware of the famous gnomes! These mini statues are scattered all over the city and are one of the city’s most intriguing sights. But don’t just visit them and take photos. Read up on them; every gnome has a name and a story behind it, and it makes a good game to see how many you can find. 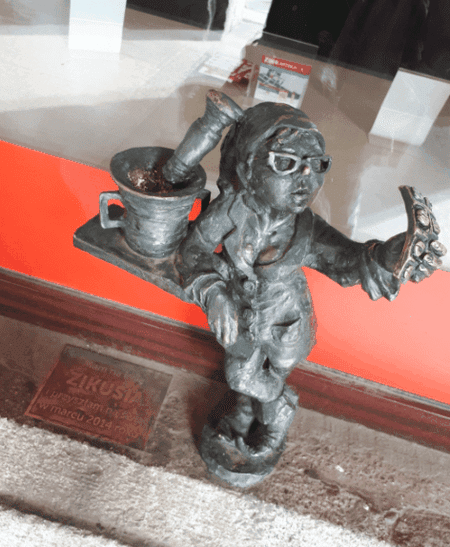 On a street corner in central Wrocław is an unusual monument based on Jerzy Kalina’s temporary art installation, which was set up in Warsaw in 1977. It is known as the monument of an anonymous passer-by, and viewers often make their own judgments about the meaning of its bronze features disappearing into the ground.

Whether arriving by train or not, the main train station in Wrocław (Wrocław Główny) is one of the city’s finest buildings. In its bright yellow splendour, it sparkles in the Wrocław skyline as a fantastic gateway to many other towns and cities within Poland. It resembles a castle and has a huge interior with shops, restaurants and cafés aplenty. 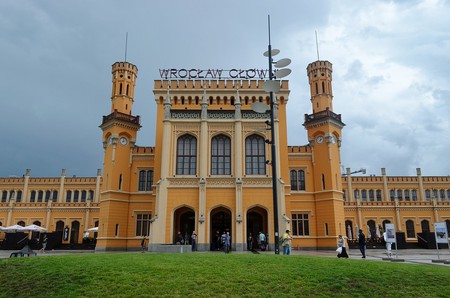 While it sounds like a viewpoint, the Panorama Racławicka is actually a painting depicting the Battle of Racławice, which occurred during the Kościuszko Uprising of 1794. It is a massive nineteenth century painting that reaches a height of 15 meters (49 ft) and a length 114 meters (374 ft). It sits in a room of its own.

Wrocław was one of four Polish cities to be given the honour of hosting Euro 2012. The football stadium here is huge, holding 42,771 spectators, and well worth a visit. If you are lucky to be here when there is a match on, get a ticket and watch the local team, Śląsk Wrocław, play in the Polish Ekstraklasa (top division). The team has won the Polish League twice and been three times runners up. 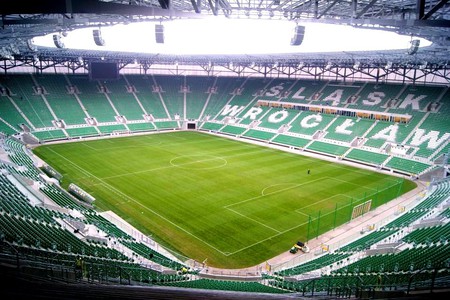 It’s important to check out some of the Jewish history in Wrocław, and so a visit to this synagogue is recommended. The White Stork is the only synagogue in Wrocław to escape the torches of the infamous ‘Kristallnacht‘. Its location is not so obvious however, as it is slightly hidden from view in a courtyard between Antoniego Street and Włodkowica Street. It’s also important to know the history here – this is where many members of the Jewish community were rounded up and sent to death camps during World War II. These days, the area prospers with many trendy bars, cafés and beer gardens attracting tourists and locals alike.

The Centennial Hall is a historic building in the city that was listed as a UNESCO World Heritage Site in 2006. It was built by architect Max Berg from 1911 to 1913, back in the days when the city was part of the German Empire. These days The Centennial Hall is used as a multi-functional venue playing host to exhibitions, concerts, plays and sporting events. 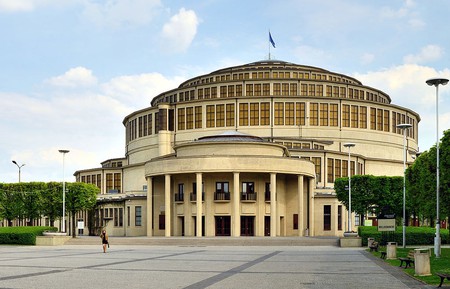 Ostrów Tumski is the oldest part of Wrocław and therefore a must-visit for history buffs and anyone keen to see where this sprawling city once began. The first constructions on Ostrów Tumski were built in the tenth century by the Piast dynasty. It’s worth a walk to admire the Gothic Cathedral, the Church of St Giles (oldest building in the city), sculptures, gardens, pretty streets and linking bridges crossing to the rest of the city.

Wrocław’s Old Town Square is simply one of the prettiest squares in Poland. It is easy to see why. The buildings are full of colour and vibrancy, most of them housing flats and apartments on the higher floors with good bistros, bars and restaurants on the lower levels. 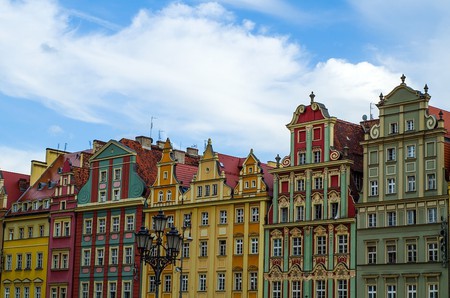 Now that you have explored historic Wrocław, come back to the modern era by checking out the Multimedia Fountain. It is free from May until the end of September; be sure to check with locals and the tourist information centre for events happening here. On weekend nights there is usually a stunning light display that has attracted crowds of up to 20,000 in the past. Music accompanies the light performance.

A popular building on Instagram and one of the architectural gems in Old Town Square, Wrocław’s Old Town Hall is a striking building to admire day and night with its golden colours. It was built in the thirteenth century and has become one of the main landmarks of the city. This one is not to be missed! 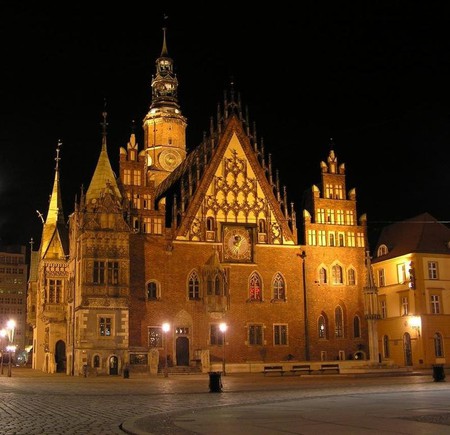 Though not immediately obvious as you walk past it, this part of town with two connecting buildings is hugely popular for a very good reason. A pair of buildings that sit here are linked by an archway, which is meant to symbolise a couple holding hands. The buildings are known locally as ‘Jaś i Małgosia/Małgorzata’, often translated as ‘Hansel and Gretel’ for tourists.

There is a great chance to see some real animals here in Wrocław’s zoo. It is the oldest and largest zoo in Poland, and covers 33 hectares (82 acres) in downtown Wrocław. It is home to about 10,500 animals representing about 1,132 species, which also means, in terms of the number of animal species, it is the third largest zoo in the world.

It’s nice to escape buildings and churches and check out some of the green parts of the city. A popular place to chill is at the Botanical Gardens, where you can see lots of plants, flowers, trees, aquariums, sculptures, a large pond and pretty bridges. There is even a garden shop and cosy eatery. You can be sure to find some peace and quiet here.

Wrocław is blessed with lots of churches, the most famous of which is probably the Cathedral of St John The Baptist. When construction began in 1244, this was the first brick building in Poland. You can head to the top (an elevator is available) for excellent views. At the top you’ll find a small exhibition to accompany the fantastic views. 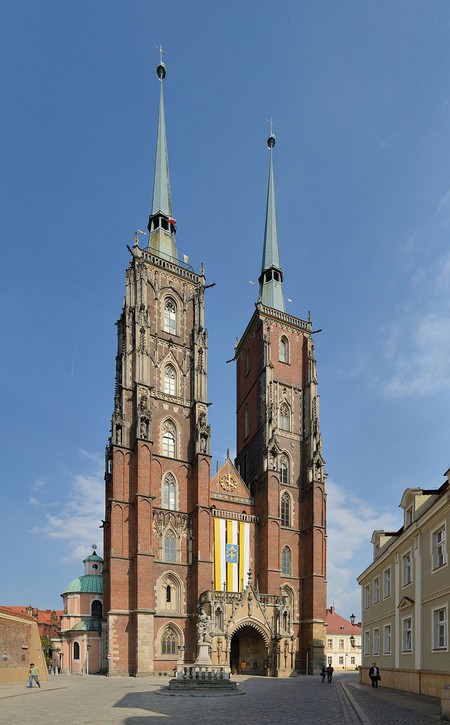 Built between 1906 and 1908, Wrocław’s marvellous Market Hall is a great place to see local vendors at work. The indoor building itself has an age-old traditional interior and two levels. The bottom level tends to be reserved for produce and a decent selection of cheeses and meats. The upper level is dedicated to clothes and household items.

One place in the area worth checking out is the fantastic Baroque Royal Palace that houses Wrocław’s most modern and worthwhile museum. It’s a huge museum, so if you only have a short time, make sure to check out the permanent free exhibition, ‘1000 Years of Wrocław’. 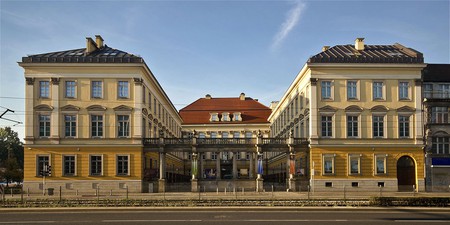 A second church to grace the list is the impressive Church of St Elizabeth. There was an original church on this site in the twelfth century, but as it crumbled, another was built to replace it. This happened more than once. Again, you can enjoy stunning views from the top, but this time you’ll have to take the 200 steps (there isn’t an elevator).

There are not too many reminders of communist times in Wrocław as the city has progressed a lot since those days, but you can still experience what it was like. At Pub PRL, you will find yourself surrounded with busts of Lenin, communist quotes and glimpses of the times when Poland was known as Polska Rzeczpospolita Ludowa (PRL), or in English ‘The Polish People’s Republic’ (1952–1989). Located in Old Town Square, Pub PRL has a great food and drink menu, and is one of the best communist style bars in Poland, making it a perfect lunchtime or evening hangout. 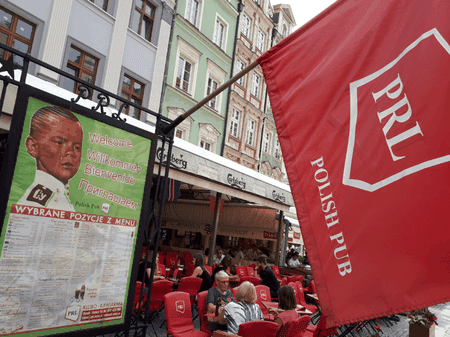 The final must-see Wrocław attraction on the list just happens to be the tallest building in Poland, the Sky Tower. Construction began in December 2007, and it was unveiled in 2012. Officially, the Palace of Culture and Science in Warsaw is taller due to the aerials on its upper floors, but from ground level to the roof, Sky Tower is the highest in the country, at 212 metres (696 feet). It has 51 floors, but the public viewing floor is on the 49th level. Nevertheless, you are sure to enjoy sensational views over Wrocław. 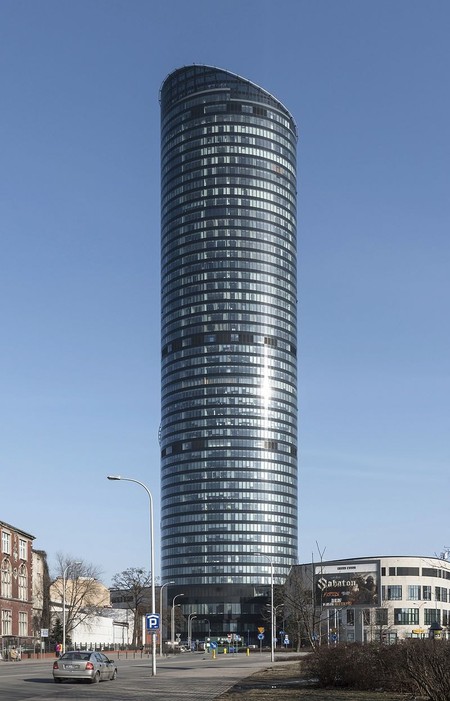