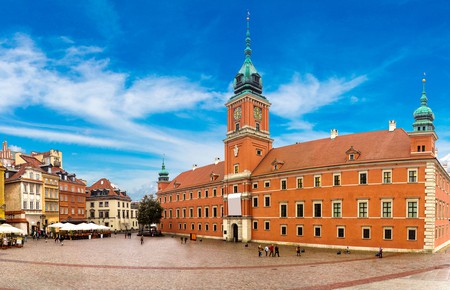 Warsaw has undergone some rapid changes in the last 20 years since the fall of communism. It has developed into a city for new business, turned into a tourist hub and really proved why this is the true capital city, ahead of previous capitals Gniezno and Kraków. However, Warsaw still sits in the shadow of the more popular tourist destinations of Wrocław, Gdańsk and Kraków, so it’s time to prove that those who neglect Warsaw are missing out on some real gems. These 12 reasons should entice you to visit Warsaw very soon. 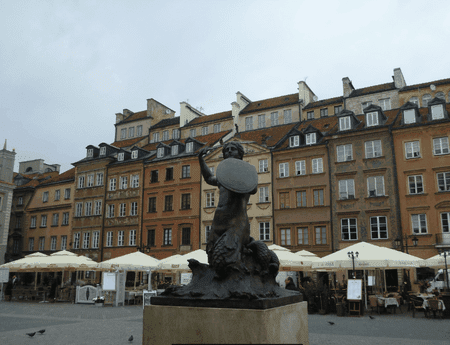 Ruins
Facebook
Email
Twitter
Pinterest
Copy link
Share
Map View
Poland has 17 UNESCO listed World Heritage Sites and arguably the most fascinating of these is Warsaw Old Town, which lay in ruins in 1944 after the intense bombing campaigns during the Second World War and the Warsaw Uprising. At that time, you would never have believed that, seven decades later, the Old Town would be just as colourful and pretty as it was before the the Nazis destroyed it. The rebuilding process was long and gruelling, but the local residents are proud of how good Warsaw’s Stare Miasto now looks.
Open In Google Maps
Stare Miasto, Warsaw, Poland
Give us feedback

To understand the 1944 Warsaw Uprising 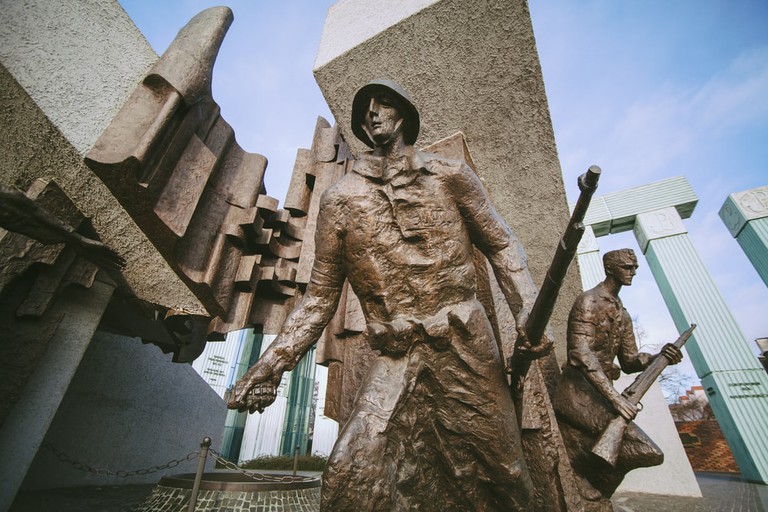 The Warsaw Uprising Museum | © Sauleshechka/Shutterstock
While Warsaw boasts many museums, your first port of call should be the museum that all locals want you to see – the Warsaw Uprising Museum. They have been able to document the horrors and disasters of the 1944 Warsaw Uprising, where the Nazis murdered many innocent Polish people in the capital. The exact number killed is not known, but is estimated at between 150,000 and 200,000 in a bloody battle that lasted 63 days, in which the city was completely destroyed. This museum details exactly what happened, on four levels and with some brutal images, videos and relics from the 1944 tragedy. There are also many memorials around the city dedicated to those who died.
Open In Google Maps
Grzybowska, Warsaw, Poland
Give us feedback

The views from the Palace of Culture and Science 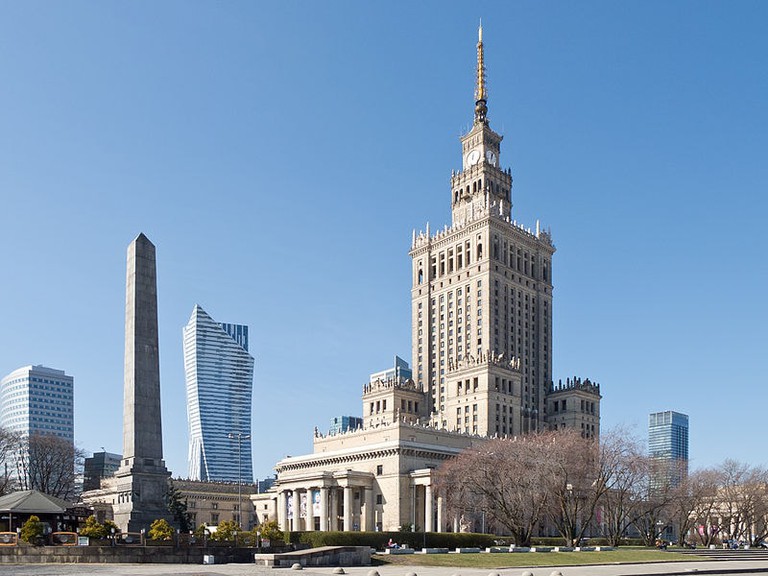 Palace of Culture and Science, Warsaw | © Carlos Delgado/Wikimedia Commons
While there is still some debate among the locals about whether they love or hate the Pałac Kultury i Nauki (Palace of Culture and Science), one thing is clear – the views from the top are superb. This is Warsaw’s tallest building and was built as a ‘present’ from Stalin to the Polish people during his reign, which explains why it divides opinion. Get the lift up to the viewing deck and decide for yourself.
Open In Google Maps
Plac Defilad, Warsaw, Poland
Give us feedback

The artistic neighbourhood of Praga 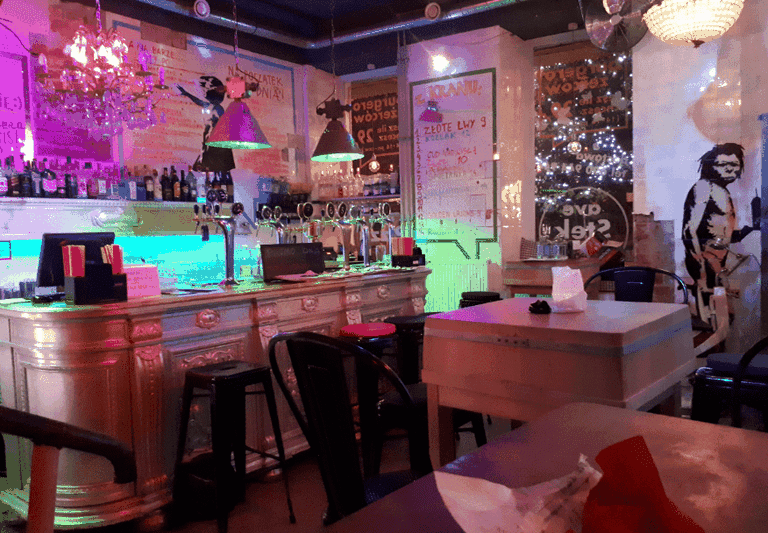 So much more than a butcher shop, Zakład Mięsny is a quirky, local hangout | © Northern Irishman in Poland
There’s Amsterdam with its coffeeshops; London lures us in with Camden Town; and Copenhagen boasts the quirky Freetown Christiania. But visit Warsaw and discover something even more unusual and sublime: Welcome to Praga! Praga is like a whole new city and it’s only across the other side of the Wisła River. Praga is bereft of the commercial influx of a Starbucks or McDonald’s on every corner – expect arty cafés, quaint little bookshops, local pubs with atmosphere and vibrant graffiti.
Open In Google Maps
Stara Praga, Warsaw, Poland
Give us feedback

You may have heard of Swiss and Belgian chocolate, but what about Poland’s finest, Wedel? The Wedel Chocolate Factory offers tours for visitors and there are many shops and cafés throughout Poland where you can sample some of the best-quality chocolate you will ever eat. What’s more, a bar of Wedel chocolate only costs around 2 or 3 złotych. 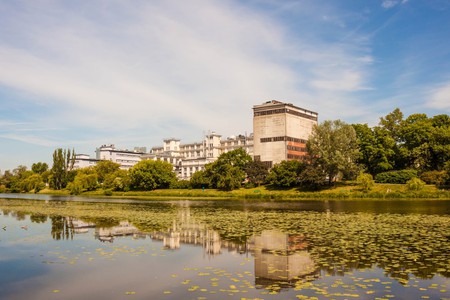 To laze in Łazienki Park

Park
Facebook
Email
Twitter
Pinterest
Copy link
Share
Map View
Warsaw is a very green city. It is full of floral gardens, leafy parks and all the charms of nature. Łazienki Park is one of the finest city parks in Eastern Europe; it occupies 76 hectares of the city centre. There is a stunning lake here, a statue of Chopin, wide gardens, a huge pond, a café, many different walks to go on and you may see peacocks wandering around, too.
Open In Google Maps
Łazienki Królewskie, Warsaw, Poland
Give us feedback

To experience the legacy of Chopin 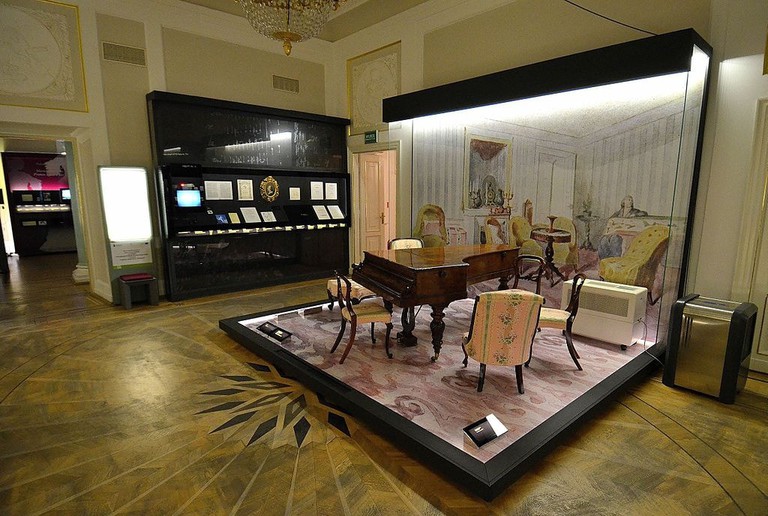 Chopin's Last piano | | © Adrian Grycuk / WikiCommons
There can be no better place to understand the legacy of pianist and composer Frédéric Chopin than his home city. Start off by touring the Chopin Museum, then press a few buttons on the famous Chopin benches, before spending the evening listening to a concert in one of many venues that continue to showcase his work. You can also see his last ever piano in the museum.
Open In Google Maps
Pałac Gnińskich, Warsaw, Poland
Give us feedback

To learn about Marie Curie in her home city 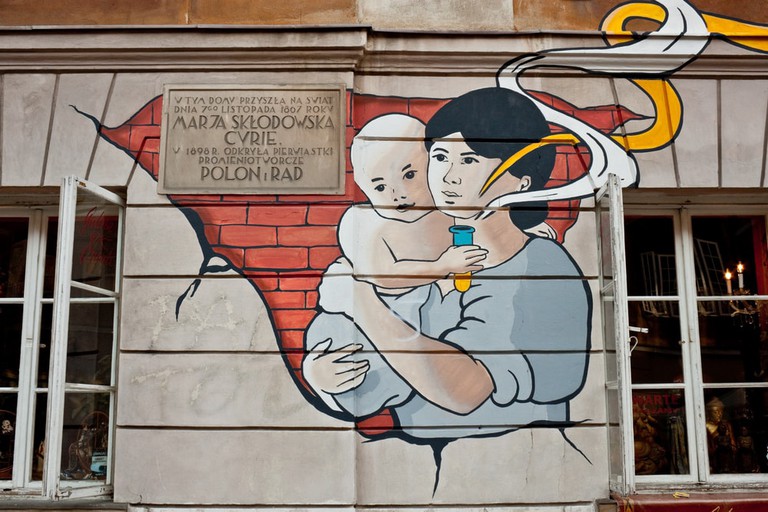 Exterior wall of the Marie Curie Museum, Warsaw, Poland | © Anastasia Petrova/Shutterstock
Marie Skłodowska Curie was born in Warsaw in 1867 and is one of the most famous scientists of all time. She is still the only woman to win the Nobel Prize twice and she achieved those awards in two different sciences, physics and chemistry. To learn about Marie Curie’s life in Warsaw, start by touring her museum, before checking out her statue, her park and even a street named in her honour.
Open In Google Maps
Freta, Warsaw, Poland
Give us feedback

Warsaw has the best bar scene in Eastern Europe

People rave about Prague, Berlin and even Riga, but here among the poky streets of the Polish capital are some truly hidden gems. From a secret bar to bars that don’t look like bars, to wild cocktail bars and swanky wine bars, the city has it all. Head to the Pawilony area for a zone with 12 bars in a compact alleyway or the trendy Nowogradzka Street for its up-and-coming craft beer bars. 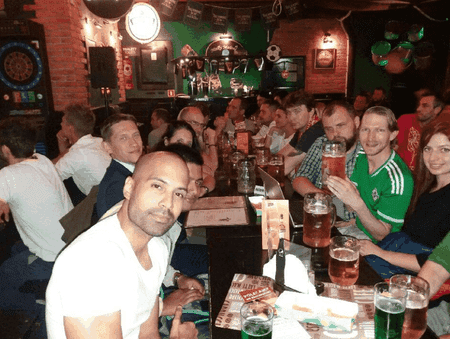 Memorial
Facebook
Email
Twitter
Pinterest
Copy link
Share
Map View
Warsaw is the city you need to visit to check out Poland’s Presidential Palace. It is here that Polish presidents have been based since the 17th century. The Palace is guarded daily, yet accessible to all as it is on Warsaw’s “Golden Mile” (Krakowskie Przedmiescie). Heroic Polish Army Commander Józef Poniatowski’s statue sits in front of the stunning building. The Polish and EU flags fly here and it is also the venue for many protests, speeches and public demonstrations. There is also a memorial to the sad Smolensk air disaster, which claimed the lives of the then President Lech Kaczyński and his wife Maria.
Open In Google Maps
Krakowskie Przedmieście, Warsaw, Poland
Give us feedback

To get your science fix at the Copernicus Centre 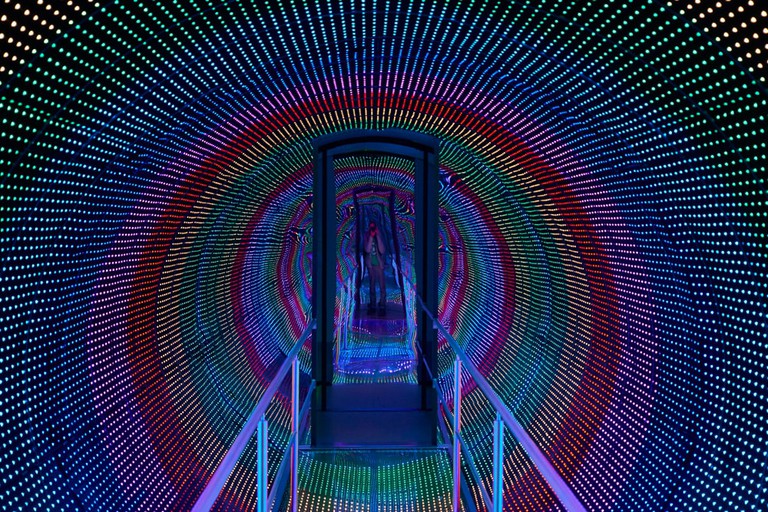 The Copernicus Science Centre, Warsaw, Poland | © Petr Bonek/Shutterstock
Down by the Wisła River sits a truly elaborate and stylish building. Welcome to the Copernicus Science Centre, which is one of the most creative and innovative science museums in Europe. It opened in 2010 and runs labs, workshops and special projects suitable for children, students, teachers and just about everyone. And let’s not forget the man it was named after – Nicolaus Copernicus, the famous Polish astronomer who decided it was the Sun rather than the Earth at the centre of the universe.
Open In Google Maps
Wybrzeże Kościuszkowskie, Warsaw, Poland
Give us feedback

To step inside the world's narrowest house 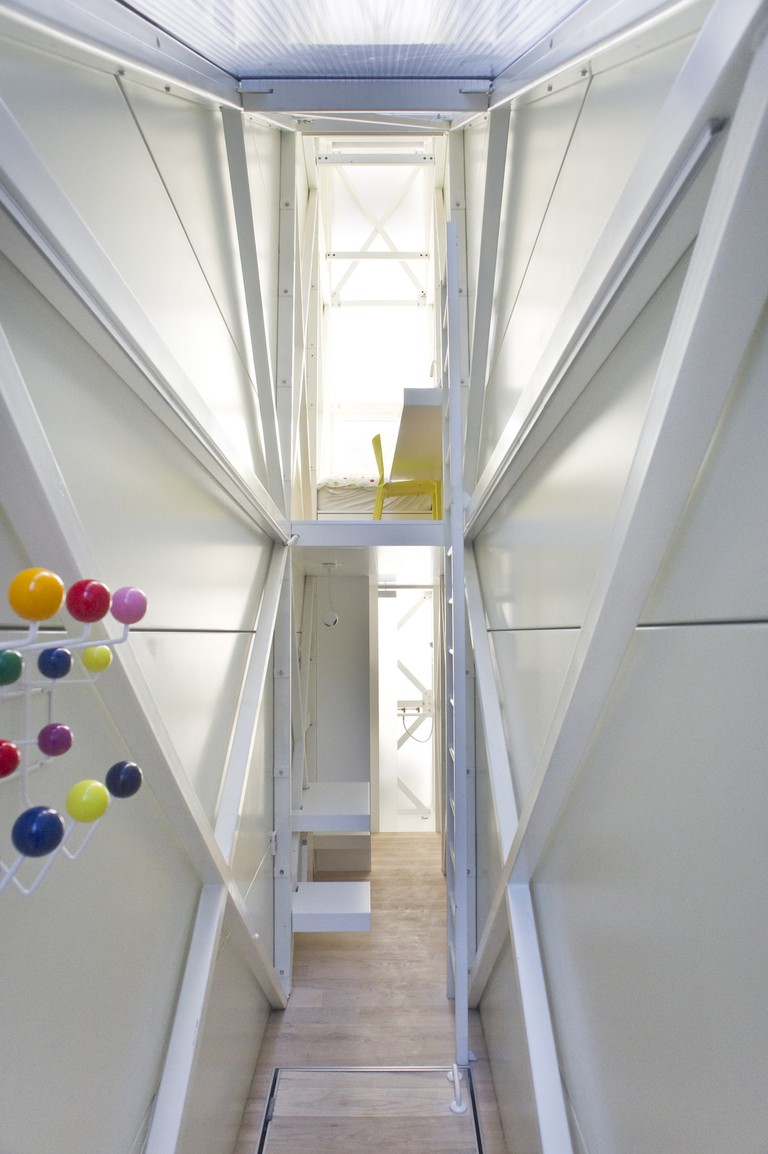 Inside The Keret House, Warsaw, Poland | © Forgemind ArchiMedia/Flickr
Keret House in Warsaw is a house that was squeezed as an insert between two buildings – at under 5ft wide, it is the narrowest house in the world. It was designed by Polish architect Jakub Szczęsny. If you want to visit, you’ll need to organise it well in advance through the Keret House website.
Open In Google Maps
between ul. Chłodna 22 and ul. Żelazna 74, Warsaw, Poland
Give us feedback
Give us feedback