The Most Beautiful Churches and Cathedrals in Luxembourg 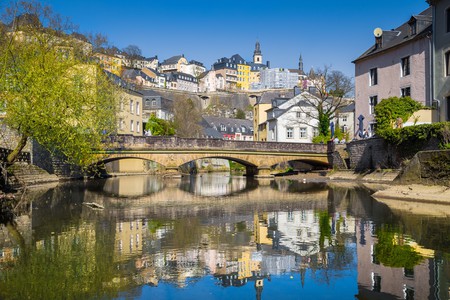 The tiny European country of Luxembourg is a beautiful region boasting lush, dense forestry, majestic castles and astonishing architecture dating back hundreds of years. The captivating capital, Luxembourg City, is famed for its fortified medieval old town, which is perched on sheer cliffs and rightly regarded as the heart of the country. The city’s impressive array of religiously significant structures and churches illustrate Luxembourg’s rich and varied past. 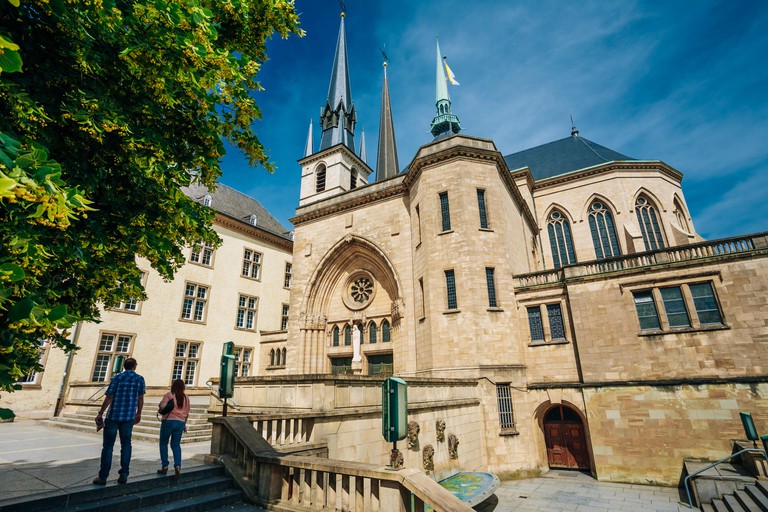 Founded as a Jesuit church and built between 1613 and 1621, Notre-Dame Cathedral stands today as the Roman Catholic Cathedral of Luxembourg City. In fact, it’s the only cathedral in the entire country. It’s a fascinating mix of semi-Renaissance, semi-Baroque elements from its first iteration, coupled with neo-Gothic additions. The cathedral was enlarged 1935–1938, and features stained glass windows from the 19th and 20th centuries, but it still retains its stunningly decorated alabaster columns, which line the nave, leading up to its pointed arches and ribbed vaults. At the end of the 18th century, Notre-Dame Cathedral received a beautiful image of the Maria Consolatrix Afflictorum, the patron saint of both Luxembourg City and the nation itself. Notable figures who have been buried here include several members of the Grand-Ducal family, such as John of Bohemia, Marie-Adélaide, the Grand Duchess of Luxembourg, and Joséphine Charlotte of Belgium.

Church
Facebook
Email
Twitter
Pinterest
Copy link
Share
Trinity Church has been continually used for Protestant religious ceremonies in Luxembourg City since 1817. Indeed, the first chapel in the region was actually built on this spot in 1313, meaning this area was long been regarded as a sacred site. The original chapel was destroyed when Luxembourg City was invaded by Louise XIV in 1684, and construction began on the Baroque church we see today in 1737. But the church was soon in trouble again, this time during the French Revolution when it was seized and used as a theatre and fodder store. Today, the building remains an arresting site, and provides an idyllic setting in which to relax and worship, and features ornate fittings, beautiful stained-glass windows and a richly decorated entrance. 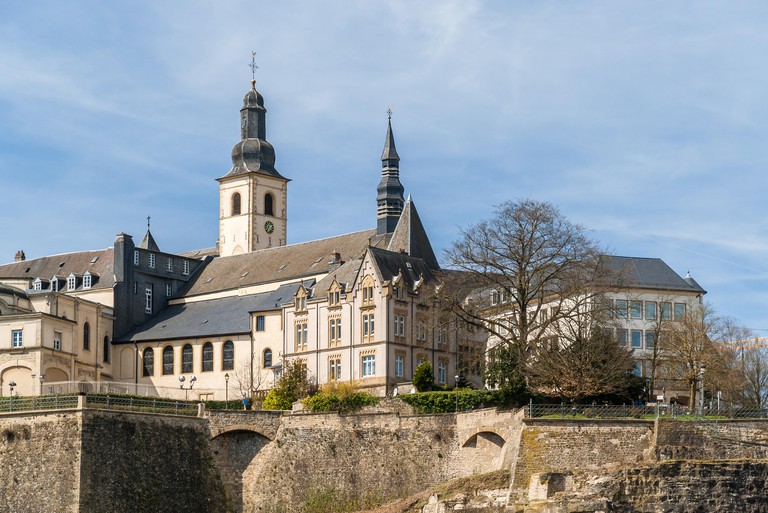 A truly unique architectural spectacle, St. Peter and Paul Church is the first Russian Orthodox Church in Luxembourg. Its unique exterior is characterised by the Orthodox tradition of vivid patterns and mixes neutral colours such as white with more stark, daring ones, including bright reds and bold blues. The gold and blue roof domes feature ornate golden crosses, and the overall design draws on grand images of the Kremlin in Moscow. The church was built in 1979 at the request of Archbishop Anthony Bartoshevich and has been under the care of priest Sergey Pukh ever since. 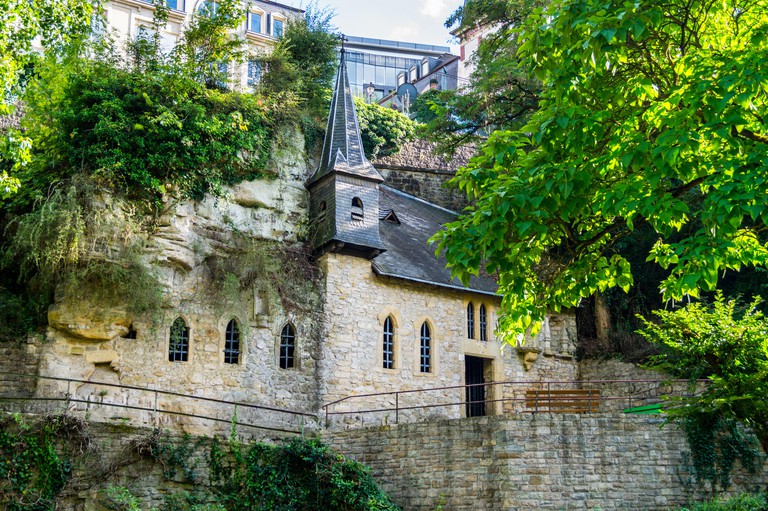 Since the 11th century, the location on which Quirinus Chapel sits has been consecrated to Saint Quirin | © Mark Dunn / Alamy Stock Photo

Constructed on a site that the Romans considered to be a somewhat magical Christian sanctuary, Quirinus Chapel is not easily reachable, as it is surrounded by dense forestry and rocky gorges. Since the 11th century, its location has been consecrated to Saint Quirin, and services have been held in the chapel for more than 800 years. The structure displays Gothic stylistic features and is partly hewn into the surrounding rock, adding to its spooky, other-worldly atmosphere. Erected in 1355, the roof and charming bell towers were added at the end of the 19th century. 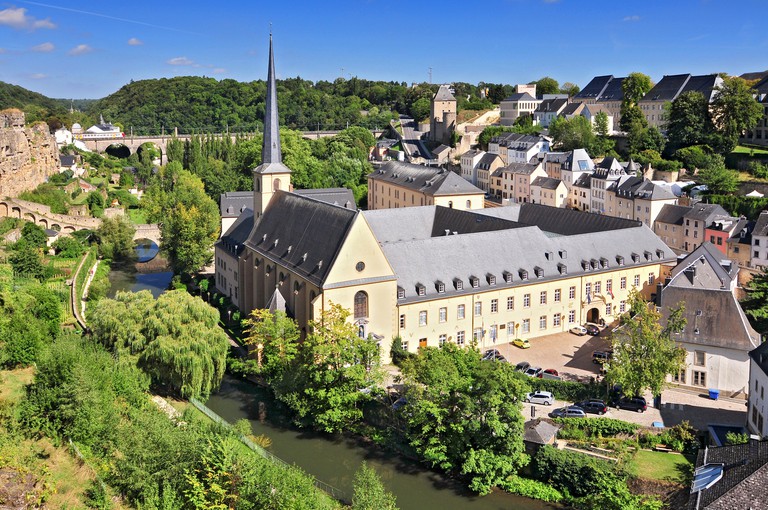 St Jean du Grund enjoys a spectacular riverside position | © Wojtkowski Cezary / Alamy Stock Photo
Erected in 1606, the stylistic appearance currently exhibited by St Jean du Grund dates from 1688–1705 and is characterised by a grand vaulted ceiling, high windows, tall pillars and Baroque furnishings. Though it enjoys a lovely position by the river, it’s the church’s spectacular interior that’s likely to leave you speechless. Although not overly decorated, it is widely revered as one of the most beautiful religious sites in Luxembourg City. Don’t miss the exquisite organ, which dates from the 18th century, and the stunning icon of Madonna, located in the side chapel.

Church
Facebook
Email
Twitter
Pinterest
Copy link
Share
Paroisse du Sacré-Coeur dates back to the 20th century and, though it has a shorter history than many of the churches on this list, nevertheless has plenty to offer the inquisitive traveller. Its interior is comprised of three beautiful naves and one transept. A 10-metre-(32-feet-)high watercolour painting is situated at the bottom of the main choir, a stunning illustration of Christ as he prepares for his crucifixion. The church aims to both help the local community and to give to the underprivileged, and with this in mind it operates a highly successful musical programme in conjunction with several youth associations, and hosts events which raise money for various charities.

Church
Facebook
Email
Twitter
Pinterest
Copy link
Share
Founded by a small group in 1956, the Anglican Church of Luxembourg draws in a wide variety of worshippers of all ages and nationalities. The church is part of the wider Anglican Communion, and services and other activities are in English. It tries to express the depth and diversity of the Christian spiritual tradition, and all are welcome to every mass. The interiors are modern and paired-back, with an abstract stained-glass window on one wall and framed paintings of biblical scenes. Services include Holy Communion (said or sung) every Sunday morning, and Choral Evensong once a month.
Give us feedback