The Most Affordable Ways to See Venice, Italy 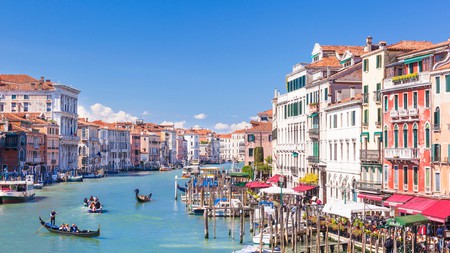 La Serenissima might be known as a glamorous city for the wealthy, but you can still enjoy a taste of la dolce vita on a budget. From affordable places to eat to cheap hotels in Venice, here is our guide to a wallet-friendly stay in this northern Italian city.

Gondolas, bellinis and glitzy hotels spring to mind when you think about Venice, one of the most expensive cities in the word. Yet, by avoiding certain times, and picking the more affordable restaurants and budget accommodation in Venice that many visitors ignore, you can see Venice without winning the lottery. In fact, you’ll see a side of the canal-lined city you might not otherwise have seen.

Venice is an open-air museum you can explore on foot. Expect to get lost and enjoy the opportunity to admire the faded beauty of the canalside palazzi and Renaissance architecture. Seek out as many of Venice’s 400 bridges as possible, from the oldest, the Rialto, to the newest, the arched glass-and-steel Ponte della Costituzione.

Tap into local knowledge by joining a free walking tour bookable online, including an atmospheric night tour of St Mark’s Square. On one side of the square, the domed St Mark’s Basilica is free to get in, but expect queues unless you get up in time for Sunday mass. For views over the piazza and its famous bell tower, nip over to the lofty Museum of St Mark’s with remarkably affordable entry.

It’s a five-minute walk from the train station to the historic Jewish Ghetto in Cannaregio, the oldest in the world, where Venice’s Jewish community was confined in the 16th century. The two synagogues on the island are considered among the most beautiful in northern Italy.

The Venezia Unica City Pass is a hassle-free way to combine and pre-book your airport transfers, entry to museums and attractions – such as the Doge’s Palace, a gothic masterpiece – and save money in the process. 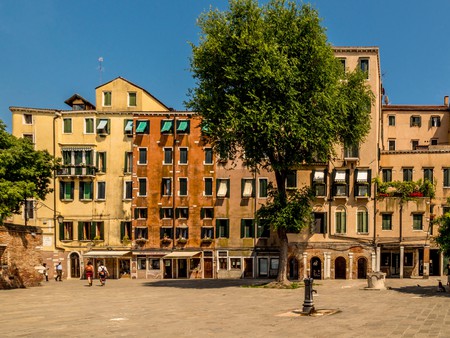 Finding affordable places to eat in Venice is easier than you think. Follow the trolley-pulling locals across the Rialto bridge to the main market in San Polo. Pyramids of seasonal, regional fare from sweet cherries and peaches to white asparagus and radicchio will make the perfect picnic.

Another local option is the bàcaro, a teeny standing-room-only kind of bar serving small plates known as cicchetti and small inexpensive glasses of local wine called ombra in Venetian dialect. El Sbarlefo is one such bàcaro, five minutes from the Rialto Bridge. Alternatively, head to the lively Campo Santa Margherita, where you can sip on spritzes for a few euros alongside local students, who have perfected how to do Venice on a budget.

No one talks about street food in Venice, but it’s here on street corners and in local restaurants. Order scartosso, popular at Acqua e Mais takeaway, a paper cone of mixed fried fish or seafood from the nearby Rialto Market or their vegan-friendly polenta version topped with fried veg.

Part of the unique charm of Venice is that there are no roads. Arriving by train to Santa Lucia railway station, you can walk to Saint Mark’s Square in 30 minutes. Riding gondolas pushed by striped topped gondoliers is a romantic way to sightsee on the water, particularly under the poetically named Bridge of Sighs. However, if you don’t want to pay as much as an airline fare, and this includes water taxis, the ​​vaporetto, or water bus, is a far cheaper way to get around. Alternatively, take the traghetto, the cheaper-than-chips ferry service across the Grand Canal by gondola which you can hop on and off from several spots. 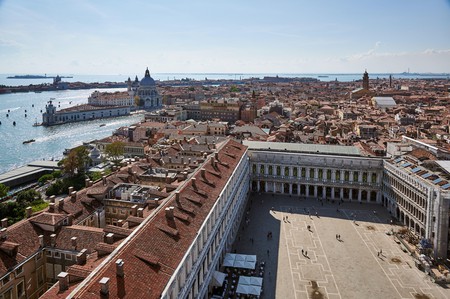 Travel with wheeled luggage and try to pick cheap hotels in Venice not far from a vaporetto stop. Who’d have thought you could stay in a former palace without breaking the bank? Close to the San Stae vaporetto stop in the lesser-known Santa Croce neighbourhood, Al Ponte Mocenigo offers refined rooms with terrazzo floors, beams and delicate fabrics. A breakfast of pastries and fresh fruit is included, which tastes even better eaten in the pretty brick-walled courtyard.

Across the lagoon from San Marco Square, on Giudecca, Generator Venice is a granary-turned-hostel that feels more like a hotel, yet it’s one of the cheapest places to stay in Venice with an off-peak stay in a dorm costing less than a coffee at the 300-year-old Caffè Florian, a Venetian institution.

Then there’s the great outdoors, meaning fresh air and eating al fresco on your portable stove. Along the Riviera del Brenta, a 20-minute drive from Venice, Camping Serenissima is a leafy site with pitches for campervans, caravans and tents. There’s even a low-cost shuttle bus to take you to the centre. 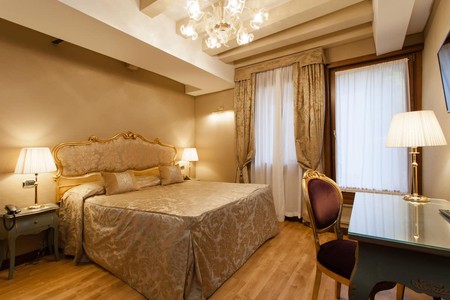 Naturally, the tiny islands swell with tourists in summer and during festivals throughout the year, from Carnival to the Biennale to the film festival, and prices are at their peak. April is warm and sweet-smelling (the canals can be a little pungent during the warmer months), while October is a festival-free month with mild temperatures and thinning crowds. 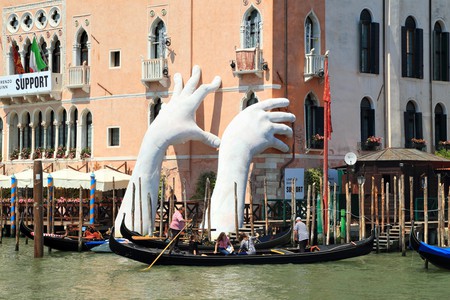 Check out these bed and breakfasts in Venice for more affordable accommodation options, all bookable on Culture Trip.