The 10 Most Beautiful Buildings in Milan 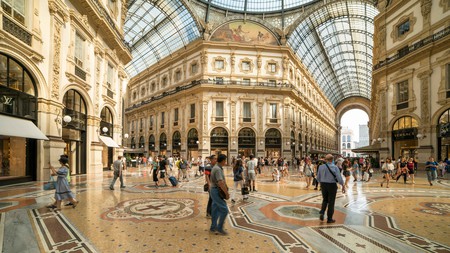 Romanesque basilicas, Postmodern towers and Art Deco wonders all make up the fabric of this fascinating metropolis. Discover the architectural masterpieces that best represent Milan’s spirit. 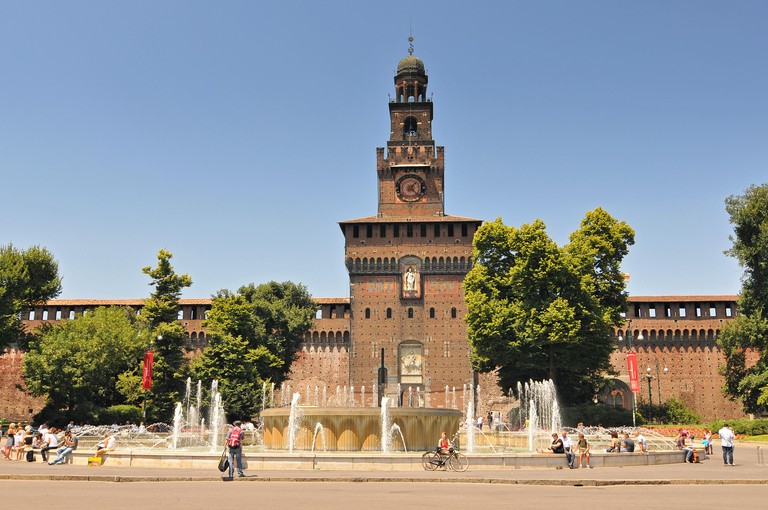 © Wojtkowski Cezary / Alamy Stock Photo
The Sforzesco Castle was built in the 15th century on top of a 14th-century fortress. Over the years, its fate oscillated between demolition and renovation. Despite a painstaking reconstruction by the Sforza family, including the Salla delle Asse (a magnificent hall decorated by Leonardo da Vinci), Napoleon ordered its demolition in 1800. A year later, his army destroyed the Spanish bastions and towers. After years of complex restoration work, today the castle is a splendid symbol of resilience and rebirth. Out of its lush surroundings in the Parco Sempione, the Sforzesco Castle now houses several museums that are open to the public – Leonardo da Vinci’s hall included.
Open In Google Maps
Piazza Castello, Milano, Lombardia, 20121, Italy
+390288463700
Visit Website
Visit Facebook page
Give us feedback 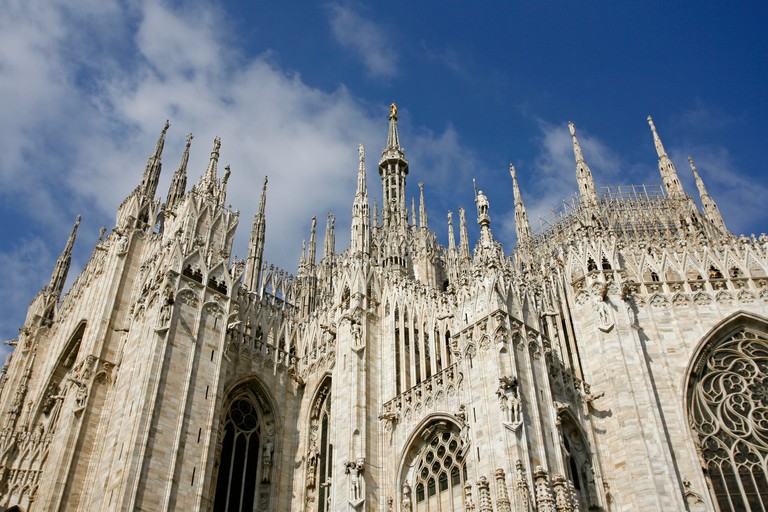 © Glyn Thomas / Alamy Stock Photo
Book Now
This Italian Gothic cathedral that sits at the centre of the city took six centuries to build, so it’s worth spending at least a couple of hours admiring the architecture. Flying buttresses, pinnacles and spires make up its ornate exterior and invite visitors to take a closer look. Once you’ve snapped the obligatory pic in front of the intricate marble facade, head up to the roof for the best views in the city, and get up close with your pick of the 135 spires and 3,400 statues.
Open In Google Maps
Piazza del Duomo, Milano, Lombardia, 20122, Italy
+390272023375
Visit Website
Visit Facebook page
Give us feedback 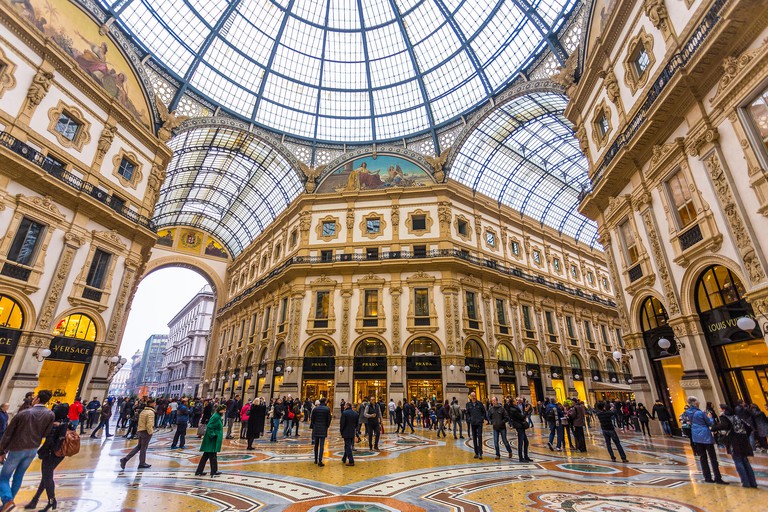 © Horizon Images/Motion / Alamy Stock Photo
Book Now
Spanning four stories and topped with a glass-vaulted roof, this 19th-century arcade is the height of elegance in the heart of the city. The impressive shopping structure actually comprises two arcades, which intersect to form an octagon. Check out the frescoes up above and the mosaics down below, showing the coats of arms of the three Kingdoms of Italy. If you’re wondering why there’s a hole in place of the Turin bull’s testicles, tradition states that planting your heel on said testicles and spinning three times will bring you good luck.
Open In Google Maps
Piazza del Duomo, Milano, Lombardia, 20123, Italy
+390288455555
Visit Website
Give us feedback 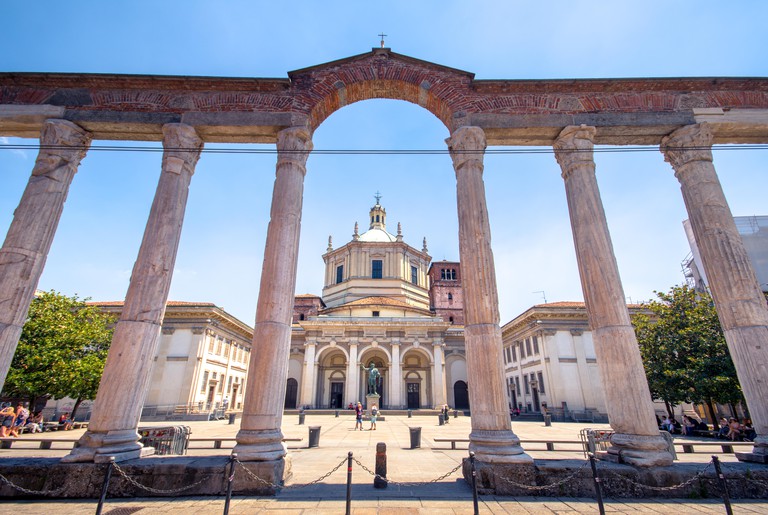 In the thick of a busy shopping street, you’ll find these ancient Roman ruins that have somehow survived the bouts of destruction that pepper Milan’s history. Comprising 16 Corinthian marble columns, the colonnade was most likely transported to its current location from a pagan temple or public bathhouse. Until 1935, it joined onto a row of houses that separated the columns from the Basilica of San Lorenzo, but these were demolished to make way for an open square. Today, they act as an imposing backdrop where you catch up with friends, sing along with a busker or pause for gelato. 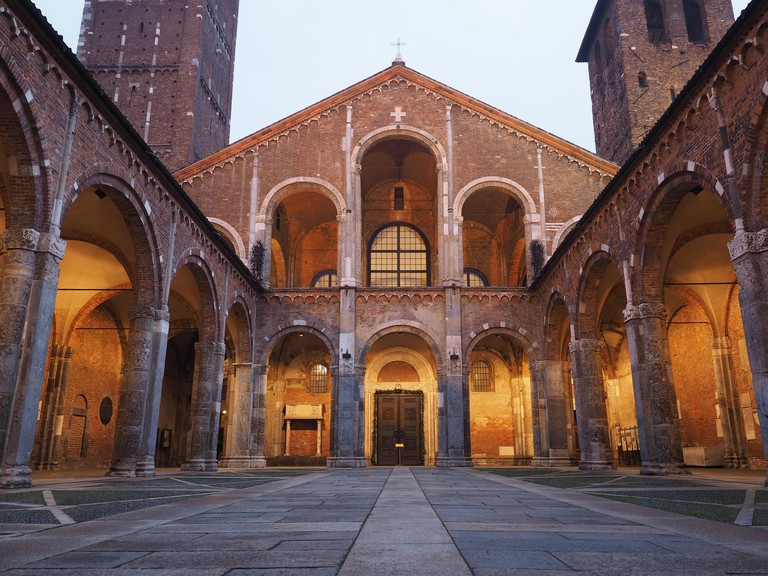 Dating back to the fourth century, the Basilica of Sant’Ambrogio is one of the city’s most sacred locations. Comprising a mix of architectural styles that tell of its many renovations, its current appearance is Romanesque in design, with semi-circular arches throughout and galleries above the side aisles. Intriguingly, monks and canons shared the building. However, they didn’t always get along, so they each had a cloister and tower. The two towers that define the structure symbolise this division. 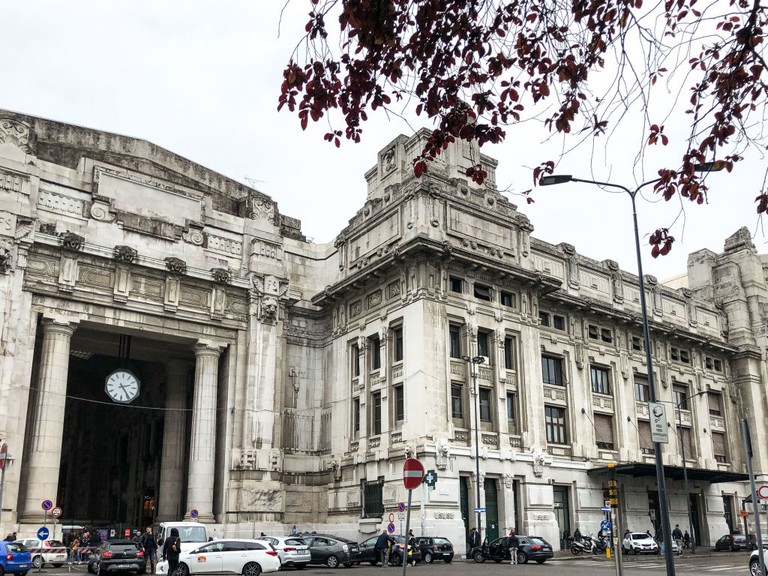 Milano Centrale railway station is a majestic symbol of power | © OnlyPhoto / Getty Images
Many visitors have probably rushed through here to catch a train at some point, but it’s worth spending some time observing the central station’s architecture. A mix of styles (including Liberty and Art Deco) influences the barrel roof, pilasters and reliefs decorating the walls. When Mussolini became Italy’s prime minister in the 1920s, he wanted the station to represent the power of the fascist regime. These days, much of the fascist symbolism has either been removed or covered up, although its monumental size and bombastic sculptures give away his intentions.
Open In Google Maps
1 Piazza Duca d'Aosta, Milano, Lombardia, 20124, Italy
Visit Website
Give us feedback

Building
Facebook
Email
Twitter
Pinterest
Copy link
Share
Map View
Looming over its neighbours at 100 metres (328 feet) high, the Torre Velasca is instantly recognisable for its distinct shape. The concrete mushroom tower – constructed in the 1950s – is wider at the top like a Medieval watchtower, making it a modern interpretation of ancient architecture and, in turn, embodying Milan’s very identity. Striving for innovation yet firmly rooted in its history, the city looks to its past to move forward, and the Torre Velasca is at the centre of this movement.
Open In Google Maps
5, 3 Piazza Velasca, Milano, Lombardia, 20122, Italy
+39020202
Visit Website
Give us feedback 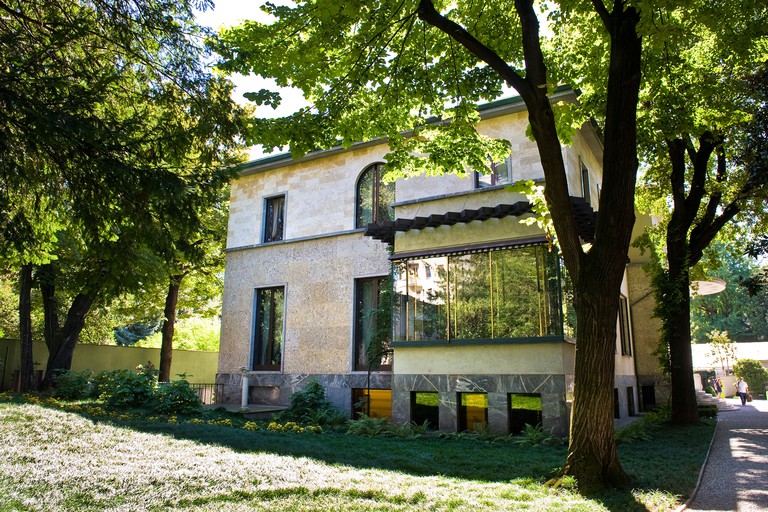 This domestic residence is an architectural masterpiece designed for throwing lavish parties for the Milanese elite. Make your way across the manicured lawn towards the outdoor pool bordered by pink, yellow and red tulips. Upon entering the house through a pair of silver sliding doors, visitors are greeted by a marble staircase with gold detailing on the bannister. Tread the walnut floors and discover the early-20th-century Italian art in every room. Make yourself at home in the sumptuous surroundings of a 1930s Art Deco icon.

The ‘Vertical Forest’ is a pair of skyscrapers covered in as many trees as could be planted in a hectare of land. It aims to tackle Milan’s pollution problem by combining high-density residential development with the planting of more trees in the city centre. By creating a biological habitat that purifies the air and adds some much-needed greenery to the landscape, the project creates homes not just for its human inhabitants but also a whole ecosystem of plants, bugs, birds and butterflies.

Open In Google Maps
Milan, Lombardy, 20124, Italy
Give us feedback 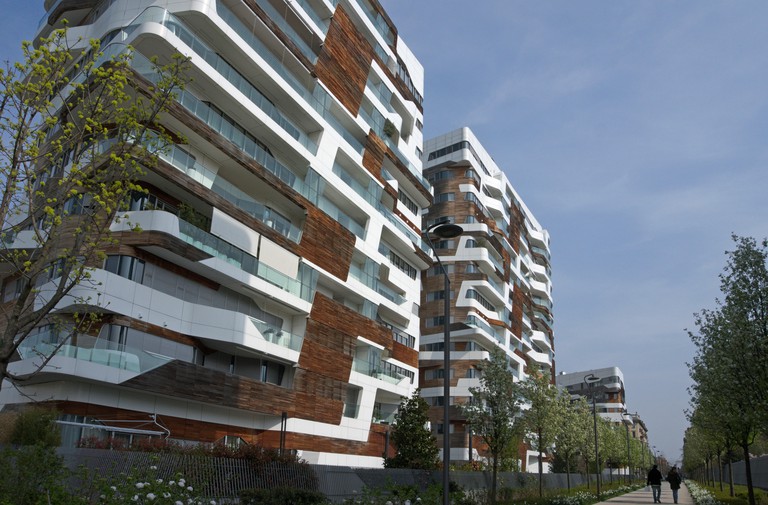 These apartments are a design feat, allowing residents to live in better harmony with nature | © saturno dona’ / Alamy Stock Photo

CityLife is Milan’s newest district, situated a short ride away from its historic centre. With a focus on pedestrianised areas and vast green spaces, the neighbourhood promises a better place to live and work. Although much of it is still under construction, the residential complex by Zaha Hadid is complete, and the celebrated architect’s signature style is evident. Comprising seven curved buildings of varying heights, complete with fluid lines and organic forms accented in natural wood panelling, the apartments make the most of their natural surroundings.