The Best Things to Do in Lampedusa, Italy 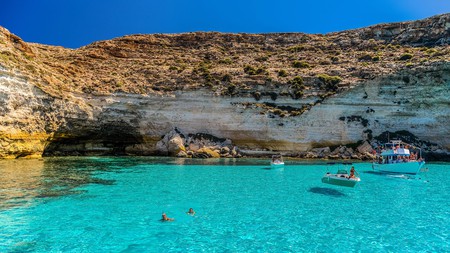 The idyllic island of Lampedusa, Italy, is best known as a beach destination, but there’s much more to see here. Put away your beach towel for a few hours and explore the museums, wildlife spots, WWII relics and natural wonders like the natural swimming pool at La Tabaccara.

Lampedusa – an isolated, 21sqkm (8sqmi) Pelagie Island – lies between Sicily and Tunisia’s east coast. Historically, settlement here was problematic not just because of its remoteness but also due to nomadic pirates dominating the Mediterranean. Today, people rave about Lampedusa’s white-sand beaches and turquoise waters. But gorgeous beaches and enviable climate aside, there’s much to distract you during a stay in Lampedusa, including archaeological treasures, wildlife-filled nature spots and a turtle rescue centre. Here’s our pick of the best attractions in Lamepdusa, Italy.

Be welcomed by the Madonnina del Mare

Not to be confused with La Madonna del Mare, a bronze Madonna and child statue under the surface of Lampedusa’s crystal waters, the Madonnina del Mare is a human-sized figure in the shade of a rock outcrop at Cala Madonna. Wearing a long, light blue coat, the Madonna guards the cove with her arms open, true to the idea of Lampedusians who consider her the island’s protector. Enclosed by two rocky, barren headlands, this bay has a quiet, reverent atmosphere that’s perfect for spending a day in the sun and dipping toes in the aquamarine shallows. 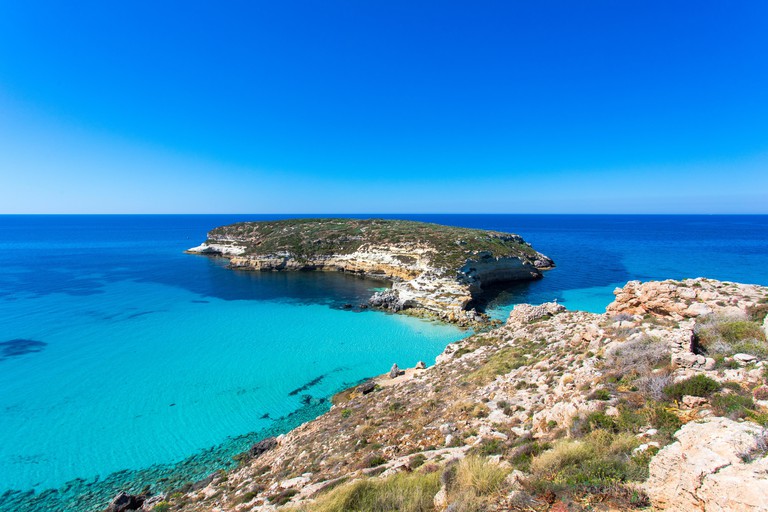 © Giacomo Scandroglio / Alamy Stock Photo
Home to screeching herring gulls, nesting loggerhead turtles and dashing rock lizards, Isola dei Conigli (Rabbit Island) is a tiny rocky islet just off Lampedusa’s southwest coast and part of a protected natural reserve. Legend says the island’s name derives from either the first nautical chart from 1824, when rabit – an Arabic word for “connection” – referred to a land bridge, or from the rabbits trapped there when water covered Rabbit Island’s isthmus. Either way, it’s a stunning setting for snorkelling or diving in warm, calm waters. 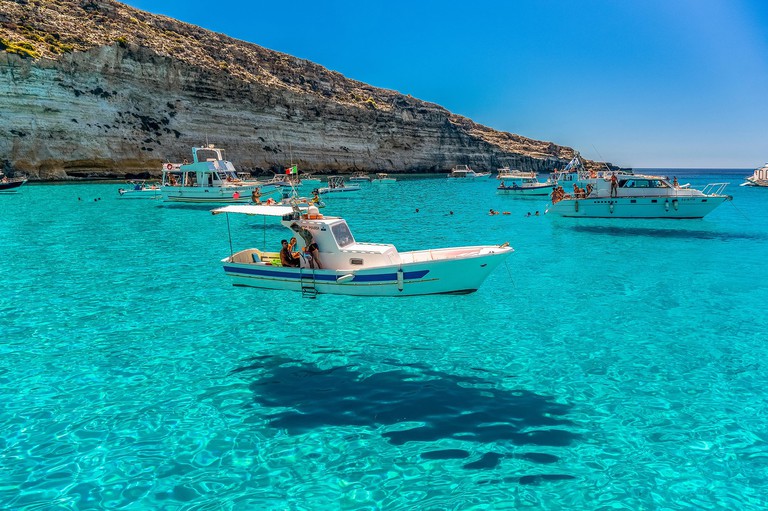 © Realy Easy Star / Tullio Valente / Alamy Stock Photo
Off Lampedusa’s south coast and a stone’s throw from Rabbit Island, this saltwater pool probably owes its name to the tobacco and cigar traders who conducted business inside Tabaccara’s sea cave. Also referred to as the Natural Pool of Lampedusa, La Tabaccara’s water is so transparent that anchored boats in the pool look as if they’re flying. The path towards Rabbit Beach makes for once-in-a-lifetime photography of the seemingly floating boats.

Brush up on history at Museo Archeologico delle Isole Pelagie

Eager to learn about Lampedusian history? Head to the Archaeological Museum of the Pelagie Islands. Snuggled into Salina Bay in the island’s southeast, where the castle of Lampedusa once stood, this museum documents humanity’s presence in Lampedusa. Set in what resembles an apartment block with U-shaped stairs, it houses items of the early Bronze Age, showcases fish processing techniques during Roman times and gives a glimpse into the everyday life of ancient settlements and Neolithic culture. History buffs can even buy artefacts. 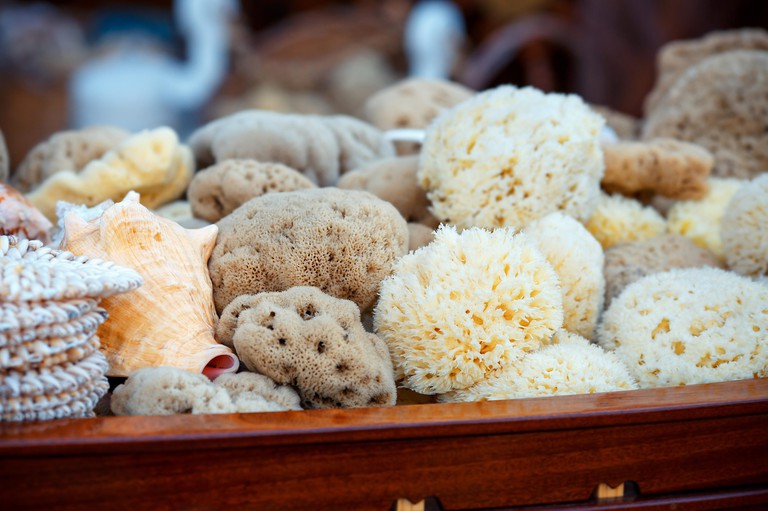 © Vladislav Zadjko / Alamy Stock Photo
A sponge’s throw from Lampedusa’s archaeological museum, you’ll find this natural sponge shop. Lampedusian fishers have been collecting sea sponges for centuries, and in the industry’s heyday, even Greek, Dalmatian and Tunisian fishermen were keen to sell them to Mediterranean wholesalers. The natural sponge industry, discovered and started by a Sicilian, sparked huge hope in 1870 among farmers and pastors looking for a route to prosperity, but suffered a drop in demand when synthetic sponges appeared.

Lampedusa was a strategic location for the control of the central Mediterranean’s supply routes during WWII. Visit one of the numerous bunkers dotted around the island, particularly in Lampedusa’s southeast, and you’re transported back in time. Exploring the restored port bunker, a circular concrete case mate covered with quarry stone, you can imagine the terrifying sounds of whistling bombs that once plagued this paradisiacal island.

Pitch in at Lampedusa Turtle Rescue 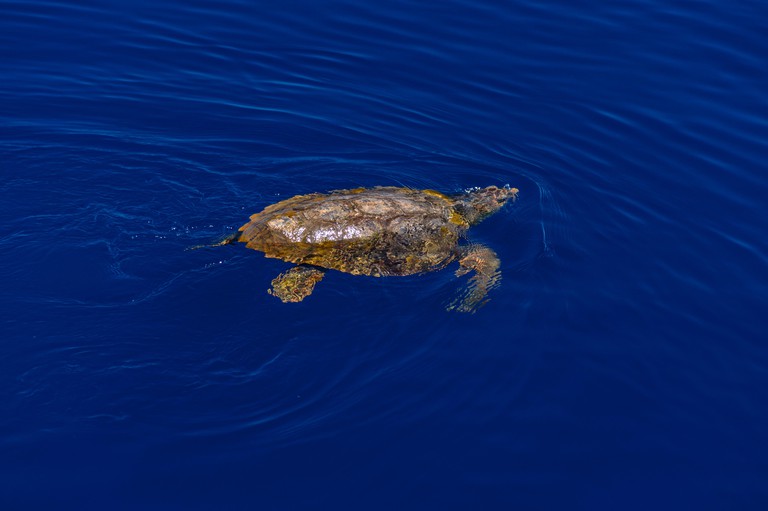 © mauritius images GmbH / Alamy Stock Photo
Want to give back? At Lampedusa’s southeasternmost point, the Turtle Rescue leans exclusively on volunteers and helps some 100 turtles per year. Fishermen often capture them accidentally with longline hooks or trawling nets and bring them to the turtle hospital, where they can recover from injuries before they’re released. Turtle conservation also means protecting their nesting sites. In a bid to save this endangered species from extinction, Turtle Rescue brings people together who have something in common: a love for wild animals.

Looking for more? With countless reasons why you should visit Lampedusa – including its most beautiful beaches – make sure you stop off at one of the best restaurants for a greater taste of the island. And with plenty of choices for a place to stay, book into one of the best hotels in Lampedusa with Culture Trip.