The Most Beautiful Beaches in Lampedusa, Italy 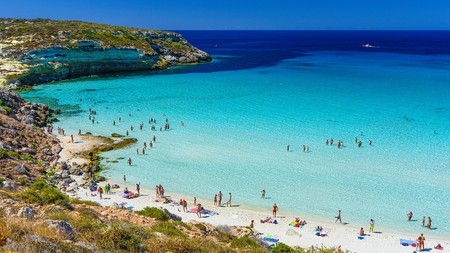 Lampedusa, one of Italy’s Pelagie Islands in the middle of the southern Mediterranean, is actually closer to Tunisia than Sicily. Uninhabited for centuries, today it’s a thriving summer destination best known for its heavenly sands. Lounge around on Rabbit Beach or venture out to tiny coves only reachable by foot – here’s our pick of the beaches you’ll want to explore. 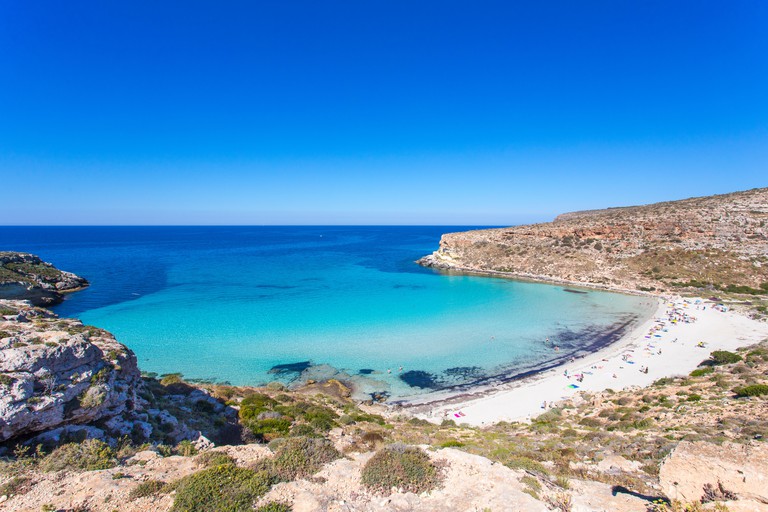 Snuggled in a sheltered bay in the southwest of the island, and girdled by rocky cliffs overgrown with maquis (a Mediterranean coastal shrub) Rabbit Beach has a remote feeling despite its easy access. With its impossibly fine white sands and turquoise shallows, it’s little wonder that Rabbit Beach – which takes its name from the furry inhabitants that once lived here – has been voted best beach in the world. Rarely too crowded, this cove makes for peaceful me-time as the tranquil, clear waters lap ashore. 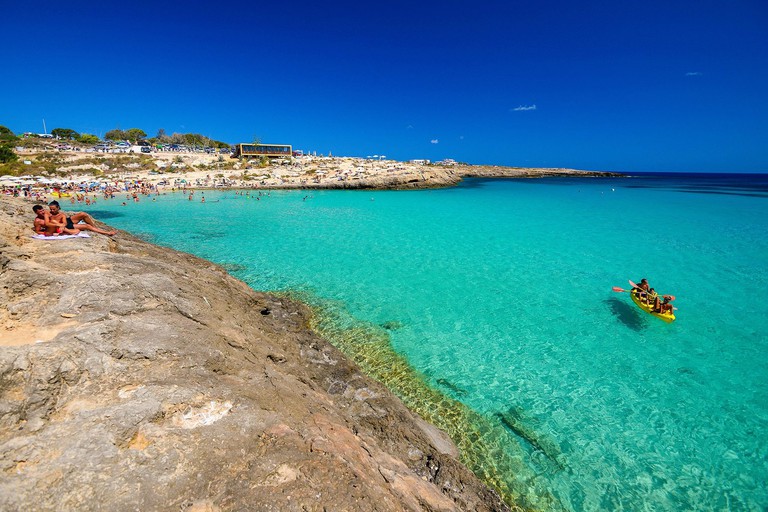 © Realy Easy Star/Tullio Valente / Alamy Stock Photo
A sun-bleached cove framed by an explosion of shrubs and spiky agave trees, Cala Croce is just as idyllic as Rabbit Beach. Easily reachable from nearby Cala Guitgia, it’s comprised of two white sand inlets plus a rocky one. Croce is dotted with colourful recliners and stripy umbrellas, enticing sunseekers into lazy afternoons soaking up hot rays. You can curl up for a kip on the silky sands, fuel up on seafood pasta topped with fat red prawns at the beach restaurant, or take a dip in the shallow, Bora Bora-like waves.

Have you ever seen a port beach with crystal waters and white sands? This is Cala Guitgia, which easily ranks among Lampedusa’s most beautiful beaches. Steps from the town, and with plenty of shops and restaurants, Guitgia has rock-framed sands that stretch for some 200m (650ft) plus around 400 sunloungers shaded by coconut palm umbrellas creating a tropical atmosphere. Always packed with kids and teenagers, the well-maintained city beach retains a sense of peace only interrupted by the squawking herring gulls that live here too. 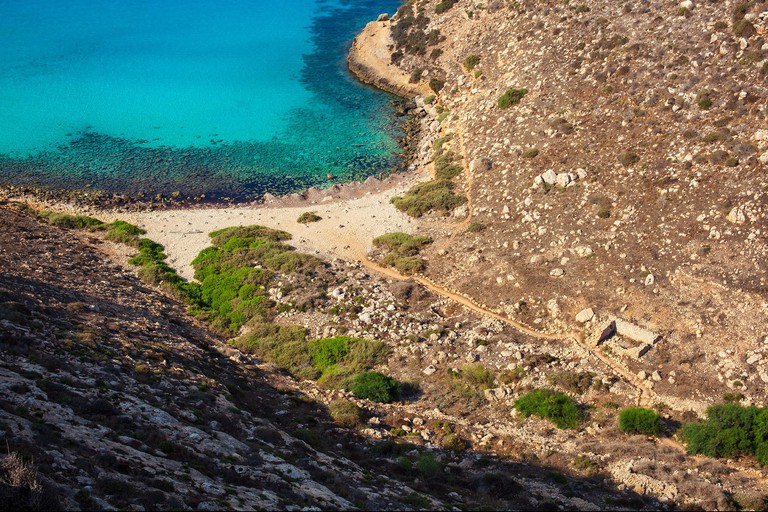 © Giuseppe Anello / Alamy Stock Photo
Tucked away in a nature reserve in Vallone della Forbice, Cala Pulcino lacks the bright white sands of its blockbuster neighbour, Rabbit Beach – but with its turquoise waters surrounded by maquis-tufted hills, this secluded beach is a piece of paradise. Only accessible on foot, the rugged, wild and untouched cove gives off a castaway feel. Listen to the soothing sounds of ocean waves rolling gently onto the stones, or take an invigorating dip in the crystalline sea.

A narrow cove between two tumbling headlands, the inlet of Cala Greca hides in Lampedusa’s south coast, close to the Rock Village camping site. This tiny stretch of light brown sand lapped by warm waters is framed by spiky agave trees and purple flowers that defy the barren cliffs. Getting here requires a scramble around craggy rock formations surrounding the campsite, yet the beach can still get crowded. Sporting translucent green waters and dark blue seas, Cala Greca is popular with snorkelers and loggerhead turtles that thrive in its delicate ecosystem. 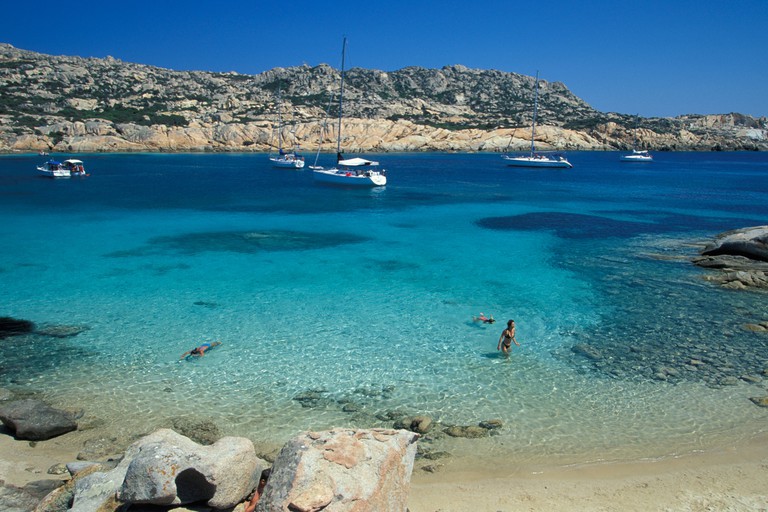 © Ingolf Pompe 70 / Alamy Stock Photo
Cala Francese’s fame is largely thanks to Italy’s former Prime Minister Silvio Berlusconi, who bought a villa right behind it. At times crowded and windy, this barren, rock-framed beach on Lampedusa’s southeast coast is occasionally assaulted by powerful waves delivering thundering blows. But when the sea relents you can bathe your toes in the biscuity sand, and watch the calm, turquoise ocean glistening like it’s studded with diamonds. There’s a handy car park, and umbrellas and recliners are available for rent in peak season too.

Natural Feature
Facebook
Email
Twitter
Pinterest
Copy link
Share
Map View
Sitting in the lap of Cala Croce is the baby beach of Portu ‘Ntoni. If a tiny stretch of white sand framed by cliffs and lapped by warm, green-blue waters isn’t reason enough for you to come here, then the sunset from the restaurant of the same name should be. With a cold sangria in hand, you can watch the skies turn pink while you devour fresh fish, paella or couscous with grouper – a mild, sweet fish that’ll have you planning a return trip before you’ve even paid the bill. 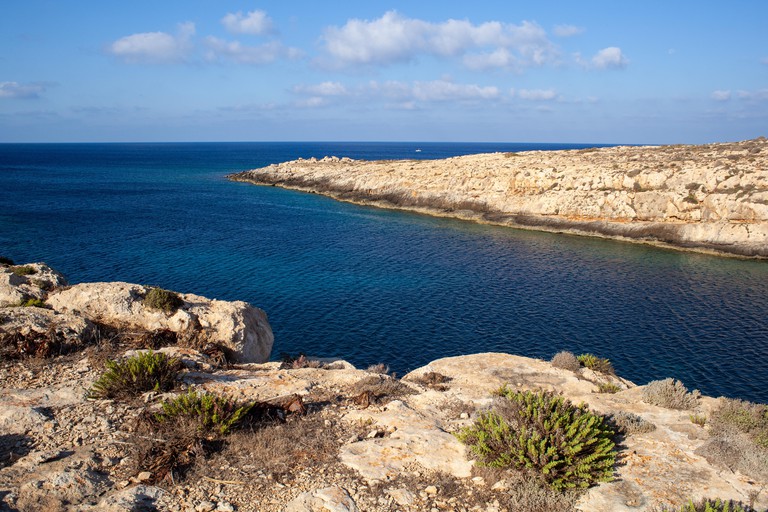 © Ingolf Pompe 70 / Alamy Stock Photo
Naturally tailored to both thrill and tranquillity seekers, hidden away in a southern valley within a nature reserve, Cala Galera is protected by dramatic walls of cruise ship sized, maquis-covered cliffs. You’re bound to have this wild side to yourself, as few people venture here, as the tough-going nature trails are barely signposted. Once you’ve navigated your way down, you’ll be rewarded by clear, emerald seas sliding and sloshing between caves stashed away in the mouths of stark rocks. Recharge your batteries on the light-coloured sands and stones.

Looking for more? With countless reasons why you should visit Lampedusa – including its top things to do – make sure you stop off at one of the best restaurants or bars for a greater taste of the island. And with plenty of choices for a place to stay, book into one of the best hotels in Lampedusa with Culture Trip.