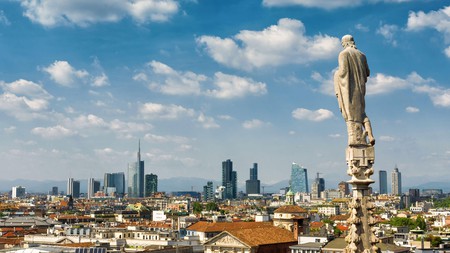 From the rooftop of the Duomo, you can see the modern skyline of the Porto Nuovo, Milan's business district | © Vyacheslav Lopatin / Alamy Stock Photo

Charming yet undeniably gritty, Milan is the wealthiest, most stylish city in Italy; a perfect example of old-world romance meets urban steel.

In a country packed with natural wonders, Milan may often be overlooked. Yet those who know Italy well would never dare skip a visit to the fashion, food, architecture and art capital of the country. Whether you’re looking to eat, drink, sightsee or shop, here you can discover where to find experience Milan like a local. Let’s take a look at some of the top reasons to visit Italy’s northern powerhouse.

If you’re the kind of person who loves to wander off the beaten path while still having plenty of entertainment options and amenities, Milan is for you. It’s a city that thrives on business, so you’ll find professional and working-class Milanese just going about their lives, with a much higher ratio of locals to tourists and an excellent underground system to get around. Roam the fabulous streets and pretend you’re a resident of this world-class city. 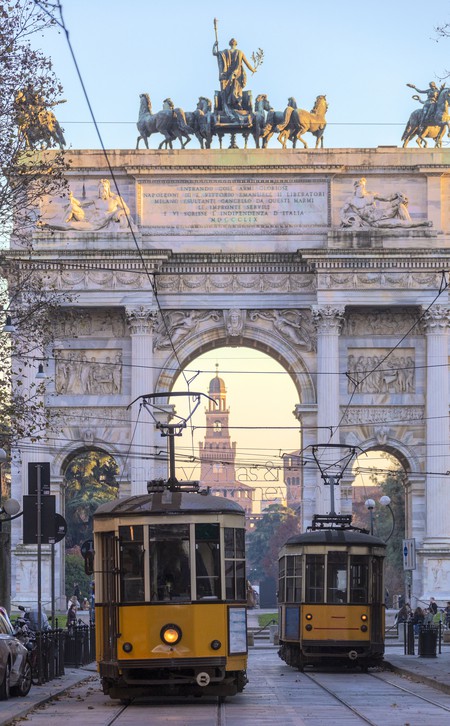 Milan’s trams, seen here travelling down the Arco della Pace with Castello Sforzesco in the background, are a great way to sightsee | © Francesco Bergamaschi / Getty

The abundance of diverse and stunning architecture

Milan’s illustrious history and modern status as the financial hub of Italy means there is a profusion of magnificent buildings, contributed over centuries by the world’s best architects. Unlike many other cities in Italy that are dominated by one particular architectural period – such as medieval Bologna or Siena – Milan has exemplary architecture from many epochs, from Renaissance to neoclassical.

Buildings range from the Renaissance-style Santa Maria delle Grazie church (which has a fun optical illusion and is designated a Unesco World Heritage Site) to the 19th-century shopping plaza, the Galleria Vittorio Emanuele II. There are also art-nouveau townhouses with geometric stained-glass windows, detailed floral motifs and ornate metalwork in Porta Venezia, as well as the sweet yellow case di ringhiera, traditional workers’ houses in the Navigli and somewhat scattered throughout the city. While not the most obviously attractive building, brutalist icon Torre Velasca is hard to miss and is a post-war example of strength and rationalism ideals in Italy at the time. For a modern masterpiece, check out the Bosco Verticale (vertical forest), a metropolitan reforestation project devised to regenerate urban biodiversity with more than 800 trees, 4,500 shrubs and 15,000 plants covering the luxury apartment buildings. 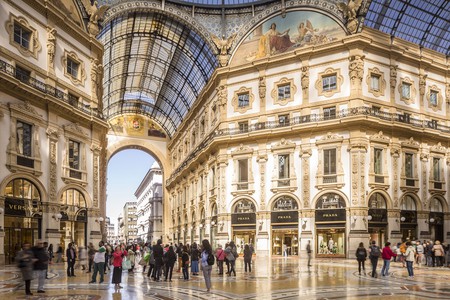 Over the years, Milan has been at the centre of some significant European art movements, including the 14th-century gothic style under the Visconti family, and futurism at the beginning of the 20th century; this is reflected in the quality and breadth of the city’s museums and art galleries. Home to one of the most famous Renaissance paintings in history – Leonardo da Vinci’s The Last Supper (1494-1498) — as well as unrivalled collections of Italian modernism, including masterpieces from artists such as Umberto Boccioni and Lucio Fontana, Milan is a city where you could spend a lifetime going in search of famous art. 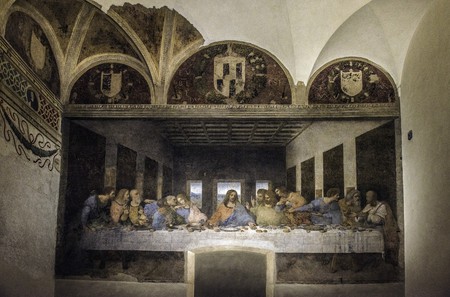 The food in Milan draws on the bounty of its surrounding mountains, coasts, lakes and verdant farmland. The dishes are typically rich and hearty, with meat, pasta and rice taking centre stage. Make sure to sample traditional Milanese favourites such as risotto alla milanese (saffron risotto), cotoletta alla milanese (breaded veal cutlet) and at Christmastime, the world-renowned panettone (sweet fruit loaf).

For aperitivo in the city of its origin

It is widely believed that the aperitivo was invented by the creator of vermouth in Turin in the 18th century. However, the concept of aperitivo hour didn’t take off until the 1920s in Milan, where rumour has it that Gaspare Campari started mixing the types of cocktails now synonymous with the Italian version of happy hour. 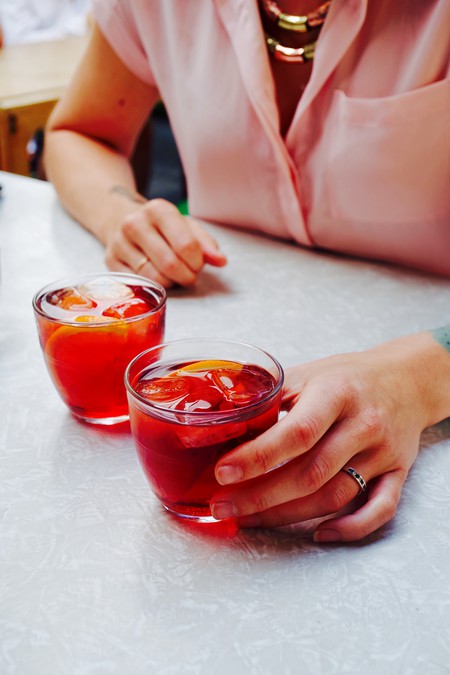 The negroni cocktail, made from gin, vermouth and Campari, was invented in Milan | © Trine Wahlmann / Getty

While the ritual of aperitivo can be enjoyed across Italy, it’s undeniable that the Milanese do it best. Between 6pm and 8pm, having clocked off work, the entire city seems to be grabbing a drink and complimentary snack before heading home or out for dinner. For a low-key experience, make like the locals do and stand at a cafe counter, drink in hand, as you nibble on crisps and olives. Or go grand and settle in for a night of delicacies at any of the countless stylish bars serving drinks alongside a feast of cured meats, cheeses and focaccia.

To stand on the roof of a cathedral

Every major European city has a famous architectural site: the Eiffel Tower in Paris, Big Ben in London. In Milan, it is the majestic Duomo. Situated smack bang in the centre of Milan, the imposing gothic cathedral is the largest and most elaborate in Italy, enveloped in pink-tinged white marble sourced from the quarries of Lake Maggiore. Construction of the building began in 1386 and took nearly six centuries to complete. Visitors to the Duomo can climb up to the rooftop, where you can take in a sweeping view of the city, as well as get a close-up with the menacing gargoyles and intricate spires surrounding you. 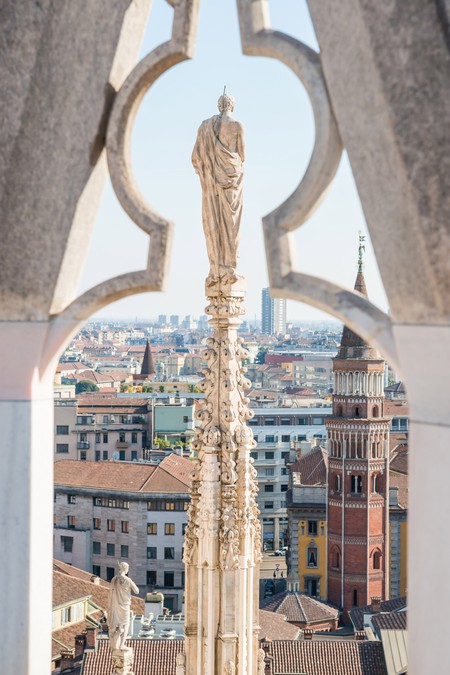 Rome might hold all the secrets to Italy’s ancient history, but to delve into its more recent past, Milan can’t be rivalled. Once reminders of the oppressive regimes that dominated Milan, the Royal Palace and Castello Sforzesco provide a useful insight into the age of the commune and the medieval dynasties that ruled and feuded in Lombardy and beyond. An afternoon at Museo del Risorgimento explains the Italian Unification – the period of Italian history between the first campaign of Napoleon Bonaparte in Italy (1796) and the annexation of Rome to the Kingdom of Italy (1870). Traces of Mussolini’s fascist regime remain in Milan in the form of imposing architecture spread across the city – Milano Centrale train station is one of the most remarkable examples.

For its fashion and design heritage

The epicentre of Italian fashion and design, Milan is home to the biggest names in the industry – Valentino, Versace, Prada, Dolce & Gabbana, Armani and Missoni (to name just a few), as well as a new pool of talented emerging brands such as La DoubleJ. Since the early 1900s, Milan has also cemented its reputation as a trendsetter in interior and furniture design. When Salone Internazionale del Mobile di Milano first launched in 1961, Milan became a hub for designers, with showrooms, studios and outlets opening their doors to international buyers. For those keen to learn more, the Triennale Design Museum offers a comprehensive look into the history of design in Italy. 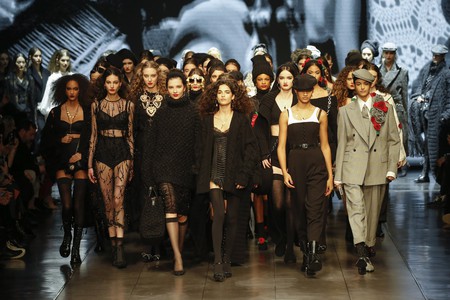 To watch an opera at La Scala

You don’t have to be an opera buff to enjoy a visit to the Teatro alla Scala. The extraordinary theatre was originally built in the 1770s but later had extensive reconstructions after heavy bombings. Swathed in red velvet, brocade and gold mouldings, the spectacular performance hall is one of the most lavish in the world. Since its days hosting celebrated composers Gioachino Rossini and Giuseppe Verdi, La Scala has welcomed a variety of international performers and conductors – as well as dancers, actors and singers – to its stage.

To ride a design icon – the Milan tram

The yellow tram has always been a famous symbol of Milan. While the vehicles have been replaced and updated over the years, many of the trams running throughout Milan today are versions of the original 19th- and 20th-century designs – and you can even hitch a ride using your normal public transport ticket. The trams feature a bright-yellow carriage with a shining wood-panelled interior. Long benches line the inside, with glass lamps dotted along the ceiling and curtained windows tied with sashes. Hop on and enjoy the city at a slower pace – you will be transported back to a bygone era as you meander through the streets. 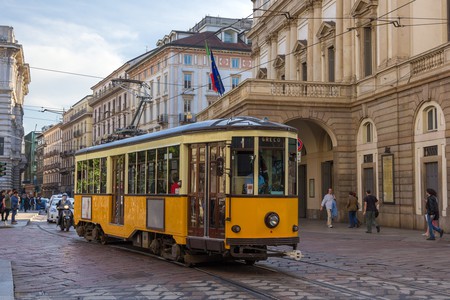 Boasting an amazing rail network connecting northern Italy and Switzerland, Milan is the perfect jumping-off spot to explore, whether for day trips or continuing on your travels. Swim in the sparkling waters of Lake Como after less than an hour’s travel; reach cured-meat heaven Parma, Romeo and Juliet’s birthplace Verona, the expansive Lake Garda or sample Turin’s exceptional wine in two hours or less. What’s more, you can get to Venice in just under three hours. If you extra have time on your hands, take a trip to the Alps or Dolomites for skiing in winter or hiking in summer.

Heading to Milan? Check out the city’s top attractions, as well as the coolest neighbourhoods in Italy’s northern capital. Looking for a place to stay? Book directly with Culture Trip from our pick of Milan’s best hotels. We’ve also got some top recommendations of places to stay at boutique hotels, wallet-friendly accommodation and luxury hotels. You can also enjoy a guided foodie tour of Milan as part of Culture Trip’s action-packed 10-day Northern Italy adventure, led by our local insider.

This is an updated version of a story created by Raphaele Varley.