The Most Spectacular Places to Cycle in Ireland 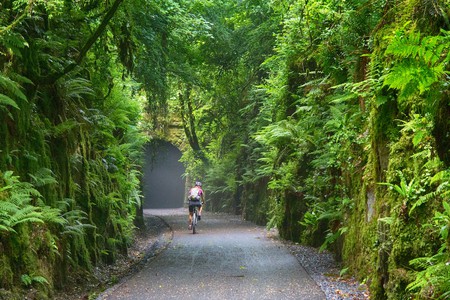 Cyclist on the Waterford Greenway, the longest off-road walking and cycling experience in Ireland | © Patrick Browne / Courtesy of Visit Waterford

Although Ireland’s capital features among the world’s top 20 bike-friendly cities according to the Copenhagenize Index 2015*, the ultimate places to cycle in Ireland are definitely in the countryside, where the fabled scenery and crisp, fresh air can best be enjoyed. Much of its dramatic seacoast forms part of the EuroVelo network’s beautiful Atlantic Coast Route, while upland areas such as the Wicklow Mountains National Park provide a challenge along with the view. Try one of these routes for guaranteed happy cycling.

*It’s worth noting that some Irish cycling publications have argued that Dublin doesn’t actually deserve this ranking.

The world’s longest defined coastal driving route, the Wild Atlantic Way stretches some 2,500 kilometres (1,553 miles) from Malin Head in County Donegal to Kinsale, County Cork. Taking in the entire west coast of the country – as well as much of the north and south – this is an ambitious undertaking best suited to hardcore cycling enthusiasts with some time to spare. According to IrelandWays.com, experienced cyclists can expect to cover the entire route in 25 days.

Those who choose to undertake the complete trail along the rugged western coastline will witness incredible views of some of Ireland’s most beautiful areas, such as Connemara, The Burren and the Ring of Kerry. They’ll also have the opportunity to stop off at spectacular natural attractions, such as The Cliffs of Moher, at various points along the way.

But if you haven’t got the time to do the whole thing, the Wild Atlantic Way can easily be divided into shorter cycling sections, such as the one below. 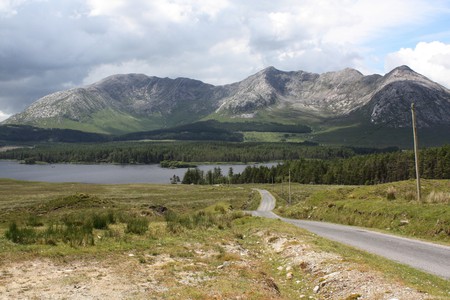 Until recently, the 42-kilometre (26-mile) Great Western Greenway was Ireland’s longest off-road walking and cycling track. It may have been knocked off the top spot in terms of length earlier this year, but this trail is still one of the most picturesque and best-loved areas for biking in the country. Part of the National Cycle Network and the County Mayo stretch of the Wild Atlantic Way, it won the European Destinations of Excellence award in 2011.

The full trail runs along the former railway line from Westport to Achill, flanking the scenic coast of Clew Bay and overlooked by the mountain and pilgrimage site of Croagh Patrick. Within that, the track splits into three sections – an 11-kilometre (seven-mile) stretch connecting the towns of Westport and Newport, 18 kilometres (11 miles) joining Newport and Mulranny, and the 13 kilometres (eight miles) from Mulranny to Achill Island, crossing the Michael Davitt Bridge.

Achill is the largest island off the Irish coast and home to historical sites, such as the castle of the pirate queen, Grace O’Malley. The island is also known for its pristine beaches and lush landscapes. All three sections of the Great Western Greenway are deemed suitable for people with moderate levels of fitness.

Beginning in the tourist town of Kenmare, this moderate 60-kilometre (37-mile) coastal cycle route takes in much of the beautiful Beara Peninsula. Containing part of the boundary between counties Cork and Kerry, the headland looks across Kenmare Bay to the Iveragh Peninsula in the north and over Bantry Bay to the south.

A tarmac route with two inclines, the track begins with the pleasant journey south across the peninsula and through the Glengarriff Woods Nature Reserve. From Glengarriff, bikers can choose to island hop to Garnish Island if they wish to explore the famous gardens there or continue on the trail along the southern coast of the peninsula to the village of Adrigole and on to Castletownbere, enjoying panoramic views of Bantry Bay and its other islands along the way.

Those seeking a more challenging journey can opt to add in an inland detour at Adrigole, travelling through the Caha Mountains along the Healy Pass. The extra effort and the hour and a half added onto the trip will be more than balanced out with breathtaking vistas – it’s one of the most beautiful roads to cycle in the country.

Other cycling high points of the Wild Atlantic Way include Donegal’s Inishowen 100 route and the Ring of Kerry. 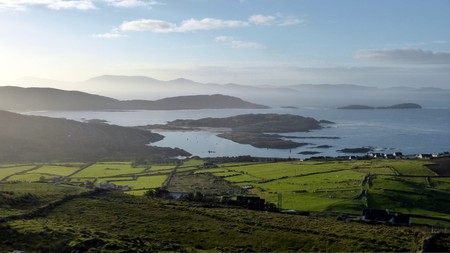 With its last section only having opened to the public in March, the Waterford Greenway is Ireland’s newest dedicated off-road walking and cycling track, and also its longest, at 46 kilometres (29 miles).

Another former railway track-turned-amenity, this mostly flat greenway connects Waterford city to the harbour town of Dungarvan, with multiple attractions to visit along the way, including a ruined Norman castle and an 18th-century Georgian mansion with award-winning gardens.

But some of the best views along the trail can be seen cycling the final stretch towards Dungarvan, after crossing over the Ballyvoyle viaduct and as you pass by the long blue flag beach known as Clonea Strand. 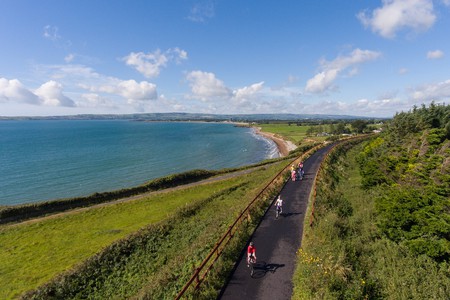 This challenging upland trail cuts through the famously scenic County Wicklow countryside, beginning in Rathdrum village and passing through the Wicklow Mountains National Park. With 1,130 metres (3,707 feet) of climbing, it takes cyclists through the Glendalough valley and monastic site – one of Ireland’s best-known attractions.

A total distance of 75 kilometres (46 miles), the track then crosses the Wicklow Gap – one of only two east-west roads through the Wicklow Mountains – before veering north by the shore of Blessington Lake. As cyclists make their way towards Dublin, they will see bird’s-eye views of the capital city spread out below. 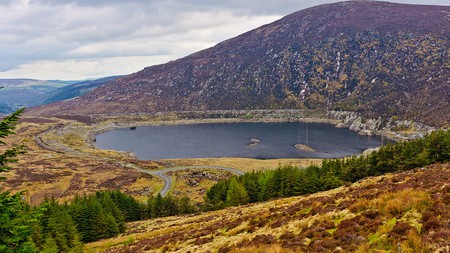 Travel writer Nicola Brady is just one of many to recommend County Down’s Mourne Mountains as among their favourite Irish cycling locations – she cites the fact that the locale, and its unique beauty, helped inspire the author C.S. Lewis to come up with Narnia.

One of the several trails in the area, the circular Rostrevor Cycle Route is a 27-kilometre (17-mile) hilly trail – complete with fantastic views of the surrounding landscape – that finishes up on the banks of Carlingford Lough.

Alternatively, fans of mountain biking can avail of the Rostrevor Mountain Bike Trails, consisting of a 27-kilometre (17-mile) red trail and 19-kilometre (12-mile) black trail – the black trail is only suitable for highly experienced mountain bikers – plus purpose-built downhill trails that are sure to get your adrenaline pumping. Trail cards are available from MountainBikeNI.

Home of the Giant’s Causeway landform and UNESCO World Heritage Site, the Antrim Coast is another of the country’s most visited and most scenic areas. If they wish, cyclists can begin following the popular driving route north along the coast from the town of Larne to Ballycastle, passing through lovely villages such as Cushendun.

From Ballycastle, CycleNI recommends a 56-kilometre (35-mile) circular route that continues along the Causeway Coast past the 16th-century Kinbane Castle and the island of Carrick-a-Rede – joined to the mainland by a vertigo-inducing rope bridge – and on to the Giant’s Causeway.

The return journey to Ballycastle takes you to the town of Bushmills, the location of the Old Bushmills Distillery. Die-hard Game of Thrones fans have the option to add in a roughly 14-kilometre (nine-mile) detour to The Dark Hedges in nearby Ballymoney – an avenue of intertwined beech trees used as the location for ‘the Kingsroad’ in the HBO series. 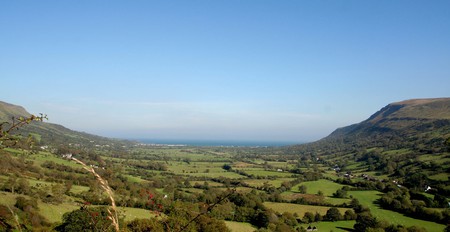