Five Irish Whiskeys You Should Be Drinking 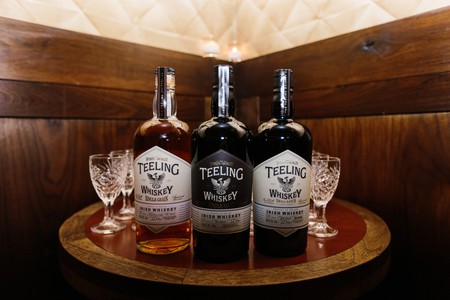 Irish whiskey is great for year-round sipping, not just on St. Patrick’s Day. But we’re always happy to have an excuse to buy a new bottle, and the green-hued holiday is as good as any.

Jameson might be the brand that most quickly springs to mind when you think of spirits from the Emerald Isle, but there are many more that are deserving of your acquaintance. Here are a few of our favorites.

Triple-distilled and charcoal-filtered, this blended whiskey is an easy-drinker—smooth and mildly sweet, yet flavorful, with slight oaky notes from the bourbon barrels in which it’s aged. As a bonus, it’s pretty easy on your wallet, too; you should be able to find it for around $20 a bottle in most areas.

The strong move: Clontarf also produces a single malt that, while not available in America, has received a gold medal in the San Francisco World Spirits Competition. Ask nicely and someone might bring you back a delicious souvenir from a jaunt to greener shores.

Knappogue Castle’s entry-level bottle is its 12-year-old single malt, made exclusively from malted barley and triple-distilled in a traditional copper pot still, and aged in bourbon casks. Its flavor leans toward the bright, fresh, and fruity.

The strong move: A bottle of the 1951, one of the rarest whiskeys in existence, and considered by many to be one of the finest as well. You can try a sip at Pouring Ribbons in NYC, one of the few bars in the world to carry it.

A post shared by Knappogue Castle Irish Whiskey (@knappoguewhiskey) on Jan 13, 2017 at 8:33am PST

Dating back to 1887 but only recently available in the U.S., this delicious single pot still whiskey produced by the Midleton distillery (see below) is aged seven to nine years in both sherry and bourbon casks, with flavors that include apple, honey, and nuts.

The strong move: Get a bottle of Green Spot’s sister spirit, the 12-year-old Yellow Spot, as well and compare the difference in flavors.

Midleton, a distillery founded nearly 200 years ago, makes some of the Emerald Isle’s most famous whiskeys, Jameson among them. To create the extremely high-end Dair Ghaelach, Midleton used some of its finest liquid, aged 15 to 22 years in bourbon barrels, then finished it for 10 months in barrels of new Irish oak made from 130-year-old trees; it’s the only Irish whiskey to use the wood. Irish oak imparts more of a vanilla flavor into whiskey than American does, resulting in a spicy, creamy, dessert-like whiskey. The label of each bottle is marked with the number of the tree from which the barrel was made; 10 trees in total were used.

The strong move: Believe me, if you’ve managed to get your hands on a bottle of this whiskey (which are rare and will also run you $250 or so), you’ve already made the strong move.

The Teeling brand stretches all the way back to 1782, and was recently resurrected by descendants of the original Mr. Teeling. The main range comprises of a trio of whiskeys: a small-batch blended whiskey, finished in rum barrels; a single grain whiskey, fully matured in California wine barrels and intensely fruity; and a single malt, of 100 percent malted barley, finished in five different wine barrels: sherry, port, madeira, white Burgundy, and Cabernet Sauvignon.