The 10 Most Beautiful Places in Iceland 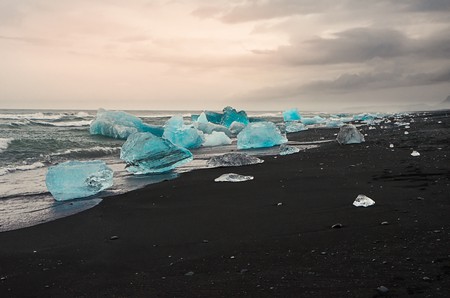 While beauty is subjective, there is an element of agreement in that scenes from nature seem to touch us all. Sometimes Iceland can be a bit intense visually, with sunsets like Surreal French-Impressionist mashups and with canyons and waterfalls fit for playing the science fiction landscapes of our Hollywood fantasy worlds.

Between the picturesque and the sublime, aesthetic beauty can even be transcendent; it is up to the viewer. Perhaps it is something only poetry or other artistic notions can describe in detail as here they are being given a place to which they test themselves in the immensity of shapes, forms and colors in the landscape. Out of so many places to choose from, here are the ones that will stay ingrained as a beautiful place for humans to experience.

Svínafellsjökull is an outlet glacier from the enormous Vatnajökull glacier and can be reached from the ring road in South Iceland. It was used as a film location in the 2004 Christopher Nolan film, Interstellar. As a stand-in for an alien planet, the scouting crews succeeded in finding a landscape of bewildering beauty, stark otherness, and fragility. The blue crevasses of the massive expanse will stretch your imagination and topple your sense of what a landscape is capable of galvanizing in the aesthetic sensations of the human gaze. 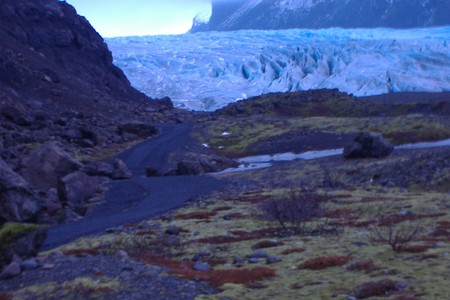 Courtesy of the author

Grótta is an island bird sanctuary with a lighthouse at the tip of Seltjarnarnes peninsula west of Reykjavik. With close proximity to the city, it is easily accessible and perfect for a quick breath of natural surrounding and birdsong. When the path is low you can walk out onto the island itself, but beware getting stuck. The sunsets here are well known for their drawn out display of fluorescent colors, the sun positively bleeding into the horizon. Enjoy dipping your feet in the heated footbath close by while you bask. 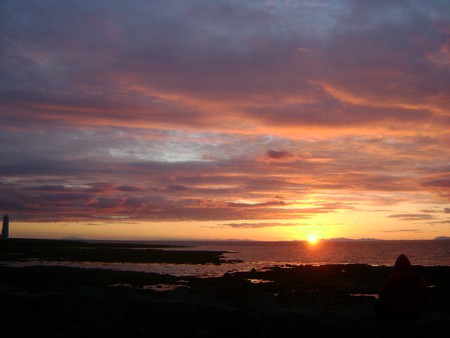 Courtesy of the author

Snæfellsjökull Glacier sits at the tip of Snæfellsness Peninsula. This 700,000-year-old stratovolcano with a glacial summit is well known for being the entrance to a passage leading to the center of the earth in Jules Verne´s 1864 Science-Fiction novel, Journey to the Center of the Earth. It is also featured in the 1968 novel Under the Glacier by Icelandic Nobel laureate, Halldór Laxness. There is an added dimension to the aesthetic beauty of a scene with knowledge of the ways it was used to inspire works of art. 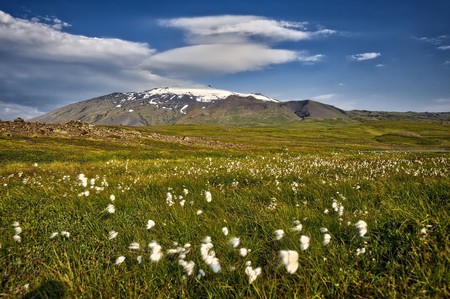 Þórsmörk valley is a nature reserve and popular hiking route in the southern part of the Highlands. The valley is surrounded by three glaciers: Eyjafjallajökull, Mýrdalsjökull and Tindfjallajökull. The variety of landscapes existing in the same valley, and the mist that occasionally cloaks the whole area, gives you the impression that you are hiking in a world in itself – an extremely concentrated version of planet earth. You can see glacial rivers cutting through the expanse of black sand desert, as well as rich flora and fauna, with towering mountain ridges encircling above. Multiple hiking trails will take you crisscrossing through this astonishing landscape. 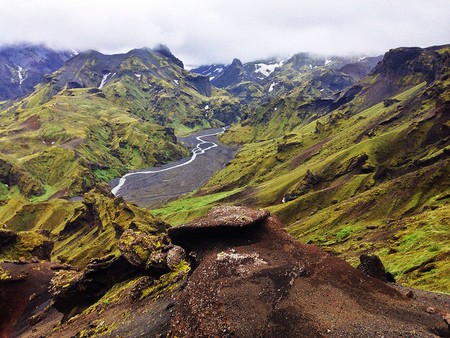 Rauðasandur is a beach in the Westfjörds of Iceland on Breiðafjörður bay. The red-colored sand is a bit surreal in its lucidity, especially in the way it contrasts with the black cliffs and blue ocean. The waves here are rolling in from shallow water gently, everything flat and vast, and very mirage-inducing. The red sand takes its color from pulverized scallop shells accumulated over centuries. On a clear day, you can see Snæfellsjökull glacier across the bay. 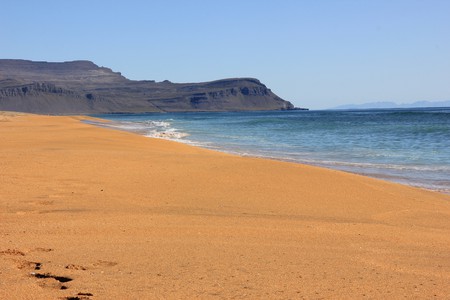 Jökulsárlón beach sometimes referred to as ‘diamond beach,’ is named after the plethora of uniquely shaped ice chunks that have traveled from the glacial lagoon just across the main road. The huge ice chunks scattered along the black sand in varying states of melting, each with such character, make it hardly imaginable that it was all created and placed there by its own design. Each visit will bring you a different scene as the lagoon is constantly depositing a changing role of ice sculptures.

Reynisfjara Beach is a poignant setting for some dramatic and unforgettable beauty to be experienced. From the black sand beach, which is more like the darkest ash-grey you can imagine before morphing into black, are soaring, jagged basalt sea stacks reaching 66 meters straight from the ocean. It is located just off the main road on the South coast of Iceland close to the village of Vík. The waves’ immense thundering against the shore combined with the visual of their crashing into the sea stacks in the distance interrupts your sense of depth and can bring a synaesthetic moment of spine-tingling intimacy with the beach. Also notice the basalt columns facing the shore, adding another dimension of awe. 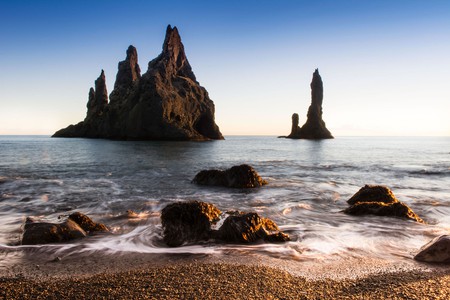 Hraunfossar are waterfalls representing the unusual natural phenomena of cold, subterranean spring water seeping through a lava field and becoming river rapids. Protected since 1987, these falls are located in West Iceland off road 518 – close to the village of Reykholt, inland from Borgarnes. These meandering, countless streams of water of varying sizes and intensities have been traveling through the lava field for over 900 meters. When they finally reach the river Hvítá, the water color ranges from robin’s egg blue to a stunning turquoise, while the river can vary from stark white to a sapphire hue. 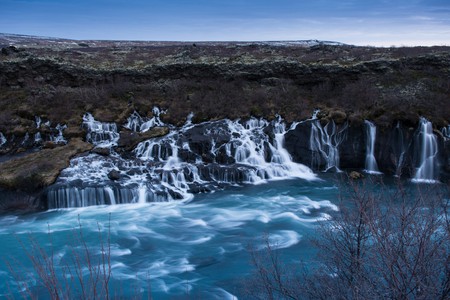 Víti Lake is inside a crater around 150 meters in diameter on the Northeast shore of Lake Öskuvatn in the Central Highlands. The opaque blue water of this geothermal lake, rich in sulfur and minerals, is what is so beautiful about this place. Although there are other places to experience this opaque blue color, Víti requires a steep descent down the crater’s sides to reach, and while you can swim in it, there are no tourist infrastructures to assist you. The view from both the lakeshore and from the crater’s rim is a significant experience in aesthetic appreciation of color. The rich earthy hues of the layers of mud and rock above the undulating blue of the water gives you the impression that you are peering into a prehistoric eye from which all shades of blue emerged. 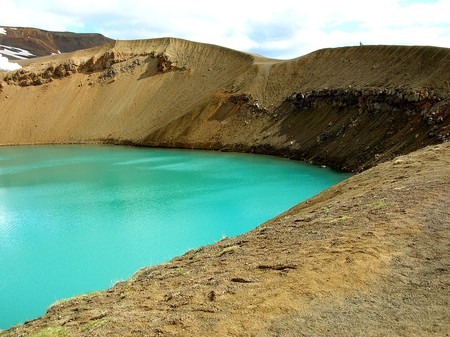 Stakkholtsgjá Canyon, 100 meters deep and 2km long, is located near the entrance to Þórsmörk valley. This narrow riverbed, with sleek, moss-covered rocks pressing on either side, ends in a subtle, elegant waterfall. With hues of almost neon green to ash-yellow moss decorating the natural rock formations that jut and curve, you will find yourself feeling overwhelmed by such intense and raw colors. 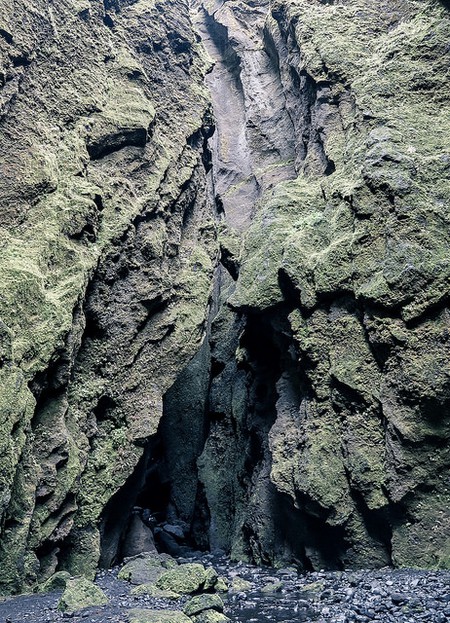