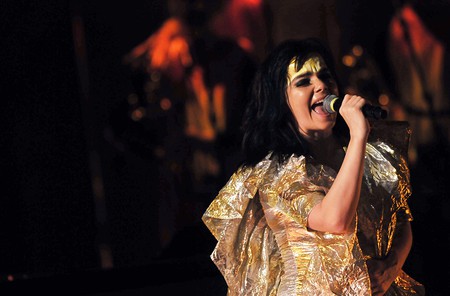 Björk has announced that she has a new album ‘coming out very soon’.

The upcoming LP, which doesn’t have a name yet, is currently available to pre-order on the Icelandic singer’s website.

The description promises ‘details to be announced soon’, with mock-ups of the vinyl and CD showing a blank white cover.

‘I am excited to share with you that my new album is coming out very soon,’ she wrote on Twitter.

It will be Björk’s ninth studio album – her first since Vulnicura in 2015, which dealt with her break-up from the artist Matthew Barney.

Talking to Dazed, she explained that the new one would be very different.

She said: ‘This is like my Tinder album. It’s about that search (for utopia) – and about being in love. Spending time with a person you enjoy is when the dream becomes real.’

The singer also recently revealed to Pitchfork how important it was for her to connect with nature in order to be creative.

She said: ‘You can be on Facebook for a long time, and then you get a feeling in your body like you’ve had three hamburgers. You know it’s trash.

‘I always advise my friends: just go for a walk for an hour and come back and see how you feel then.

‘I think we’re meant to be outdoors. I was brought up in Iceland, and even if it was snowing or raining, I would be outdoors all day. Entertain yourself. Do shit. I think we need to put humanity into technology – the soul. It’s about using technology to get closer to people, to be more creative.’