5 Best Murals in Reykjavik That You Should Visit 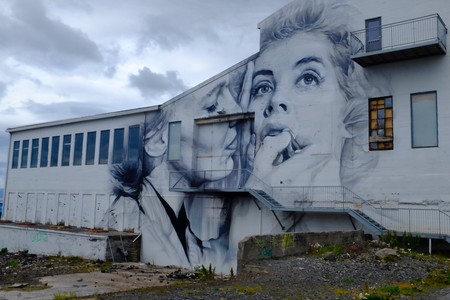 From the 1961 play, ‘No Exit’ by Guido van Helten | Courtesy of the author

The colorful North Atlantic capital of Reykjavik, Iceland has a lot to take in when it comes to street art in the form of murals. While some projects are commissioned by the city for specific artists, others come from anonymous contributors.

Cultivate Your Own Garden, 2012, by Sara Riel and Davið Örn Halldórsson 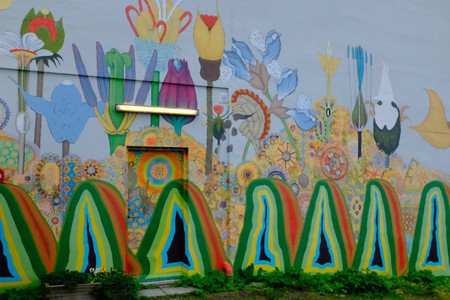 Located just one block from the ocean next to a kindergarten is the Seljavegurthis wall mural. This art installation is part of the natural kingdom theme titled ‘Here: Kingdom of Plants’. It was created by Icelandic artist Sara Riel and is part of a series of murals completed in 2012. This one in particular, ‘Cultivate Your Own Garden’, was done in collaboration with the Icelandic artist Davið Örn Halldórsson.

Scenes from the 1961 production of ‘No Exit’ at the National Theater of Iceland, 2014, by Guido van Helten

From the 1961 play, ‘No Exit’ by Guido van Helten | Courtesy of the author

Australian artist Guido van Helten painted these scenes from the 1961 production of ‘No Exit’ at the National Theater of Iceland. The paintings are from photographs taken by Andres Kolbeinsson and were selected from the Reykjavik Museum of Photography Archive. The play was originally written by Jean Paul Sartre and the scenes represent the three characters – Estelle, Garcin and Inez – locked in a room together for eternity. They can be spotted along the buildings on the far west of the Vesturbær neighborhood. 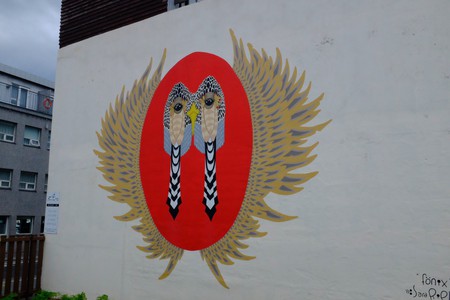 Fönix by Sara Riel | Courtesy of the author

This piece called Fönix can be found at Nýlendugata close to the harbor area of Reykjavik. Fönix was presented in context with Endemi Magazine, with an exhibition and publication in Endemi’s third issue, held at The Sculptural Association in collaboration with the Reykjavik Art Festival.

The project Wall Poetry is a collaboration between Iceland Airwaves, the yearly music festival that takes place in Reykjavík each autumn, and Berlin’s Urban Nation. The aim of this project, which started in 2015, was to get musicians and street artists to collaborate beyond the recording studio or the gallery space. 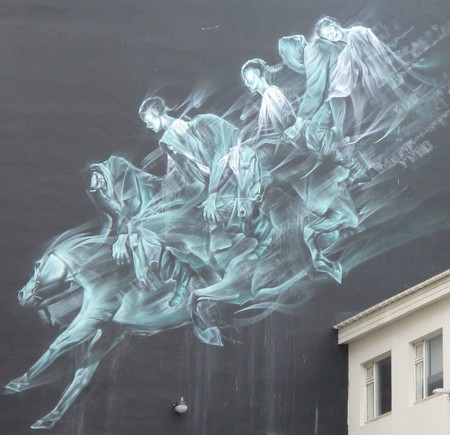 This piece can be found behind the art gallery, Hverisgalleri, located at Hverfisgata 4 in downtown Reykjavik. Li-Hill is a Canadian visual artist based in Brooklyn, New York while John Grant is an American singer-songwriter based in Iceland. His second studio album called ‘Pale Green Ghosts’ was released in 2013 upon Grant’s move to Iceland.

Tankpetrol with Gus Gus, inspired by the song ‘Over’ by Gus Gus 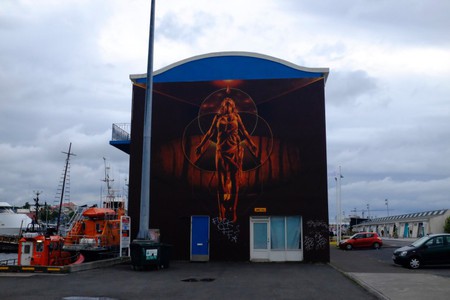 Tankpetrol with Gus Gus, inspired by the song “Over” by Gus Gus | Courtesy of the author

This piece can be found in the Grandi neighborhood of Reykjavik at Grandagarður 14. Gus Gus is an electronic band formed in Reykjavik in 1995 with a varied lineup of members including, at times, Emiliana Torrini. The band’s sound encompasses house music, techno and trip hop. Tankpetrol is a Polish street artist based in Manchester, UK.