12 Icelandic Hip-Hop Artists You Should Know 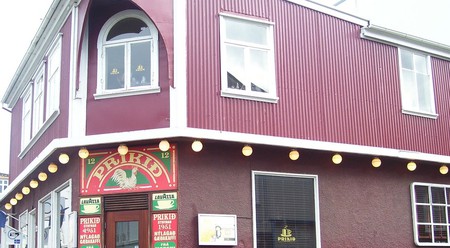 While this tiny island in the North Atlantic has become well known for its soft, soothing tones from the likes of Sigur Rós and Björk, there is another side to the Icelandic music scene that is slowly gaining recognition. When it comes to hip-hop, there is nothing more unique than having the language be in basically Old Norse. Here are 12 hip-hop acts from Iceland that are worth a listen, all comprising of a variety of genres within hip-hop. Head to Prikið in Reykjavik for cozy live acts.

This notorious cat lover is often posting cat videos on his social media – fitting for his stage name which translates to grey cat. The rapper uses poetic lyrics that combine personal elements with historical references. He is often collaborating with other artists in Iceland. As of summer 2017, Kött Grá Pje is no longer working under this name.

This Icelandic so-called trap-pop collective is made up of the three young artists; Bleache, Prince Fendi and Plastic Boy. While busy making music for at least the past five years, they have only now come out as the Geisha Cartel. With a blend of punk-rock energy, catchy melodies and infectious beats, this Icelandic group is creating their own style of hip-hop.

This one-man show only began in 2016. With a focus on sincerity that people can connect to, his personal and emotional lyrics and style are already making quite an impression. Dadykewl is also determined to keep his style of hip-hop positive, even expressing interest in positivity rap battles where compliments and affirmations are thrown.

Born in 1994, GKR is devoted to reaching other countries with Icelandic rap – even while the language is still in Icelandic. His carefully edited videos are on point and his style is relatable. Often compared to the likes of Yung Lean, this young Icelandic artist is worth a listen.

Lord Pusswhip, named after a friend who haphazardly called him that and it stuck, is a hip-hop producer and rapper who has been on the scene for the past few years. With his psychedelic beats and confrontational lyrics, his videos and live sets combine elements of punk rock, horror, and 90’s culture.

Translating to wolf wolf, this Icelandic rap duo has been making music for the past few years and have made quite a name for themselves. Their 2011 debut album was ‘Föstudagurinn Langi’ or Long Friday. In 2015, they released the album ‘Tvær plánetur’, which featured their hit single ‘Brennum allt’, or Burn it all.

Gísli Pálmi Sigurðsson, born in 1991, raps in Icelandic mostly about his controversial lifestyle along the usual theme of rap lyrics. However, his precedence in Iceland is great as many see him as leading Iceland from its 90’s based hip-hop scene into a uniquely Icelandic scene of heavy bass and catchy synths.

This musician has become a household name in Icelandic hip-hop since his first release in 2013. With his use of catchy hooks and even more catchy lyrics, he has established himself as a promising figure in the scene. His moniker translates to Mister Peanut Butter, and his music is likewise unapologetic and friendly.

This Icelandic rapper and hip-hop artist has R&B and pop influences and has been active on the scene for more than a decade. He was a member of the Icelandic rap groups 32c and Skábræður, before going solo in 2010 with the release of ‘Bara ég’ in 2011.

Reykjavíkurdætur are Iceland’s first all-girl hip-hop band comprising of, at differing times, between 19 and 17 members. The name means ‘Daughters of Reykjavik’. Beginning in 2013, the group launched a campaign that year for their first album. They rap almost exclusively in Icelandic and the lyrics revolve mostly around the experience of being a woman in Iceland, speaking out on such topics as sexuality, body shaming, rape culture, sodomy, corrupt politicians, and maternity. They have gained quite a following in Iceland and abroad.

This fresh new face on the Icelandic hip-hop scene is making a huge name for himself at the tender age of 17. Some of his songs already have over 38,000 plays on Spotify. With tender micro beats, Aron Can has a voice that lights up his tracks in a smooth play of the freshest hip-hop.

Sigmundur Páll Freysteinsson, also known as $igmund, is a fresh face on the Icelandic music scene. The artist and his team of producers recently released their first album ‘Glópagull’; which reflects both the lighter and heavier aspects of life, both the enjoyment of everyday life and the weight of personal relationships.