Where to Stay in Athens: Rapper Mi55t’s Neighbourhood Guide to the Greek Capital 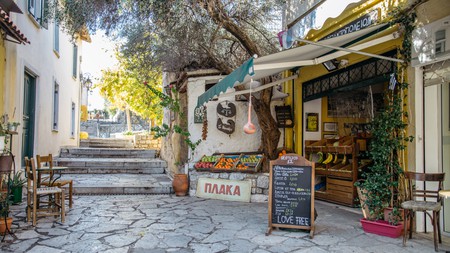 From the village atmosphere of Plaka to up-and-coming Kypseli, each of Athens’s districts offers something different to the curious urban explorer. Theoni Antoniou, better known as rapper Mi55t, gives Culture Trip the inside track on the diverse neighbourhoods of the Greek capital.

Since her first release Iremi Dinami (Quiet Force) in 2015 Athens-born Mi55t has been a key player on the Greek rap scene. She’s now a regular at Athens’s best-loved underground music venues, including the iconic stages of Bios and Gagarin. She shares her recommendations for discovering the eclectic neighbourhoods that make up the Greek capital: where to go for a late night souvlaki, where to see hip-hop and where to get away from it all. 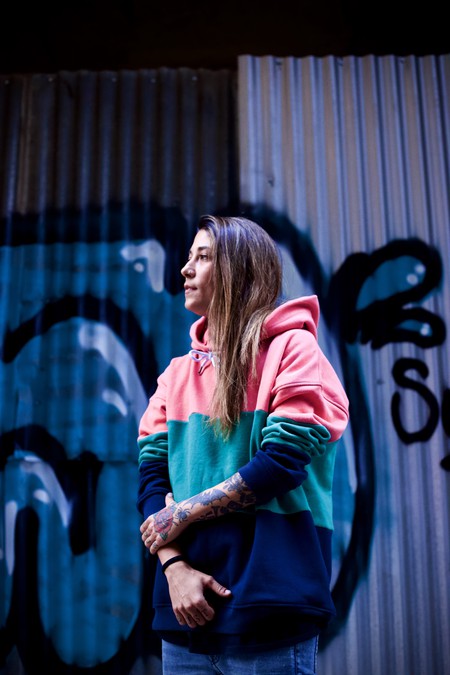 Right under the Acropolis lies Plaka, the oldest district in Athens. Its narrow streets and neoclassical buildings are the quintessential image that springs to mind for visitors thinking of visiting the city. Touristy though it may be, Mi55t is adamant that the neighbourhood should be on every visitor’s list: “Every time I travel abroad, I want to see the ‘real’ dimension of a city… it is best to experience the real Athens through its people, not places. However, a visit to Plaka is obligatory”. Here Mi55t recommends a walk through the ruins of the Roman Agora, where you can admire the Tower of Winds (an octagonal Pentelic marble clocktower) and heading towards Anafiotika for an unforgettable stroll in a village-like neighbourhood modeled on the Cycladic island of Anafi. 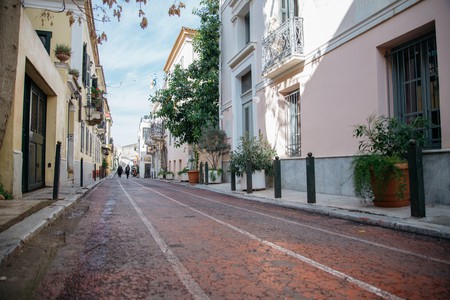 Spreading from the southeastern slope of Filopappou Hill all the way to Faliro Bay, Kallithea’s location puts both the historic centre of Athens and the sea at your feet. That is where Mi55t grew up; she describes this densely populated area as bursting with life and “authentic through and through”. Kallithea draws a young crowd, thanks to its two universities, and has recently been revitalized with the opening of Stavros Niarchos Foundation Cultural Center (SNFCC) – a public hub for cultural activities surrounded by a landscaped park and botanical gardens. Mi55t recommends grabbing brunch in the garden at Momo on Plateia Kyprou, before strolling alongside the urban gorge that used to be the Ilissos River towards SNFCC.

Beneath Lycabettus Hill, in the area of Ampelokipoi, lies Mavili Square – an area Mi55t says is notable “particularly for the nightlife”. Indeed, almost every Athenian – young and old – inevitably has hazy memories of late night adventures on this square. Named after the poet Lorentzos Mavili, the square is known for its unpretentious ambience, artistic crowd and legendary hangout spots. Among the most iconic of these is coffee and cocktail spot Lōras, which has been going strong since 1967, and after-hours bar MG, famed for its rock and indie soundtrack. Don’t forget to stop by the Mavili kantina (food truck) for a midnight souvlaki.

Psyrri is another nightlife hotspot, according to Mi55t. This gentrified neighbourhood in the shadow of the Acropolis has been a popular spot for decades, but never seems to lose its hip, bohemian appeal. By day Psyrri is a progressive, street-art adorned neighbourhood packed with arts and crafts studios, and dance, drama and yoga schools. It truly comes alive when the sun goes down. Head here in the evening to explore the plethora of bars on offer: from classics like Psyrra (a prime spot for a rakomelo) and trendy yet mellow bar Tranzistor, to the newer and bike-friendly The Handlebar café and bar. 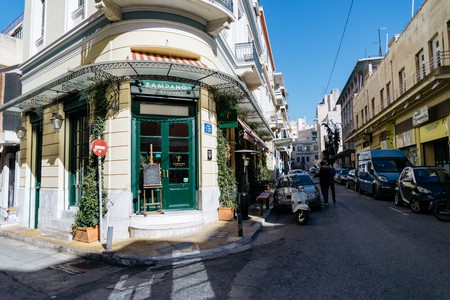 “Great talents have come from Vyronas” said Mi55t, explaining that this southeastern neighbourhood deserves a star mention in any Athens guide for its role on the Greek hip-hop scene. Indeed, the country’s first hip-hop band, FF.C, was formed there in 1987, and popular artists like Razastarr and Eversor also originate from the neighbourhood. “Vyronas has the best badasses in the city and a very dynamic cultural scene”, Mi55t continued. While not many tourists venture out to Vyronas, it is undoubtedly a place to watch when it comes to cultural events. Check out a gig at the magnificent Vrachon Theatre, for example – and its Ymittos mountain offers unparalleled panoramic views.

The locals’ inside joke is that this area is like “no man’s land”. It is officially in Ilisia, but bordered very closely by Pagrati and Ampelokipoi. It takes its name from the Hilton hotel which opened in the 1960s, instantly adding a sense of glamour and prestige to this Athenian neighbourhood with its impressive glass facade. This is Mi55t’s neighbourhood (“Represent!,” she exclaimed enthusiastically) and she can confirm it maintains a close-knit vibe – the residents favour local shops over chains and everyone seems to know each other by name. Mi55t spends most of her time in the area chilling with friends and playing basketball, which can be enjoyed at Goudi Park, a green oasis at the end of Papadiamantopoulou Street, with running paths, basketball courts and soccer fields.

To escape the hustle and bustle of the city centre, Mi55t heads south “anywhere from Voula all the way to Sounio, for bike rides which combine spectacular mountain and sea views”. Voula is part of the “three Vs municipality” of the Athens Riviera (Vari-Voula-Vouliagmeni), which are some of Athens’s most beautiful and affluent neighbourhoods. At the southwest foot of Mount Ymittos, Voula is a seaside suburb with a decidedly cosmopolitan atmosphere. Cosier than neighbouring Glyfada but just as chic, go there to breathe in the fresh sea breeze and enjoy the sunset from Faidon’s, a charming wine bar across from the picturesque Agios Ioannis church. 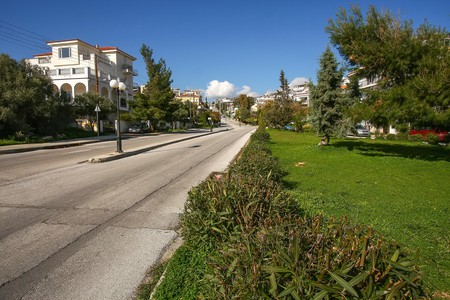 Peristeri, in the northwestern part of Athens, is a traditionally working class area that is making waves. “Along with Aigaleo, Peristeri has been shaking the sociopolitical climate of our country with its fierce spirit in recent years,” Mi55t said. Walking the streets of Peristeri, there is plenty of evidence of that: colourful graffiti signed by Fentagin, the supporters of local team Atromitos FC known for their antifascist politics, can be seen on almost every street. Peristeri’s nightlife is equally colourful, and is best known for its legendary, albeit kitschy, after-hours clubs, such as Anaktoro. The millennial crowd these days favours the local bar-restaurant Agrotikon, which combines modern elements with a traditional atmosphere and offers great live Greek music and eclectic mezedes. Try to catch one of its “Ikariotikos” dance celebrations, where hundreds of people dance on the street until sunrise.

Kypseli may at first seem like a concrete jungle, but look closer and you will understand why Mi55t calls it a “multicultural salad that is full of groove”. The neighbourhood saw a revival with the arrival of immigrants from the Balkans, Africa and Asia, along with a large number of artists, in part due to its low rents. As a result, Kypseli is now one of the city’s most vibrant neighbourhoods. Take in the eclecticism of the area by strolling along its streets, with buildings characterised by an architectural mix of neoclassicism and Bauhaus. Stop at the leafy boulevard Fokionos Negri for some coffee and people watching or head over to Agios Georgios Square for a beer and souvlaki at Dionysos. The Kypseli Municipal Market, a revitalised 1930s marketplace, is home to socially conscious businesses and hosts a range of cultural events and pop-ups. For example, check out Flower Power – a “social florist” that employs local people living with disabilities,

Mostly overlooked by tourists beyond a tour of the Panathenaic Stadium, Pagrati is another central neighbourhood that Mi55t often visits for a relaxed coffee or beer with friends after work. When it comes to quirky cafés, bars and culinary delights, Pagrati certainly delivers. Have a coffee at Aerostato on Proskopon Square and head to talk-of-the-town Hotel Chelsea for a drink. Your options for gastronomy range from souvlaki at local hotspot Elvis to innovative Mediterranean fusion dishes at Mystic and Greek cuisine at Magemenos Avlos. 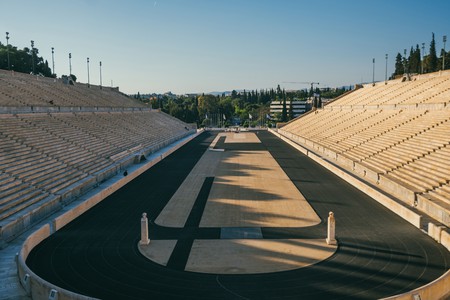