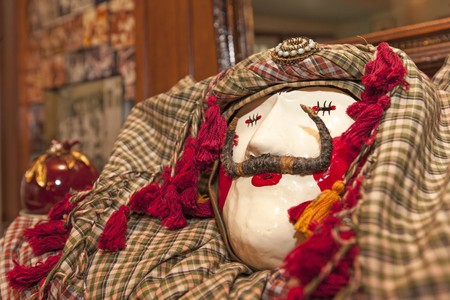 Mask of the custom of Genitsari and Boules. A dance event taking place every year at the town of Naoussa, in northern Greece, during the carnival period | © Yiorgos GR/Shutterstock

Greece’s carnival game is strong. Thanks to the diverse history of each of its regions, you will quickly understand that Greece has a variety of carnival traditions, ranging from Venetian-style celebrations to authentic homages to the ancient Greek gods. And because the Orthodox calendar is different from the Roman Catholic one, you may be lucky enough to celebrate this festive season twice. Here are some of the most unique and interesting carnival celebrations you can enjoy in Greece.

Undeniably the most iconic carnival in Greece, the Patras Carnival is one of the biggest carnival feasts in Europe. Think giant decorated floats and colourful papier-mâché figures pouring into the city streets for an entire weekend of parades and parties, though the whole week is filled with activities and happenings. One of the key elements is the Carnival King and Queen, parading in lavishly decorated floats. The festivities include games, parties, children’s workshops as well as a parade on Saturday night, right before the extravagant Sunday parade. Every year, thousands of participants get together and form groups to dance in the dimly lit streets of the city. 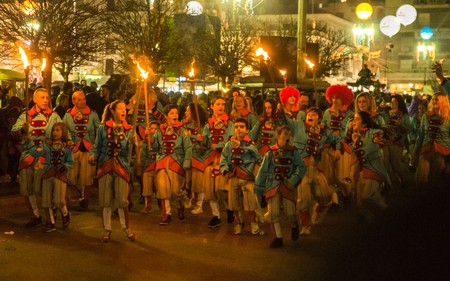 The little coastal town of Galaxidi may be totally unknown to many foreigners, but in Greece, its carnival tradition, or at least Clean Monday, is nothing new. To mark the end of carnival season and the beginning of Lent, locals in Galaxidi have a special tradition that attracts many visitors. On Clean Monday, locals get together for the alevromoutzouromata, where they throw dyed flour at each other. This unique tradition dates back to the 19th century when the country was under Turkish occupation and residents of Galaxidi decided to celebrate carnival as an act of defiance. The ‘war’ lasts all day and ends with everyone piling into nearby tavernas to celebrate the start of the fasting season. Should you think about joining the fun, make sure to grab old clothes and goggles.

Amphitheatrically built on the foot of the Rhodope mountains, Xanthi, in northeastern Greece, is home to a spectacular carnival organized with over 40 cultural groups and associations from the region. Focusing on depicting the history and culture of the region, the event lasts over a week and involves many activities and events, including tasting local delicacies, parties and activities for children. The celebration peaks during the big parade, which happens on the last Sunday of the carnival. After the parade, the tradition implies the Burning of the Tzar, the equivalent of the Carnival King, which is burnt at the entrance of the old town. Usually, fireworks and more parties follow this custom to mark the end of the celebrations. 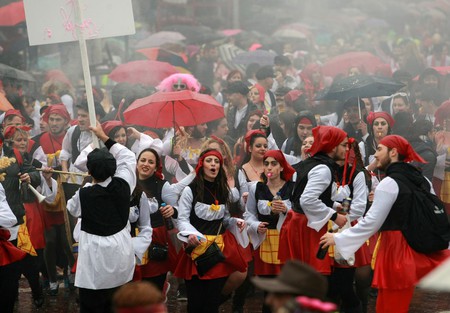 Skyros, a stunning island in the Sporades, is home to a peculiar and wild carnival. The pre-Lenten celebrations revolve around the goat dance, which happens every weekend leading up to Lent and is centred around iconic characters. Men dress as yeros, usually in black, with bells and goatskins on their waists, while women dress as korelas, wearing white garments and occasionally as frangos, wearing a traditional costume. They parade around the town’s streets, making noise along the way to ring the bells in the Monastery of Agios Georgios. After the parade, the party continues in tavernas, where people feast until the morning.

During the carnival season, Rethymno, in Crete, is filled with colours and evokes a festive mood complete with month-long celebrations. The occasion brings together locals and visitors, young and old for parties, treasure hunts, dances and parades. People wear costumes and the parade, with its strong Venetian influence, is the highlight of the celebrations, where the King of Carnival graces participants with his presence. It’s a fun moment to share the next time you visit Crete. 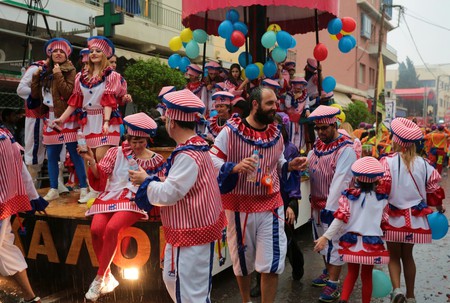 Torrential rain puts a damper on the final half-hour of the Carnival Parade in Rethymnon, Crete, one of the largest celebrations of its type in Greece | © Paul Cowan/Shutterstock

The carnival season in Naoussa, located in central Macedonia, in northern Greece, is a fun celebration which centres on the ‘Genitsaroi and Boules‘, one of the oldest and most popular customs in Greece. In this custom, unmarried men dress up as Genitsaroi (Janissaries) while the bride, also played by a man, parades around the town, wearing a specific mass. Accompanied by music and dances, the parade is quite organized and follows the same itinerary and traditional songs. A carnival parade also takes place with dances and theatrical performances, while on the last Sunday, a big celebration is held in the main square. 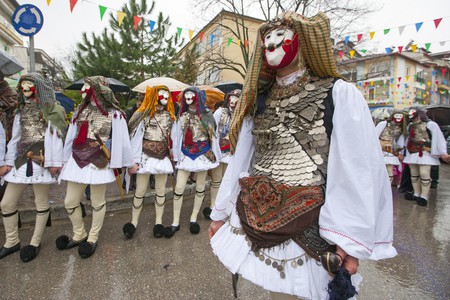 The ancient custom of Genitsaroi and Boules. A dance event taking place every year at the town of Naoussa, in Northern Greece, during the period of the carnival | © Yiorgos GR/Shutterstock

Since the Venetians occupied the island for a while, Corfu is one of the few places that mixes ancient Pagan celebrations with Venetian carnival. As such, the Carnival of Corfu is one of the most impressive in the country. From its costumes to its floats, the carnival’s parade is simply spectacular and full of music and laughter. Another main element is the petegoletsia, which means gossip in Corfiot dialect, a traditional street theatre performance where actors sit on the balconies of houses in the old town and share gossip in the local dialect, which usually focuses on the island’s political and social life. 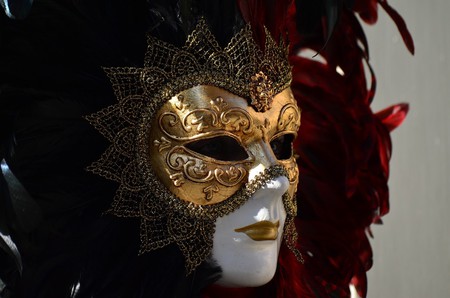