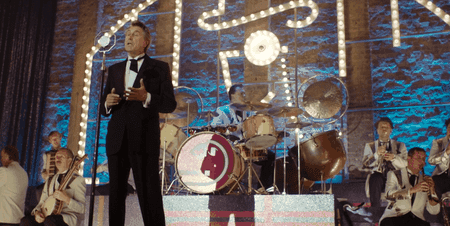 The makers of Babylon Berlin threw two stunning musical curveballs in Episode 10—an homage to Dennis Potter and a cabaret performance by Bryan Ferry.

Something weird and wonderful happens at the start of Episode 10 of Babylon Berlin. Helga Rath (Hannah Herzsprung) and Gereon Rath (Volker Bruch), their rooms flooded with morning sunlight, do an impromptu goofy dance to “Mir ist so nach dir” (translated in the subtitles as “I’m in the mood for you.”)

The song is not on the radio or on the gramophone but in Helga’s head and on the soundtrack—in fact, she dreams the whole routine, having woken in an ecstatic mood. 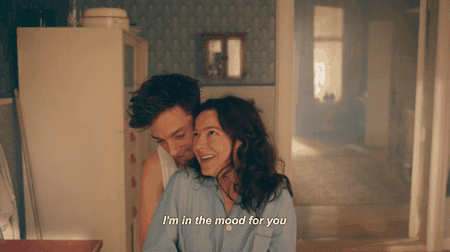 Helga is not Gereon’s wife but his sister-in-law. They have been secret lovers for 10 years—her husband Anno having never returned from World War I. With Anno officially proclaimed dead, Helga has moved from Cologne to Berlin (her adolescent son in tow) to live openly with Gereon.

Any time will do

It’s Helga who gets things rolling. She wakes in bed, flings back the covers, and shimmies into the kitchen. She sets a frying pan alight and flings it into the sink, whereupon Gereon, half asleep and head bowed, appears in the doorway.

They do a bit of peekaboo, then flit around the kitchen table before waltzing into the living room, their enthusiasm making up for their lack of finesse. What the heck? The days of the Weimar Republic are numbered and everyone is letting their hair down.

Transparently, the use of “Mir ist so nach dir” echoes the British TV dramatist Dennis Potter’s deploying of “cheap songs” as a kind of 1930s equivalent of psalmistry in his groundbreaking 1978 miniseries Pennies From Heaven. Unlike Pennies’ characters, Helga and Gereon don’t lip-sync to the lyrics; instead they express their emotions through their dancing.

Specifically, “Mir ist so nach” is an ironic counterpart to Potter’s use of Harry Woods and Billy Hill’s “The Clouds Will Soon Roll By,” as recorded by Ambrose and His Orchestra with vocals by Elsie Carlisle in 1932.

Whereas Helga, after a night of lovemaking, dreams of dancing with Gereon, Arthur Parker (Bob Hoskins)—Pennies’ perpetually randy sheet-music salesman–lip-syncs to “The Clouds Will Soon Roll By” after being denied early-morning sex by his prudish wife (Gemma Craven). “We’ll find a silver lining,” he mouths, hoping she’ll be in the mood next time.

Out of the blue

Babylon Berlin’s “Mir ist so nach dir” dance comes out of the blue—a refreshing romantic and comic moment in a series that primarily depicts political upheaval and murderous intrigue in the waning years of the Republic.

Weimar’s cultural flourishing—in tandem with its decadence—and mordant view of desire is epitomized in Episode 10 of by the performance of Bryan Ferry onstage at Moka Efti, the cabaret club favored by the aspiring detective Charlotte Ritter (Liv Lisa Fries)—who sometimes works as a prostitute in its basement brothel. 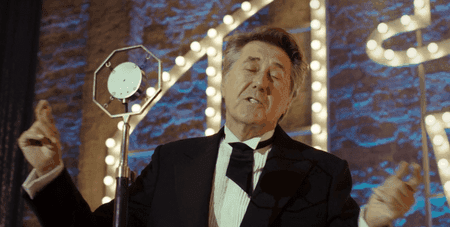 Intercut with shots of Charlotte twigging there are corrupt officials sitting upstairs in Moka Efti are shots of Ferry crooning “Bitter-Sweet.” Artfully selected for the episode, this Ferry-Andy Mackay composition from the fourth Roxy Music album Country Life (1974) is a melancholic love lament, full of Sturm und Drang, in which Ferry suddenly rasps out a sardonic German verse about love’s renewability. It’s Ferry’s Marlene Dietrich moment.

Testifying to the influence of Bertolt Brecht and Kurt Weill on Ferry’s songwriting, “Bitter-Sweet” is an homage to them as much as “Mir ist so nach dir” is an homage to Potter. A lavish theater production of Brecht and Weill’s The Threepenny Opera (1928)meanwhile plays a crucial role in Babylon Berlin‘s Episode 14, in which the most famous bar from “The Ballad of Mackie Messer” (reinterpreted as “Mack the Knife” in 1954) is on everyone’s lips.

Adding to “Bitter-Sweet”’s lore, the German words in it were translated for Ferry by Constanze Karoli and Eveline Grunwald, the German models who posed for the cover of Country Life.

Dressed in lingerie (though not much of it) and made-up as they are, the two women could have walked right into the more risqué scenes in Babylon Berlin—or, for that matter, into one of 1929 Berlin’s naughtier clubs. (Above: video of Ferry performing “Bitter-Sweet” live.)

The brilliant choices of “Mir ist so nach” and “Bitter-Sweet” add a playful post-modern element to Babylon Berlin, allowing it to become a receptacle of ideas and allusions without interrupting its flow.

Few TV series now dare to experiment with the non-naturalistic drama that was Dennis Potter’s legacy, while the influence of Brecht and Weill on Roxy Music’s illustrious first five albums has too rarely been acknowledged. The show’s creators—Tom Tykwer, Achim von Borries, and Hendrik Handloegten—should be applauded for these gambits.