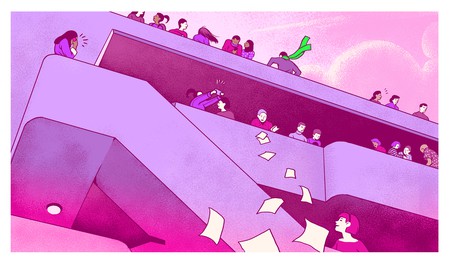 Close to the Tiergarten park in central Berlin is a neighbourhood that feels frozen in time. The result of a race to define the future of cities, Hansaviertel is a unique piece of modernist architecture with a fascinating history.

Berlin is many, many cities in one, a place where hedonistic nightlife can follow a day of hiking alongside peaceful city lakes. This diversity is also evident in its architecture, which encompasses everything from wedding cake-style Stalinist structures to Brutalist buildings and 19th-century masterpieces. It means that the German capital’s long history is visible not just in its many museums, but in the buildings and streets themselves. Every now and then, when walking through Berlin, you’ll stumble across one of these hopeful monuments to the future. 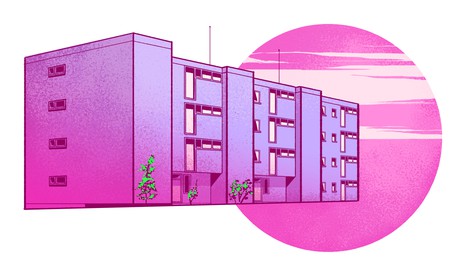 On the edge of Tiergarten, the large, leafy park in the centre of town, lies one of them. In 1953, a design competition was announced to create a new neighbourhood in Hansaviertel, in what was then West Berlin. The old Hanseatic Quarter had been nearly completely destroyed by allied phosphor bombs towards the end of World War II a decade earlier, and was to be rebuilt to alleviate the city’s housing shortage. The competition was also a response to East Berlin’s imposing new Stalinallee (now Karl-Marx-Allee), with the Hansaviertel’s “Neues Bauen” (New Buildings) conceived as a democratic, inviting neighbourhood; a very different approach to the urban planning of the monumental, Moscow-style Stalinallee. Some of the most well-known architects of modern times were invited to create designs for Hansaviertel, among them Oscar Niemeyer, Walter Gropius, Le Corbusier, Arne Jacobsen and Alvar Aalto. Together the architects – many of whom were part of the Bauhaus movement – created a beautifully varied neighbourhood that was showcased to the public in the “Interbau 1957” exhibition. Its houses epitomise the practical but generous design vision of what modern living could look like in the mid-to-late 1950s.

When the Interbau exhibition opened in July 1957, only a third of the buildings were finished, but visitors got the chance to see the brand new neighbourhood from both above and below with the help of a viewing crane, a chairlift and even an exhibition in an U-bahn tunnel – the Hansaplatz metro station that was erected at the same time as the exhibition. The show interiors of the houses were as forward-looking as the clean, geometric building designs, featuring Italian fabrics as well as Bauhaus- and Scandinavian-style furniture. But sadly, the Interbau buildings wouldn’t turn out to be the future of housing design in Berlin. Both they and their rivals, the pale behemoths on Stalinallee, would prove too expensive for mass-construction. Hansaviertel and Karl-Marx-Allee live on, though: Karl-Marx-Allee was renovated and modernised after the reunification of Berlin and its architecture has been listed since 1990, with Hansaviertel’s following in 1995.

Walking through Hansaviertel today still stirs the imagination. Even on a grey day, the buildings are inviting, although the greenery that made the neighbourhood so welcoming in the 1950s has become overgrown, in some places obscuring the structures behind it. Some can’t be missed, though, like Klaus Müller-Rehm’s and Gerhard Siegmann’s ‘Giraffe’, an all-concrete high-rise building that sticks its head out of the trees. Another fascinating building is celebrated Brazilian architect Oscar Niemeyer’s addition to the competition. On Altonaer Strasse 4-14 you’ll find his apartment house, which seems at first to be floating. The massive concrete building actually rests on stilts that give its rectangular hulk a graceful feel, and is home to 78 apartments. 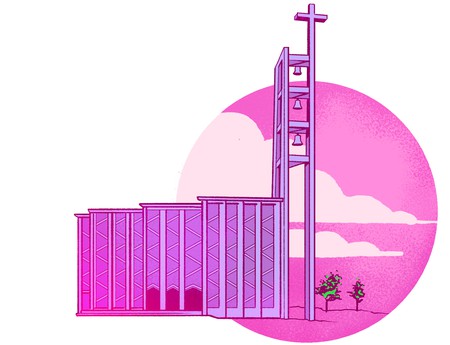