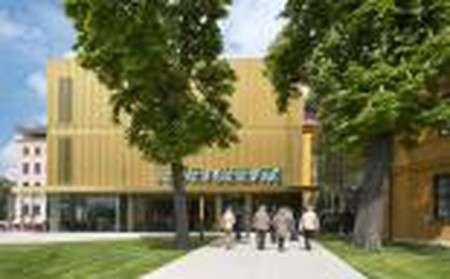 We take a look inside the transformed historic building of Lenbachhaus, a destination that should be on every architecture enthusiast’s bucket list.

Most famous for its collection of paintings by Munich-based expressionist painters Der Blaue Reiter – or the Blue Rider – the Lenbachhaus underwent extensive restoration by architectural firm Foster + Partners in 2013. The exhibition spaces of the Lenbachhaus have been augmented with a spectacular new wing that provides the ideal environment in which to view the Blue Rider collection. Along with radically improving the building’s environmental performance, the remodelling has created a new entrance and social spaces, including a restaurant, terrace, education facilities and a large atrium.

The museum is central to the Kunstareal, the art district neighbourhood of the city. Before World War I, many of the Blue Rider artists lived in this area. Figures in this important avant garde collective included Wassily Kandinsky, Marianne von Werefkin, Franz Marc, August Macke, Gabriele Münter and Paul Klee.

Built by Gabriel von Seidl for the painter Franz von Lenbach between 1887 and 1891, the Lenbachhaus was built as a Florentine-style villa and has gradually been extended over the last century. Foster + Partners removed a two-storey extension dating back to the early 1970s and replaced it with a three-storey rectangular structure, accentuating the sculptural qualities of the building. The new entrance is located between the new extension and the Lenbach studio, leading visitors into an atrium lobby in which various parts of the collection can be reached. The Blue Rider collection is housed within the newest space, and comprises a series of small galleries with more intimate rooms, intended to replicate the domestic scale of their original setting in Villa Lenbach.

At 4,000sqm, the renovation included a pioneering lighting technology in which artificial and natural light are indistinguishable. The 55-plus exhibition and gallery spaces are lit with a combination of LED lights and natural lighting coming from the atrium. This innovation in lighting used on such a large scale is a first for the Lenbachhaus and will set new standards for art museums all over the world.

The unquestionable focal point of the new building is its top-lit atrium, which houses a temporary exhibition space, as well as a specially commissioned piece of art by Olafur Eliasson entitled Wirbelwerk. The location of the atrium has shifted the orientation of Lenbachhaus towards a newly created open space with fabulous views of the Propylaea and the Königsplatz.

The Blue Rider group was formed by Wassily Kandinsky in 1911 and lasted until 1914 when Kandinsky was forced to return to Russia at the start of World War I. This group of artists did not conform to a uniform style, and they were loosely associated by their distinctive creative talents. From Wassily Kandinsky’s abstract compositions to Franz Marc’s large symbolic animal paintings, these artists were united by the shared belief of a spiritual dimension within art that accommodated diverse forms of expression. They had a strong interest in abstract forms and prismatic colours which they believed could counteract the corruption and materialistic contexts of their age. The name Blaue Reiter (Blue Rider) refers to a key motif in Kandinsky’s work: the horse and the rider, which for him was a symbol of moving beyond realistic representation. The horse was also a prominent motif in Franz Marc’s work, referencing the notion of animals as symbols of rebirth.

Over the past five decades, the Lenbachhaus has continually worked on its Blue Rider collection, presenting the pieces in major cycles of significant exhibitions and important retrospective surveys and catalogues of the individual artists. During the museum’s closure for renovation, parts of the collection went on tour until 2012 to shows in Den Haag, Baden-Baden, Moscow and Japan, and works of graphic art went on display at the Albertina in Vienna.

Other exhibited works to be enjoyed within the collection include pieces by Andy Warhol, Joseph Beuys, Ellsworth Kelly and Dan Flavin. The entire third floor of the Stadtische Gallery is dedicated to the abstract art of Wassily Kandinsky; this is mostly thanks to Gabriele Münter, Kandinsky’s former mistress, who donated her 1,000-plus collection of Kandinsky pieces to the Lenbachhaus in 1957.

The overall collection of the new and improved Lenbachhaus is not only outstanding, but rather overwhelming. The renovated spaces contain over 30,000 avant garde artefacts to navigate and explore. Experimental settings and arrangements in the new architectural design disregard traditional viewing conventions, as a blend of eras and genres are combined together. With special emphasis upon Munich artists of the 19th and 20th centuries, it is most certainly worth a visit to experience some of the most iconic works of art that have been produced within the city itself.