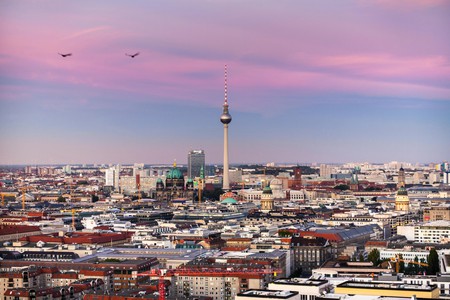 Berlin’s food scene features authentic flavors and a variety of different cuisines. Yet, for the gastro to match the vibe of the city, it must also be casual and cheap. This is probably why street food in Berlin has become such a craze, where many of the city’s hippest establishments have decided to go mobile. We’re here to help you sift through the mediocre in search of the very best. Here are the top food trucks in Berlin.

While there is practically an ice cafe on every street corner in Berlin, some types of sweet frozen treats are fewer and further between. For one, ice cream sandwiches just aren’t as common as the classic Kugel in der Waffel, so it’s easy to miss them from time to time. Luckily, Zwei Dicke Bärren, which means ‘two thick bears’ in Deutsch, has come to fill this niche. They make ice cream sandwiches, featuring wonderful combos that include the almond cookie sandwich served with Nutella ice cream in between; their lemon sugar cookies with blueberry ice cream are quite phenomenal as well. Find them at street food bonanzas like Markthalle Neun’s Street Food Thursdays. 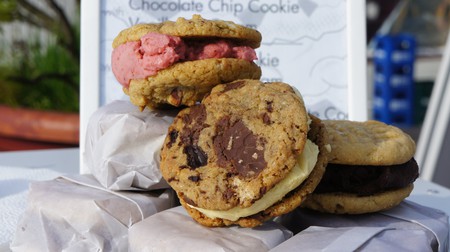 At Big Stuff Smoked BBQ, expect unbelievably tender, saucy, smoky beef brisket, veal ribs, pork belly, pulled pork sandwiches, and more. Meats are served on metal trays with simple veggie sides to balance out textures and cleanse the palette. Plus, it’s possible to get a combo of different options as well. Wash things down with an order of their homemade lemonade for the perfect meal. Find them at Markthalle Neun each Thursday. 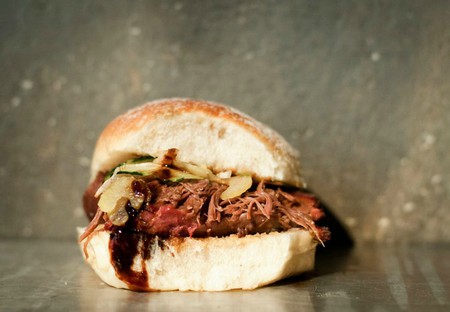 A good dose of southern comfort is equally as important as the occasional BBQ indulgence. Keep an eye out for Humble Pie‘s bright red food truck to get this regional food fix. Here, you will find a mix of southern staples like fried chicken, buttermilk biscuits, sweet tea, and naturally, a variety of delicious, gold-crusted sweet and savory pies. The pie flavors on offer vary by season. In the fall, for example, expect apple and pumpkin, while summer brings peach and blueberry. Their mainstay is Berlin’s biggest food party: Bite Club, which goes down every third Friday in the summer. 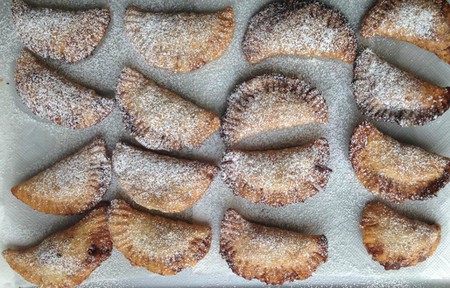 Another heavyweight in Berlin’s food truck scene is Bunsmobile. They were even voted one of Berlin’s best burgers at the annual Burgers & Hip Hop for their ‘Grandmaster Fleisch’, made with braised pork and gouda. In addition to burgers, they do things like grilled cheese and pork belly sandwiches. As the name might suggest, Bunsmobile is also touted for its fantastic buns. All things are made from scratch, including their natural wines, and the menu changes based on the season to include as many local ingredients as possible. In addition to their food truck operation, Bunsmobile also offers catering services. 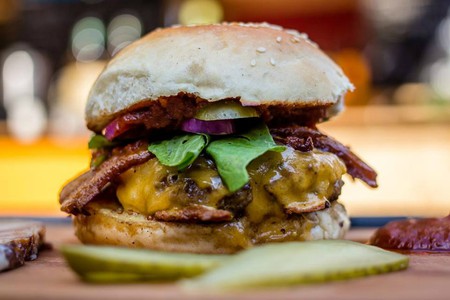 It’s no secret that good South American food is hard to find in Berlin. Maria Maria Arepas has come along to fix this for us. They serve gluten free food, which is a natural option since most authentic arepas are a type of flatbread made with maize flour instead of wheat. Maria Maria stuffs these with ever-changing combinations of naturally cultivated veggies and meats topped with their fresh, homemade salsas, tailored to complement the flavors of each arepa. This operation started at Street Food Thursdays, but has since become a fixture at dozens of different events each month. 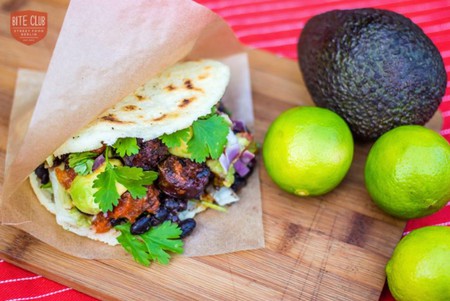 For something different in the street food realm, head to Singleton Whisky Bar, which specializes in custom-made whisky creations, winning culinary contests and gaining notoriety wherever they go. They offer a great variety of options ranging from classic to creative. They have minimalist single malt varieties of whisky as well as aged styles with flavors of honey and spices. Order your whisky neat, or opt for one of their many cocktails, which are carefully crafted to elevate the flavors of the whisky. Their whiskies are also featured in the BBQ sauces used at Bunsmobile and in the honey caramel whisky ice cream flavor by Jones Ice Cream, another food truck that deserves an honorable mention.

PIC NIC 34 is Berlin’s best Italian street food truck. Many might be wondering just what exactly Italian street food looks like. With the help of PIC NIC 34, we’re here to tell you. One of the most popular dishes served from the PIC NIC 34 truck is the piadina, a kind of grilled flatbread stuffed with irresistible Italian deli meats and cheeses. Here, they also sell meatballs, skewers with veggies and mutton meat, and a phenomenal salad featuring fresh buffalina. PIC NIC 34 are a popular fixture at Bite Club as well.

With famous weekend events like Thai Park and its robust Vietnamese community, Berlin certainly has its share of authentic southeast Asian food to try. Laksa brings some Malaysian cuisine to the table with this wonderful, warming soup. This vermicelli noodle soup is traditionally made with spicy coconut milk broth and fish, prawns, veggies, and tofu bits are cooked inside. They are known for their popup appearances around the city, so keep an eye out for Laksa Berlin as it graces the taste buds of hungry Berliner at various venues throughout the year. 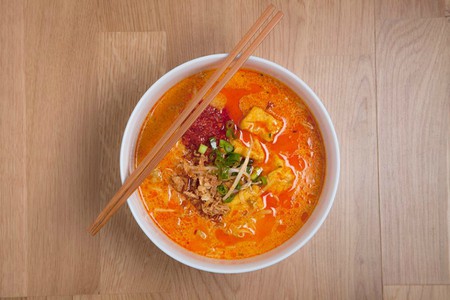 Appearing every second Thursday at Markthalle Neun, Mamas Banh is a Vietnamese vendor serving specialties like spring rolls and banh mi with salads and tasty sauces. Thanks to their light and flavorful menu options, Mamas Banh is an excellent healthy option with vegetarian and vegan variations amidst a sea of burgers, fried things, and desserts, that comprise Markthalle Neun’s impressive smorgasbord of options.

Tausendsuend Cakes is known for its exquisite cakes and delicate pastries. Laura, the passionate and talented lady behind the operation makes everything herself, with love. The recipes have an earthy, rustic feel, featuring decorations like fresh flowers and fruits on top. Not to mention, everything used in her cakes and pastries is organic. Many things are raw and vegan, too, including cheesecakes and her decadent dessert bars. 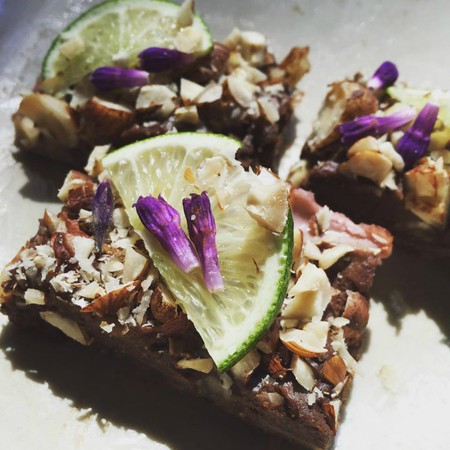 Of course, many food trucks offer options to cater to various dietary needs. This is Berlin after all, so we have to include at least one exclusively vegan spot. Sun Day Burgers don’t cut things short by way of flavors and toppings, making even the healthiest treat feel exciting and indulgent. Topped with a whole grain seeded bun and stuffed with veggies, sprouts, and three different kinds of sauces, this tofu burger is unparalleled. Pair it with a smoothie or the avocado lemon raw cake with a crust made of crushed nuts; it is delightfully creamy and surprisingly light. 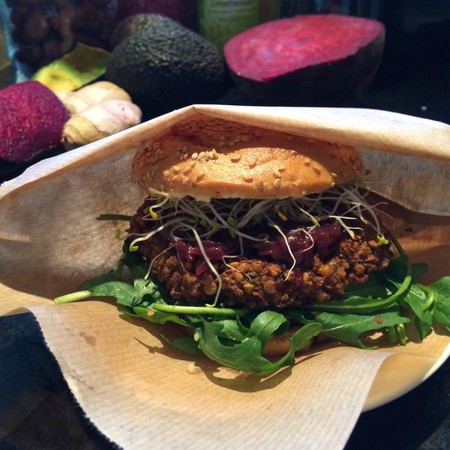