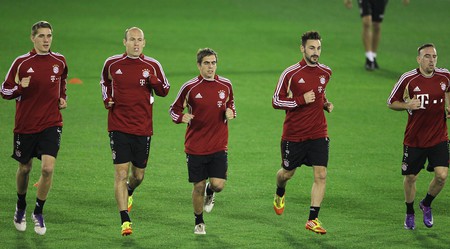 FC Bayern Munich and Apple Music recently announced an exclusive partnership. The German soccer club will generate exclusive playlists — from warm-up songs to celebratory tunes — as well as develop content and videos to help fans get closer to their favorite players and club.

The deal isn’t the first between a soccer club and music company. Spotify has an agreement with fellow Bundesliga side Borussia Mönchengladbach, while Deezer has exclusive deals with Manchester United FC (England) and FC Barcelona (Spain).

So, with Bayern and Apple’s latest announcement, we decided it would be fun to think of a song that represents a few players on the club based on their actions on the field or off it.

Manuel Neuer (goalkeeper) — Pink Floyd, “Another Brick in the Wall”

The 30-year-old is widely regarded as the best goalkeeper in the world. Neuer helped Germany win the 2014 FIFA World Cup, while winning the Golden Glove award as the tournament’s best goalkeeper. In 2014, he finished third in the FIFA Ballon d’Or award, given to the world’s best player.

While the Chilean midfielder has found success for club and country, his legacy may be tarnished by a drunk driving incident during the 2015 Copa América tournament where he crashed his Ferrari in Santiago, Chile. Vidal, 29, was given a two-year driving ban as a result of the incident.

The 33-year-old Dutch winger is elusive on the right side, weaving in and out of defenders to cut in on his left foot when he unleashes a shot at net. Yet, Robben has been criticized for the ease at which he goes to ground easily while looking to draw a foul or penalty. In fact, Robben has admitted to diving in the past, particularly in a 2014 FIFA World Cup match against Mexico.

The 33-year-old French midfielder’s fiery competitiveness is on full display every time he takes the field, yet he has a softer, joking side off it. He’s driven tractors onto fields and surprised teammates by pouring buckets of cold water on their heads. He has once said: “It’s important to always be smiling, to wake up and feel good. We have a great job, we like what we do and we have fun.”