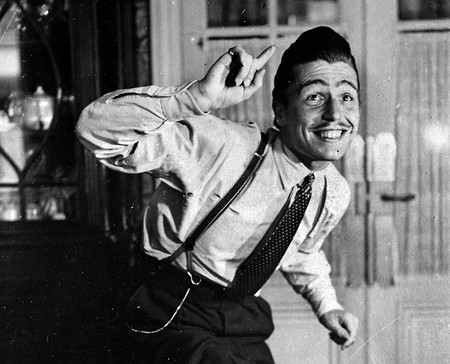 The guerrilla warriors, publishers, informants, and underground railroad operators of La Résistance waged a clandestine war against the Nazis and the collaborationist Vichy government; Les Zazous, with their outlandish fashion, passion for jazz, and shameless Anglophilia, opposed them every day on the streets of occupied Paris. In doing so, they inadvertently paved the way for the subcultures of the 1970s and the invention of clubbing.

Paris under the Vichy regime

While France was quick to fall to its German invaders – hostilities officially concluded after just six weeks on June 22, 1940, with the Second Compiègne armistice – resistance in all its forms sprang up almost immediately. With Prime Minister Philippe Pétain at its helm, the Vichy government set about imposing its ultra-conservative brand of morality on what it viewed as the nation’s feckless, corrupted youth. In July 1940, the regime established its Ministry of Youth to oversee their education, moral fiber, and productivity, along with the ominously titled ‘Youth Worksites’ where the necessary indoctrination would take place. 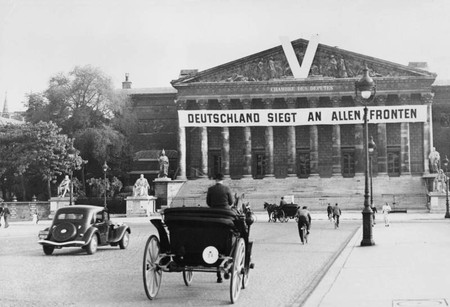 On the face of it, the French citizenry overnight assumed the role of an occupied people: increasingly obedient, gender-normative, and homogenized. But, in the capital most of all, the grim, gray swathe of submission couldn’t be tolerated for long. Anger, disgust, frustration and all the other emotions that coursed beneath the surface had their sounds and their colors and the Zazous were only too keen to give them voice and visible expression.

Their oversized suits were a reaction to government imposed fabric rations; the uncut hair, greased up in what was known as the mode à la Oxford, a blatant refusal to comply with a 1942 decree that ordered barbershops to donate clippings to the Axis war effort to be manufactured into slippers and sweaters. 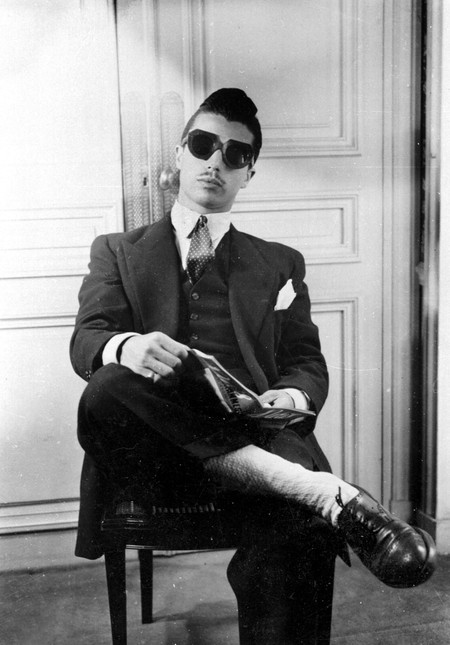 For men, the look was complemented by brightly colored socks, tiny mustaches, cotton or heavy wool ties, and ‘Chamberlain’ umbrellas, made popular by the British prime minister, that were kept tightly furled even in pissing rain: this was a political statement, after all, not a practical accessory. Female Zazous sometimes opted for striped or net stockings and wide-shouldered jackets, bold red lips and bleached blonde hair, a nod to their beloved Hollywood icons.

In his autobiography, Dior by Dior, which was published in 1957, the year of his death and a decade after he rose to fame with the unveiling of his ‘New Look’ collection, the legendary French designer critiqued the style:

‘Hats were far too large, skirts far too short, jackets far too long, shoes far too heavy… For lack of other materials, feathers and veils, promoted to the dignity of flags, floated through Paris like revolutionary banners. But as a fashion I found it repellent.’

Aesthetically, there may have been little he liked but the Zazou look in fact had much in common with his greatest fashion triumph: the voluminous shapes of the ‘New Look’ were also a deliberate departure from the constraints of the rationing era, an ode to light and levity.

During the interwar years, a healthy jazz scene had taken root in Paris. African-American artists, finding respite from the racial discrimination they faced at home, emigrated to the city, enriching the musical landscape and encouraging homegrown talent like Django Reinhardt to embrace swinging jazz. The clubs they played in Montmartre, at least before the Nazis’ crackdown on the music and people they despised, were the Zazous’ playgrounds. 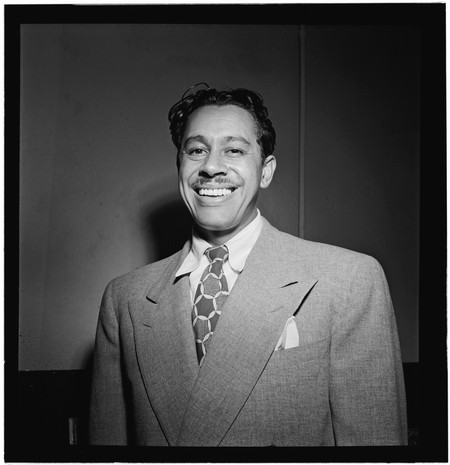 They got their name from the song Zah Zuh Zah by the American musician Cab Calloway, whose zoot suits were also clear inspirations of theirs, and the French singer Johnny Hess gave them another shout-out in his 1942 hit Je suis swing, which contains the unequivocally referential line ‘Za zou, za zou, za zou, za zou ze’ and, incidentally, sold more copies in France than any other record previously. However, it was Andrex who immortalized the subculture in his 1944 track Y’a des zazous:

‘Up until now a man could be black or white or yellow or red and that’s all / But a new race was born, it’s the Zazous. / A false collar up to the jaws with a jacket down to the knees, / Hair down the back, / That’s the Zazou, that’s the Zazou. / There are Zazous in my neighborhood / I’m half there myself / And one of these days, / You’ll all be Zazous like them, / Because the Zazou is contagious.’

The (body) language of defiance

Whether they were munching grated carrot salads (a tribal dish) on the terrace of the Pam Pam on the Champ-Élysées or sipping fruit juice or beer with grenadine syrup (the cocktail of choice) in the cellars of the Dupont-Latin or Capoulade in the Latin Quarter – the former being preferred by the middle-class Zazous and the latter by those who came from the capital’s working class – these youngsters, typically aged between 17 and 20, loved nothing more than throwing about English slang while trading British and American novels and vinyl records.

Refusing to keep their heads down like most Parisians, the Zazous would also draw attention to themselves with some signature choreography. Even in front of town halls and national monuments guarded by sentries and draped with the Swastika flag, they would yell ‘Swing!’, hop on the spot, scream, ‘Zazou hey, hey, hey, za Zazou!’, slap their hips three times, shrug their shoulders twice, and finish by turning their head to the side. 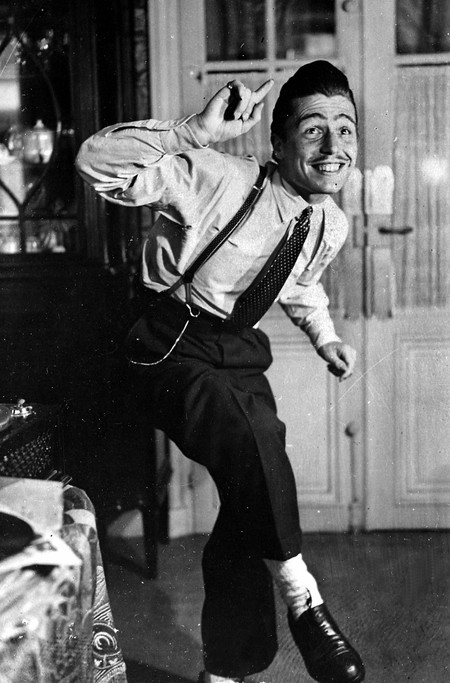 Far more than their slicked hair and curve-handled umbrellas, this rejection of the French language, in their minds tarnished by complicity, and adoption of the tongue of their ultimate liberators – whether in conversation or chant – is crucial to understanding the Zazous, not just as a style tribe but a potent cultural force.

The Zazou approach to protest grew increasingly political as the war intensified. When French Jews were required by law to wear the yellow star in a decree of June 7, 1942, they, too, strapped on the badge, often adding the words ‘Zazu’, ‘Goy’ (a Yiddish term for gentile), or ‘Swing’. Another show of solidarity, admittedly one that appears horribly misjudged to the modern observer, came from certain white female Zazous who blackened their faces to demonstrate their love of jazz and America. 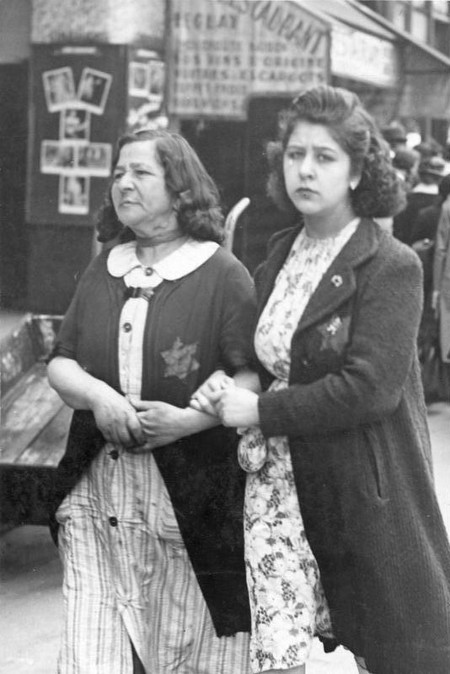 The potential of the Zazous’ tastes to destabilize the Nazi-Vichy program for France’s youth, and the immediacy and severity with which the regime intended to stamp out the subculture, can be felt in the vehemence of the attacks made against them in the collaborationist press. On June 25, 1942, La Gerbe stated:

‘We are having great difficulty in eliminating the venom of Americanism. It has entered our customs, impregnated our civilization. We must devote our utmost efforts against these transgressions of taste and bearing: the decline of critical faculties, the follies of […] jazz and swing, the contagion of our youth by American cocktail parties.’

‘Scalp the Zazous!’ became the rallying cry of Jeunesse Populaire Française, a fascist youth organization, and they soon followed through on this threat. Zazous were rounded up at their hangouts, beaten senseless in the streets, and shaved bald. Many were sent to work in the countryside and some were even deported to internment camps.

Faced with bodily violence, the Zazous went underground, gathering exclusively in cellar dance clubs and with decreasing frequency. It’s unclear exactly when the subculture died out, though some time in 1943 when exaggerating one’s able-bodiedness in public became life-threatening is considered most likely.

How should we remember the Zazous?

Aside from as a symbol of resistance in a time of widespread acquiescence, we can thank the Zazous, and their contemporaries across Nazi-occupied Europe, for providing a blueprint for all the continent’s youth counterculture movements of the 20th century. Without them, we might never have had mods or punks, teddy boys or glam rockers. Their penchant for dancing in basements also gave French music producer Eddie Barclay the idea of opening the first discotheque after the war.

You can also draw parallels between the Zazous and the French youth of today. Though the 21st century has its own economic, social, and political struggles, there is nothing like the kind of authoritarian oppression experienced during the 1940s. Nevertheless, Parisians take enormous pleasure in using English words and expressions, often erroneously and much to the annoyance of the Académie Française, in a seemingly obvious rejection of the linguistic stuffiness of older generations. What’s more, you only have to ask a local what they think of Marks and Spencer to understand the enduring appeal of all things British.

Finally, it’s worth considering that, in the vast scope of history, three years is a terrifyingly short time. It also happens to be roughly the time remaining for certain much-talked-about administrations (one hopes). Whether that’s long enough for a new regime-defying fashion subculture to emerge remains to be seen.