How To Spend Thanksgiving Like A True American In Paris 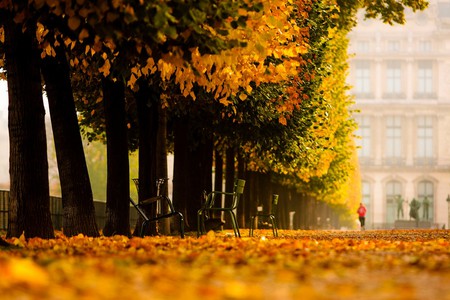 In 2016, around 50 million people will cross the United States, and the globe, in planes, trains, and automobiles in order to be home on Thursday, November 24th. If you’re an American in Paris who can’t make it back across the pond, or if you’re an enthusiastic non-American eager to learn what the holiday’s all about, we’ve got the information you need to make the most of Thanksgiving à la française.

Start the day with pancakes 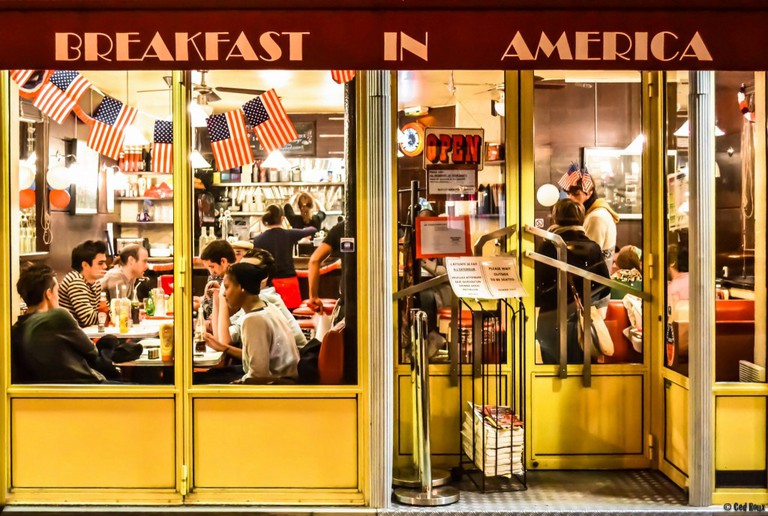 The facade of BIA2 | Courtesy of Breakfast In America
As anyone who has ever celebrated Thanksgiving knows, the day will require every ounce of energy you can muster and so it’s essential you start with a hearty breakfast of pancakes. For the best in town, head to Breakfast in America – so good are they that the restaurant’s owner, Craig Carlson, has recently penned a New York Times Best Seller in their honor: Pancakes in Paris. BIA will also be hosting three seatings of Thanksgiving dinner at their 5th arrondissement diner – information on how to book can be found here.
Open In Google Maps
4 Rue Malher, Paris, Île-de-France, 75004, France
+33142724021
Visit Website
Give us feedback

Find (and cook) a turkey

In the U.S., some 46 million turkeys are consumed on Thanksgiving (and, presumably, given that their combined weight is more than ten Empire State Buildings, in sandwiches for days afterward). In France, you might find it a little more challenging to find a bird of quite the same bulk. Two artisan butcher shops in Paris to try are Hugo Desnoyer in the 14th and 16th, and Milo in the 11th. For quality halal poultry, Les Jumeaux in Les Lilas comes highly recommended. Once you’ve got your bird, you have a tough decision to make: to roast or to deep fry. 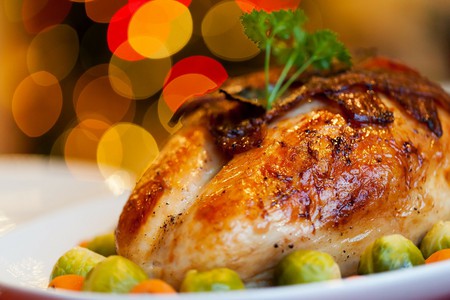 Pick up all the trimmings

For all the ingredients you need to prepare essential side dishes – stuffing, cranberry sauce, and pumpkin pie – there is a dedicated store, the exceptionally well-titled Thanksgiving, waiting for you by the Marché Saint-Paul in the Marais. It also stocks American candies that, while not necessarily a part of the traditional feast, are worth sampling if you’re not familiar with them. For vegetables like sweet potatoes and corn that you might struggle to find in French supermarkets, head to the Marché Dejean in Little Africa in the 18th.

Park
Facebook
Email
Twitter
Pinterest
Copy link
Share
Map View
This Thanksgiving tradition has a lot more to do with Modern Family than it does the original pilgrims and Native Americans, and it might well get you into trouble with the French authorities, but it’s worth including on this list for its simple American exuberance. To put a Parisian twist on it, pick up a pumpkin or large squash at the Marché Saxe-Breteuil, head towards the Eiffel Tower, and see how far, and how inventively, you can launch your veg up the Champs de Mars.
Open In Google Maps
Paris, France
Give us feedback

Check out some American art

Museum
Facebook
Email
Twitter
Pinterest
Copy link
Share
Map View
While a trip to a museum isn’t part of most people’s holiday traditions, this year’s coincides with the America After the Fall: Painting from the 1930sexhibit at the Musée de l’Orangerie. It contains more than 50 works by artists like Marsden Hartley, Georgia O’Keeffe, and Edward Hopper, on loan to the Paris gallery from the Whitney and MoMA in New York, and the Art Institute of Chicago. Even if you don’t make it on Thanksgiving, you have until January 30, 2017, to see the show.
Open In Google Maps
Paris, France
Give us feedback

Fans of the NFL will be happy to hear that the big games will be shown at a number of sports bars in Paris. The first game between the Vikings and Lions will be shown at 6:30pm local time and the second between the Redskins and Cowboys at 10:30pm. Belushi’s on the Canal Saint-Martin will be showing both, as will Wos Bar in central Paris. The other major television spectacle of the day, the Macy’s Thanksgiving Parade, will be harder to watch due to licensing issues.

Do some good in the world

Shop
Facebook
Email
Twitter
Pinterest
Copy link
Share
Map View
Finding time to do some charity, particularly donating food, is another important aspect of Thanksgiving. This year, perhaps the best way to do this in Paris is to go to, or support in some other way, the Beats Across Borders #3 concert organized by the Sciences Po Refugees Help association in conjunction with L’Alimentation Générale. Tickets are 7€ and all proceeds will go towards projects that help those displaced by conflict. The line-up will include artists and DJs from around the world.
Open In Google Maps
Paris, France
Give us feedback

Church, University
Facebook
Email
Twitter
Pinterest
Copy link
Share
Map View
Every year, the American Church in Paris puts on a Thanksgiving feast that is open to anyone (so long as they register in advance). The church team takes care of the turkey and the main sides, but guests are encouraged to bring something along to share like a dessert, cheese, or specialty dish. For 2016, the event is raising funds for Baytna à Vous (Our Home for You), a student-led initiative at the American University of Paris, with a focus on the Syrian refugee crisis in France.
Open In Google Maps
Paris, France
Give us feedback

Go out for a Thanksgiving meal

If you can’t face cooking or don’t have the kitchen space in which to do it properly, then head out for dinner on Turkey Day. Coffee Club, renowned for its delicious homemade meals, is putting on a special menu for the holiday. You can also walk it off in the Jardin du Luxembourg, which is just seconds away. Other restaurants in the city catering to the Thanksgiving crowd are Joe Allen in the 1st and Philippe Excoffier, the former chef at the American Embassy in Paris, in the 7th. 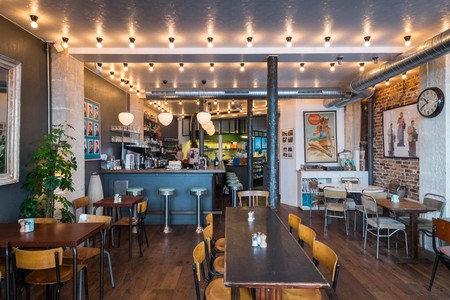 Finish off the holiday with an American nightcap

Bar, American, $$$
Facebook
Email
Twitter
Pinterest
Copy link
Share
Map View
There are a couple of American bars in Paris, like American Dream and Bugsy’s, but the favorite of locals and foreigners alike is undoubtedly Harry’s Bar. Worth a visit on any day of the year, Thanksgiving is a particularly good time to drop by as it just so happens to be its birthday. Opened on November 26, 1911, the birthplace of the Bloody Mary will this year turn an impressive 105 years old.
Open In Google Maps
5 Rue Daunou, Paris, Île-de-France, 75002, France
+33142617114
Visit Website
Give us feedback
Give us feedback