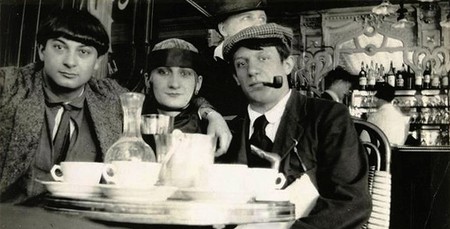 There’s hardly a name in 20th century art that didn’t once sojourn in the French capital but Pablo Picasso was at the center of its cultural scene from 1900 until he left indefinitely for the Riviera in 1967. Our guide to the Spanish master’s Paris includes the studios where he created his greatest works, the sites that inspired him, and the bars he hung out in with his cohort of creative geniuses.

After three trips to Paris in the first three years of the 20th century, Picasso moved to the capital in 1904 and took up residence at the Bateau-Lavoir at 13 Rue de Ravignan in Montmartre. The building was on the doorstep of the bohemian neighborhood’s many attractions and distractions and it, too, became a meeting point for the local artistic set, which included Henri Rousseau, Guillaume Apollinaire, Marie Laurencin, André Salmon, Georges Braque and Gertrude Stein. It was here that Picasso painted his proto-Cubist masterpiece Les Demoiselles d’Avignon in 1907. 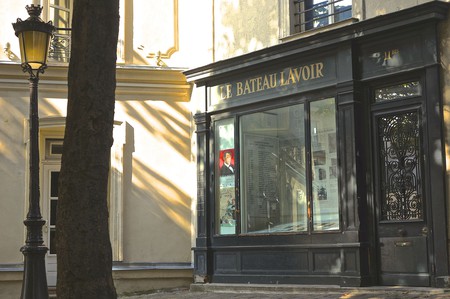 After his honeymoon in 1918 with Olga Khokhlova, the ballerina he met while working on the sets and costumes for the Ballets Russes, Picasso moved into an apartment found for him by his art dealer Paul Rosenberg, who also represented Henri Matisse, Georges Braque, and Fernand Léger. The pair formed a lifelong friendship, summering together in the South of France with the likes of F. Scott Fitzgerald, Somerset Maugham, and Igor Stravinsky. Picasso painted at No. 44 and exhibited at Rosenberg’s gallery at No. 21. 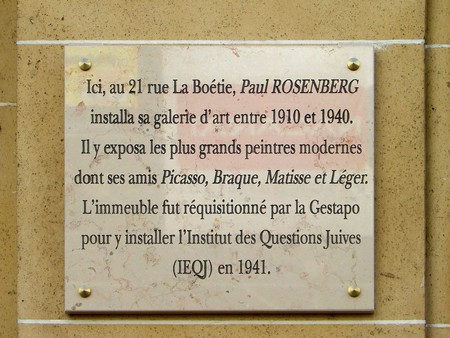 In early 1937, Picasso set up his new studio at 7 Rue des Grands-Augustins on the Left Bank. On April 26, the German air force bombed the town of Guernica in the Basque Country, killing 4,000 people in a matter of hours. Soon after, Picasso began the studies for what would become arguably his most famous painting. Guernica was presented for the first time at the International Exhibition in Paris on July 12. Picasso lived in his studio throughout the Occupation and kept it until he was evicted in 1967. 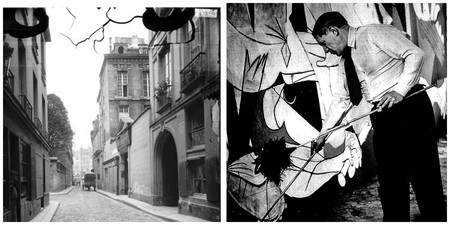 While living in Montmartre, Picasso and his poet friends Apollinaire and André Salmon frequented the Cirque Medrano, which once resided at 63 Boulevard de Rochechouart. The circus was founded in 1875 and was a favorite hangout (along with the Moulin de la Galette and the Moulin Rouge), of the neighborhood’s old guard of artists like Renoir, Degas, and Toulouse-Lautrec, all of whom came to sketch as well as to socialize. Today, you’ll find a Carrefour supermarket at No. 63 but the Cirque Medrano still exists as a successful traveling circus.

Another Montmartre haunt of Picasso and the bohemian set was Au Lapin Agile, one of the oldest and most beloved cabarets in Paris. The low pink building, partially hidden behind vines and pines, is located on the north-facing side of the hill at 22 Rue des Saules. It was here that the artist met Fernande Olivier, with whom he had a seven-year relationship and who inspired one of the Demoiselles d’Avignon. The cabaret is still going strong, and its show, Songs, Music, Poetry, plays every evening from Tuesday to Sunday. 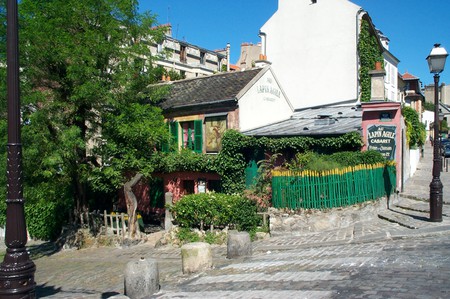 The Café de la Rotonde was where Paris’ intellectual circles gathered during the first half of the 20th century. Founded by Victor Libion in 1911, it attracted struggling artists who were welcome to sit at their tables all day for the price of a 10-cent coffee. If even this bill was too steep, Libion would accept payment in the form of a drawing, hundreds of which lined the walls. It was here that Picasso spent many an evening in the years before his first marriage. 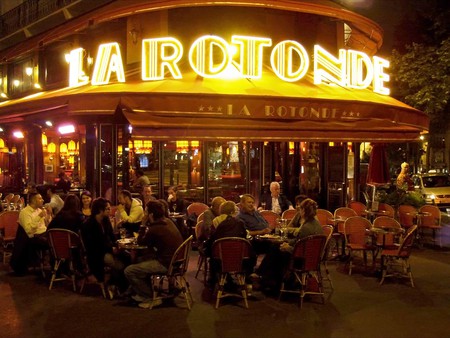 Picasso first came to Paris in September 1900 with his friend Carles Casagemas. While Picasso was living in Madrid in 1901, Casagemas committed suicide in the Café de l’Hippodrome at 128 Boulevard de Clichy, apparently over a fallout with Germaine Pichot, another of the Demoiselles. The trauma of this is said to have been the catalyst for Picasso’s Blue Period. During this time, he often studied the sick at the Hôpital Saint-Lazare at 107 rue du Faubourg Saint-Denis. The fruits of this research can be seen in La Mort de Casagemas (1901). 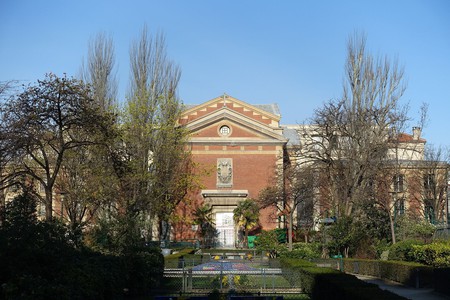 A frequent visitor to the Louvre in 1906, Picasso became obsessed with Iberian art, which consisted mostly of sculpture made between the 5th century BC and the Roman conquests. In 1907, Picasso acquired two Iberian stone busts from Géry Pieret, the secretary of Apollinaire. However, in the aftermath of the theft of the Mona Lisa in 1911, it transpired that these, too, had been stolen from the museum. Apollinaire was arrested amidst widespread scandal. Fernando Colomo’s Picasso’s Gang (2012) offers a lively retelling of this chapter in the artist’s life.

On July 12, 1918, Picasso married Olga Khokhlova at the Cathédrale Saint-Alexandre-Nevsky de Paris, a spectacular Russian Orthodox church in the neo-Byzantine style at 12 Rue Daru. The wedding was the event of the season for the Paris art world, with the intellectual powerhouse trio of Jean Cocteau, Max Jacob, and Guillaume Apollinaire acting as Picasso’s groomsmen. The church, which also contains the grave of Wassily Kandinsky, is open for visits on Tuesdays and Fridays from 3PM to 5PM and on Sundays from 10AM to 12:30PM and 3Pm to 6PM. 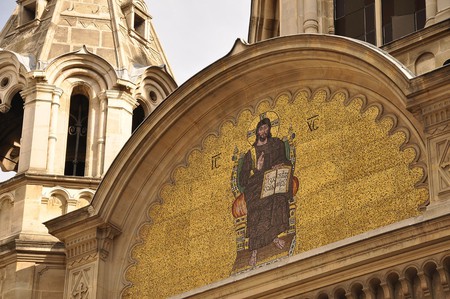 In 1941, while hunkered down in his studio and struggling with a shortage of materials, Picasso worked on a plaster-modelled, bronze-cast bust of Dora Maar, a French photographer and his lover at the time. Four copies of Tête de femme were made after the war ended and one was placed in the Square Laurent-Prache in 1959 as a memorial to Apollinaire. The sculpture was stolen in 1999 but thankfully recovered and restored. Around the corner from this Saint-Germain park is the café Les Deux Magots, another popular hangout of Picasso’s. 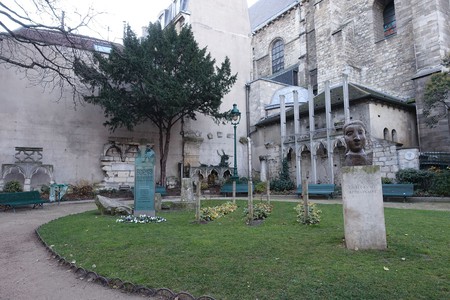 The first place to head to see the artist’s work is the Musée national Picasso-Paris on Rue Thorigny in the Marais. The museum was extensively renovated in 2014 and its 5,000-item collection, which includes paintings, sculptures, sketches, and ceramics, is spread over the four floors of the mansion house. All of the works were donated to the French government by Picasso’s family as an alternative means of paying their sizable inheritance task. As well as masterpieces from throughout his career, a highlight of the €12.50 visit is the rooftop café. 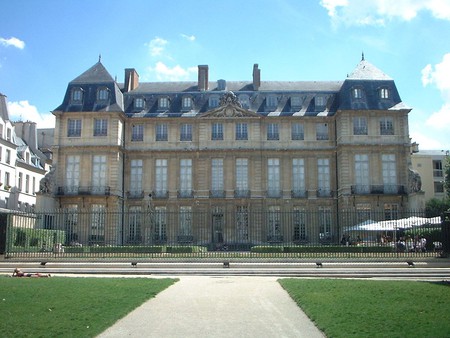 In 1947, on the suggestion of museum directors Georges Salles and Jean Cassou, Picasso made the first of his major donations to the Musée National d’Art Moderne in Paris, which is now housed in the Centre Pompidou. The museum has since acquired more of the Modernist giant’s works and they are shown alongside his artistic contemporaries and real-life friends in both permanent and temporary exhibitions. 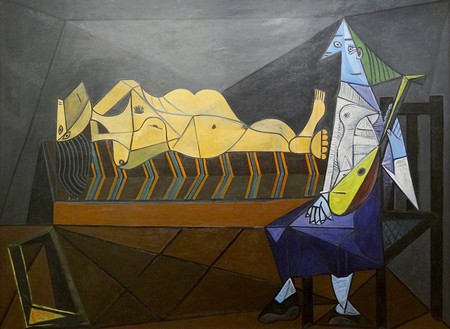