How to Navigate Lyon’s Public Transport 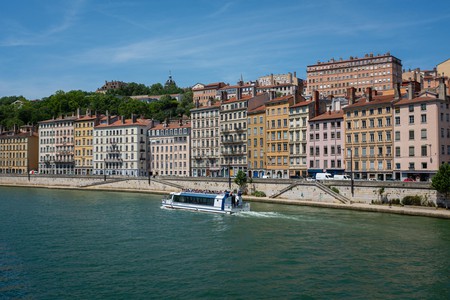 There’s no shortage of ways to traverse Lyon, whether by cable car in the sky, a vintage tram through the historic district or a ferry boat down the Rhône river. Here’s how to navigate the city’s public transport.

Though Lyon is the third largest city in France, cars are frowned upon, with visitors and residents alike putting a focus on walking, biking and boating through the city. The city’s UNESCO-designated weaving streets and alleys are often too narrow for cars, but luckily for visitors, the city’s methods of transit comes in multitudes: there are trams, trolleys, boats, trains, buses, taxis and scooters. All are part of the city’s initiative to push sustainability to the forefront through affordable, accessible transit. Lyon’s residents can look to reliable trains and buses, and visitors to the city can hop aboard traveller-oriented taxis with knowledgeable guides. Here are the best ways to get around Lyon.

Under Lyon’s historic streets runs a web of efficient subway trains, alternatively known as TCL (Transports en Commun de Lyon). Lyon’s train system spans four lines that altogether weave seamlessly to every area of the city. A web of connected buses and trams makes it simple to scale all areas of the city.

The most affordable option for any visitor is to opt for a Lyon City Card. One-, two- or three-day options are available – €25 (£21.90) for one day, €35 (£30.60) for two days and €45 (£39.40) for three days for adults. The pass allows for unlimited use of public transportation and entry to major tourist attractions, including all major museums (Lumière Museum, Musèe de Confluences, Gallo-Roman Museum, Fine Arts Museum, Jean Couty Museum) and tours. The card also provides a reduced rate on many alternative forms of transportation, including the Cyclopolitain, the tram system, and cycle and bike tours. 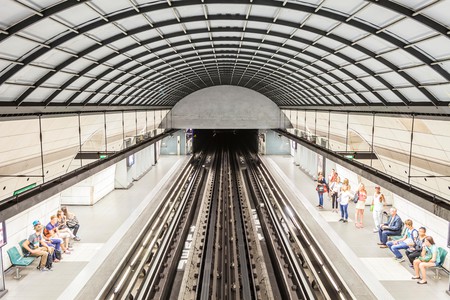 Lyon’s funiculars are one of the world’s oldest rapid transit lines, linking together the top and the bottom of Lyon’s Fourviere Hill. The first funicular – ‘la ficelle’, or ‘thread’, as residents lovingly dub the lines – opened in 1862, linking together Rue Terme and Boulevard de la Croix-Rousse. Four additional lines opened over the early 1900s, though two remain today, linking Vieux Lyon (old town) to the Fourviere and Saint-Just. Never fear, the cable cars have been updated since the 1800s, though the retro red exterior and gold paint have been kept.

The funiculars are both the easiest way to get up the hill and one of the best ways to see the city. The climb up the tracks provides panoramic views of Lyon. Rides up are brief and surprisingly smooth, considering the tracks are more than 100 years old. The most popular route links the Tour Metallique (Lyon’s answer to the Eiffel Tower) on Fourviere Hill to Saint-Paul and the Basilica on the Fourviere with Saint-Jean.

Rides are included on the Lyon City Pass or a regular metro card. If you don’t have one of these options, you can also pay €1.90 (£1.70) for a single ride. Funiculars depart the stations from just after 5am in the morning and operate until midnight. 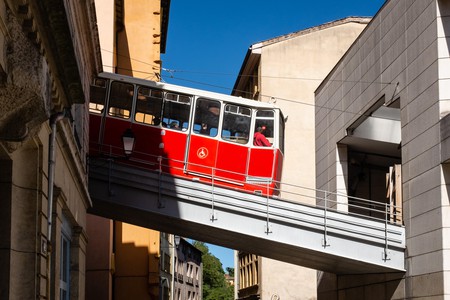 La ficelle is the Lyonnais nickname given to the funicular in Lyon, which is famous for being one of the world’s oldest rapid transit lines | © FRANCK CHAPOLARD / Alamy Stock Photo

Consider peddling your way through Lyon. The city actively welcomes cyclists: there is a network of bike-friendly paths down the Rhône, and residents often cycle around the city during the summer months. You can hire Lyon’s signature red-and-silver bikes at any of the bike stations throughout the city, peddle to your destination and leave your bike at a convenient station.

To get started, simply pick up a carte courte durée and top-up with credit using any chip-enabled credit card at the bike station. Note that many of the bike stations do not accept certain international credit cards. Stations are open 24/7 and charge a flat fee of €1.50 (£1.30) for 24 hours and €5 (£4.40) for seven days. If you’re going a short distance, the first half hour is complimentary.

If you don’t feel like peddling yourself, hop aboard a tourist taxi, dubbed the Cyclopolitain electric tricycle taxi. Similar to an electric rickshaw, this chain of eco-friendly bicycle cabs are also available in Paris, Reims, Tours and Nice. In collaboration with Lyon’s tourism board, all drivers speak English, and will peddle you to your destination while providing historical background and commentary on the routes they take, pointing out landmarks on the way. Reservations can be made in advance or at the tourist office at Place Bellecour. Trips average €50 (£43.75) for two hours and are discounted with a Lyon City Card. 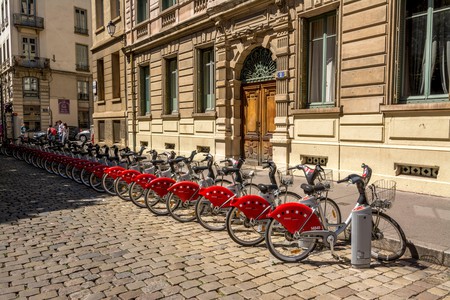 Travelling by boat is arguably one of the most scenic ways to see the city. Lyon sits at the meeting point of the Saône and Rhône rivers, both of which wind through the city and divide it into three groups. To the west of the Saône lies Vieux Lyon, the Fourviere and the plateau beyond that. A trip will showcase how the historic architecture of Lyon, particularly Vieux Lyon, was informed by merchants of Venice. As you move down the river, watch the landscape change as modernist buildings appear on the shoreline.

Le Vaporetto operates ferry boats, or navettes, that depart from Vieux Lyon and loop down the river to the Confluence district, home to one of the city’s most beloved science museums of the same name. Tickets are €4 (£3.50) a ride, and boats leave every 80 minutes from the docks on the Saône. Each ride takes between 20 and 30 minutes and is perfect for sightseeing or commuting.

The Lyon City Card includes a sightseeing boat tour, which takes a similar route but includes commentary in both French and English. The tour sails passengers by Ile Barbe, an island in the middle of the Saône in the ninth arrondissement. 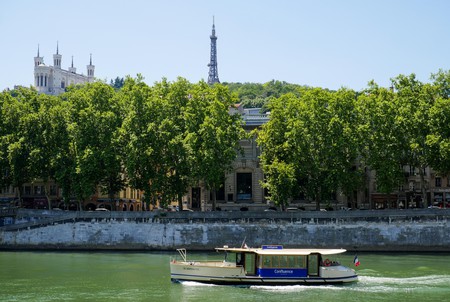 Much of the city’s history can be discovered by popping around corners and ducking down traboules – tiny passageways once used by silk workers to haul merchandise across the city without getting slowed by commuter traffic. Practicality-wise, many of the city’s streets and bridges are only for pedestrians. Many more are one-way, making it a frustrating experience to drive, particularly in the old district of La Croix Rousse, where streets are steep and narrow. The city is laid out in arrondissements, or neighborhoods, and all are threaded together by easy-to-navigate footpaths and splendid waterfront walks.

As the city’s streets twist and wind, be sure to download Google Maps or Waze ahead of time and preload the map – it is easy to get turned around in the maze-like streets of the old city. 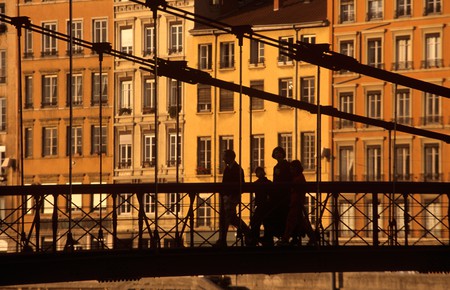 Although Lyon is known for its maze-like passageways, the city is very easy to navigate on foot | © Glyn Thomas / Alamy Stock Photo

If you are out late, or travelling a longer distance with heavy luggage, the city has a selection of taxi options. Keep in mind that Lyon is far easier traversed by foot, metro or a bike as the city’s streets are narrow, winding and sometimes congested, making it expensive and time-consuming to traverse the city in a vehicle.

The best place to flag a taxi is outside both train stations: Gare de la Part Dieu and Gare de Lyon-Perrache. You can also hail one on Rue de la Barre in the second arrondissement, on Rue du President Edouard Herriot in the first, and along Quai Romain Rolland in Vieux Lyon. If you can’t make it to a pick-up location, look for an Allo Taxi or Taxis Lyonnais, the most trusted taxi companies in the city (or call one via the Taxi Lyon app).

All taxis are metered, so prices are according to distance, though there is a small fee for luggage. Tipping isn’t a necessity, though if the service is particularly excellent, feel free to round up or add an extra euro.

The city embraces both Uber and Lyft, and ride-sharing apps are common in the city. Both apps offer a range of vehicles and cost options. You can even opt for UberGreen – a ride driven by an electric or hybrid vehicle.

To get into the city from the Lyon-St Exupery international airport, a Rhonexpress TGV (France’s national railway system) station connects the city to the terminal in just 29 minutes. The train operates from 4.25am to midnight everyday. Tickets cost €16.30 (£14.25) purchased at the airport, or €15.20 (£13.30) ahead of time. Note that tickets are free with a Lyon City Card. Alternatively, a local bus (€16.30/£14.25) loops travellers from the airport to the city center and runs from 6am to 11pm. If you do plan to purchase a Lyon City Card, do so before you get to the airport as it will save you waiting in line.

Once you’re in the city, Lyon’s tram network is a simple way to travel around the city. Five tram lines loop the city, including outer boroughs like Villeurbanne and Bron. Purchase tickets (€1.80/£1.60) from the machines that dot the city, or from a driver (€2/£1.75). All machines will have the option to switch to alternative languages. Note that one metro ticket is valid across all metro lines, so feel free to jump between the tram and metro, as long as you stay within the time limit. Note that rush hour is between 8am and 6pm, so you’ll find the trains more packed between those times. 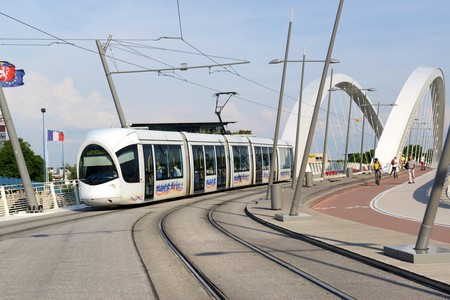 From Villeurbanne to Bron, Lyon has five tram lines that span across the city | © David Bagnall / Alamy Stock Photo
Give us feedback