How Lyon Became the Epicentre of Europe’s Silk Industry 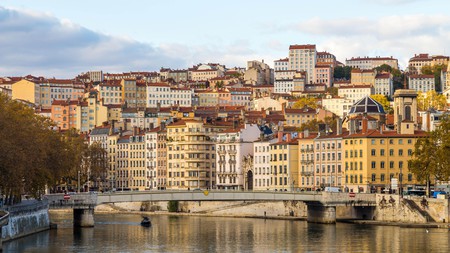 Lyon has a long, lauded history of producing some of the most stunning silks in the world. Today, the tradition reigns, with major fashion houses looking to Lyon as the industry’s silk expert. This is the fascinating history on how the city gained that reputation.

In Lyon, a labyrinth of over 400 tunnels and passageways – or traboules – weave together through the Croix-Rousse district. These discreet doors and subtle staircases are remnants, mementos perhaps, of the history of the city’s silk industry, a once-thriving industry that fuelled the city for centuries. 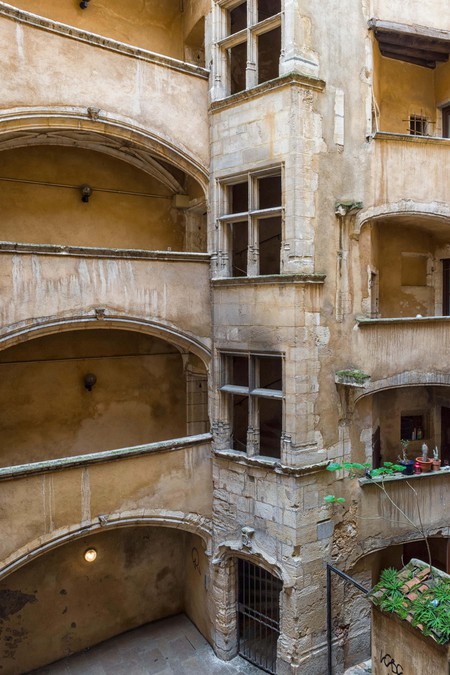 The traboules reflect just how storied the city’s silk history is. They were once used to connect small weaving studios to the Saône River, where the materials would be shipped near and far. During the silk revolutions of the 17th and 18th centuries, they were battlegrounds: strongholds for the silk workers (or canuts) as they protested their poor work environments. During World War II, the traboules were hideaways, used for relaying secret messages between sides and spies.

Lyon’s silk history began on the banks of the Saône River. Weaving was done in the Croix-Rousse era for decades, a staple of the local economy with looms manned by dozens of local women. It was a humble trade, fuelling local pockets and keeping the community afloat. 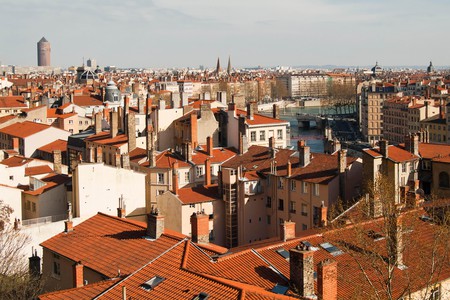 But in the Renaissance, grand expositions held in the city gathered the attention of rich merchants from near and far. They were taken by the high-quality hand-crafted silks, prompting King Louis XI in 1466 to start fuelling money into the city to turn the small circle of silkweavers into a grand silk manufacturing hub.

The shiny, new manufacturing centre particularly charmed elegant Italian merchants. The most famed among them, Italian merchant Turchetti. He stuck around the city and opened up a silk workshop in the Croix-Rousse. He brought in disadvantaged girls and women from Lyon, and taught them the traditional process of Italian silk winding and spinning. As more women picked up the trade, the industry grew in knowledge and size, and soon, became the French capital of a booming fabric industry.

Lyon’s shimmering silks had quickly become the apple of French aristocrats’ eyes, who started purchasing up yards on yards and spinning them into high fashion garments. Silk was expensive to buy and often referred to as a status symbol.

In an effort to centralise the country’s prized industries, King Francois I gave Lyon a monopoly on raw silk imports in 1540, ensuring that all fine silks coming into France from Italy or Asia first stopped in Lyon. Lyon was also a natural conduit for trade – the city’s location at the confluence of two rivers, and proximity to northern and southern France made Lyon the perfect place to start the silk road. 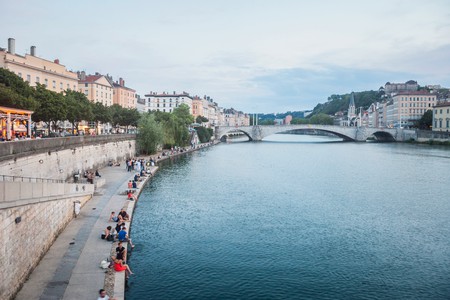 But the silk industry stumbled in the 1600s, when the revocation of the Edict of Nantes drove the French Huguenots, many of whom were textile experts, out of the country – and with them, their expertise and experience in the trade. Most settled in Germany, Great Britain, Italy and Switzerland.

For ages, the silk industry chugged along, slowed, but from 1789 to 1797 the silk industry went quiet. Thousands of workers were guillotined or shot during the French Revolution, as skilled labour disappeared or hid. Their prized drawings, fabrics and designs were destroyed, and the silk industry slowed to a halt. The industry was reduced by 90% in under a decade. 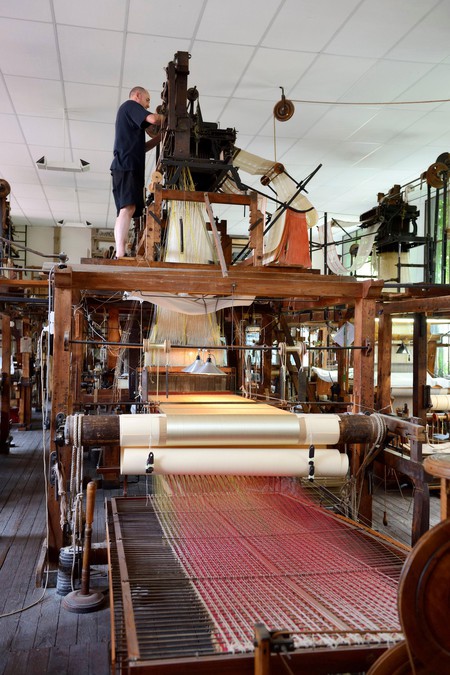 But it swung back, and by the 18th century, silk production was once again the pillar of Lyon’s economy. Mechanised Jacquard looms had just been introduced, boosting the city’s outputs. Over 28,000 workers had looms, working away to weave luxurious silks that would be sent the world over.

Napoleon Bonaparte and Joséphine came to the city soon after, which shined a new light on the city’s silks. The French bourgeoisie clambered after the city’s silks, in turn, pushing innovation. New inventions in fabric dying were introduced, making the city’s wares more in demand than ever.

By this point, the silk industry accounted for 75% of Lyon’s total industrial activity – with over 100,000 looms in operation.

But this period of renaissance was short-lived. In 1831, the silk industry hit a fever pitch, with the disparity between worker and merchant growing increasingly tumultuous (at this point, almost a quarter of the city worked in silks). The canuts – or silk workers, all under the employment of wealthy silk merchants – revolted, angry at the wages and price of their work and their exhaustive working conditions. (For reference, there were 308 merchants who directed over 25,000 silk workers and weavers.)

They took over the Croix-Rousse district, the heart of the silk industry, pushing merchants and military out and holding off the soldiers for weeks until 2 December, when the army reclaimed the city, and peace was negotiated.

Three years later, a second revolt overtook the city. The canuts held the city for nearly a week, until 12,000 soldiers swarmed, killing hundreds. The industry stumbled, but slowly rebuilt itself. 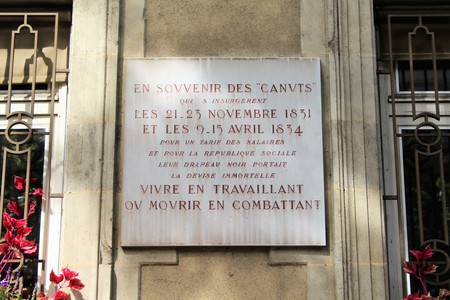 Today, the city is still a hub for silk production. Though canuts have been replaced with automatic looms, their history is still present (even in the form of local dishes: cervelle de canut is a popular local food, comprised of a herby cheese dip).

But silk as a trade still thrives: many silk makers have turned to specialised skills, like the restoration of historic fabrics or work with some of France’s biggest haute-couture creators. Lyon is still the go-to destination for designers looking for top-quality silks. Chanel and Hermès both hold court here, looking to Lyon’s rich history to weave their famed silks.

Visit the Maison des Canuts, the silk museum, to see working Jacquard handlooms and explore the city’s history. To buy real silks (sans the price tag of Chanel or Hermès) head to L’Atelier de Soierie, a silk shop in the historic silk capital of Croix-Rousse. Every scarf is made by the owner using traditional methods. She’ll be happy to show you the process in the rear of the store.

Or, stroll the Colline de la Croix-Rousse: you’ll find ‘traboules’, a series of small tunnels and passageways that weave through the area. If the walls here could talk, they’d have many stories to tell. 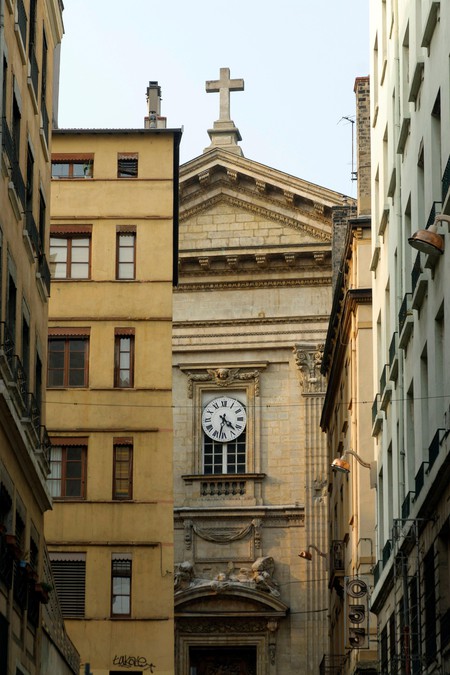