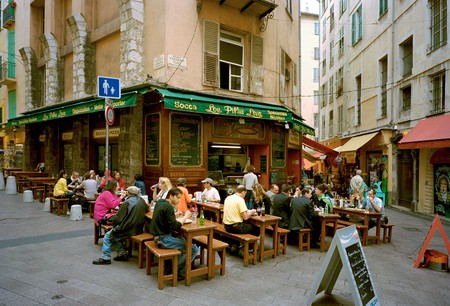 Socca, a pancake that originates from Nice and the neighbouring Italian coastline, is quick to cook, cheap to eat and incredibly satisfying. Culture Trip looks at the history and traditions behind this classic Niçois street snack. 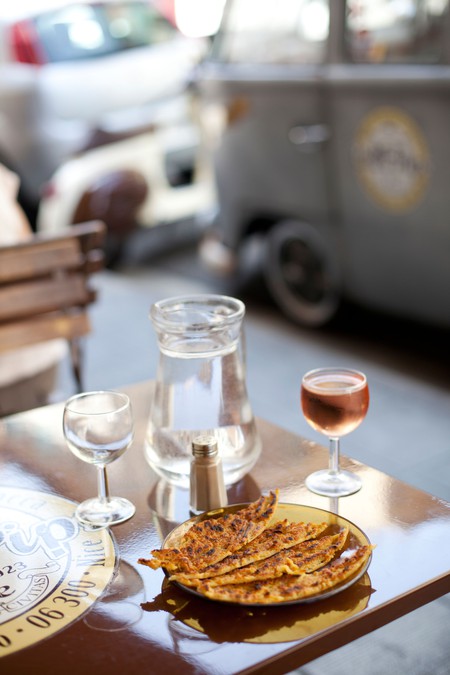 Nothing embodies the spirit of the Côte d’Azur quite like socca – the chickpea pancake found from Provence to Liguria. These smoky, satisfying wedges of fried batter, chopped up unglamourously and doled out among handfuls of napkins, are the true flavour of Nice. The salad niçoise is Nice at its most respectable; socca, doused in olive oil and rock salt, is the city with its hair down, throwing caution and calorie counts to the wind. (No wonder it goes so well with rosé.)

The legend of its creation is an entertaining tale. One story goes that the Roman forces once stationed in the area that is now modern-day Nice would light a fire under their shields and use the platform as a griddle top to fry their hasty mix of chickpea flour and water. Another purports that socca was born under siege, as the people of Nice sustained themselves in times of Turkish invasion with the two cupboard staples they had – chickpea flour and olive oil.

The truth, however, is unclear. Socca’s origin is aggressively disputed by different towns, cities and even countries. To the Genoese, it’s called farinata, and is served as an alternative to freshly baked focaccia. To the Marseillais, it’s known as panisse, and the batter is set and cut before frying. You can find versions of socca in cities across Sardinia, Gibraltar, Algeria and Argentina. The likely origin story is that all of these cities – busy, hungry port cities – swapped recipes with one another somewhere along the line and forgot to keep track.

If you are in Nice and you’d like to try a slice of socca, take a walk around the city and you’ll eventually hear the calls of “Socca, socca, caouda que bullie!” – meaning “Socca, socca, scorching hot socca!” – coming from the street sellers. They won’t be lying either; very often they’ll be cycling from the oven to the market square with the tin of socca, fresh from the wood-fired oven, with the pan of socca rigged up on the front of their bicycle. The renowned French chef Daniel Boulud writes that, “Socca is so popular in Nice that you’re as likely to be knocked down by a socca delivery man … as you are a pizza man in Gotham.” This is the way that socca has been sold for centuries in Nice, snatched up by tired sailors and Riviera revellers alike. 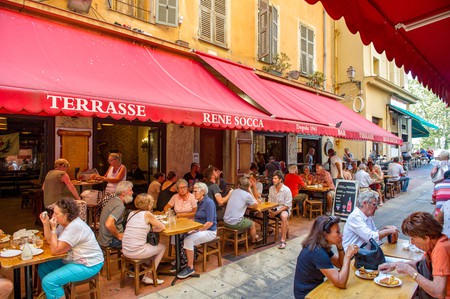 The traditional way of cooking it is via a roaring wood fire, a cast-iron pan, chickpea flour, water, olive oil and salt. Simple in theory, but a real challenge to master. The oven has to be heated evenly to the right temperature – hot enough to cook the batter and crisp the edges without burning the socca or leaving it soft in the middle. The flour has to be unroasted so the sweetness of the chickpea comes through. The batter must be rested so the starch can gelatinise and the pancake can cook without splitting. And the olive oil has to be good, as there are few things as insulting to the Niçois than bad olive oil.

If you want to try an authentic slice of socca, head to the Cours Saleya market in the city centre, and visit Chez Thérésa. ‘Thérésa’ has been serving socca on the same corner since 1928 (not literally, of course – the name has been passed down from seller to seller). Thérésa’s socca is crispy, salty, oily and tinged with smoke. Heed the advice of food writer David Lebovitz and get there before 1pm: “She runs out around 1pm and when she’s done, that’s it for the day. Très provençal … eager for more, I [once] arrived at 1.02 and had just missed her last batch.” Buy yourself a slice while it’s still a little bit too hot, take it in your napkin, find a quiet corner overlooking the sea and, with the optional glass of rosé in hand, enjoy.

Should Thérésa be all out, however, don’t despair. Even an average socca in Nice is better than what you’d find anywhere else, and fortunately, there are plenty more spots with exceedingly good trays of it. Lebovitz offers one off-the-beaten-track suggestion: Chez Pipo, a little farther from the market but just as busy as its city centre counterpart. Its super crispy soccas are not ordered by the slice but by the plateful – and with the size of the queue, ordering multiple is strongly advised. It won’t be your last. 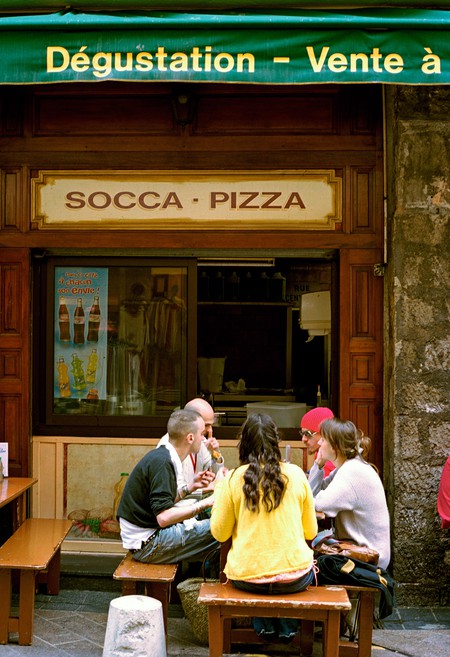 Corner shops, street sellers, bars and restaurants all dish out socca by the slice | © Barry Mason / Alamy Stock Photo
Give us feedback