Weird French Foods and Delicacies You Should Try 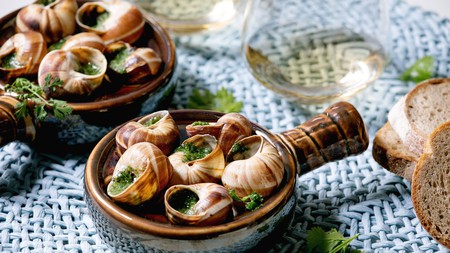 With national nicknames, we so often are what we eat – or at least what our enemies deride us for eating. The French rechristened the English Les Rosbifs and the English hit back with the Frogs. In reality, the French eat far weirder and more wonderful things than just cuisses de grenouilles – these are the delicacies you need to try in France.

Snails are up there with frogs’ legs as one of the most stereotypical French foods; a rubbery treat that many visitors to France feel compelled to try. The best snails in the country come from Burgundy and the preparation is actually far more complex than you might imagine. You certainly can’t pinch one of these critters off the garden wall and chow down. Instead, they are fed cleansing herbs and thoroughly washed prior to boiling, before being cooked with a whole lot of butter, garlic and parsley. In all, the process takes three days, which explains their relatively weighty price tag.

It’s said the French eat every part of the pig aside from the “oink”. Trotters, as the British call them, are popular the world over but they are especially adored in France. They are cooked slowly and the final dish is tender and delightfully gelatinous (if there is such a thing). Be warned, there’s no delicate way of eating them and you’ll most likely have to take those feet in your hands and gnaw the meat straight off the bone.

This is the one French delicacy that everybody loves to hate. Foie gras is made by force-feeding ducks and geese large amounts of grain in the weeks prior to their slaughter, a process known as “gavage”, in order to engorge their livers to roughly 10 times their usual size. Activists see it as a shameful abuse of animal rights. Undeterred, the French enjoy the rich, buttery pâté on toast, especially during the holiday period. 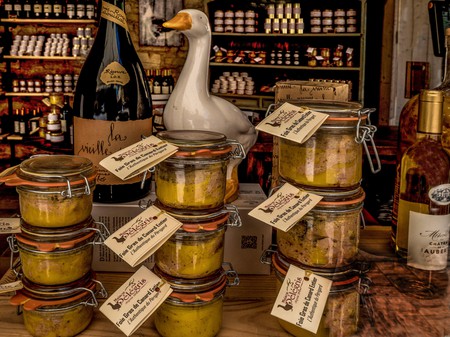 Who in their right mind would eat tongue? The French, that’s who. Like a lot of the foods on this list, chefs have devised techniques over the centuries to disguise the true nature of what they are serving their diners. For langue de boeuf, this usually means slicing the great, hulking mass of taste-budded flesh into fine, unrecognisable strips. If you can get over the psychological hurdle of knowing that what you are tasting is the same thing as what you are tasting with then, apparently, it’s a melt-in-the-mouth kind of meat.

It could be the unfortunate similarity of the words ‘offal’ and ‘awful’ that puts Anglophone diners off tripe, or it might just be the billowing white mess of it all that causes the distaste. The French, on the other hand, have a great appetite for stomach, preferring to cook it on a low heat for a long time and with lots of herbs and white wine. Tripe’s high-protein collagen content also makes it a brilliant health food. Somehow, though, it seems unlikely to catch on as the latest foodie fad anytime soon. 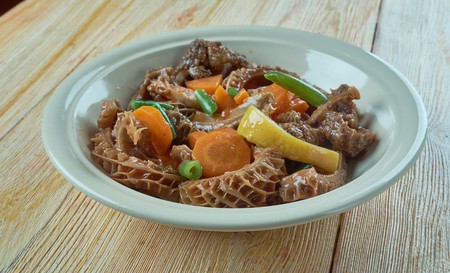 Tripe is a traditional dish from Normandy

Now that you’ve whipped out, carved up, flash fried, and swallowed the cow’s tongue, you might as well finish off the rest of its head. The brain, either of a full-grown cow or a veal calf, is really what most people are after. A popular recipe serves it with a Gribiche sauce, which is made by blending hard-boiled egg yolks with mustard and rapeseed oil. Like tripe, tête de veau is said to have numerous health benefits, such as promoting healthy skin and bones, making it a particularly good dish for sufferers of arthritis.

If ingenious methods of preparation don’t seem like they’re quite going to do the job, French chefs have been known to invent euphemisms for their more unusual dishes. Case in point: sweetbread, otherwise known as calf pancreas. The best way to prepare it is to first sear it in flour and butter and then mix it with plenty of mushrooms. A nice glass of Burgundy red will also help it slide right down.

When someone orders andouillette, everyone in the restaurant knows about it. If they’re at your table, you’ll have the smell of that pig intestine sausage in your nose for days. Visually, it’s not exactly stunning either. But, if the locals are to be believed, once you get past the look and smell of the thing, the taste is actually surprisingly sweet. The best andouillette in France can be found in Lyon, where you’ll most likely find it served with a little dab of onion confit. 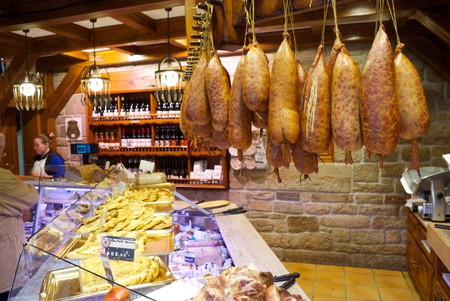 Andouillette sausage on display in a French charcuterie

For those readers whose French doesn’t extend to all aspects of the mammalian anatomy, enjoy these final seconds of ignorance. The couilles de mouton are, alas, the sheep’s testicles. The French region of Périgord (best known for its foie gras) has its own special recipe, called frivolités beneventines. A big bag of, well, balls, are peeled, soaked in cold water for three hours, sliced, and then grilled with lemon, parsley and locally grown white wine. They are sweet, tender and, prepared this way, extremely pricey. They are something’s family jewels, after all.

Just as the French are happy to eat every part of every animal that walks the land, pretty much everything that comes out of the sea is fair game. A marine delicacy that you don’t often see on English menus are urchins. These spiny crustaceans have a reputation for being slimy, but the locals will tell you they really have more of a creamy texture. Much like oysters, they bring the taste of the sea to your mouth. 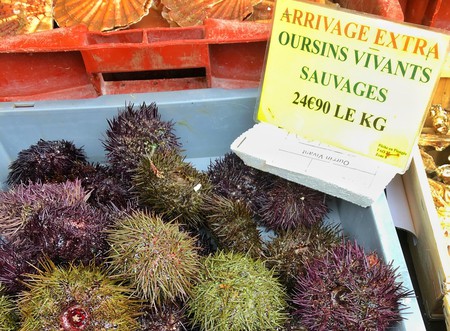 Just so any vegetarians and vegans reading this don’t feel left out, this entry can be made with or without bacon and eggs. Farci Poitevin, a rustic dish from the Poitou-Charentes region, most unfortunately, will still look as if it came out of the rear end of a farmyard animal. This fat-free terrine is a mixture of mixed greens, beets and spices, all wrapped up in a generous layer of gelatin. You can eat it on its own or spread on a baguette.

The thought of eating the grey matter of another animal might make you feel a little queasy, but brains are actually packed with omega-3 fatty acids and nutrients that can help protect the human brain and spinal cord. Lamb, sheep and calf brains are generally considered the best for eating, with a creamy custard-like texture and a mild savoury flavour. In France, you’ll most commonly find them on the menu as sautéd cerveaux – brains lightly dusted with seasoned flour and fried with garlic, parsley and lemon. Ox brains, meanwhile, are firmer and are often used as a pie filling. If you’re cooking them up yourself, make sure to remove the red veins and soak the brains in cold water overnight.

Roast pigeon has been considered a delicacy in France since at least the 16th century – however, the pigeon on your plate is a far cry from the “flying rats” found in cities around the world. The meat from these farmed pigeons, which are known as squab, is renowned as being tender, moist and richer in taste than other poultry, and is very lean. Roast pigeon is a deliciously simple way to sample this tasty meat, or go all out and order pigeon Rossini, roast pigeon served with a sauce of foie gras and truffles.

Lamprey is a kind of ancient jawless fish with a funnel-like mouth ringed with sharp teeth, the kind of creature you’d expect to find in a horror film rather than on a menu. In the Bordeaux region of France, however, it’s considered a delicacy. The fish are caught between December and May and are stewed with cured ham, red wine, herbs and vegetables. Before being served, the fish is briefly flambéed in a sauce of its own blood, Armagnac and wine. Want to try it? Look out for Lamprey à la Bordelaise on the menu, or check out the annual lamprey festival held each April in the town of Sainte-Terre. 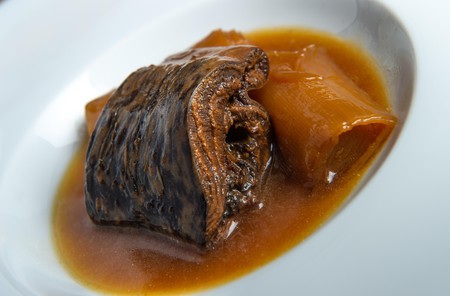 Lamprey in Bordeaux is considered a delicacy

Gizzards, known as gésiers in France, are part of the digestive tract of a chicken, turkey or duck, similar to the stomach. While it might not sound all that appetising to the uninitiated, they’re popular across the world, from Southeast Asia to Mexico, Africa and Europe. In France, you’ll find them on menus in the south west, where gésiers de canard confits (confit duck gizzards) are typically used to top simple salads. If you want to take on the challenge of cooking them, just make sure to cook them for a long time over a low heat to make sure they’re nice and tender.

Chowing down on a steak is one thing, but how would you feel about dining on cow’s udder? This often discarded part of a cow isn’t hollow, as you might imagine, but is actually a solid muscle that resembles pancreas in its taste and texture. In France, you’ll sometimes find it grilled and sold by the slice, and occasionally as a pot-roast. One 18th-century recipe for calf udder croquettes (rissoles de tétines de veau) even calls for strips of udder to be stuffed with veal, wrapped in pastry and deep fried.