Finnish Lapland is the perfect spot for a winter break, for its unparalleled landscapes, exciting winter sports, fascinating local culture, and of course a chance to visit Santa. But there are many more tales and pieces of folklore from the region you might not have heard of. Some of them have shaped the Christmas traditions and stories we know today. These are just some of them.

How the Northern Lights came to be

The Northern Lights have a mystical aura to them and scientists are still uncovering their secrets. Every culture has their own origin story for the aurora borealis, and the Finnish Sami people are no exception. They believed that the lights were caused by a firefox running through the snow so quickly that its fur brushed against the night sky, giving off sparks which caused the aurora. The Finnish word for the Northern lights, revontulet, even translates to ‘firefox’. 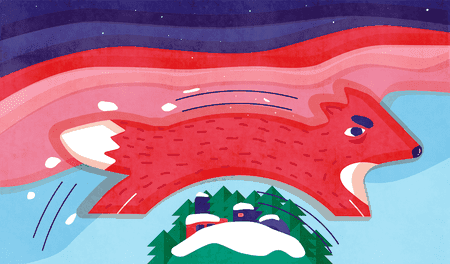 A polar night, or kaamos, is any period in which the night lasts for more than 24 hours. North of the Arctic Circle, it can last for two months at a time, with the sun appearing for as little as two hours each day. It was a highly spiritual time during the Finn-pagan era when the Northern Lights were associated with the spirit world. They even believed that the lights could deliver messages from the dead on polar night.

The souls of the dead

Another Sami belief was that the Northern Lights were made up of the souls of the dead, so they showed great respect whenever the lights appeared. It was considered disrespectful to gaze directly into the lights or speak too loudly around them. Anybody who broke these rules was said to bring bad fortune upon themselves and their families.

The land of the birds

Centuries ago, Finns thought that the world was flat and didn’t know about migration. Therefore, it caused them a great deal of confusion when the birds suddenly disappeared during the autumn and came back during the spring. They believed that they went to lintukoto or The Land of the Birds. Today, lintukoto is a Finnish word which means ‘happy place’ or ‘paradise’. 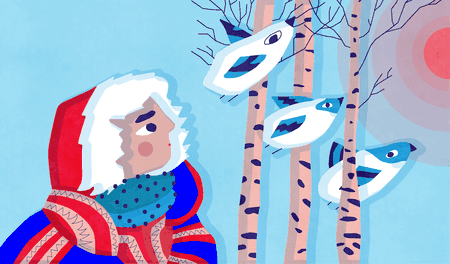 There are many different origins of the Santa Claus mythos. One of them was a figure known as the ‘Yule goat’, which referred to his long white beard which resembled a goat’s beard. It is believed that the Yule Goat was inspired by the Norse god Thor, who drove a chariot driven by two goats. Straw goat ornaments are still used as Christmas decorations throughout Scandinavia, and used to be left at neighbours’ doorways as pranks. The red coat and reindeer sleigh also originate from this figure.

One ‘Yule goat’ myth was that he was a regular man who was turned into a goat on Christmas eve. This myth was included in Swedish author Elsa Beskow’s book Peter and Lotta’s Christmas. It’s likely that this myth was changed to something friendlier as it was considered too frightening for children.

It isn’t only Santa who originates from Lapland mythology, but his elves too. Creatures known as tonttu, which were similar to gnomes or dwarves, they were said to hand out gifts and wear pointed red hats. This evolved into the image of Santa’s elves, although classic tonttu still appear on Christmas cards and illustrations in Scandinavia. Older myths said that tonttu were mischievous spirits who would steal if they were disrespected. The practice of leaving out a bowl of porridge to appease or thank the tonttu also lent itself to the modern-day practise of leaving out cookies and milk for Santa.

Not all of the ancient Christmas mythological figures were good. The nuuttipukki were evil spirits, or sometimes men dressed up in terrifying goat costumes, who went from house to house demanding presents or leftovers, particularly alcohol. This was later changed to the friendlier idea that they gave gifts, rather than demanded them, which became the modern Christmas tradition. 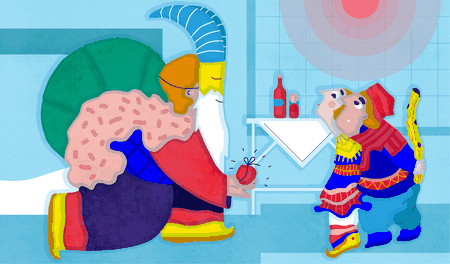 The Old Crone of the North

Reindeer are still an integral commodity in Lapland, and even more so in ancient times when there was less access to food. Finn-pagans would pray to the Old Crone of the North to send plenty of reindeer and other game to hunters so that they would have enough to eat during the winter.

This ancient figure was said to sail over the frozen ocean in a red boat carrying a kettle full of ice which could heal burns. In another version of the tale, the kettle is carried by a tiny man who emerges from the sea.

You can read several old spells and ‘magic songs’ of ancient Lapland collected in The Magic Songs of the Finns by Elias Lönnrot, the same author who compiled The Kalevala. It is a fascinating read for anyone interested in Scandinavian folklore. Among them are spells against sharp frost, for catching reindeer, and one for a good sleighing road, which goes:

Snow for a sleigh to glide along,

Fresh snow along which a sledge can dash;

Hide the berry stalks upon the ground,

The stalks of heather cover up.’