16 Incredible Lighthouses Around The World 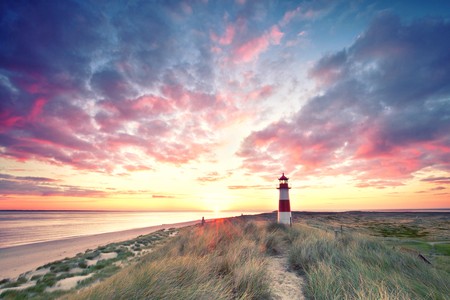 Although seafarers rely a lot less on lighthouses today than they would have when the world’s most-favoured beacons were first built, there is still something undeniably captivating about these sea towers that draw us to visit them. From ancient relics to modern day wonders, here is our round-up of the world’s 16 most awe-inspiring lighthouses.

Also commonly referred to as Leander’s Tower, Maiden’s Tower is located on a small islet at the southern entrance to the Bosphorus Strait. Steeped in an invigorating history, Maiden’s Tower first opened in 1110, when it was used primarily as a watchtower. For a time, a defense wall linked the tower to the Asiatic shore, the remnants of which can be viewed underwater still today. It wasn’t until the tower was destroyed by an earthquake in 1509 and then later burned in 1721 that it began being used as a lighthouse. Since then, it has also functioned as a quarantine station, appeared in a James Bond movie, and now acts as a popular tourist attraction. Several small boats leave Istanbul for the tower daily. Once there, visitors can enjoy a drink or a snack in the tower’s cafe and restaurant before ascending to its cupola summit. 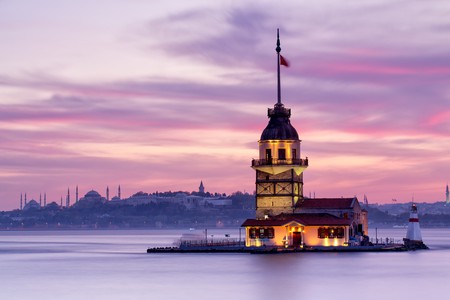 The subject of many photographs, Lindau Lighthouse is recognised as a tourist treasure due to its hypnotic beauty and picturesque surroundings of Lake Constance. Built in 1853, Lindau is the successor of the thirteenth century Magturm Tower and is the southernmost lighthouse in Germany. Originally operated by an open oil fire, the lighthouse is now automated and can be lit on demand by ships using radio signals. At just 33m tall, Lindau may not be the tallest of lighthouses, but it is still one of the world’s favourites due to its pretty architecture and the distinctive clock on its facade. 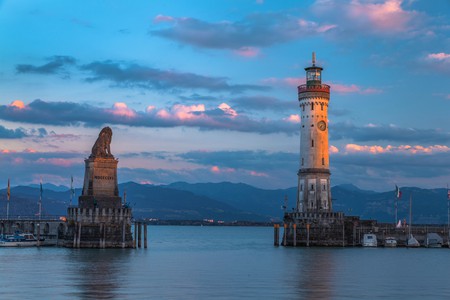 An engineering feat, Phare du Creach is one of the most powerful lighthouses in the world. Situated in the pretty French coastal town of Ushant, the black and white striped construction has been in operation since 1863. Every ten seconds, the lighthouse sends out two flashes which can be seen up to thirty miles away. Unfortunately Phare du Creach is not open to inquisitive visitors, but it is still well worth taking the trip to witness the strength of the light propelling out to sea. A trip to Phare du Creach can also be easily combined with a visit to La Jument lighthouse and Nividic lighthouse. 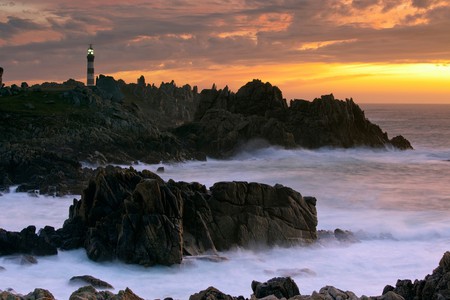 One of the oldest lighthouses in the world, Kõpu Lighthouse on the Estonian island of Hiiumaa has been an active navigation aid since 1531. At 36 metres in height, the proud prism-shaped structure stands atop a 68 metre hill, ensuring that it has the highest coastal light anywhere on the Baltic Sea. Despite the construction of a new, radar lighthouse in 1997, Kõpu continues to be used as a navigation tool by local, recreational, and small fishing boats passing along the stretch of coastline which was once part of the busiest shipping lane in the Baltic Sea. Today the lighthouse is open for tourists and has become the iconic symbol of Hiiumaa, having even been commemorated on a postage stamp at the turn of the millennium. Those planning to visit this historic construction will be pleased to know that the original outer wooden staircase was replaced by an internal staircase in the 1800s which can be used to climb up to the top. 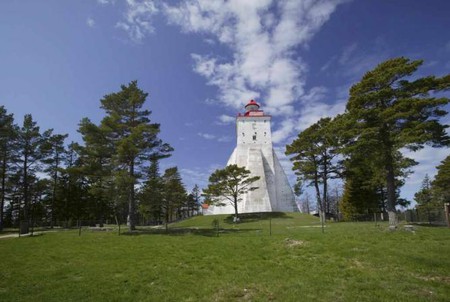 An atypical yet beautiful design, the Baishamen lighthouse on Haidian Island is the sixth tallest in the world and the second tallest in China. What makes it so appealing to tourists, however, is its unique structure. A 3-story hexagonal base blends into a triangular cylindrical tower, reaching 72 metres in height. The entire construction is made from white concrete. Still a fully-functioning landfall light, Baishamen emits a single white flash every six seconds.

Until very recently Gay Head Lighthouse was on America’s Most Endangered Historic Places list. Set just 14 metres from the edge of an eroding cliff, there was a great fear about the future survival of this much-loved landmark. Geology experts remarked that the only way the Gay Head Lighthouse would live on would be if it were moved. The project was estimated to cost $3.4 million, and a Save the Gay Head Lighthouse Committee was set up. In June 2015, the historic lighthouse was successfully moved to its new, safe home. On 11th August 2015, the beacon was lit again – symbolising the end of the longest non-functioning period the lighthouse has experienced in its 160 years. 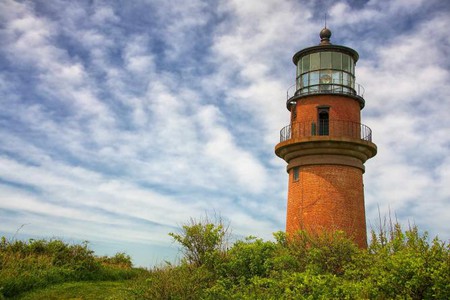 One of only a handful of screw-pile lighthouses left in United States bays, there is something incredibly romantic about Mobile, Alabama’s Middle Bay Light. This hexagonal, cottage-esque creation has had its fair share of both joys and traumas since its completion in 1885. It is said to have been the birthplace of one of the first keeper’s children, have housed a dairy cow for a short while, and even survived a potentially disastrous hurricane in 1916. Although Middle Bay Light eventually became operated by electricity, when it first opened, a group of keepers had to take turns working shifts to ensure the whale oil-burning lamp never went out. The lighthouse was deactivated in 1967 and is now a protected piece of history. To ensure it’s beauty lives on, restoration works have been carried out on it over the past two decades. 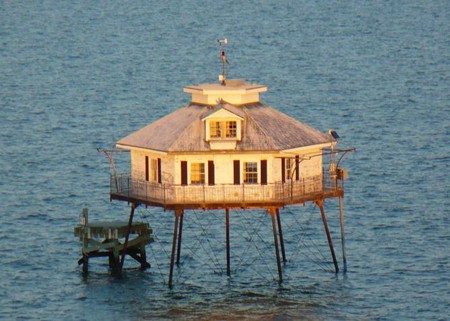 The second tallest lighthouse in Italy, outdone only by the famous Lantern of Genoa, Punta Penna Lighthouse is one of the idyllic region of Abruzzo’s favourite visitor attractions. Constructed in 1906, the lighthouse is still fully operational today, despite having had to undergo several bouts of reconstruction throughout its lifetime, especially in the years following the two world wars. Located in the port of Vasto, tourists are welcome to visit the lighthouse and climb the 307-step spiral staircase to Punta Penna’s summit. Once at the top, visitors are not only able to marvel at the lighthouse’s workings, but are also treated to an incredible view across Abruzzo. What makes Punta Penna differ from other lighthouses is the two-story house at the bottom of the tower. This is where the original lighthouse keeper and his family would have lived. Today, it is home to administrative offices – not quite as romantic, maybe, but the unusual design still makes for captivating photos. 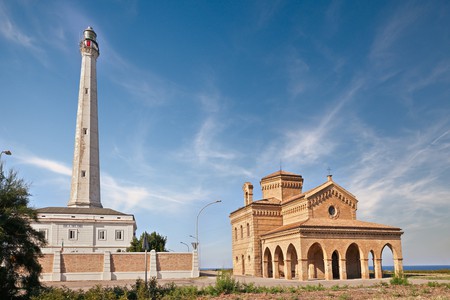 Often described as one of the seven wonders of the industrial world, the Bell Rock Lighthouse is the world’s oldest surviving sea-washed lighthouse. Built over a three-year period between 1807-1810 by English civil engineer Robert Stevenson, the lighthouse was so well designed and constructed that in over 200 years the masonry work has never needed reconstruction work. Situated eleven miles out at sea, the Bell Rock lighthouse operated in tandem with the Bell Rock Signal Tower that was built on land. The signal tower is now a museum detailing the workings and history of this infamous lighthouse. 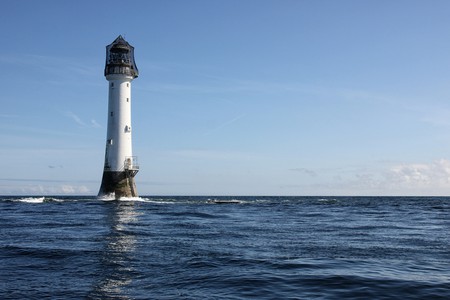 The fourth lighthouse to be designed by Finnish architect Axel Hampus Dalström, Marjaniemi Lighthouse was first lit in 1871. Situated in the westernmost point of Hailuoto island, the lighthouse is the focal point of the town of Marjaniemi. The lighthouse still works as a navigation aid today, but it is also open to visitors throughout July and August each year. During this period, groups are guided up the 110 steps to the summit of the lighthouse, where they learn all about the history and workings of the lighthouse. The old pilot house next to the lighthouse is now a popular hotel, affording guests fantastic views of both the lighthouse and its stunning surroundings. 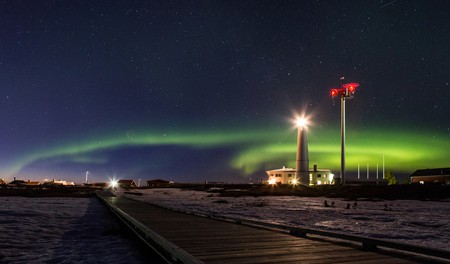 One of Ireland’s proudest attractions, Hook Head Lighthouse is the oldest intact, fully operational lighthouse in the world. Flashing warnings out to passing ships for the last 800 years, Hook Head is absolutely steeped in history. Informative guided tours are held daily throughout the year, and are the perfect way for inquisitive visitors to learn more about this fascinating feat. The lighthouse is also home to a number of one-off art workshops and a series of art and maritime exhibits. Lucky wintertime visitors may even catch sight of humpback and fin whales feeding in the surrounding waters. 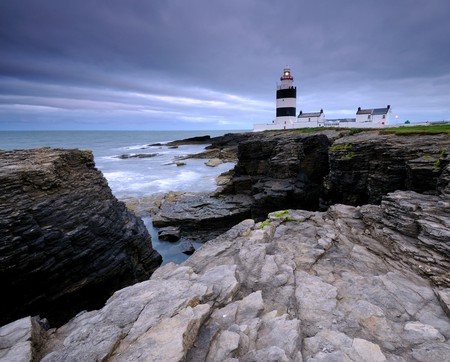 The most popular stop-off point along Nova Scotia’s scenic Lighthouse Trail, Peggys Point lighthouse is one of the most iconic symbols of Canada. Nestled into the rocky formation surrounding Peggys Cove, the white and red structure is instantly recognisable. Once a fully operating post office, Peggys Point is now a hugely popular tourist spot and the surrounding rocks make for a great picnic spot. After visiting the lighthouse, enjoy a slow amble through the quaint, artsy, fishing village of Peggys Cove. 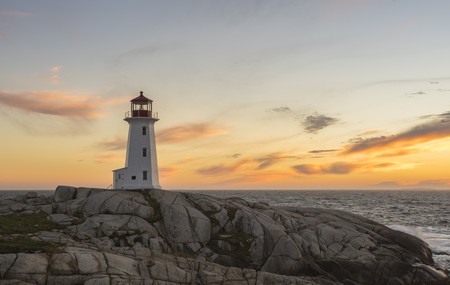 A truly distinctive lighthouse, Low Lighthouse is one of three lighthouses on Burnham-on-Sea in Somerset, but it is the only one still functioning today. It stands on nine wooden legs (some of which have been reinforced with metal in recent years) and reaches just 11 metres in height. Due to its unusual design and structure, the Low Lighthouse is now a Grade II listed building, having survived in such splendour since 1832. The red and white wooden house on stilts makes for a great beach photography subject, especially at dusk. 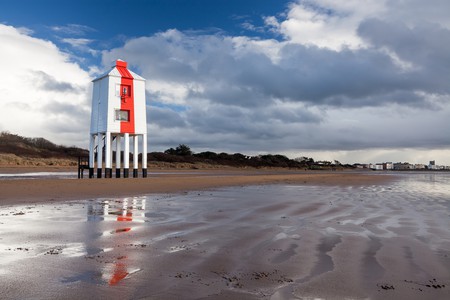 Having stolen the title from Perry’s Victory and International Peace Memorial (Ohio) in 1990, Jeddah Light is officially the tallest lighthouse in the world. Located at the entrance to the Jeddah seaport, the lighthouse doubles as the port’s control tower. Its primary function, however, remains as an aid of warning to approaching ships as far as 40 kilometres away of the potentially dangerous coral reefs that line the shore. The cylindrical lighthouse is particularly mesmerising at sunset. 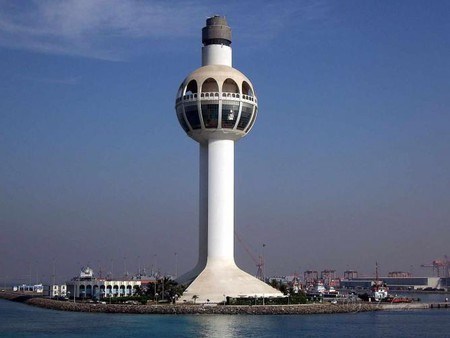 One of the first cast-iron lighthouses in the world, Gibbs Hill lighthouse was built by the Royal Engineers in 1844. It is now one of two lighthouses in Bermuda, but by far the most popular to visit. Offering those able to climb the 185 steps to the lighthouse’s summit arguably the best bird’s eye view of Bermuda, it’s certainly not to be missed. The lighthouse is also home to a fantastic casual dining restaurant that is open for dinner daily, lunch on weekends, and breakfast on Sundays. Reservations for the restaurant are recommended, but are not needed to visit the lighthouse itself. 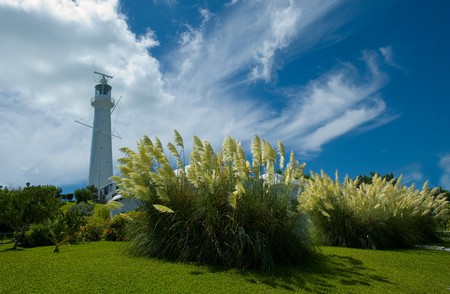 One of the world’s most modern lighthouses, the Enoshima Lighthouse (often referred to as Japan’s ‘Sea Candle’) opened in 2009. Using a high-power LED projector, the lighthouse is lit up a different colour depending on the time of year. In Spring, Enoshima is a pale pink, in Summer a bright blue, in Autumn a yellowy orange, and in Winter, purple. Visitors are able to ascend the 100 metres to the lighthouse’s summit throughout the entire year. Autumn and Winter are arguably the best months to visit, however, as this is when Mount Fuji is most likely to be visible in the distance. 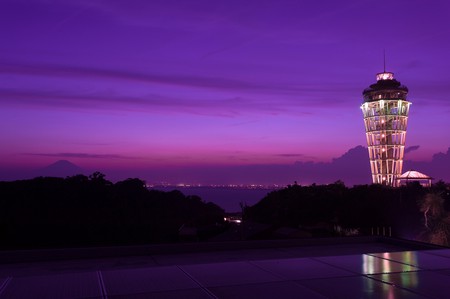