Toga Vin and Ølstue: the Bar That's the Real Home of Danish Politics 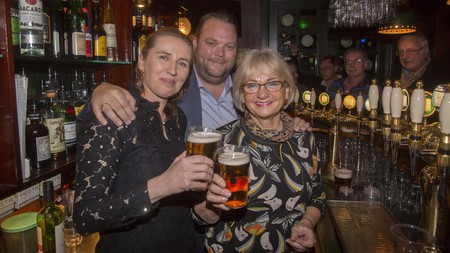 High-profile politicians have pulled pints at Toga Vin and Ølstue, an otherwise nondescript Copenhagen watering hole. Culture Trip spoke to the bar’s owner about its transformation into the city’s foremost political pub.

“I bring two very important things to work with me every day: my bottle opener and my discretion,” says Peter Frederiksen, the friendly owner of Copenhagen pub Toga Vin and Ølstue. He displays a deep sense of loyalty and pride in Toga, and it is in part this discrete attitude that has made a visit to the bar a rite of passage for politicians, trade union representatives and civil servants in Denmark. The Danish prime minister, Mette Frederiksen, has visited the bar on many occasions, as have Lars Løkke Rasmussen (her predecessor) and many others in the Danish political sphere. Many of them have even been invited to pull pints behind the bar. Culture Trip spoke to Toga Vin and Ølstue’s owner about the bar’s ability to draw such a roster of government names to drink behind its doors.

At Toga Vin and Ølstue, an unspoken trust applies: everything discussed amongst patrons is understood to be strictly confidential. “It has been like this for as long as I can remember,” explains Frederiksen, “in that there has been an unspoken contract between the guests and my team working here.” This rule, obeyed by all, allows for conversation and debate to flow as quickly as the beer and wine.

According to Frederiksen, the origins of the pub’s name (which means ‘Toga Wine and Beer House’) remain unclear, but he suggests that Toga could be a nod to the Ancient Romans’ dedication to political discussion. Despite this title, the original tavern, thought to date back to 1920, was not known for its political dialogue. As Frederiksen explains, “Toga has not always been a political bar: the area where we are located was originally the ‘naughty’ part of Copenhagen – it was mostly prostitution, robbers and sailors that hung around this area.”

But thanks to the hippy movement of the ’60s, the neighbourhood soon transformed, becoming known for its activism. The Storkespringvandet fountain, near Toga Vin and Ølstue, was a central meeting point for protesters. “The hippies would gather around the fountain and play music. Back then, as today, it was really hard living by only playing folk music, so the hippies would come and play in bars. One of the places they played a lot at was Toga.”

Then, in the wake of its hippy phase, the area – and by extension the bar – became quieter, which Frederiksen blames in part on the rise of coffee shops in Copenhagen. “After the ’60s and ’70s we had the dark ages for Toga in the ’80s. Everything was turned into cafés, and glass and steel ruled. It felt like there was no place for a bar like Toga.” Pubs became uncool in Denmark, and with its cosy, typical pub interior, Toga Vin and Ølstue lost many of its customers to the new global trend for coffee culture. “It was only in the ’80s that cafés started to really pop up around Copenhagen. People started to gravitate towards these cafés as opposed to the likes of Toga; it was really hard for us back then.”

Wandering the central streets of Copenhagen, you would be forgiven for missing Toga Vin and Ølstue which, with its deep pine-green facade, looks like many other traditional Danish pubs. Step inside and it’s little different: the decor is as traditional as it gets, in an old Copenhagen style, with low ceilings, vintage wood features and framed paintings hanging on the walls. But mention the name of the bar and you’ll find that it’s become familiar to many citizens of Copenhagen, and is well known for drawing in politicians to take part in off-the-record discussions.

Frederiksen is able to pinpoint the exact date that the bar’s transformation into a political hub began, following a period of relative obscurity. “On 4 December 1992 a man called Johannes, who was a mentor for many young politicians, moved from working at the bar downstairs to Toga itself. Because of him, a lot of young political figures from political organisations such as the Social Democratic party, the Liberals and the Conservatives, came to Toga, and since then we have been a political bar.”

Alongside his bar job, Johannes worked in an administration role for a government minister for some years, and was involved in various major political parties in Denmark at different points in his life. Johannes invited his government friends to the pub, and it soon became a popular meeting place for those involved in Denmark’s politics. Indeed, many of the young politicians who visited in these early days are now ministers in the Danish parliament.

The politicians were often invited to pull a pint or pour a drink behind the bar. “We were the first to have guest politician bartenders – it was a funny way to meet your politicians, as normally you meet your politicians during a campaign or election, or at a meeting. It is very formal normally… Here, you can have another kind of conversation with them.”

Frederiksen suggests that there’s such a relaxed atmosphere at Toga that casual conversations start easily between customers from the political sphere and members of the public. “Many times, if you are discussing politics with your friend, you would say ‘If the prime minister were here I would tell her this and this,’ but when you are actually sitting with a member of parliament, or the prime minister, it turns out you would have the same conversation as with your friends, in a cosy and nice manner.”

Frederiksen notes that there is no political agenda to the institution. “It is important that we highlight we are neither red or blue, left or right wing.” Instead, the idea is to enable conversation. “Toga has been like an education for many young politicians: we demand that people with different viewpoints come together.” In order to ensure this mix of standpoints, Frederiksen tries to hire the same number of right-leaning as left-leaning members of staff. “It is always good to have an opinion when you come to Toga,” says Frederiksen. “It should always be remembered that it is a positive thing to have an opinion about political matters.”

The chance to experience political discussion with those at the top of their game has made Toga Vin and Ølstue a popular boozer. As Frederiksen jokes, “It must be the bar with the most educated bar staff you will find in the world. Right now we have two lawyers and two historians, and that’s not because it is hard to get a job as a lawyer; it is because they want to be here.”

The bar’s well-respected status is clear from a cabinet behind the bar, which displays rows of political busts, carved out in clay, that were created for Toga Vin and Ølstue by the now-defunct BG Bank. A bartender explains, “The top shelf holds the busts of Danish leaders, while the bottom is dedicated to international figures: Gandhi, John F Kennedy, Churchill. They were originally designed as money boxes to smash in an emergency.”

Toga Vin and Ølstue is an intimate space, with stools packed tightly around the bar, meaning elbows can’t help but touch. The bar itself fits no more than two people comfortably, encouraging conversation between customers and those pulling pints. Its diminutive size also means that the bar has been able to get an indoor smoking licence – and at under 40 square metres, it’s usually awash in a fug of smoke, perhaps adding to its ability to incite confidential conversation.

Be that as it may, it’s the sensitive attitude toward what’s said within the bar that remains an absolutely vital ingredient of Toga Vin and Ølstue’s continued standing in Copenhagen. As Frederiksen asserts, “What happens at Toga, stays at Toga.”