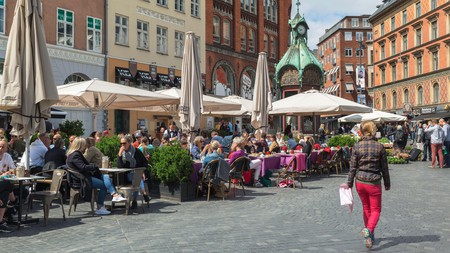 It’s all about top-quality coffee, fresh-baked pastries and chilled-out, unique places to escape the city’s notoriously chilly weather in Copenhagen’s cafés. From cardamom buns baked by Noma alumni to conceptual gallery-worthy design, here are some of the city’s best coffee spots.

Danes love coffee: they drink an average of four cups per day. So, it’s no wonder standards are high in Copenhagen’s coffee bars. But that’s not the only thing: the city is in the midst of a bread and pastries craze, with cafés everywhere competing over who serves the best buns.

“There are three things people really go for: good coffee, good pastries and bread, and the other thing is something new,” says Copenhagen chef and baker Jesper Gøtz. “I think in some ways people in Copenhagen really like the vibe where it’s not too commercialised,” he says, adding that “people want something unique.” 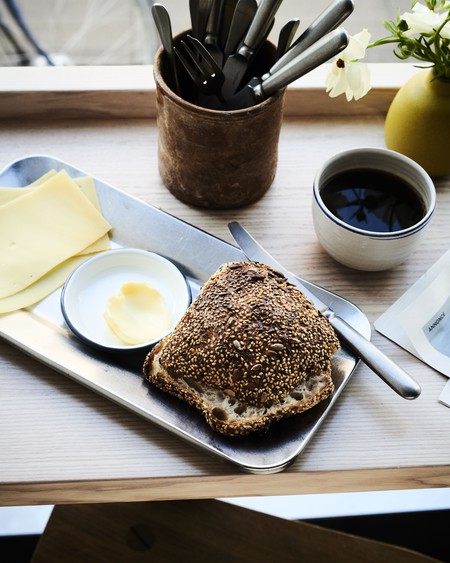 The result: Copenhagen is filled with inviting, laid-back, coffee-focused cafés with a range of foodie offerings. But which to choose? Culture Trip asked Gøtz, who co-founded Lille Bakery and now runs bread workshops just north of the city, as well as food critic Rasmus Palsgård, who founded food and wine blog Feinschmeckeren, for their favourite cafés around the city.

Ex-industrial, harbour-side Refshaleøen has been an up-and-coming neighbourhood for a while. It’s well worth the 15-minute cycle from town for the island’s street food, open-air bars and cafés. They include the laid-back, welcoming Lille Bakery, which opened thanks to a successful crowdfunding campaign. “It’s a very rustic, industrial-looking place. They’re quite famous for their sausage rolls in puff pastry, and super juicy, freshly made sausages.” says Palsgård. The menu changes daily, but there’s usually a quiche and salad available, alongside an array of pastries and breads baked on site. “It’s very simple, but the products are good, the level of craftsmanship is definitely up there.”

Ø12 is a great stopping-off point by Copenhagen’s green museum district, Parkmuseerne, and continues the area’s verdant theme with plants lining its upper walls. As well as a menu of sourdough-oriented breakfasts, plus eggs, kale salad, burrata and beef tartare, Gøtz recommends the croque monsieurs, which are made with Danish cheese. And, of course, they know how to supply a caffeine hit here, too. “What I like most is their coffee,” Gøtz says. “They have the best caffe latte in the city: they use really fatty milk and some really dark coffee from Ozone coffee roastery.” 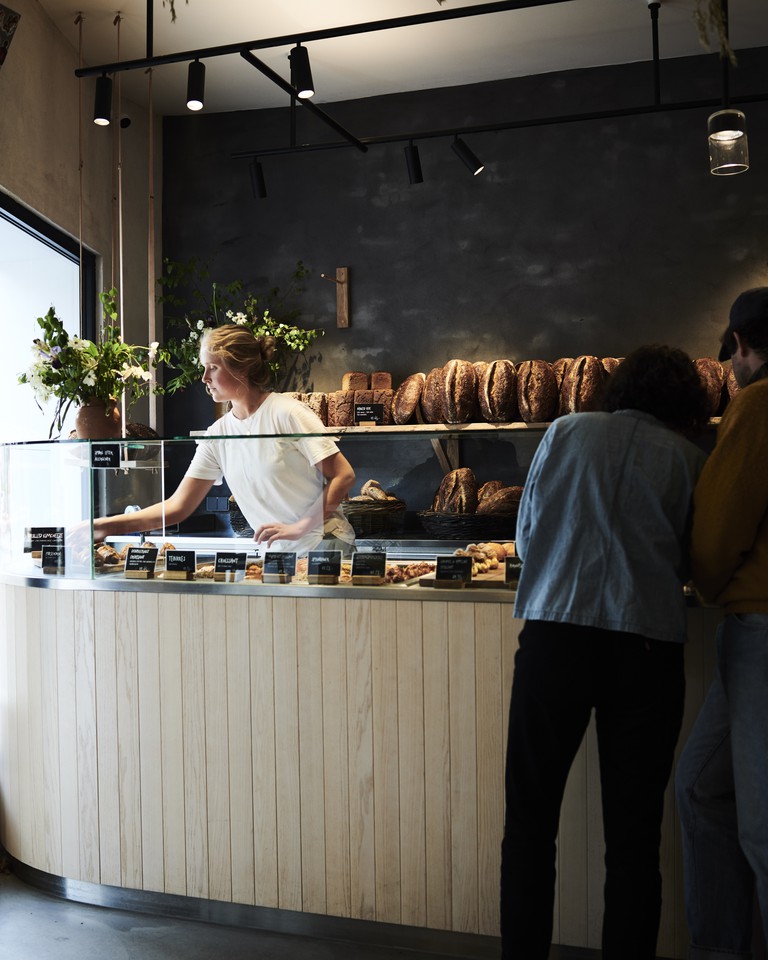 Richard Hart made his name as head baker at San Francisco’s Tartine, which is famed for its sourdough, before opening Hart Bageri in Frederiksberg, with backing from Noma’s René Redzepi. Hart supplies Noma with its sourdough, while also baking numerous sweet pastries (and an unbeatable cheesecake) from the bakery’s open kitchen. “They’re very inventive,” says Palsgård. “They make fantastic pastries with cardamom and vanilla syrup, with this buttery caramelised sticky texture on the bottom, and sausage rolls where they play with all sorts of different spices. They work with a coffee bar called Prolog, so the coffee is definitely on a very high level.” The staff are “super-friendly,” adds Hart, “so it’s a pleasure to go there.”

“If I were to get pastries, I’d always go to Juno Bakery. I’m not a big cake or pastry guy, but theirs are so good,” says Gøtz. Self-taught Swedish-born baker Emil Glaser worked at Noma as well as Michelin-star restaurants in France and Japan before opening up Juno Bakery in Østerbro. The bakery is famous for its cardamom buns, but Gøtz’s favourite Juno pastry is the semla: a bun made from soft cardamom-scented dough, with marzipan, whipped cream and roasted Valencia almonds. Gøtz especially likes Juno for the fact that they give customers a glimpse behind the scenes. “It’s an open bakery where you can see things coming in and out of the oven,” he says. “They really don’t stick to traditions,” adds Palsgård. “They change tiny details, which make a huge difference in the final product.” For example, Danish salted butter gives the croissant dough a salty kick, says Palsgård, while top-quality ingredients, yeast-free fermentation and local organic grains are key to their creations.

Kafeteria at Statens Museum for Kunst (SMK) – Denmark’s biggest art museum, in the city’s green museum district – was designed by conceptual artist Danh Vo to be a place where food and art meet. The stylish, high-ceilinged space contains a mix of Danish and Italian furniture, and Japanese lantern-inspired lamps. “It’s a beautiful place,” says Gøtz, and is a great spot for a coffee in Copenhagen. The organic menu changes daily, but includes plenty of soups and seasonal smørrebrød (open-sandwich) toppings, plus house-baked goods from sourdough to cakes. 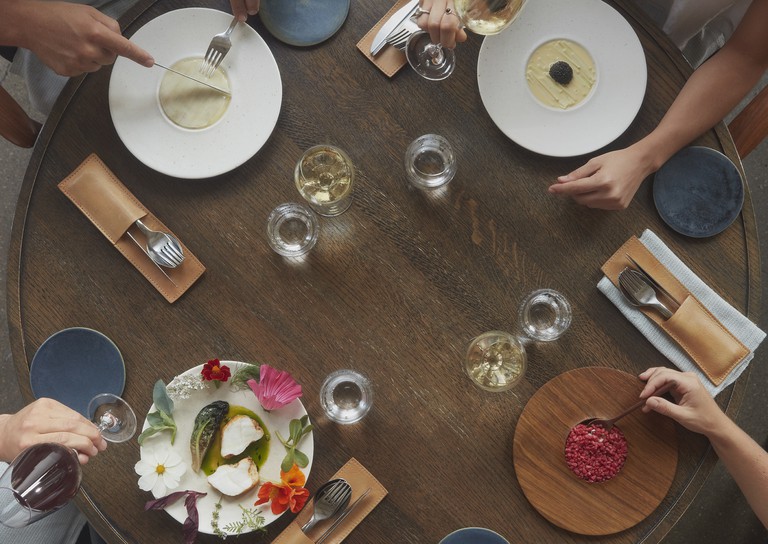 Courtesy of The Corner at 108

This canal-side café, an offshoot – literally at the corner – of the Michelin-star 108 Restaurant, serves more informal dishes than its parent restaurant, such as chicken burgers and salads, while also offering an affordable, accessible taste of Noma-style fermentation in pastry form. “Because it’s a part of the Noma family, they focus a lot on fermentation, using all sorts of different fermented sauces to add more complexity. They have these pastries glazed with fermented mushroom juice, or coffee kombucha or fermented blueberries,” says Palsgård. “The final product is outstanding: it’s puff pastry dough, which is rich in butter and caramelises at the bottom.” And care is given to the coffee too, as Palsgård explains: “Coffee-wise they use Tim Wendelboe form Oslo, who has also designed the coffee concept at Noma. It has really high-quality products, with simple presentation.”

After Juno the Bakery became a runaway success – with the queues to match – the team behind the original location opened up this second Østerbro bakery around the corner from the original. It serves all the same signature cardamom buns and pastries, alongside some more sit-down breakfast dishes – plus it has more seating. “It’s more of a real café [than the bakery]. They serve really good coffee, they have a brioche with bacon and fried eggs, sandwiches and some different breakfast options, so that’s definitely worth visiting.”

With its stripped-back design, big windows and arty magazine collection, this next-level coffee bar and roastery exudes Meatpacking District cool. Prolog serves pastries, but the coffee is the main focus – and it’s Palsgård’s top choice for a cappuccino in the city. “I haven’t been able to find better cappuccinos than they make,” he says. “It’s just this perfect emulsion of foamy milk and a quite intense coffee flavour.” Its passionate co-founder Jonas Gehl has won the Danish Barista Championship two years running. “Jonas is really just a geek when it comes to coffee, and he can talk forever about it if you want him to, but he’s not preaching.” 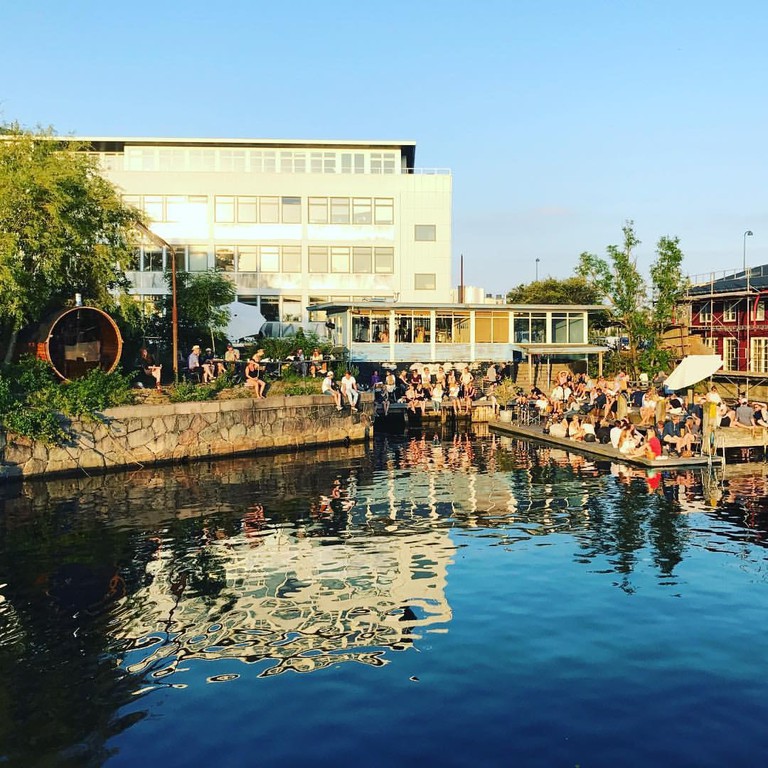 “La Banchina is one of my favourite places. It’s chilled, you feel welcome, the food is good and it’s not so expensive,” says Gøtz. The 16-seat Refshaleøen restaurant/café (complete with a sauna) is open year-round, serving breakfasts, coffee and pastries from 8am. “They have good coffee and they make their own pastries.” Gøtz adds. Later in the day, there’s booze and organic farm-to-table meals. “They have a rule where they only serve fish and vegetables [in the evening] – they have a fish dish and a vegetable dish,” adds Gøtz. “In summertime, they’re packed with people sitting outside and drinking wine and swimming in the harbour.”

This article is an updated version of a story originally created by Rainer Mesi.