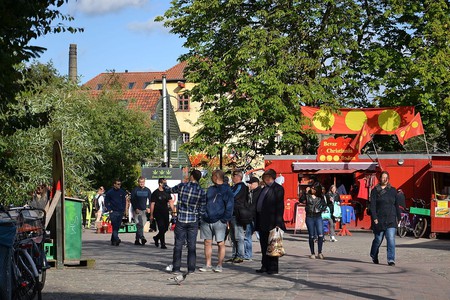 Freetown Christiania looks nothing like the other neighbourhoods around Copenhagen – meaning you should definitely visit to see a different side of the neat capital of Denmark. As it has been an autonomous district since the 70s – when a group of hippies squatted the former military base area – Christiania has its own written and unwritten rules.

The Green Light District or as it’s called by locals ‘Pusher Street’ is the most famous part of Freetown Christiania and is where you’ll see numerous booths loaded with all different kinds of weed set, no matter what time of day you pass by. Noticing the street’s underground atmosphere, visitors who have just left Copenhagen’s neat streets behind, usually feel the urge to take a couple of snaps without paying attention to the sign that has been standing at Christiania’s entrance for several years reading: ‘Taking photos is forbidden because buying and selling hash is still illegal.’ Keep your camera in your bag while you go past. 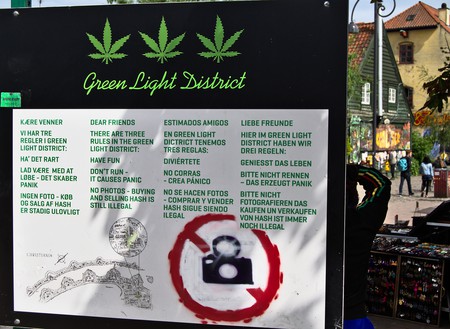 While it’s allowed to take photos in Christiania, taking photos with other people in the scene should only be done with permission. Though Freetown Christiania is a touristic site for you, for the 800 or so people living there it is their neighborhood and they don’t appreciate it when foreigners photograph them at their house’s front yards or while relaxing at their favourite café. So, try to be discreet and respect the locals. 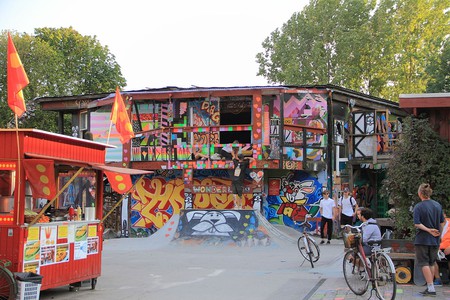 Don’t run! Because as the sign at the entrance of the autonomous district says ‘running causes panic’. Freetown Christiania is a peaceful area and you have nothing to worry about while you’re taking a stroll but due to the cannabis trade, police raids take place quite often. So, the Christiania’s residents rightly so came up with the ‘Don’t Run’ rule especially for the area around the cafés, bars and restaurants where most people gather. So, even if you’re late for your appointment or are just keen to discover the area, keep your pace slow and steady. 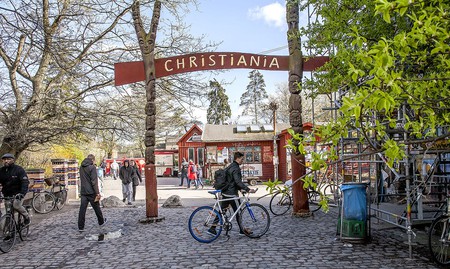 As paradoxical as this sounds you better not buy hash in Freetown Christiania (if you’re planning to buy any, to begin with). And it’s not us telling this, but the area’s residents. After two police officers were shot in Christiania in August 2016, local residents tried to stop the cannabis trade and for some months Pusher Street was empty. During that time, posters with the motto ‘Help Christiania and buy your hash somewhere else’ were hanging all over the neighbourhood, as residents tried to spread the word in an attempt to ban the cannabis trade to avoid similar incidents in the future. It didn’t take long before the stalls were once again set along Green Light District but many locals are still not supporting the cannabis trade that takes place in their neighbourhood. 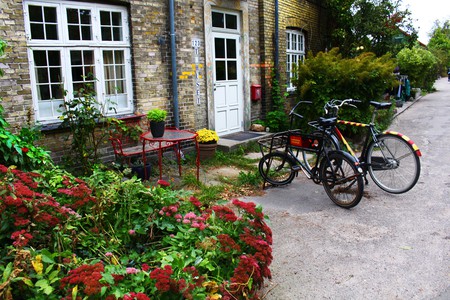 While you’re visiting Christiania you have to keep in mind that buying and smoking weed is illegal in Denmark and that applies to Christiania too. The hippie neighbourhood may be known for its open cannabis trade but that doesn’t mean that it’s legal. It’s said that when police officers roam around Christiania the word spreads quickly. 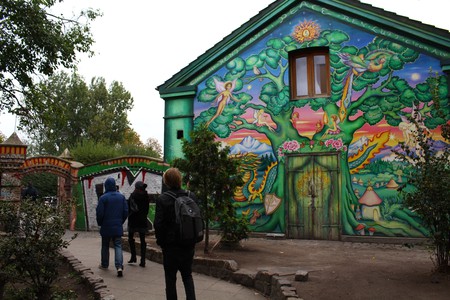 A mural at the entrance of Freetown Christiania | © Aliki Seferou

Don’t miss the chance to explore the area across Dyssebroen

Christiania’s graffiti-painted walls, cobblestone alleys with the smoky bars and cosy cafés are the things that create the peculiar underground atmosphere that attracts locals and tourists. But the area that appears once you cross ‘Dyssebroen’ – the bridge that connects Christiania’s main area (Christianshavn Side) to Amager side – is equally beautiful. Take a walk among the trees and see locals’ colourful houses by the waterfront or relax on one of the wooden platforms and enjoy the peaceful atmosphere. In this are of Christiania, you’re free to take photos and even run if you feel like it! 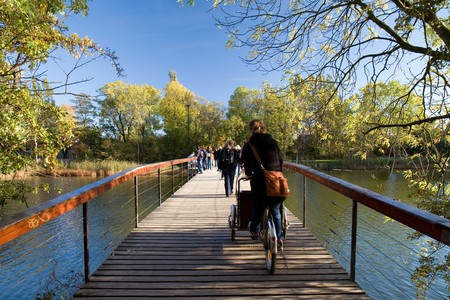 Don’t talk (only) about the cannabis trade with locals

The best way to learn about Christiania is to strike up a conversation with a local. The long wooden tables in the cafés and the relaxed atmosphere in the bars and at outdoor hangouts, creates the ideal conditions for mingling with locals who are always happy to talk about their neighbourhood. Just don’t ask them about the cannabis trade. At least not from the very first few seconds. The cannabis trade has for many years been the main topic of discussion in the media and among tourists so, the area’s residents have answered the questions you have a million times before. Moreover, Freetown Christiania is to them much more than just Pusher Street and they don’t really appreciate it when people seem to only care about the open cannabis trade. 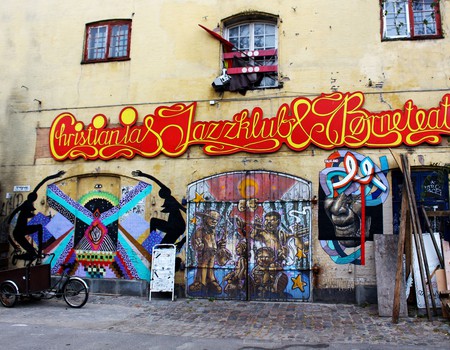