Wim Delvoye: Tattooing Pigs For The Art Of Provocation 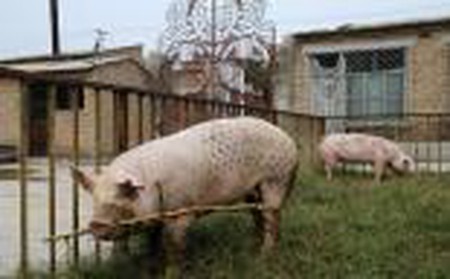 Wim Delvoye is not merely an artist – he’s a provocateur. An enfant terrible of the contemporary art world, Delvoye’s work is often designed to shock, appall, and provoke. The Belgian artist regularly pushes the boundaries of his craft, forcing audiences to question his ethics – not to mention how we should be defining ‘art.’ In 1997, Delvoye began tattooing live pigs in Europe – a practice which was, unsurprisingly, met with widespread criticism from animal rights activists. We take a closer look at Delvoye’s ‘works of art.’ 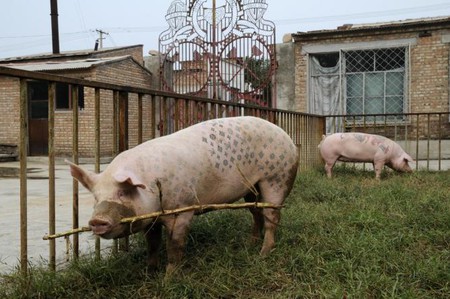 Wim Delvoye was born in Wervik, Belgium in 1965. He’s since become well-known in the art community for his provocative works employing a range of rather unconventional materials, to include fecal matter. In the 1990s, Delvoye began to experiment with tattoo art; more specifically, tattooing the skin of dead pigs. But by 1997, the artist moved on to a new material: live animals.

Using the skin of live pigs as his canvas, Delvoye shocked European audiences and angered animal rights groups across the continent. In 2004 he bought a farm in a small village outside of Beijing, where animal rights laws are practically non-existent. He systematically elaborated a new concept that he called his ‘Art Farm.’ Here, specialists look after his pigs, while the artist sedates them, shaves their skin, and tattoos them. Veterinarians treat their skin after the process to ensure that their wounds are clean and their skin is properly moisturized.

In an interview with French newspaper Le Monde, Delvoye explained, “I show the world works of art that are so alive, they have to be vaccinated…It lives, it moves, it will die. Everything is real.” The tattoos themselves are based on Delavoye’s drawings, mostly references Western iconography such as the Louis Vuitton monogram and characters from Disney films. By placing these iconic images on pigskin, the artist takes away their commercial value. They become pure decoration – their only purpose is to shock. 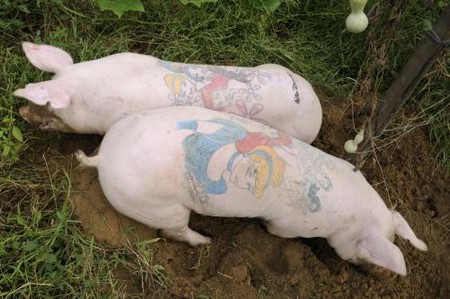 Naturally, Delvoye’s practice is astonishing to animal lovers around the world. Animal rights groups argue that pigs are living, breathing animals who can feel pain. Forcibly undergoing the process of an elaborate tattoo therefore causes them unnecessary discomfort and fear. Delvoye doesn’t slaughter his pigs for their skin, but he repurposes their lives as living canvases. They are objects of a different form of consumption in life and death. Some argue that this is, in reality, no different than harvesting pigs for food. Nevertheless, Delvoye has been banned from art fairs in the past. 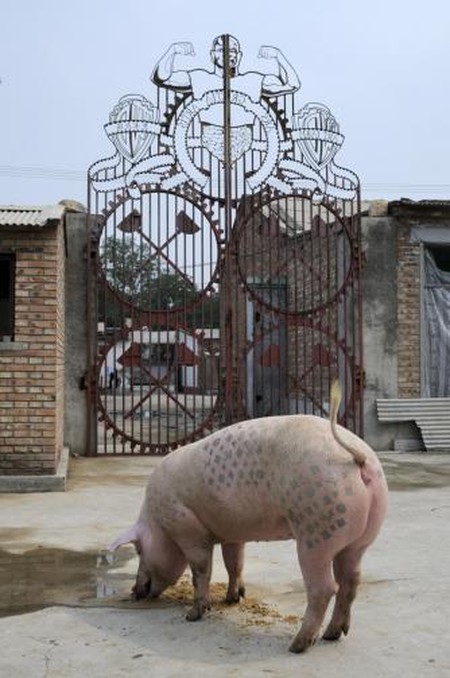 In several different cultures, pigs are associated with filth, gluttony, and greed. But Delvoye compares them to humans, noting their perceived nudity and the texture and color of their skin. Thus it was no surprise when the artist tattooed the back of a young man, Tim Steiner, in 2006. The back tattoo was hardly a shock; rather, it was the process of how it was sold that appalled the art community. Steiner signed a contract with German art collector and gallerist Rik Reinking agreeing to exhibit his tattoo three times a year. Upon his death, his skin would be ‘harvested’ and sent to Reinking, who would then acquire the right to sell the ‘work’ to another collector.

Delvoye’s controversial practices will remain unsettled for some time, as they call into question the complexities of ethics in art. In the meantime, Delvoye continues to disturb art consumers on a global scale.