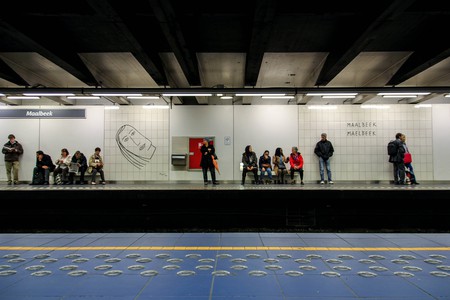 The Maelbeek metro station with artwork by Benoît | © Ståle Grut/Flickr

Belgian cartoonist Benoît van Innis unveiled a new tile wall in July 2016 in honor of the victims who died in the Brussels attacks on March 22, 2016. Benoît’s pre-existing, minimalist portraits in the Maelbeek metro station were shared widely on social media in the aftermath of the attacks, becoming a symbol of solidarity.

The memorial piece, a tiled wall of more than six meters wide, is a work of universal appeal meant to speak to anyone, regardless of their cultural background. A poem by Gabriel García Lorca, translated to Dutch and French, is combined with a drawing by Brussels-based Benoît van Innis – known simply by his pen name, Benoît.

Benoît is also responsible for the eight portraits on white Portuguese tiles that have decorated the Maelbeek station since 2000. They are well liked by the commuting public for their simplicity and modern feel. The artist, known for his pure and straight-on style, had originally meant for the everyday faces to represent the anonymity of the Brussels subway passengers. “Today the original meaning of those ‘anonymous portraits’ has come to be the face of the anonymous, innocent victims,” Benoît told BRUZZ.

Nice to see you again my dear friends. It's been a while. #Maelbeek #MorningCommute #BrusselsLife #Conference

With most of his works still intact after the bombing, people on Twitter, Instagram and other social media outlets started spreading photographs of the faces Benoît had drawn in clean black lines. A video featuring people from different backgrounds showed them wearing stickers with the various faces on them. One woman added a tear to one of the portraits several days after the attacks, an image that has come to be part of Brussels’ collective memory.

Only one of Benoît’s works was heavily damaged due to the vibrations the bombing caused. The tiled wall on the mezzanine leading to the exit at the Etterbeeksesteenweg had to be covered up. It’s this spot that has been chosen by the metro operator MIVB and the Brussels administration for the Maelbeek memorial.