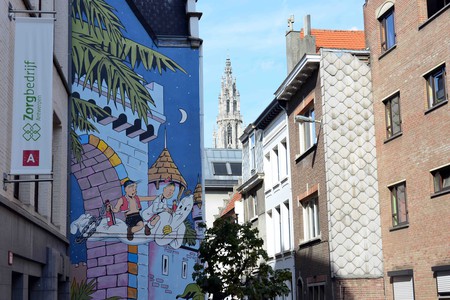 If Brussels is Belgium’s comic strip King, you can call Antwerp its Crown Prince. The city that gave birth to popular Flemish comics Suske and Wiske, Kiekeboe and Nero went in pursuit of the capital’s popular comic strip trail and now boasts ten murals of its own, all by the hands of Flemish talents. Former shabby walls with chipped paint have become house-high frescoes dedicated to paper heroes, providing a standout urban walk across five different neighborhoods.

The 11-year old boy with the straw-colored hair and crazy posse of friends has cornered a spot at the Frans Halsplein. Jommeke has long been a favorite of the youngest comic book fans among us, so what better spot for his homage then the playground-equipped square where all of the neighborhood’s kids converge. The fresco has renamed the square ‘Kinderen Baas’ or ‘Children Rule’ (the favorite album of creator Jef Nys himself) – just to make it more clear. 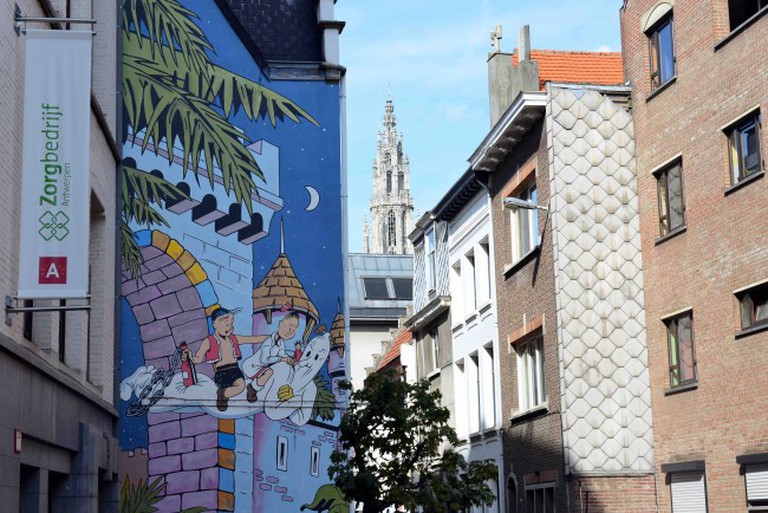 The Kiekeboes, a family known in every Flemish household, have gone shopping in the fashion mecca Antwerp. Creator Mehro has added a whole new charming alley to the Paradijsstraat with this fun trompe l’oeil mural. Especially nifty is the use of the existing street name signage, which also appears to be the name of the new alley. 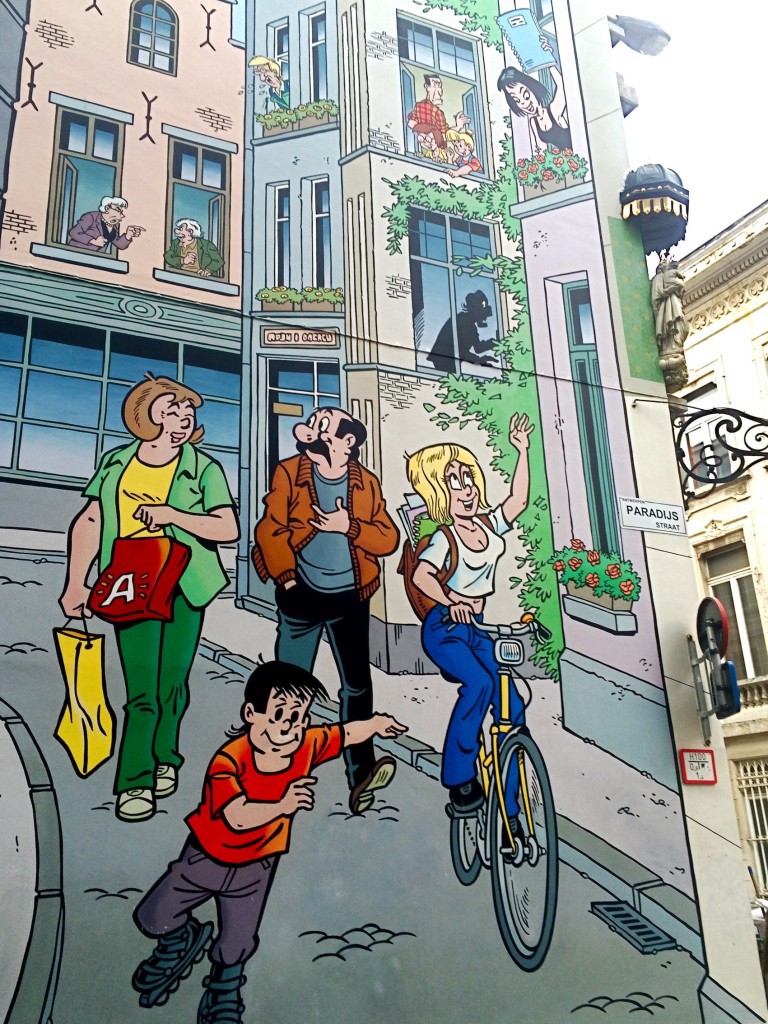 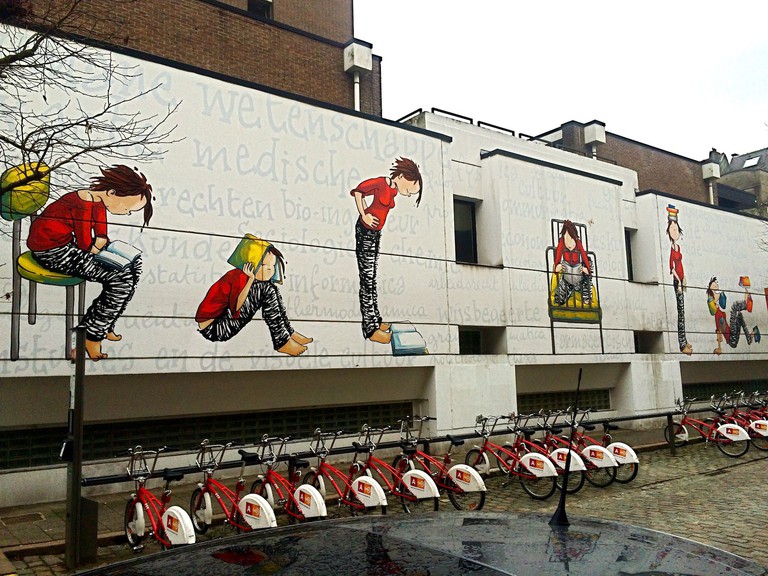 Cordelia by Ilah | Courtesy of Muurvast
Ordered by the University of Antwerp to brighten up the academic neighborhood, this mural shows cartoonist Ilah’s semi-biographical character Cordelia studying her butt off in all sorts of odd positions. The background lettering sums up the university’s different fields of study. 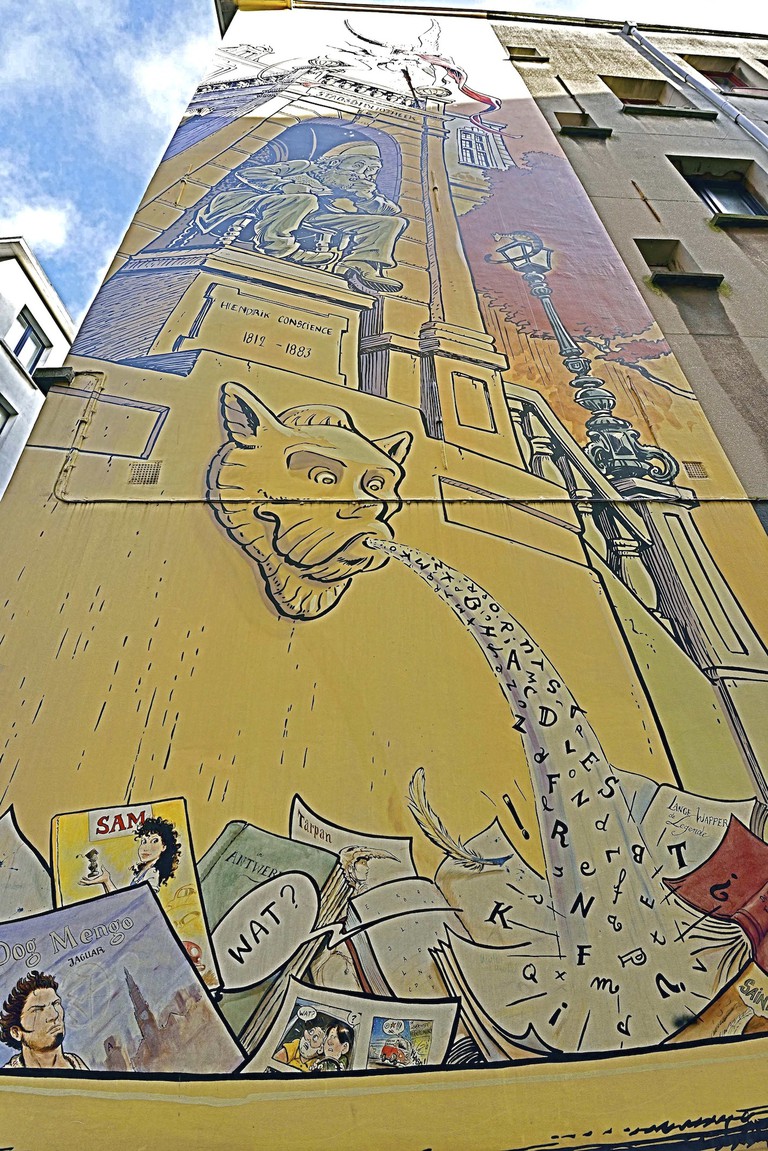 Conscience by Jan Bosschaert | Courtesy of Muurvast
The very first comic mural was designed by Jan Bosschaert and is chock-a-block full of references to the artist’s various works. Nestled in the corner of a small cobbled alley, the fresco shows the statue of author Hendrik Conscience, ‘the man who taught his people how to read’, looking down in surprise from his fountain: his tap is pouring out letters instead of water. The basin is filled with comics by Bosschaert, such as Sam and Jaguar. A bit further the actual sculpture of Conscience adorns the city’s heritage library. 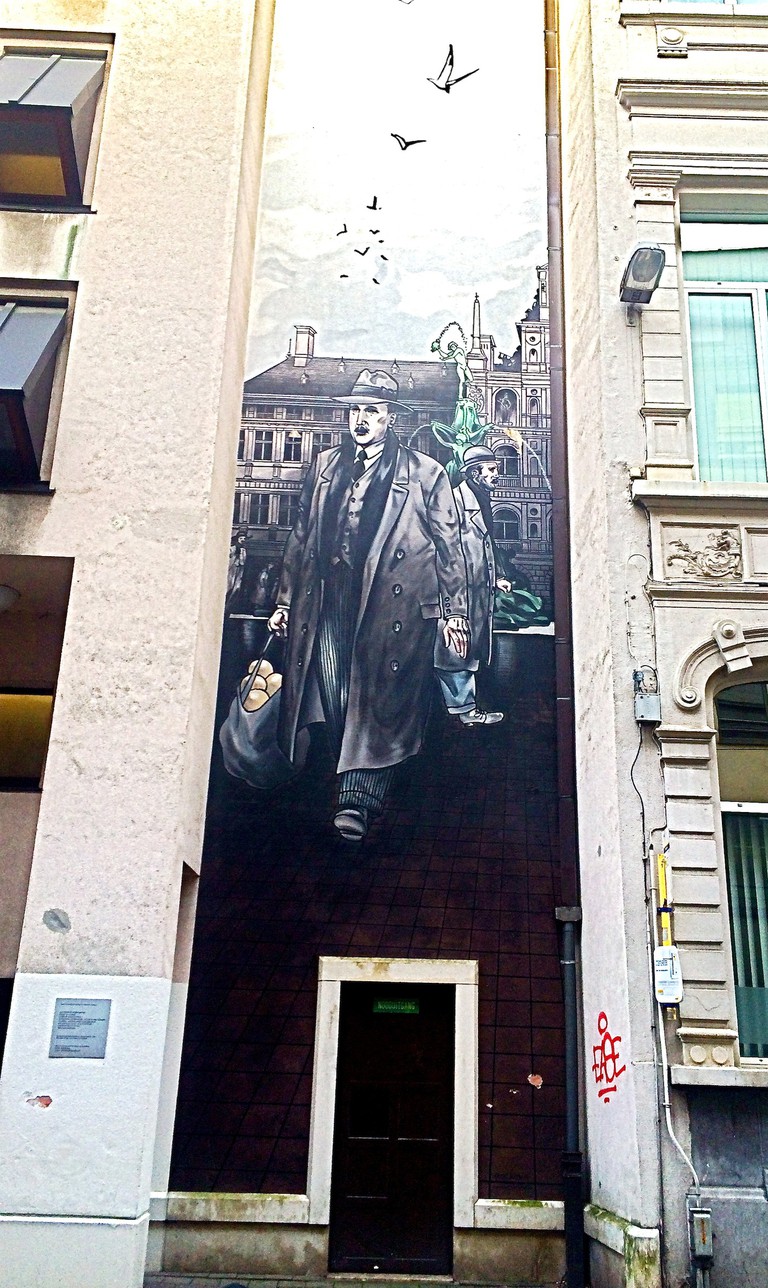 Laarmans by Dick Matena | Courtesy of Muurvast
Also close to the heritage library we bump into Laarmans, protagonist of Willem Elsschot’s novel Kaas(Cheese). This is the cover that Dutch artist Dick Matena had chosen earlier to be the cover to his visual translation to the Antwerp author’s seminal work. The mural shows Laarmans returning home from cheese shopping with the Brabo statue in the background in a magnificent mix of the city’s literary and folkloric past. 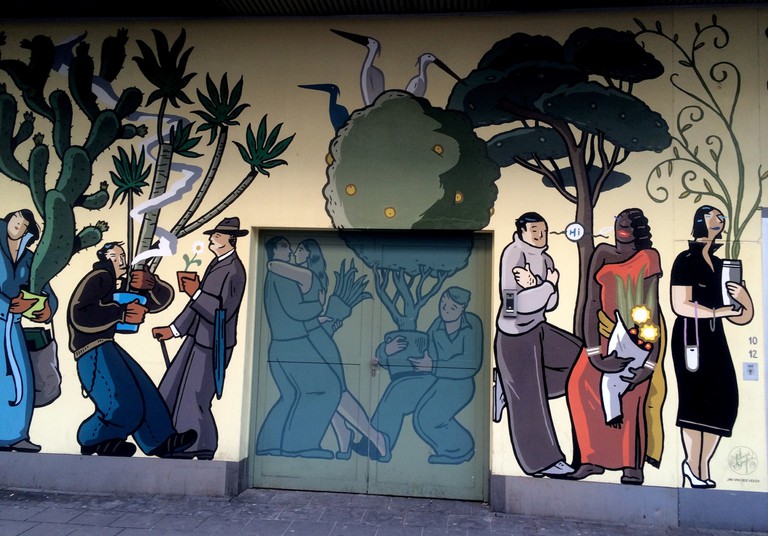 Passage by Jan Van der Veken | Courtesy of Muurvast
For the Boerentoren illustrator Jan Van Der Veken designed a fresco that envelops a long stretch of the building. What starts as a scene of figures whose hair flows in the wind (a reference to the Boerentoren’s drafty passage) becomes greener and greener as it all unfolds. Eventually we follow people carrying around plants they bought into Paradise on Earth.

Suske and Wiske by Willy Vandersteen

Antwerpenaar through and through, Suske and Wiske’s spiritual father Willy Vandersteen loved to let his fondness of his hometown seep through in his comics. This drawing comes straight out of The Island Amoras, the first comic book ever published under the resounding name ‘Suske and Wiske’. In it Vandersteen dreams up an island that resembles a medieval Antwerp. It’s one of the most beloved murals by locals, many of whom have grown up devouring the adventures of the raven-haired boy and golden-haired girl. 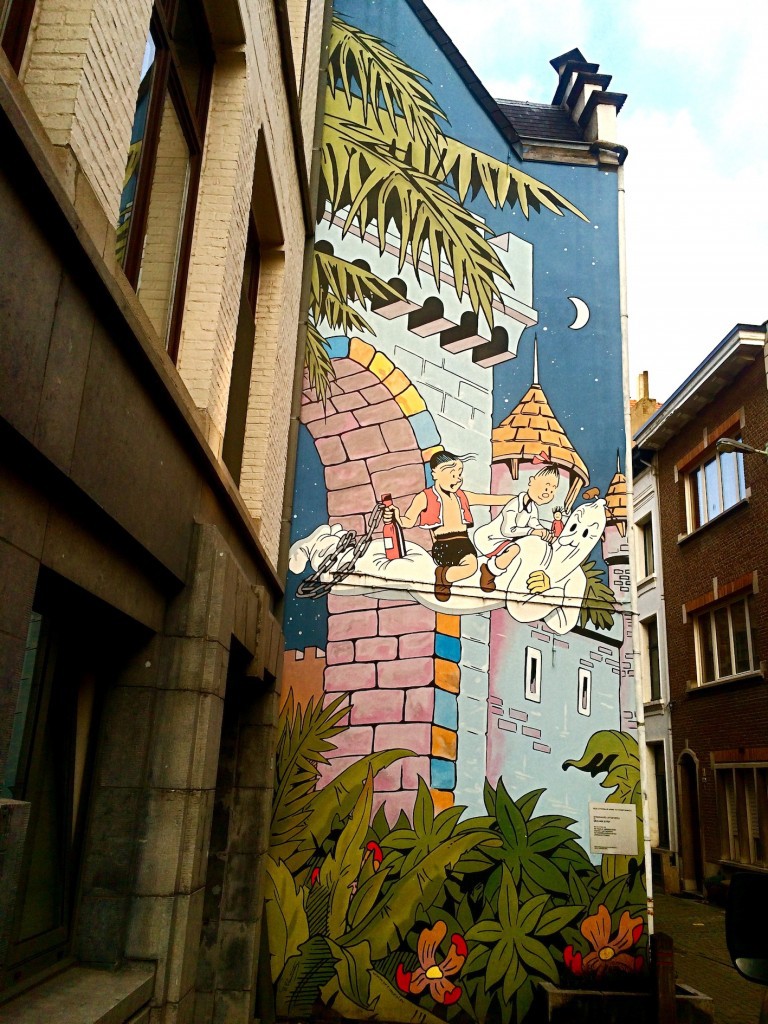 The biggest city canvas of them all so far went to Brecht Evens, the young talent from Hasselt who has come to represent a whole new wave of Flemish comic book authors in the past couple of years. Evens prefers to color outside the box and this piece too is a parade of vibrant colors and associative impressions, free of the rigorous lines comic books can often impose. 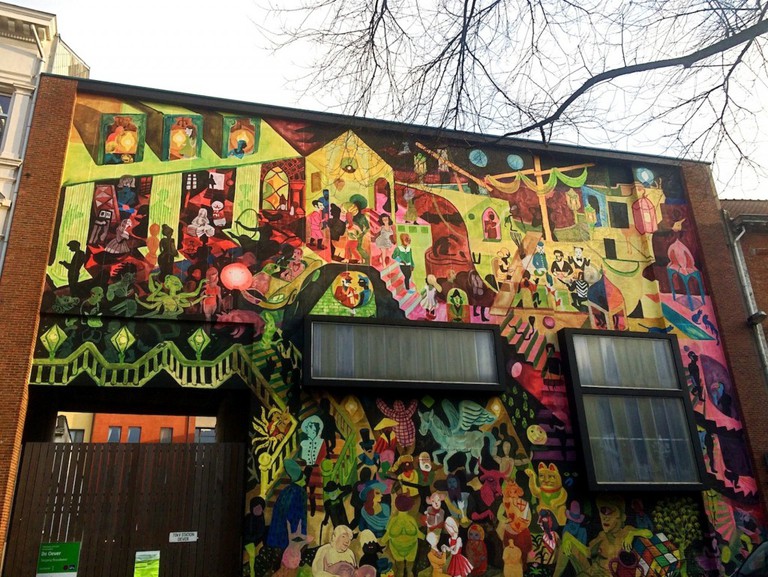 The newest addition to the cheerful bunch honors comic veteran Marc Sleen and his bald, jovial hero Nero. It’s the only double wall, and its drawings have been selected from the album ‘De Oliespuiter’. The fresco lies close to the river Schelde in a dockside neighborhood, so Nero and other characters can be seen setting sail towards the North Pole. 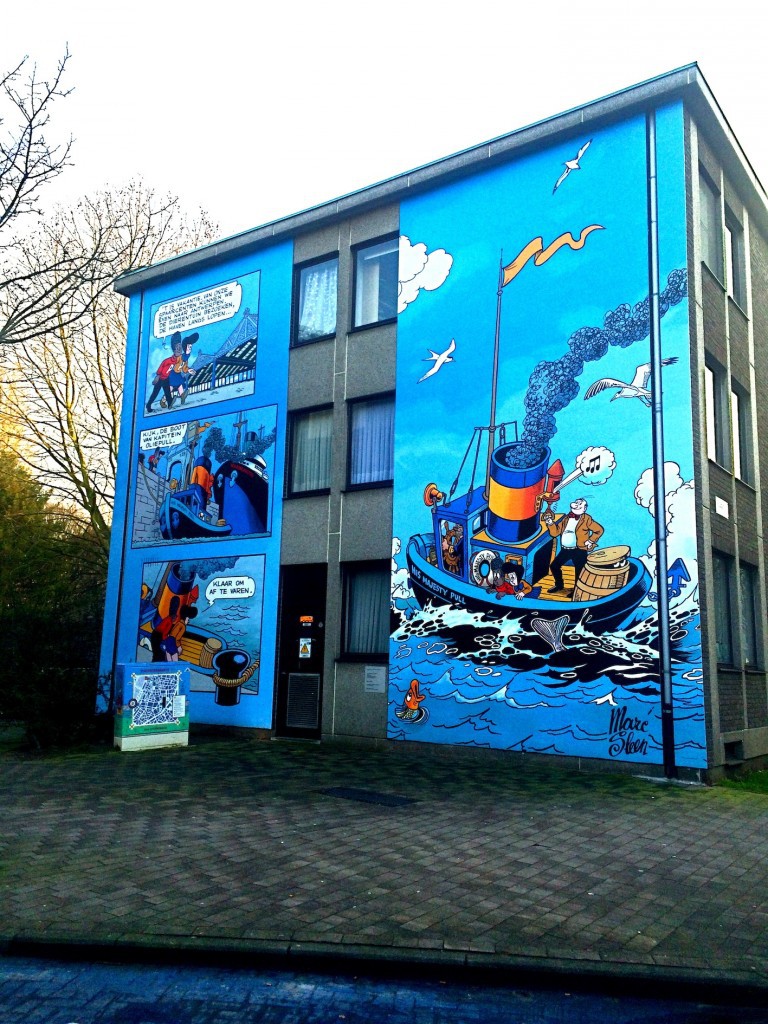 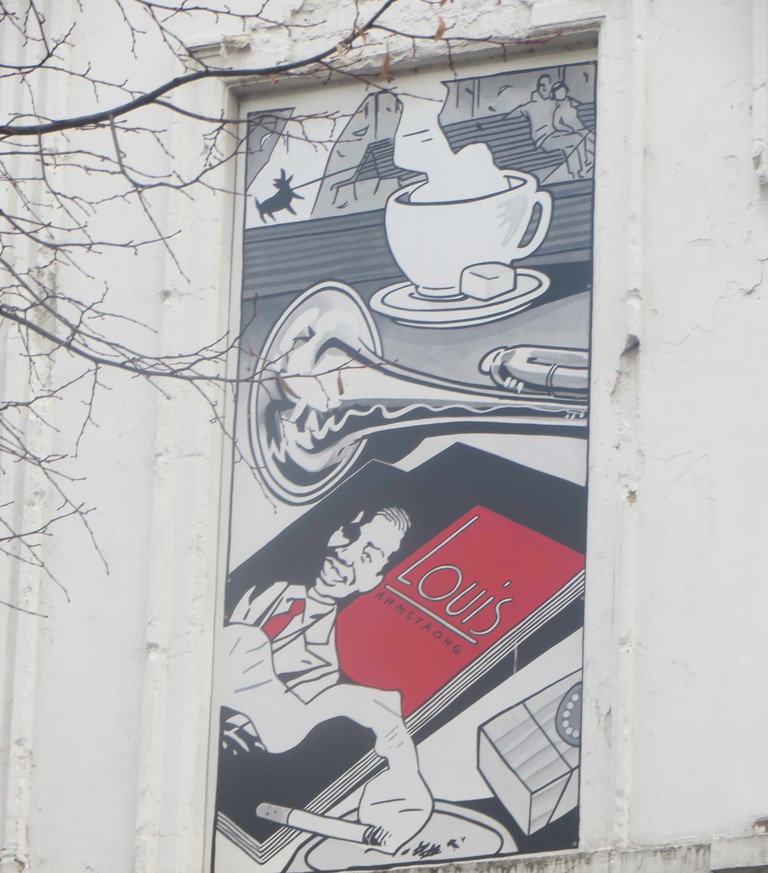 Louis Armstrong by Philip Paquet | Courtesy of Muurvast
On the hip neighborhood ‘het Zuid’, young local Philip Paquet got the opportunity to paint wall number seven. His design paints a picture of what the true-blue Antwerpenaar loves about this area’s general laid-back atmosphere: wine, coffee, a quiet moment to read, the Royal Museum of Fine Arts and some jazz. Look to the sky to spot the fresco in its appropriate location above wine bistro Patine.
Give us feedback