The Legendary Stories of Manneken Pis

Manneken Pis has been a public fountain, a mascot and the hero of many incredible tales. He has received gifts from lords and kings and has been abducted and saved several times. Since little is known about Manneken Pis, here’s a brief history of the little statue.

It’s easy to overlook Brussels’ Manneken Pis between the tourist shops and waffle stands. Located at the corner of Rue de l’Étuve and Rue du Chêne, there is no clear explanation as to why the statue stands there. 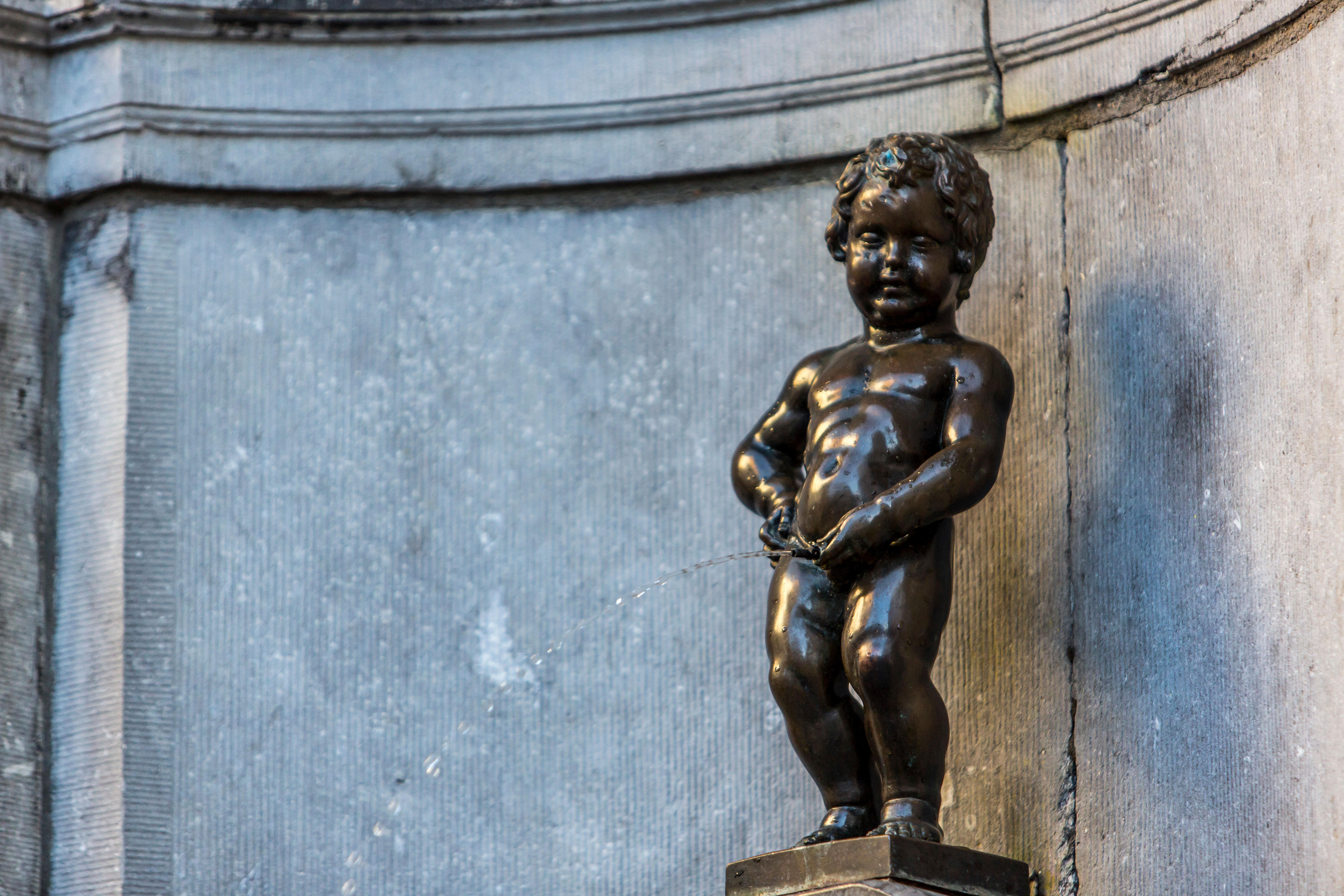 Why is there a statue of a peeing boy in Brussels?

The statue’s name, quite literally, means “peeing little man,” or “peeing boy.” Before this became his title, he was also known as Petit Julien, or ‘little Julien’. There are many fables that surround his origins; some are believable, while others are downright bizarre.

The most probable explanation has to do with the fact that there were many tanners on the Rue de l’Étuve during the Middle Ages. It was not uncommon to let children urinate on leather since the ammonia in urine helps to make the leather more supple. Of course, there is no way of knowing whether Manneken Pis was truly an homage to the tanners. Another popular story states how the boy saved the city of Brussels. The legend goes that Brussels was surrounded by enemies who pretended to retreat, but in reality were hiding gunpowder underneath. A little boy named Julien saw the burning fuse and quickly peed on it. Out of gratitude, the city made a statue in his likeness.

One of the more whimsical versions of how the statue came to be involves a witch catching a boy peeing on her front door. Furious, she cursed him so he would pee for eternity. Luckily, a man who had seen everything quickly replaced the boy with a statue. In another version, the witch succeeded, not only cursing the lad with a forever full bladder but also turning him into stone. 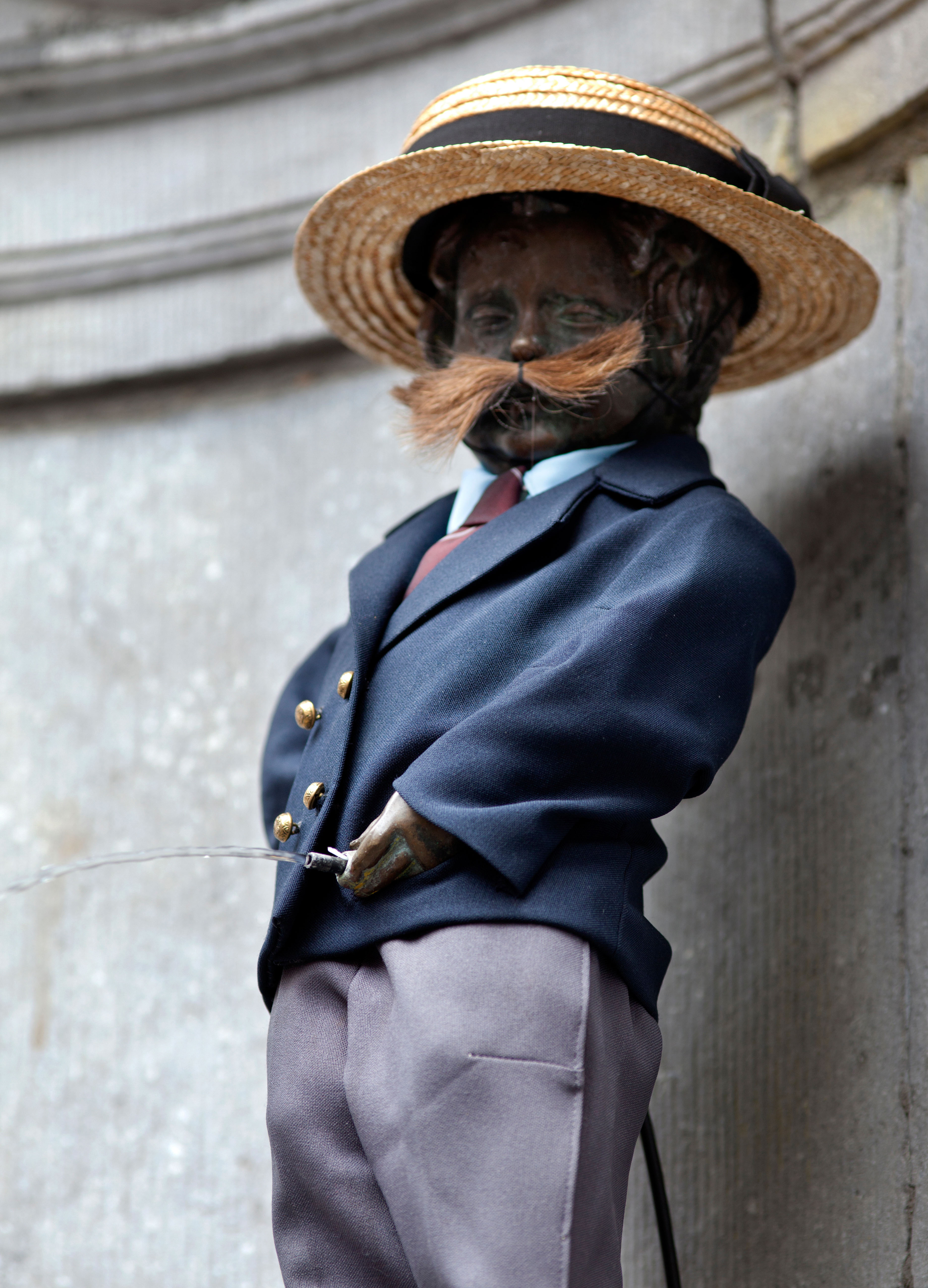 A more believable tale details Manneken Pis as a boy who went missing during festivities in the city. His panicked parents searched for days until they found him peeing on the street corner. Sometimes the father in this story is a wealthy merchant who then decided to put the statue on the very corner he found his beloved son.

There are two stories in which Manneken Pis is actually the young Duke Godfrey III of Leuven. In the first one, he ran away from his father’s castle so he could play with other children in Brussels and was finally found on the famous street corner.

The more fantastical of the two legends say, however, that the young Duke was tied to an oak tree during battle. When Godfrey was two years old, his father died and two noblemen from the house of Berthout declared war. Godfrey’s guardians asked the Count of Flanders for help. The Count agreed, but his troops were unsure, demanding to see who exactly they were fighting for. To satisfy his army, the infant was shown and taken to battle. There, Godfrey was placed in a basket that hung from an oak tree as a symbol of encouragement for the troops. And encourage them he did – every now and then the little Godfrey stood up and peed on the heads of the Berthout enemies. Godfrey’s allies won the battle and celebrated in Brussels, where they planted the oak tree. Legend states that this is why the street next to Manneken Pis is named Rue du Chêne, meaning ‘oak street.’ And, of course, next to the oak, they erected a statue of the young peeing lord. 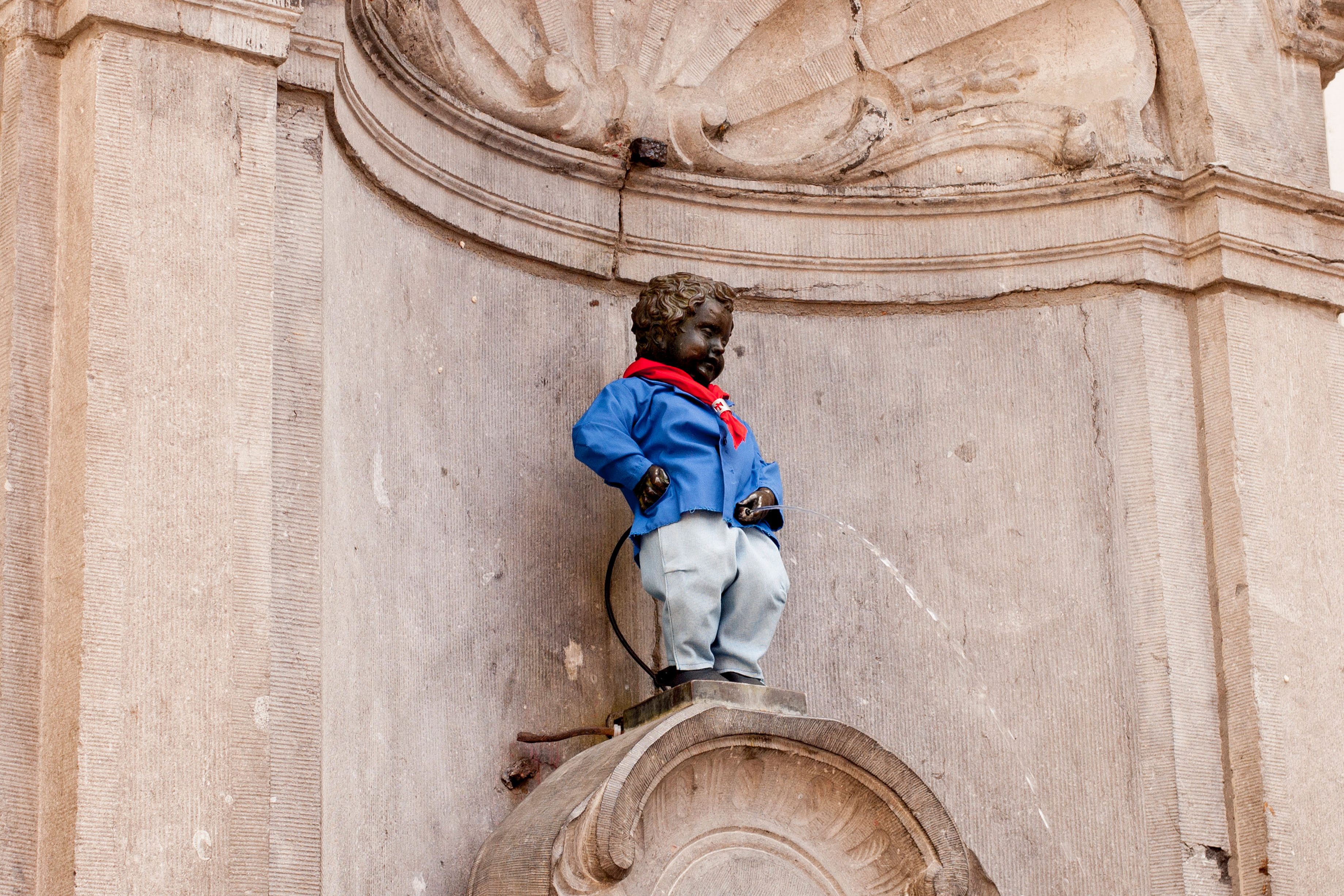 Is this the original Manneken Pis?

The name Manneken Pis was first mentioned in archives dating back to 1452. Before that, he was named Petit Julien and was a part of a public fountain on the same street corner. The stone statue was replaced by a bronze sculpture made by Hiëronymus Duquesnoy the Elder in 1619. It is unknown whether the replica resembles the first one, as the original was not preserved.

The statue by Hiëronymus Duquesnoy was destroyed in 1817 and was stolen by a former convict named Antoine Licas. Fortunately, the pieces were found and glued together to make a mold for a replica.

The current statue was made in 1965, after Manneken Pis had disappeared again. After several months, the broken statue was found in the Brussels canal and currently resides in the Maison du Roi at the Grand Place. 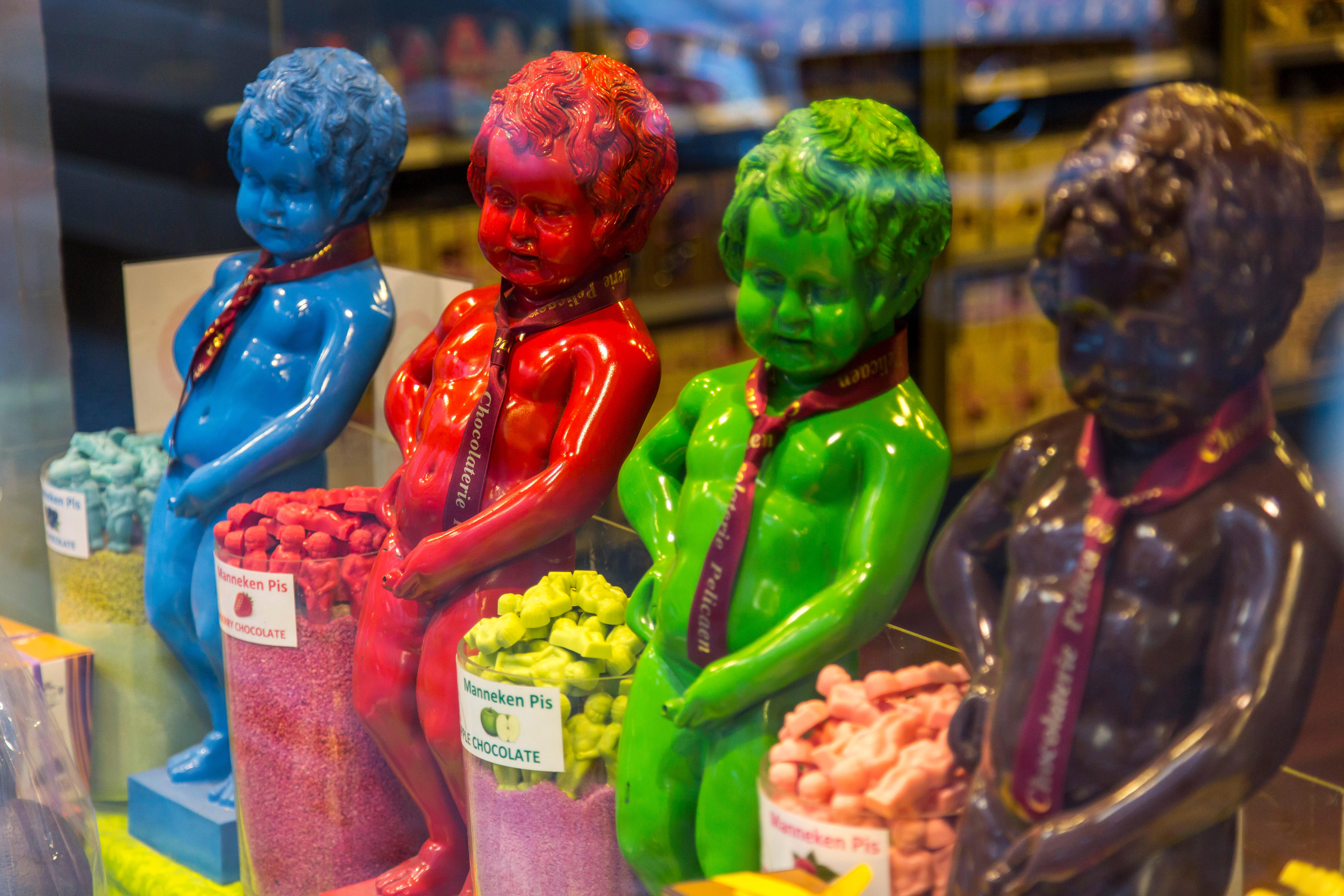 How many times has the Manneken Pis been stolen?

Manneken Pis has been stolen and retrieved several times throughout history. In 1745, it was stolen by English soldiers and was later found in the city of Geraardsbergen. To thank the helpful people of Geraardsbergen, a replica was gifted to the city.

It was stolen again in 1747 by French Grenadiers who were in Brussels as a part of Louis XV of France’s army. The population of Brussels revolted, almost causing a riot. To make up for the behavior of his soldiers, Louis XV gave Manneken Pis beautiful clothes in brocade, embroidered with gold.

One of the more recent times it was stolen was on a cold winter’s night in 1963, as part of a prank by the Antwerp Student’s Union de Wikings. The last time it was stolen was just two years later in 1965, and the perpetrator broke the statue off at the ankles.

Why is Manneken Pis often dressed up?

It’s a tradition in Brussels to dress the little bronze statue at special occasions. His wardrobe, which contains more than 800 costumes including the expensive outfit gifted by Louis XV of France, is kept at the Maison du Roi. The first clothes Manneken Pis ever received were gifted by Maximilian II Emanuel, Elector of Bavaria, who was the governor of the Austrian Netherlands. As well as historical clothing, the wardrobe also contains modern costumes, such as a Mickey Mouse and Santa Claus costume. 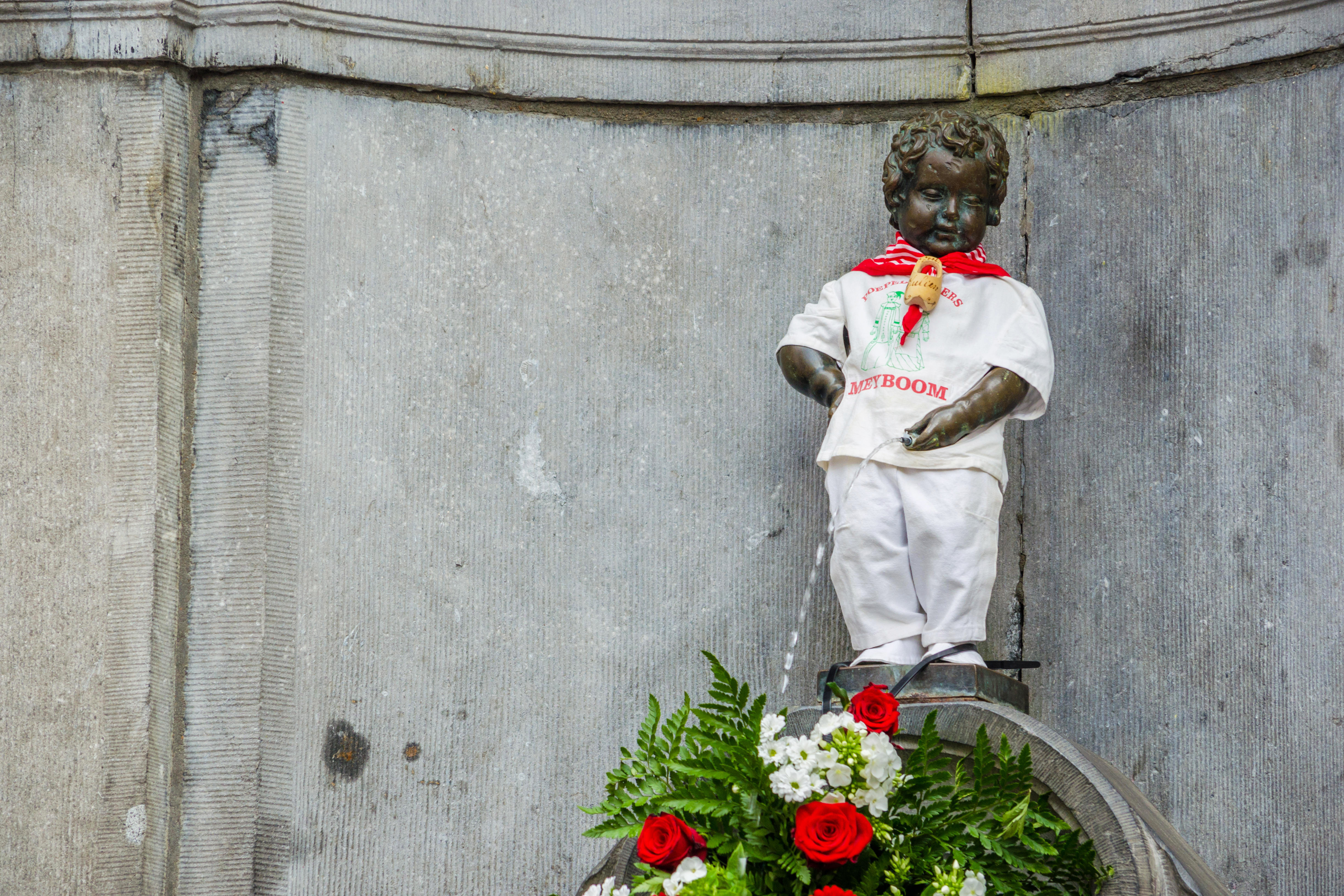 Manneken Pis is not the only peeing statue in Brussels. In 1987, he was joined by a peeing girl named Jeanneke Pis. Her statue can be found on a dead-end street, near the Rue des Bouchers. The family expanded in 1998 with Zinneke Pis, a peeing dog. This statue was placed on the sidewalk of Rue de Chartreux. If you end up finding all three, you’ll be sure to come away with a series of funny pictures. After all, out of all the statues and symbols Brussels could have chosen as a mascot, its sense of humor picked a little peeing boy, with many legends to its name. 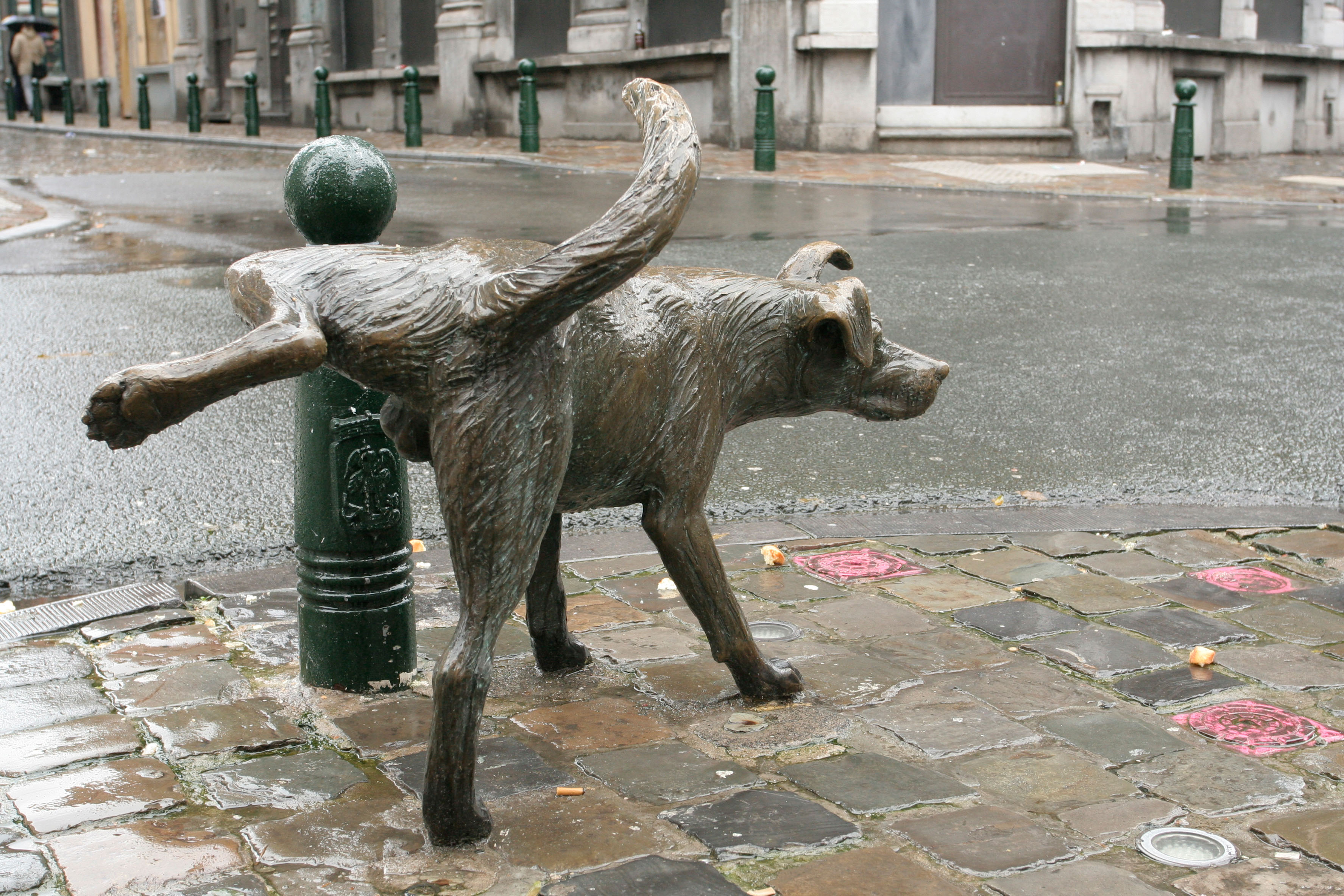