The History Of The Cinquantenaire Park In 1 Minute 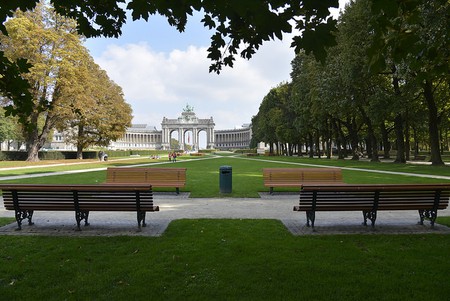 Amid the hustle and bustle of Brussels lies a patch of greenery that has taken root in the capital’s inhabitants’ hearts. Home to three history museums, a Temple of Human Passions, and a fortune-bringing green dog, the stately Cinquantenaire Park has a royal history of greatness.

From atop of its grand triumphal arch, it’s clear why the park, erected in 1880 to celebrate Belgium’s 50 years of independence, has so much charm. Just like its metropolis, the 90 acre domain dotted with statues and expertly trimmed hedges are many things all at once. Its alluring blend of urban nature escape and cultural hotbed hits the Brusseleir sweet spot. 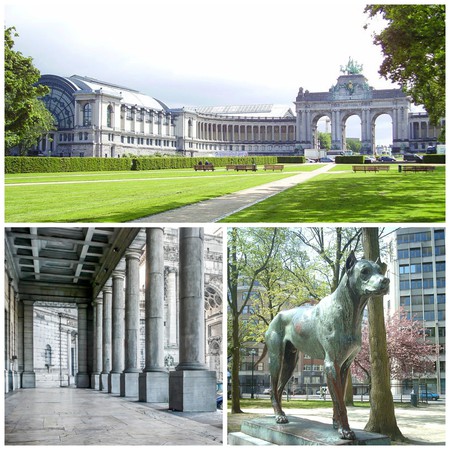 On sunny spring days lunch breakers stream into the park to claim their prime picnic spot on the stretched out lawns. And while shade is provided by a u-shaped pillared building with beautiful finishes in iron and glass (a Belgian specialty at the time of its design), a surprising amount of visitors remain unaware of the treasures inside.

The Cinquaintenaire Museum has history buffs salivating at the prehistoric artifacts from all corners of the world. Car enthusiasts get their fix at AutoWorld, and The Royal Military Museum displays equipment such as fighter planes and tanks that give you a context for the two World Wars that rocked the Belgian nation to its core. Even if the pressing sense of history escapes some, there’s always the magnificent view of the park below.

Since we are talking about a domain built at the request of a king (Leopold II), the other side of the park isn’t without its cultural goodies either. The curious Temple of Human Passions – only open to the public in summer – showcases the work of a young Victor Horta and his first steps in becoming an Art Nouveau deity. On the west side, almost obscured from view by a grouping of tall trees, we find the Great Mosque.

To top it all off, several statues by sculptor Jean-Baptiste van Heffen are scattered throughout the park, the most intriguing of which is the Green Dog. Rubbing its legs – the legend goes – will bring you good luck. The pooch’s paws are already smooth from the many schlemiels hoping to change their fate during a day at the stunning Cinquantenaire.