The History of the Brussels Tram Museum in One Minute 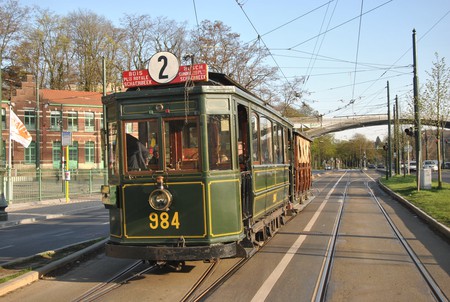 Though Belgium has a rich history regarding trains and rail travel, the urban transport system in its capital, Brussels, has also played an important role in its development as a city. At the Museum of Urban Transport (Tram Museum), you can learn more about the history of Brussels’ fascinating transport network and cruise through the city aboard a vintage vehicle.

Located in a historic tram depot in the quiet commune of Woluwe-Saint-Pierre, Brussels’ Tram Museum – officially known as Musée du Transport Urbain Bruxellois in French and Museum voor het Stedelijk Vervoer te Brussel in Dutch – perfectly complements the residential streets and parks which surround it. You’ll know it when you see the row of pretty mint-green gables as you stroll north on Avenue de Tervueren in the east of the city – but its pretty facade is just a taste of what’s to come.

The depot was created – like the avenue on which it sits – for the Brussels International Exposition of 1897. King Leopold II – then-king of Belgium – envisioned a great artery, but was also insistent that there should be excellent transport links between the exhibition’s two main sites: a colonial exhibition here in Tervueren, and the palaces in Cinquantenaire Park. When the exhibition was over, the depot’s ownership transferred to the train company, Ixelles-Boondael, and its reputation as a busy transport hub was sealed.

The depot flourished for many years, and by 1952 could hold an incredible 285 tram cars. However, by the mid-70s it began to be gradually abandoned and was soon out of use, only to be rescued in 1977, when it was given new life as the home of the city’s transport museum.

Since its official opening in 1987, the museum has housed an extensive collection of the antique buses, trams and taxis that were once used in the capital, beautifully showcasing the historic evolution of transportation in Brussels. Better yet, visitors can even hop aboard one of these antique vehicles to take a unique scenic tour of Brussels – particularly delightful during the summer months.