The Coolest Neighborhoods in Bruges, Belgium

Compared to other Belgian hubs, the egg-shaped center of Bruges is a pocket-sized treasure, not to mention it’s strewn with historic landmarks. We dip into the picturesque city for a look at its most attractive neighborhoods.

Not too many peaceful nooks and crannies remain in Bruges when the tourists fan out in droves between March and November. A reliable refuge is the Sint-Anna Quarter, with the Sint-Anna Church and its rich Baroque interior at the heart of it. This is where Bruges’ blue-collar workers lived their lives and today its web of cobbled lanes is about as tranquil as the “Venice of the North” will get. Running like an artery through it is the exception: the Langestraat, a bustling lane lined with candle-lit tapas bars and cozy eateries, ending in the green belt which surrounds the city core and that boasts four ancient windmills. The 15th-century Jerusalem Chapel, an exact replica of Jerusalem’s Church of the Holy Sepulchre, built by a patriarch of the affluent Adornes family, serves as one of Bruges’ oddest landmarks. The same family’s homey boutique hotel sits on the Sint-Annarei, a waterside lane offering as scenic an evening walk as we can imagine. 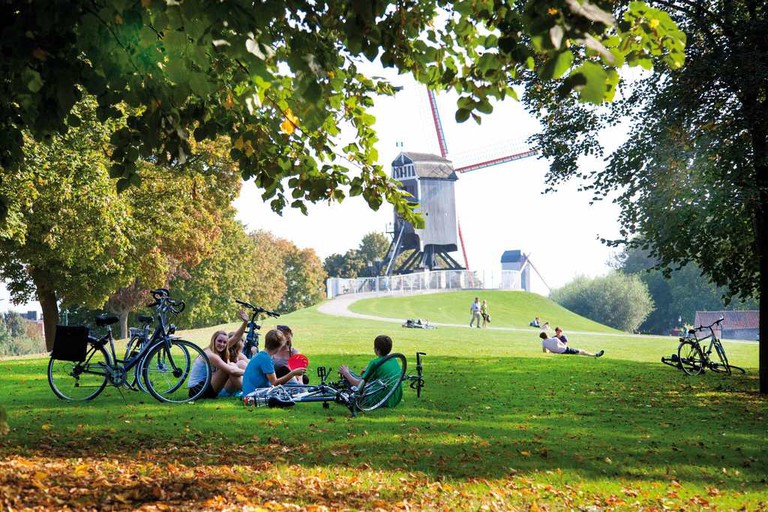 On one end of the Sint-Anna neighborhood, greenery and windmills | © Jan D’Hondt / courtesy of Visit Bruges

‘t Zand’s main draw is the opportunities it offers for bigger events. Sitting on the edge of the southwest inner city border, it boasts the biggest square in town, an ideal setting to host one of Flanders’ biggest antique and brocante markets. One Sunday a month in summer is dedicated to these “Zandfeesten” as bargain hunters flock from all over Belgium and neighboring countries in search of cheap antiques. Another summer treat is the beloved Cactus Festival, which for three days fills the plaza with tunes from every corner of the world. Alongside these events, the thing ’t Zand is most known for is its state-of-the-art concert building in striking sandstone red. Concertgoers can nowadays go for a comfortable aftershow palaver at the newly-opened James Pub, while partygoers who started off in the center often end the night at one of the other bars lining the square. 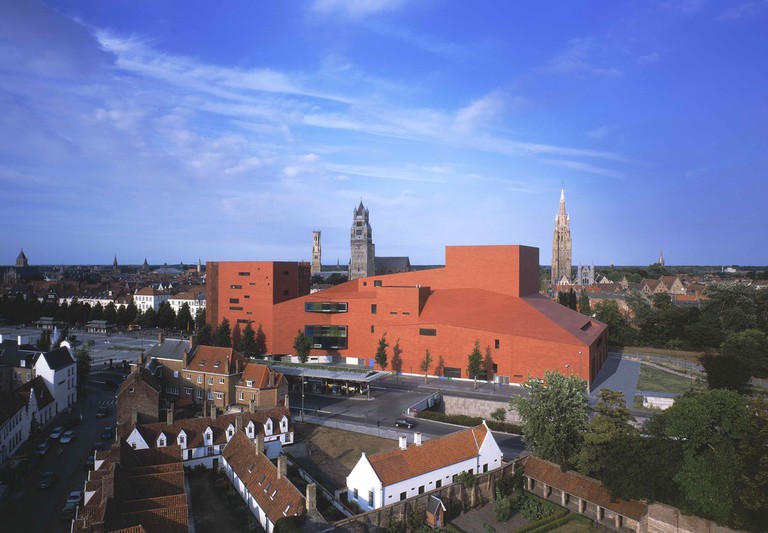 Part of the Onze-Lieve-Vrouw Quarter is navigating tourist masses left and right, but of course there’s a reason for these streets’ popularity. Dominated by the Church of Our Lady and its soaring brick tower, this is where you hop from one art treasure to another in rapid succession. While the Lady harbors Michelangelo’s marble white Madonna, it only takes the shortest of strolls across the romantic Bonifacius Bridge to reach the Groeningemuseum, where an impressive selection of Flemish Primitives await. In between there’s the walled-off Arentshof, whose eerie statues depicting the Four Horsemen of the Apocalypse stand among tall trees. Moving on to other Belgian staples, the urban brewery Halve Maan has its headquarters here, as do a lot of chocolatiers in the Katelijnestraat. Sold in these latter sweet-tooth havens is the official city praline in the form of an elegant little swan. Eat them while enjoying a view of their real-life counterparts waddling happily around the Beguinage, another lovely spot in the neighborhood. 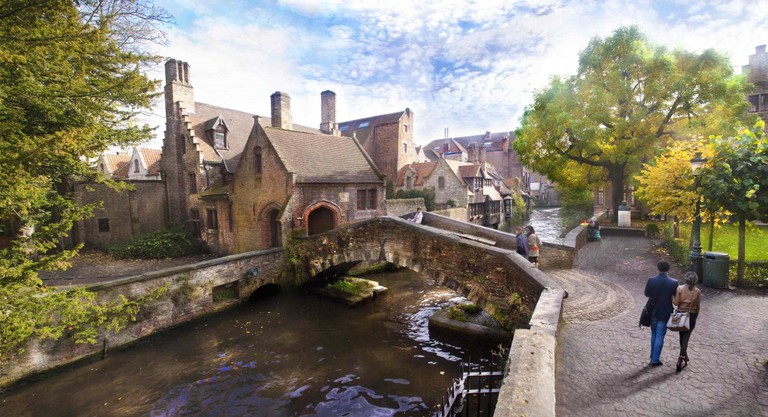 The Ezelstraat Quarter in the northwest is mainly known because of its 800-year-old Ezelstraat street that’s become a tangible hip presence in an otherwise fairly traditional town. The lane, long ago home to Flemish Master Hans Memling, forms a pleasant entry into the town core with its Scandinavian design stores, shoe boutiques, characterful art galleries and artisanal biscuit makers. On sunny days the courtyard café of hostel Snuffel attracts a pleasant mix of locals and backpackers.