The Best Public Art In Belgium

'Heaven of Delight' by Jan Fabre, a beetle ceiling commissioned by the Belgian Queen | © Tomato INABA/Flickr
With Arne Quinze, Will Delvoye, and Jan Fabre, Belgium has sprouted some of the most impressive minds creating art for the public space today. Royal ceilings covered in iridescent beetle shields, strange orange-hued rocks dropped on the coastline, and see-through churches are just some of the surreal wonders dotting the land throughout the tiny country.

The Sequence by Arne Quinze

‘Cities like open-air museums’ – this is what Belgium’s most prolific artist in the public space dreams of. Part of Arne Quinze’s wish came true on Brussels’ Louvain Road, where one of his immense sculptures took over in 2008. Through the street leading to the Flemish Parliament weaved a spiky cloud of bright orange wooden sticks – it was baptized The Sequence. At 80 meters longs and 15 meters high, the giant became an integral part of the landscape until it was eventually taken down six years later. The Sequence was always meant to be a temporary display; after deconstruction, all of the wood was recycled.

Brussels’ cloud of wood may have evaporated in 2014, but by that time, a new electric orange – and permanent – Quinze creation had already landed in Ostend. In 2012, the coastal town’s Heroes of the Sea Square suddenly found itself populated by massive blocks of dented metal. Rock Strangers, as Quinze calls them, are located in between the sweeping views of the North Atlantic and the stretched-out walkway, attracting curious passersby. 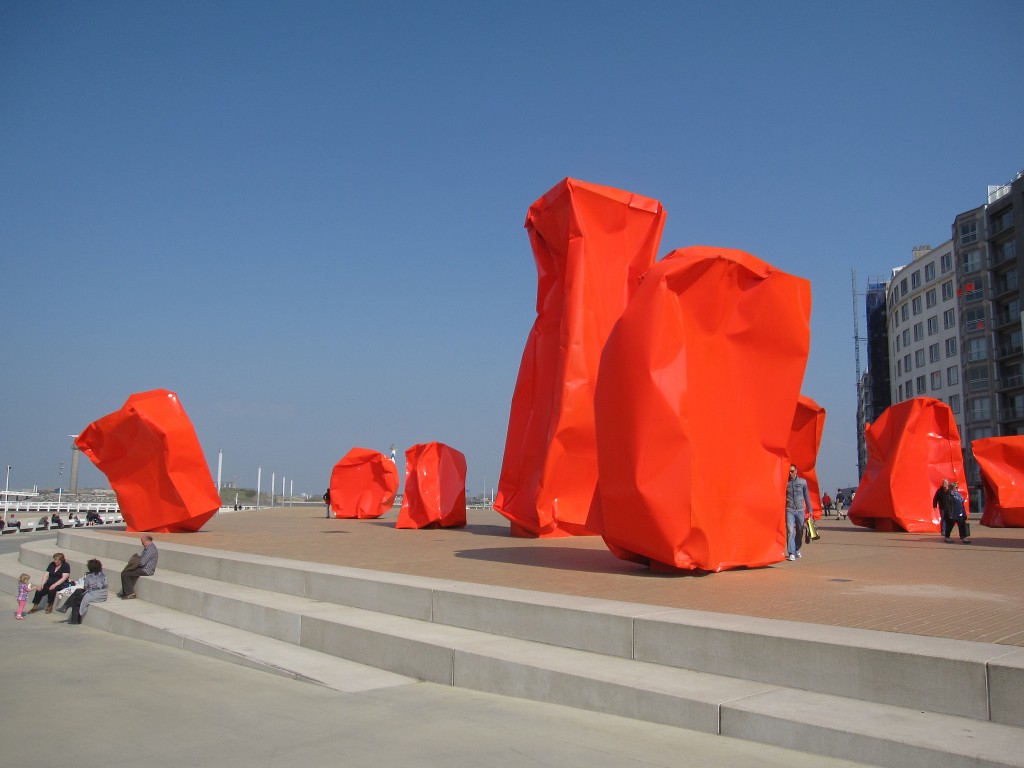 Reading between the lines by Gijs Van Vaerenbergh

Building, Architectural Landmark, Church
Reading between the lines by Gijs Van Vaerenbergh | © Johan Neven/Flickr
Perspective is what it all comes down to when witnessing Gijs Van Vaerenbergh’s see-through church. At one moment, the construction of weathered steel plates is but a line drawing in the sky; at another, it’s as solid as the actual church of the village that lies behind it. The work invites multiple glances from several standpoints in its meadow, but it also welcomes the viewer to step inside and see the landscape transformed through its cracks. Reading between the lines is an exciting exercise in perspective that put Gijs Van Vaerenbergh – or rather the young architecture duo Pieterjan Gijs and Arnout Van Vaerenbergh – on the map in 2012.
More Info
Open In Google Maps
Borgloon, Flanders, 3840, Belgium
+3211295960

Building
The largest square in Leuven, an elegant affair with long cobbled steps and the university library in the Neo-Renaissance style, is where you’ll find a giant bug floating 23 meters up in the air, impaled on an Inox needle. Unsuspecting passersby who look up sometimes mistake the unlucky bug for a fly, but those familiar with the work of Jan Fabre will immediately recognize an overturned beetle. This time, the renowned visual artist has put his signature scarabee up on a totem meant to honor knowledge, memory, and science – a message perfectly appropriate for the gift that the University of Leuven offered to the city on the occasion of its 575th birthday in 2004.
More Info
Open In Google Maps
Leuven, Flanders, Belgium
Visit website

Heaven of Delight by Jan Fabre

Delve further into Fabre’s oeuvre, and you’ll discover Totem was actually a postscript in the Antwerp-born artist’s beetle period. At the behest of art-loving Queen Paola, Fabre let loose his odd genius on the Royal Palace’s Hall of Mirrors two years earlier. The result: a ceiling – and chandelier – covered in glorious mosaics, composed of over 1.5 million blue-greenish beetle wing cases. The beauty of the work, called Heaven of Delight, is striking, as is the knowledge that it consists of what are essentially shiny carcasses. According to Fabre, the masterpiece hides several symbols – the legs of giraffes, severed hands, and skulls – that criticize Belgium’s colonial past in the Congo, though the palace itself and its tens of thousands of visitors have yet to discover them. 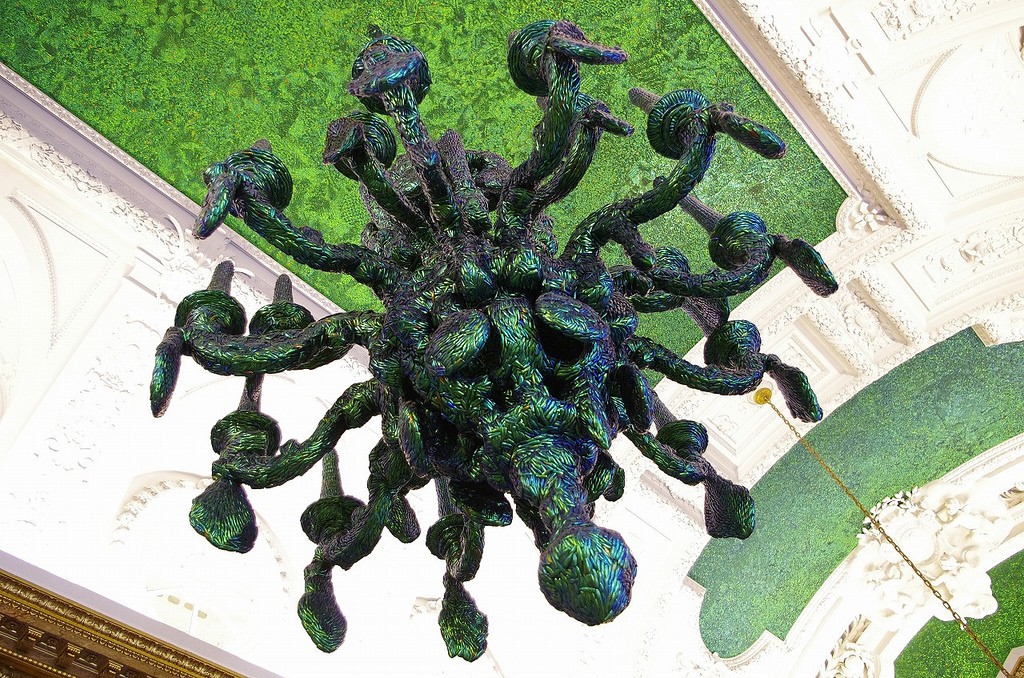 Park
More commonly known as the ‘Giant Clothespin,’ Skin 2 by Turkish artist/academic Mehmet Ali Uysal appears to be pinching together a little hill in Chaudfontaine’s Hauster Park, on the outskirts of Liège. The surreal scene was created for the park’s Five Seasons Festival and regularly baffles hikers and bikers who come here for the gorgeous Ardennes greenery.
More Info
Open In Google Maps
Chaudfontaine, Belgium

The Virgin by Michaël Borremans

Market
You’d almost miss renowned painter Michaël Borremans’ contribution to his beloved Ghent if you weren’t looking for it. On a large slab of upright concrete near Town Hall and the extraordinary Market Hall, The Virgin now looks over the city and its foot traffic. The artist’s first-ever work for a public space – Borremans’ paintings tend to sell for large sums abroad – is a small oil portrait in his signature 18th-century style, only with her eyes mysteriously beaming light.
More Info
Open In Google Maps
Ghent, Belgium

Ready to take a deep dive, the acrobatic Le Plongeur stands on his hands on a steel bow over the Albert Canal. The almost 80-year-old sculpture by Romanian artist Idel Lanchelevici was originally made for the International Exposition of Water in Liège in 1939 to celebrate the completion of the canal. Thanks to a great reception, the city ordered a copy in more durable materials for permanent display, but due to the Second World War, the statue wound up in the basement of the Palace of Fine Arts for nearly five decades. Dug up in 1998 and restored in all its glory, Le Plongeur resumed his balancing act in 2000. At one point, the daredevil even got a bright yellow buoy put around his waist by a concerned citizen. 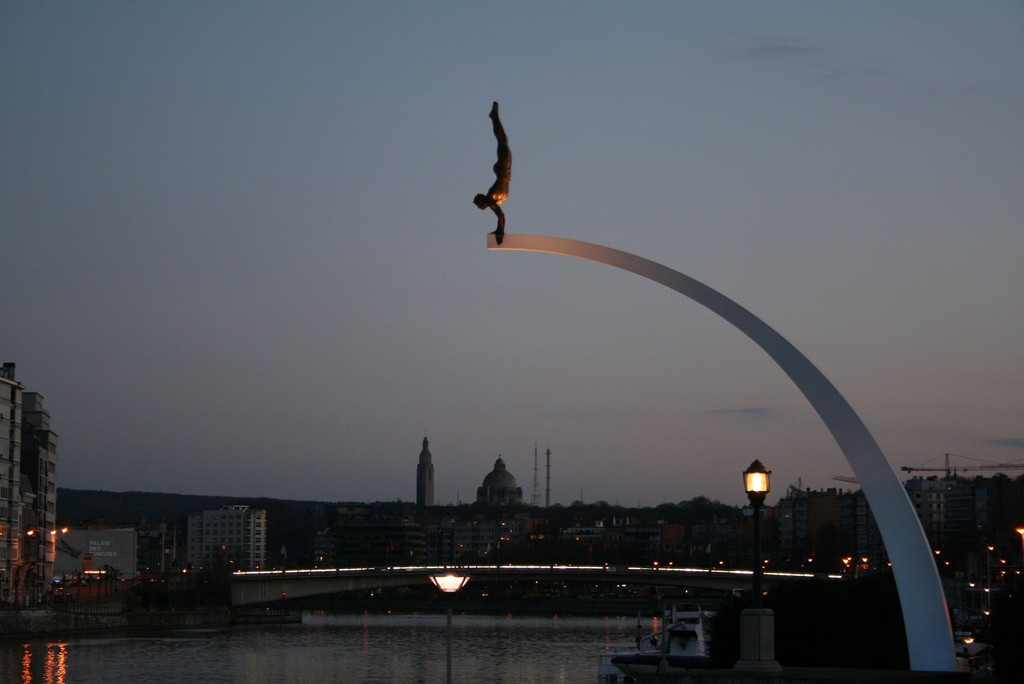 The Beaufort Triennial has produced some strange sights on the Belgian coast over the years. Besides Jan Fabre’s Searching for Utopia – an unusual self-portrait in the form of the artist riding a massive golden sea turtle – another work from the first edition has earned a permanent seaside spot. Caterpillar 5bis, created by the unconventional Wim Delvoye, looks like a rusted crawler tractor from afar until you see laser-cut filigree and an ornate church tower that have been worked into the piece of art. Part of the same series in stainless steel and boasting even more Gothic flourishes is Delvoye’s Cement Truck, currently residing in a Brussels park.