The Best Free Things To Do In Bruges

Magnificent, ancient, romantic, utterly adorable – the superlatives swung at Bruges seem to know no bounds. And while the quaint medieval city is without a doubt worthy of praise, another equally fitting adjective that’s often forgotten is ‘expensive’. Read here how to visit the ‘Venice of the North’ without burning a hole in your pocket.

With its plethora of medieval details, Bruges is begging to be explored on foot. The city is small; simply walking across from one side of the old ramparts to the other will take no more than 35 minutes, so getting lost almost requires effort. Feel free to take copious detours; many of the picturesque cobbled alleys give the traditional touristic attractions a run for their money, and make sure you save some time in the evening to stroll over the Gouden-Handrei, the Sint-Annarei, the Groenerei and the Bakkersrei, all prime canal-adjacent streets for a romantic saunter. 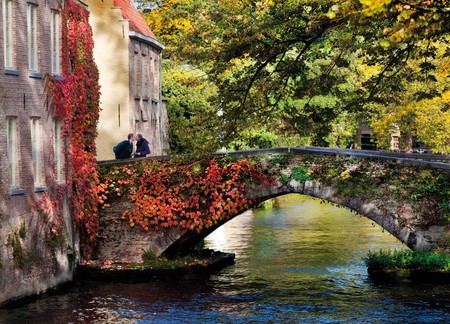 Discover The Tower Of Pisa-Tendencies Of The Belfry

Climbing up the Belfry’s 336 steps costs 8 to 10 euros – not to mention that it’s rather exhausting, with steps becoming smaller towards the end – so why not enjoy the monumental belltower from the ground. If you look long enough, it should start to dawn on you that the 83-meter structure is not standing entirely straight. For now the tilt of a little less than a meter is hardly discernible to the casual passerby, but engineers are on the lookout for a possible Tower of Pisa-scenario. 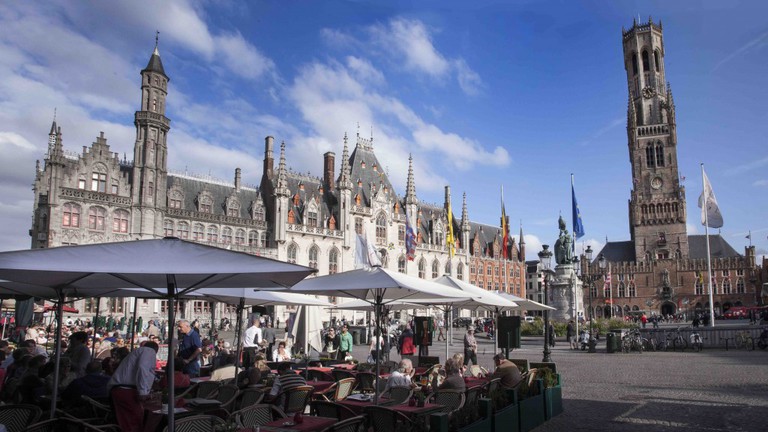 Take A Picnic To A Hidden Green Oasis

If you think the Minnewater Park at the edge of the city center is tranquil and charming (it is), try Hof De Jonghe smack dab in the city center. Reaching this green oasis might take getting over a couple of initial scruples – the route to the hidden gem might make you feel you’re trespassing on private property (you’re not) – but the reward is an idyllic patch where sheep roam around munching on apples that have fallen from the trees. No need to spend your hard-earned dollars or euros on a fancy restaurant: just put together a picnic basket, take a frisbee and spend a delightful afternoon in the sun. Other great picnic opportunities include the aforementioned Minnewater Park with the nearby ‘bridge of eternal love’ and the Arentshof with its gorgeous view of the opulent Gruuthuse palace.

Flashback In Time At The Procession Of The Holy Blood

Time your visit right and you’ll be able to witness ‘Bruges’ Finest Day’ unfold before your eyes. The city has made it a point to uphold the ancient tradition of the Procession of the Holy Blood each Ascension Day, forty days after Easter. For over 700 years groups of locals and priests in medieval garb have been making their way through its streets in a beloved parade that includes floats, brass bands and performances of Biblical scenes. Highlight is the passing of the Relic of the Holy Blood of Jesus Christ, said to have been brought to Bruges by a citizen after the 12th-century Second Crusade. The vial is usually kept inside the Holy Blood Basilica, where it’s brought out to be worshipped every day. 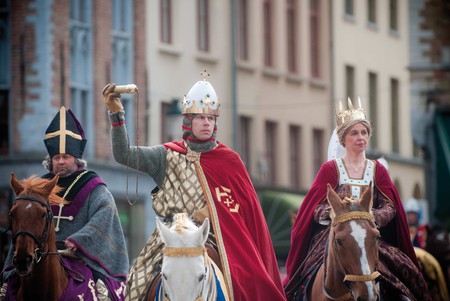 Procession of the Holy Blood | © Jan D'hondt/courtesy of Toerisme Brugge

Follow In The Footsteps Of Colin Farrell’s In Bruges Character

‘Fuckin’ Bruges’, may be grumpy hitman Ray’s catchphrase in the cult comedy In Bruges, a tour of the movie’s key locations is a splendid way to go about your sightseeing. Volunteer guides from Can You Handle It Tours stand at the ready every day with trivia about the film, crucial information about the landmarks you’ll be passing, free chocolate treats and recommendations for where to get great cheap food.

The fact that you have to restrain yourself from buying books doesn’t mean you can’t worship the temples dedicated to them. For those who still prefer the comfort of a physical book in their hands there is In Den Eenhoorn (‘In The Unicorn’), with its tottering piles, and 19th-century De Reyghere (‘The Heron’) with its literary salon – both old-school literary havens. The latter one even features a neighboring travel bookshop as an expansion. Now it’s just a question of emerging with a soothed soul and an safely full wallet (though really, what could a small paperback hurt?).

The ‘Princely Beguinage Ten Wijngaarde’ may look all cute and tranquil with its quaint, white-colored houses and gardens of daffodils that bloom in spring, but it’s also the place where Bruges’ first feminists found a home. Independent laywomen for whom married life held no allure gathered here to live a pious life, challenging the common medieval belief that all women were to live under the guardianship of a man. The Beguines devoted themselves to caring for the city’s poor from 1425 onwards without ever taking any permanent vows like nuns do. 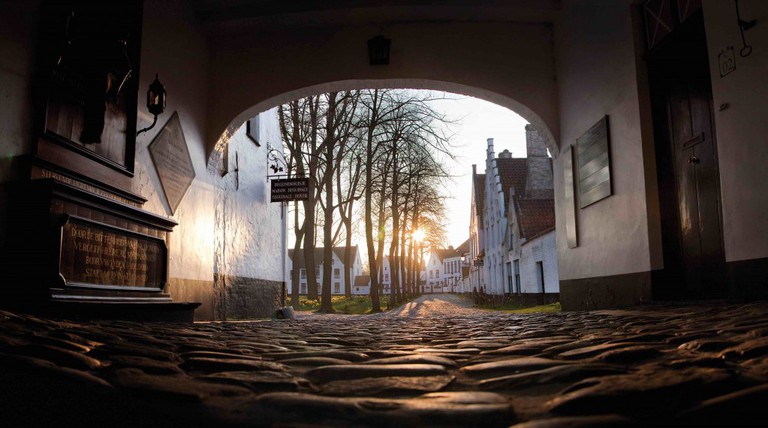 Bruges is a city of jazz cats, where establishments like Comptoir des Arts and ‘t Zwart Huis combine drinks and a homey atmosphere with live smooth blues. While the latter demands a small entry fee of 5 euros on concert nights, cellar bar Comptoir des Arts also hosts free gigs and jam sessions. The same goes for art center De Werf in the Stubbe Quarter, where they have instruments at the ready for any traveling musician who’d like to join in on their monthly jam.

Standing proud on Bruges’ ramparts used to be twenty-five or more windmills. Only four have survived, and along with the four remaining medieval town gates they’ve become the historic hallmarks for a long walk in the green park that encircles nearly all of Bruges. With a bit of luck you might even see the 18th-century Koeleweimill and Sint-Janshuysmill doing their old job of grinding grain. 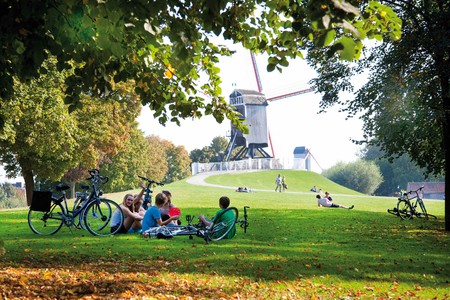 Windmills | © Jan D'Hondt / courtesy of Toerisme Brugge
Give us feedback