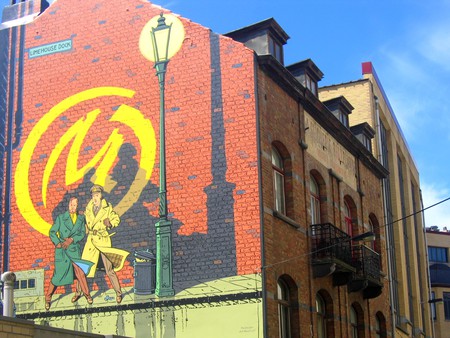 Blake and Mortimer's iconic album cover on the wall of a Brussels home | © visitbrussels.be

With Brussels as a key player in Europe’s comic book history, it goes to figure that the land that came up with The Smurfs, Tintin and Suske and Wiske also has some gems for older audiences up its sleeves. With series situated right at home as well as abroad, a darker tone permeates this lesser-known yet even more artistic branch of Belgian comics culture.

Bearded, brave and broody – our namesake protagonist has all the characteristics of an extraordinary hero with no other wish than to live a simple life with his family. While the Viking-raised Thorgal desperately tries to make his way back to his beloved wife, Aaricia, and their son, the Nordic Gods see his fate differently. From the mind of Jean Van Hamme (a name you best remember when it comes to Belgian comics) and the hand of Polish illustrator Grzegorz Rosinski, this critically acclaimed juggernaut has distinguished itself through extremely realistic drawings ever since 1980.

Quite the counterbalance to rough warrior Thorgal, Jean Van Hamme has this titular character, age 26, as an entitled, womanizing heir to a ten billion dollar holding. Though a chivalrous rebel at heart, the handsome ‘billionaire in blue jeans’ gets sucked into a world of corporate greed when his adoptive father dies in the first album. Van Hamme’s special fondness for the Winch comics and the shady underbelly of big business was apparent when he made 20 Seconds, the 20th album, his pièce de résistance upon retirement as a scenario writer in 2015.

Next on the list is Blake and Mortimer, a series so quintessentially British you’d be forgiven for not knowing it actually originated in Belgium. With the tiny country lacking the presence of an infamous – and at times controversial – intelligence agency, Edgar Pierre Jacobs decided to firmly situate his espionage adventures in English MI5 spheres. Together, physicist Philip Mortimer and forever friend Captain Francis Blake make their way through the tricky waters of the British detective scene, with trips to the Paris Catacombs and even some time travel thrown in. Make sure to kick off your Blake and Mortimer journey with the absolute classic, The Yellow ‘M’, the cover of which you’ll find proudly painted on the side of a Brussels home (Rue du Houblon 24).

They are numerous and faithful, the fans of The Red Knight. They also tend to be a little older than the average comic book enthusiast since the adventures of the golden-haired hero, Johan, were created as the adult exhaust valve of Willy Vandersteen of Spike and Suzy fame. Set in medieval Flanders and showcasing the best of the wandering lonely knight theme, The Red Knight series is over 250 albums strong and shows no signs of slowing down. New illustrator Fabio Bono is set up to deliver a new installment every three months, with Johan returning from the crusades, his spirit broken but his stubble impressive.

Another brainchild of Van Hamme and an immense international success, XIII smacks you over the head with an intriguing premise to follow through with action-packed storytelling. In the wake of the Bourne series in the ’80s comes XIII, a man who washes ashore on the US coast with extraordinary abilities of the Secret Service variety and nothing to identify him but the Roman numeral for 13 tattooed on his collarbone. When the amnesiac witnesses himself on videotape pointing a gun at the recently killed president, the plot thickens.

The fascination with American culture is also present in The Unnameables, a series profiling US army deserters Tony, Tim and Mac. The rather goofy-looking trio makes their way through Asia armed with writer Yann’s cynicism and illustrator Didier Conrad’s exaggerated features. The humor is of the intensely dark kind, matching its pages that are – in a striking departure from the traditional white – jet-black.