The 9 Strangest Statues In Belgium

Brussels' favorite human companion | © Jean-Pol Lejeune/courtesy of visitbrussels.be
From Manneken Pis‘ canine companion to an angel donning a gas mask, the Belgians sure know how to make wonderfully weird statues. Pay extra attention to the fantastical wit of Tom Frantzen, the imaginative Brussels sculptor responsible for close to half the oddities on this amusing yet fascinating list.

Historical Landmark
Add to Plan
Manneken Pis, the 400-year-old bronze statue featuring a mischievous boy urinating into a fountain, is often dressed for holidays, including as Santa Claus for Christmas | © Jeff Overs / Getty Images
He gets away with it because of his fame, endearing copper curls and many multicultural outfits – an especially prized one was gifted by Louis XV – but when you think about it, Manneken Pis really is a peculiar fellow. An angel-faced boy with a six-pack and chubby legs, he stands openly peeing into a basin on the corner of the Rue de l’Étuve and the Rue du Chêne. Nobody really knows why the Mannekenwas made in the first place, but there are more than enough entertaining – and unconfirmed – origin stories to go around.
More Info
Open In Google Maps
Brussels, Brussels, 1000, Belgium
Visit website

Every boy should have a dog and, with little girl Jeanneke Pis already in the picture since the eighties, it was only a matter of time before a third peeing statue was introduced to the streets of Brussels. Zinneke has been doing his business on the Rue des Chartreux ever since 1998. When paying him a visit, it’s not uncommon to walk in on people pretending to have a wee along with him, Zinneke-style. 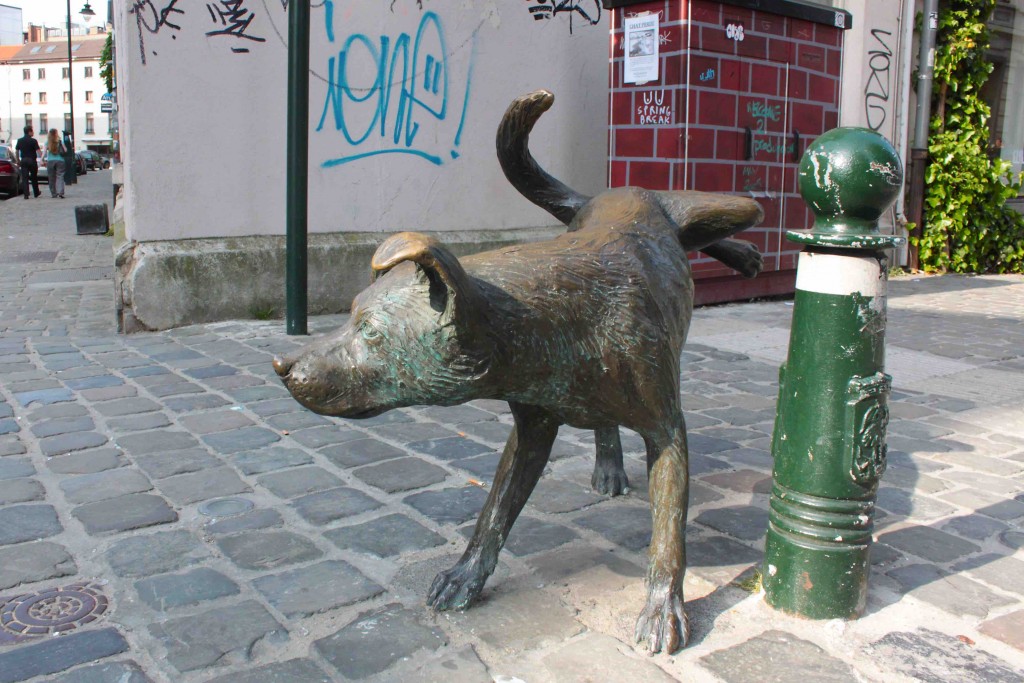 Colorful, cartoonish and utterly bizarre, Alain Séchas’ La Cycliste set the city of Brussels back about a 100,000 euros in 2005. Mostly known as ‘cat on a bike’ by locals, the slightly surreal, spandex-wearing feline can be spotted in front of the back entrance to the Galeries Royales.

La Cycliste, in front of the Galeries Royales at the corner of Rue du Marché aux Herbes, Brussels, Belgium 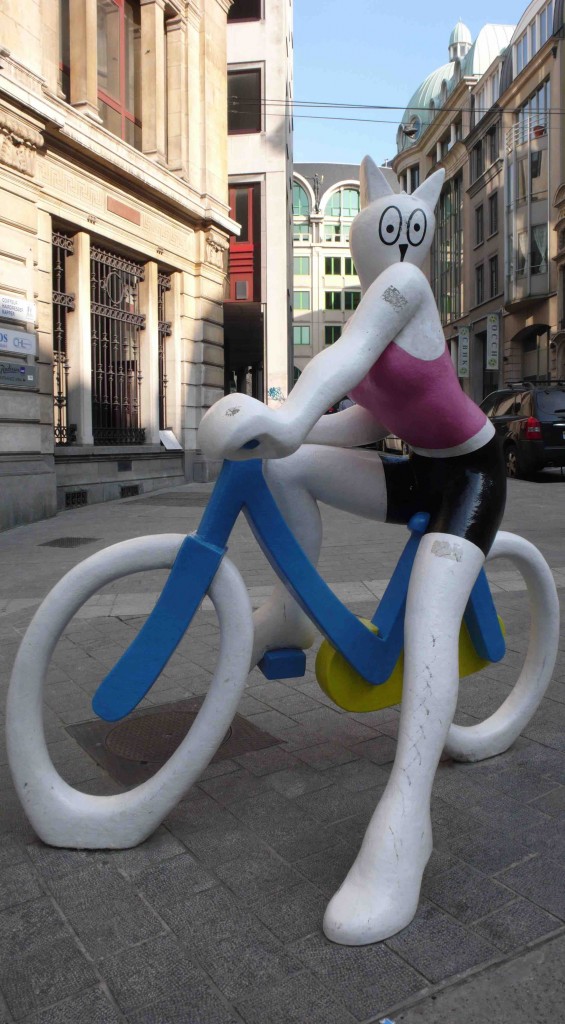 Brussels is a comic book kind of capital and the fumbling police officer on the Place Sainctelette in Brussels proves that once again. Plucked straight out of the adventures of Hergé’s Quick and Flupke series, the unsuspecting Agent 15 has his foot grabbed by a mischievous canal urchin and is forever suspended mid-air. It was local artist Tom Frantzen, designer of Zinneke, who also sculpted this amusing cartoon figure for his home city.

While a statue of a small man pouring a pint of liquid into his open cranium might seem somewhat lugubrious, Fonske, as he’s known, is actually quite beloved in the student city of Leuven. His full name is Fons Sapientiae, or ‘Source of Wisdom’ and that’s actually knowledge being absorbed through his skull, not beer. Fonske is sort of the Leuvenaar’s answer to Brussels’ Manneken Pis in a healthy city rivalry that has been going on for ages. He’s even known to play dress up on special occasions.

2005 was a big year for the imaginative Tom Frantzen, as he got to delight people not only with the creation of Zinneke, but a fountain in the form of an animal jazz ensemble as well. The sculpture has frogs playing the accordion and the trumpet, crocodiles on contrabass and drums, and a hippo working the tuba. The whole works shines with the creative folly that trademarks the best of the Frantzen’s work. A similar scene of his is a fable in stone form called The Wedding, a fountain that shows the marriage of two storks and the party with all of their animal friends.

A visit to Antwerp’s ancient fortress, Het Steen, is also a visit to the port city’s most feared water ghoul. A testament to the area’s rich folkloric past, the bronze statue of Lange Wapper has been set up to commemorate the giant that used to terrorized the city in the 16th century. Either that or children’s and drunkards’ imaginations ran wild when looking at the wooden machinery with long arms used on the docks – a theory the two inebriated friends trembling at Lange Wapper’s feet seem to confirm.

Monastery
Add to Plan
Strange Tom Frantzen gems – the country is clearly full of them. In Ghent we bump into this angel wearing a gas mask and threateningly raising his trumpet. His name means as much as ‘the angel of purification’ and you can find him raging atop the Monastery of the Augustinian Fathers against mankind, its threats of chemical warfare and its overall pollution of our planet.
More Info
Open In Google Maps
Ghent, Belgium

In front of Antwerp’s City Hall stands a bronze fountain with a man on top throwing away a severed hand with all of his might. Knowing the heroic legend behind the statue will reduce the creepiness somewhat. The man is actually Silvius Brabo, a courageous Roman who, according to legend, rid the city of the evil giant Antigoon, who demanded tolls from sailors and cut off the hands of those who refused to pay. After defeating the titan, Brabo gave him a taste of his own medicine by severing his hand and throwing it in the river Scheldt. The Dutch phrase ‘handwerpen’ (throwing a hand) came to be and the folklorically inclined insist that this is also how the city got to be named ‘Antwerp.’ 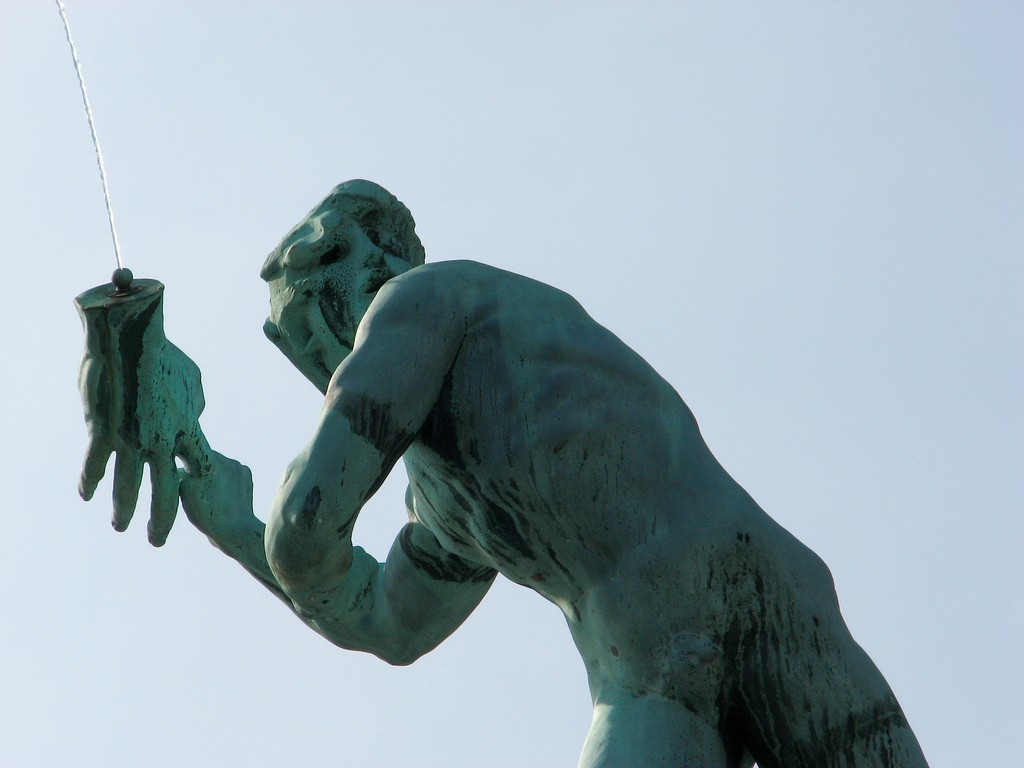 There are six statues of Brabo spread across Antwerp, this one by Jef Lambeaux being the most famous | © David Huang/Flickr