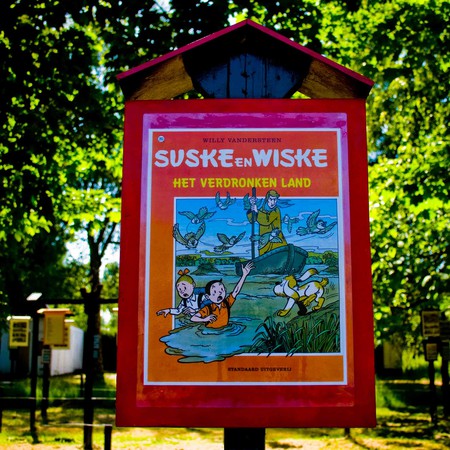 Suske en Wiske (Spike & Suzy): a comic book title that takes many a Belgian adult back to his or her childhood, fondly remembering the red-framed albums that were a staple in their bedroom. The adventures of the inseparable child heroes Suske and Wiske were the reason some children sneakily read well into the night with the help of a flashlight. Translated into several languages, complete with alternative character names, plus a television series and theatrical performances, make this beloved Belgian comics series certainly one of the country’s most legendary.

This series by Willy Vandersteen had a profound impact on Belgian culture and remains popular to this day. The author loved to tackle big themes – usually international adventures, spiced up with a dose of fantasy, science fiction and regular time travel. Whenever the story widened in scale, Vandersteen kept the reader grounded by throwing in some humor, often at the expense of the goodhearted but misguided character Lambik – who Vandersteen, being Belgian to the core, named after his favorite brand of beer.

It’s not all laughs all the time though, as the author was adamant to include a moral element in the series. Vandersteen’s inclination to comment on current societal topics not only made Suske en Wiske educational for kids, it added a second layer for their parents to enjoy. A little knowledge of current affairs at the time revealed that the 1954 album De Speelgoedzaaier was more than just a humorous comic book. It was Willy’s own special way of commenting on the arms race during the Cold War. 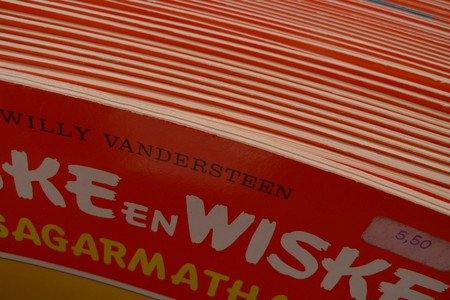 Talents like this have made Antwerp born Willy Vandersteen (1913) one of the most renowned Belgian comic writers – quite a feat in the country that has produced comic legends such as Peyo and Hergé. Even as a toddler, the love of a well drawn story couldn’t be denied, as a four-year-old Willy tore through the pages of the weekly children’s magazine De Kindervriend (The Children’s Friend), riveted by the pictures. Later on he would entertain friend and foe with drawings and tales he made himself. He went on to make over a 1,000 albums that sold millions of copies across the world, including his most famous creations, Suske en Wiske, and Vandersteen soon became a name etched into comic book history. It was not just the adventures of the brave raven-haired boy and whip-smart golden-haired girl that made Vandersteen renowned. The albums that starred valiant do-gooder Johan in The Red Knight and a female collie in Bessie were very successful in their own right and crossed the Belgian border just like Suske en Wiske. 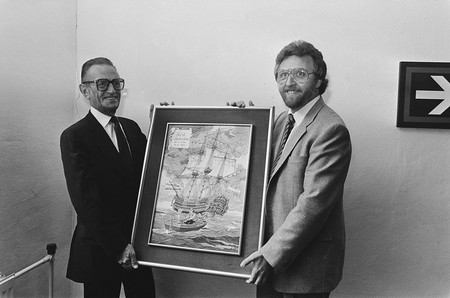 That Suske en Wiske would come to occupy an even more special place in the hearts of Belgians was immediately clear with its first publication in 1945. The debut appearance of Wiske (Suzy) in the newspaper De Nieuwe Standaard was immediately well-liked by the public, despite the fact that Suske (Spike) was nowhere to be seen yet. At that time the hero of the day was Rikki, a champion boxer who looked a little like Tintin and was way older than our spunky heroine. However, Vandersteen soon felt that Spike belonged by Suzy’s side, being of the same age and with a folksier nickname (the Dutch ‘Suske’) in honor of the author’s grandfather. Spike’s full name is therefore ‘François’, something only dedicated fans have picked up through rare occasions when the character gets referred to in that old-fashioned way. Vandersteen gave Rikki the boot in the second album, The Isle of Amoras, and immediately replaced him with Spike, who Suzy’s aunt Sidonia adopts at the end of the adventure.

Despite growing up in the Amoras wilderness, Suske (Spike) is perhaps the most flawless character of them all. Gentle-hearted, brave and polite, he forms the counter-balance to Wiske (Suzy) who, while smart, can behave vainly and acts impulsively. The headstrong girl often gets a little jealous when Suske gets attention from other young ladies, though she once stated that it would never work between the two of them. Other than some tiny hints that the two might have feelings for each other, Vandersteen has always kept romance on a low burner.

Unfortunately, that’s also the case for aunt Sidonia, whose crush on the goofy Ambrose has been long and unrequited. And while her gangly looks, with enormous feet and pointed features, might not win her any beauty awards, Ambrose is hardly a stud either. The middle-aged, bald man with a paunch does consider himself quite the catch though. His mistaken notions about his own capabilities – he often calls himself ‘the brains’ of any operation because he can’t compete with resident powerhouse Jethro – are the source of big laughs and have made him immensely popular.

It is telling of the Flemish public’s nature and Vandersteen’s perspective that such a flawed character would become a reader favorite and occupy a huge role in the albums. Belgians may admire bravery just as much as the next guy, but they reserve a special soft spot for anti-heroes that are taught humility all the same. It’s the reason why Ambrose is thought to be hilarious: as soon as his arrogance has made of mess of things – something which happens often and is a great catalyst for stories – he’s cut down in a funny way. Easily seduced by money (De Poenschepper) or a beautiful lady (Tedere Tronica) but with a good heart all the same, Ambrose might be the most human character of them all, and Belgium loves him for it. 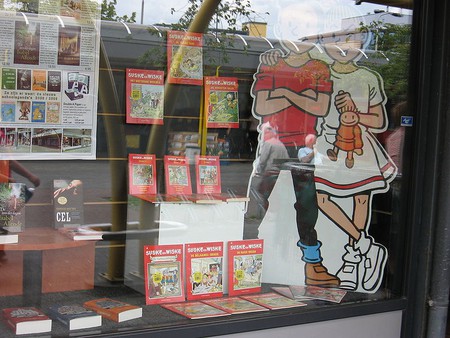 Perhaps even more representative of Belgium is Suske en Wiske‘s language, deeply rooted in Flemish culture with colloquialisms and dialect throughout. When the comic book made it to the Netherlands, it was enjoyed tremendously, though much of its Antwerp-specific turn of phrase did not translate. The move to standardized Dutch in 1963 was inevitable with the comic’s growing popularity. The pride and love Antwerp cherishes for Suske en Wiske has never gone away, however, with a new edition of the 1977 album ‘De Raap van Rubens’ being published entirely in the port city’s dialect in June of 2016.

Another way Vandersteen loved to flex his Dutch literary muscles was through alliteration, a technique present in every single album. Besides numerous alliterating titles such as De Snorrende Snor and De Sissende Sampan, the author once filled half a page only using words that begin with ‘v’. The author’s language games are still thoroughly enjoyed by adults and kids today, with the youngest ones being utterly thrilled by the fun and melodious ring the stories have to them.