Out of Brussels’ 19 municipalities, Saint-Josse (Saint-Josse-ten-Noode) is surprisingly the most densely populated and the most deprived. This is surprising because it is full of tranquil squares and the streets are lined with expensive cars. In reality, Saint-Josse has contributed so much to modern-day Brussels; this diamond in the rough is brimming with cultural gems waiting to be unearthed. Here are our picks. 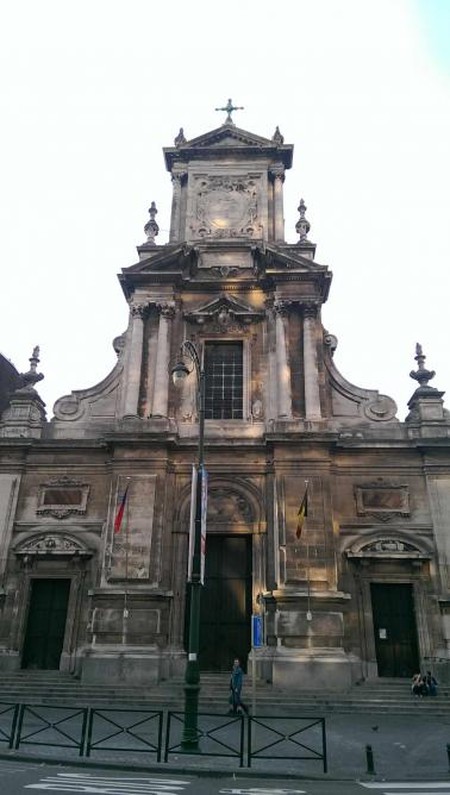 Brussels is arguably one of the most international cities in Europe and to this day, enjoys the best frites (fries), gaufres (waffles) and beer. This vibrant metropolis is also a city of extremes where the super wealthy live alongside the most socially excluded in Belgium.

Place Saint-Josse (Saint-Josse Square) has a delightful church, L’église Saint-Josse, with a seemingly Baroque façade. However, don’t be fooled as it was built in 1867 and is part of Brussels’ many Revivalist architectural landmarks masquerading as Baroque architecture. 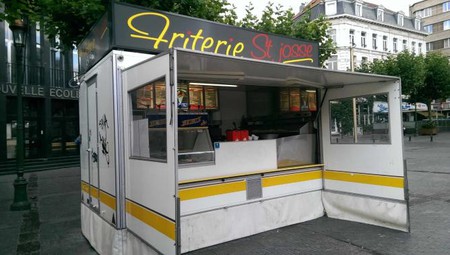 Opposite this wonderful edifice, you will find a simple frites van, which has the best frites in Brussels. The Brussels Rough Guides will usher you towards Place Jourdan or Place Flagey for the ‘best’ frites, but after lengthy consideration, the frites van at Place St Josse is a cut above the rest because of the freshness of its produce. Here, the company processes its own potatoes in the chipping machine a few short moments before tipping them into the fryer.

Aside from this unctuous heaven, most tourists will stay in and around the center, but the location of Saint-Josse means that it is a 10-15 minute walk to De Brouckère (the heart of downtown Brussels). Downtown Brussels offers you the ‘tourist’ Brussels and that is fine. But if you want to get a real flavor of the city of Brussels and see Bruxellois in their day-to-day environment, then taking a walk around Saint-Josse will help you understand this city of many faces, cultures and architecture.

The proximity of St Josse to Schuman (the busiest metro station for the European Quarter where the main EU institutions are located) means that the army of workers in the European Quarter can nip down to Place Saint-Josse for a cornet de frites (cone of French fries) with the popular tomato and sweet mustard-flavored andalouse sauce. Insider tip: when ordering frites, ask explicitly for a ravier de frites instead of a cornet de frites. (‘Ravier’ is a small serving dish, like a punnet). You get more frites for the same price, and it’s easier to eat.

The ethnic diversity of St Josse is emblematic of the city of Brussels, which has been home to so many people from all over the world. Multicolored symbols and flags represent the utopian, multicultural society, with people, living and working alongside each other with their race and creed afforded no importance. 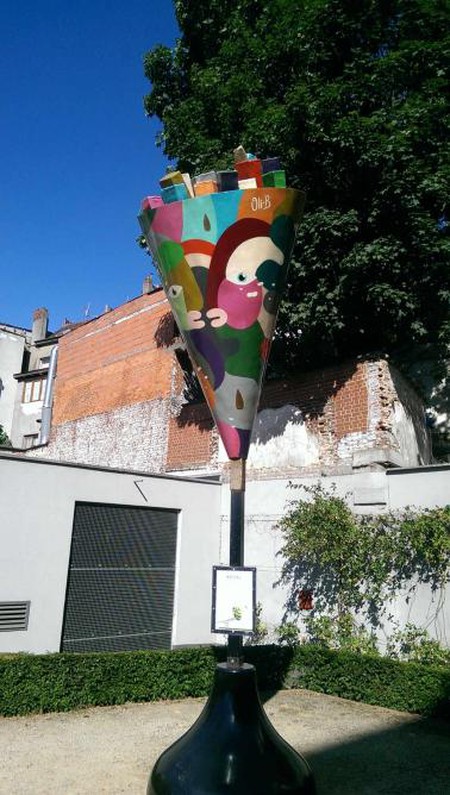 This art installation in St Josse by artist Oli B is in the garden of the Botanique Medical Center. It is a bright, multi-colored cornet of frites, which is widely accepted as an integral part of Belgian culture despite the potato being native to South America. Each individual ‘fry’ symbolizes each one of us in our ‘cone’ — the society in which we live. This clever piece of art represents ethnic communities who reside in St Josse, originating from Africa and Asia, and it emphasizes that they are as essential to the contemporary condition of Brussels and are every bit as European as the humble spud. 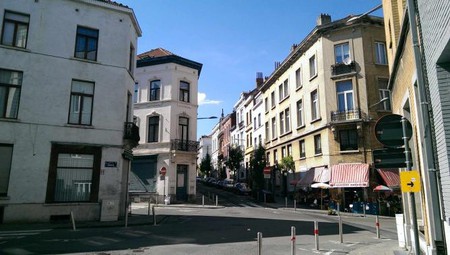 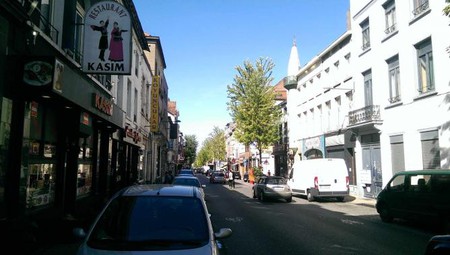 The cultural imports of Saint-Josse are well known in Brussels. The Turkish have brought their culture of hospitality, their ayran (healthy yoghurt drink, sometimes taken with meals) and their myriad variations of kebab: döner, şiş, ískender, köfta, and so on. Their good grooming habits also are woven into the fabric of St-Josse. You will encounter several Turkish barbers owned by Turks and Kurds — a standard gents haircut can be as low as €5 if you look hard enough.

There are many people who come from the Middle East and make a valuable contribution to Brussels, and everyone living here can benefit from their cultural production. The Arab Cultural Center in Saint-Josse has been a strong feature of the neighborhood since 1988. Here, you can improve your Arabic language skills and can book lessons to learn an array of Middle-Eastern musical instruments. 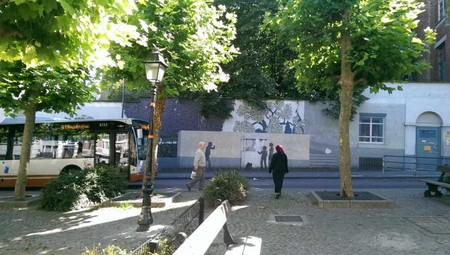 On a balmy summer day, you can mill around the narrow streets as you munch apricots from the Turkish fruit shops and be amazed at how much of Saint-Josse is as charming as it is exotic. You will have plenty of chances to sit and hear the birds singing, such as in the leafy square of Place François Bossuet. Every so often, you can see the pavements are littered with small multi-colored tiles. These mosaic tiles are done in an art deco style and are ageing plaques to a by-gone age. In the early part of the 20th century, Saint-Josse was a bourgeois area of Brussels, which was full of boutiques, Horta-inspired town houses, and the wealthy Bruxellois industrialists.

In 2015, St Josse is still full of boutiques where you can unearth specialty foods from Bulgaria and Romania. The Congolese community is visible in Saint-Josse as well, with an array of beauty shops, convenience stores selling Congolese goods and relaxed cafés, which are normally open until the wee hours of the morning.

In the 1960s and 1970s, many Indians, who were expelled from Uganda, Kenya and Zanzibar, chose to stay in Belgium en route to Britain. They settled in Saint-Josse, and the neighborhood is comprised of Sikhs, Hindus and to a lesser extent, Jains. Many currently run the local convenience stores, and you can watch young people playing cricket, using makeshift wickets from their grandmothers’ shopping trolleys, in the streets and parks of Saint-Josse. 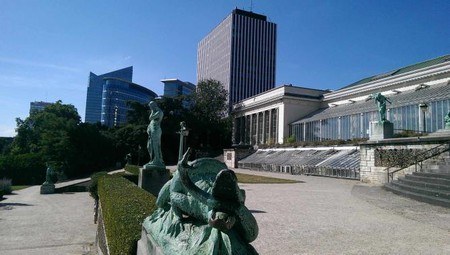 Botanical Garden of Brussels with towering skyscrapers nearby | © Thomas Moran

The grounds of the Botanical Garden of Brussels are a Narnia-esque escape from the hustle and bustle of the city. The neat hedgerows and elaborate classical statues are dotted around the gardens, which allow the visitor a brief interlude from urban life. The main building of the Botanical Garden (Botanique) is also impressive, constructed in 1826. It hosts numerous concerts and is an important arts venue in Brussels. 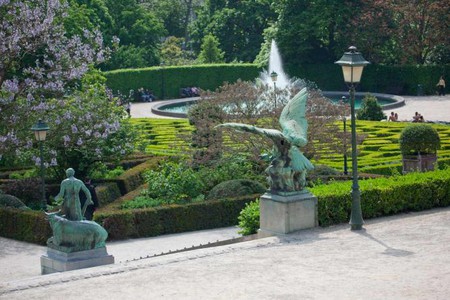 The sound of birds tweeting overhead in the multitude of squares, the procession of cars tooting happily that signal a Muslim wedding, and the overly familiar greetings of ordinary people at the bus stops are some of the audible delights you will experience in Saint-Josse. For example, The Jazz Station is a converted train station and an intimate, vibrant jazz venue and cultural center. It has a cabaret atmosphere, cheap bar and great acts every weekend. Every so often, the rumble of a train passing underneath makes the place shake, transforming the setting into a unique urban space for its performers and audience alike.

Saint-Josse has a lot to offer travelers who want to discover the real people that make up Brussels and to observe daily life in one of the most international cities in Europe. If you are looking for art deco architecture, hot Belgian frites, and some respite from the thousands of tourist gift shops selling cheap souvenirs, then you should spend a few hours exploring Saint-Josse — it may surprise you.