René Magritte: 11 Things You Didn't Know About The Belgian Surrealist

René Magritte is one of the most famous artists, remembered for his controversial images and surrealist artworks. You may assume that he loved painting himself with an object covering his face or that suits and bowler-hats were part of his image, according to his portraits and pictures, but there is more to him than just pipes and flying men with umbrellas. Here are a few facts about the Belgian surrealist artist to get to know the man behind The Son of Man. 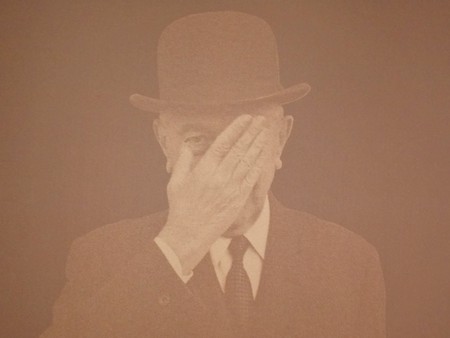 René Magritte. Picture taken by the author at the Magritte Museum on January 31st, 2016.

Similar to other famous artists, Magritte started drawing at a very young age, but years passed until he finally met his true artistic passion and found his particular style, surrealism. Around 1924, Magritte discovered collages by Max Ernst and paintings by Giorgio de Chirico, and moved by their ideas, started to experiment in a new artistic direction. Many of his experimental artworks are part of surrealism, but he declared Le Jockey Perdu (The Lost Jockey) his first surreal painting.

Museum
Facebook
Email
Twitter
Pinterest
Copy link
Share
Map View
In 2009, Magritte’s famous painting, Olympia, was stolen from a museum. Fortunately, the painting was returned by the same thieves in 2012. Apparently, they could not sell the painting because it was so famous. The painting that captures the nude portrait of Magritte’s wife, Georgette Berger, can still be found in the René Magritte museum. 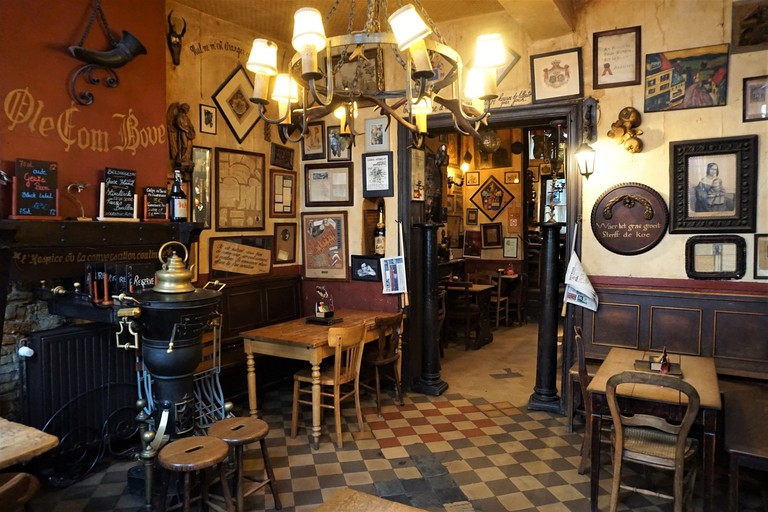 The cosy interior of La Fleur en Papier Doré / Het Goudblommeke in Papier. | © La Fleur en Papier Doré / Het Goudblommeke in Papier
This famous bar in Brussels went from being an 18th–century convent of the sisters of St-Vincentius, to a hot spot for poets and artists, since it was opened by Greet Van Bruaene. Stepping into the bar is like taking a step back in time, you can almost image this spot as a meeting place for creatives such as René Magritte. Supposedly, this is the bar where Magritte’s first art exhibition took place. You can go in for a Belgian beer and at the same time admire Greet Van Bruaene’s collection of original sketches, photographs, and drawings of famous artists, including Magritte. Remember to look for a black-and-white photograph of the artists that used to frequent the place.

Soon after his mother’s tragic death, René Magritte met Georgette Berger when he was only 15 years old, in 1913. According to the story, they met at a local fair and fell in love, but a twist of fate pulled them apart. It was not until years later, that they would cross paths again in an art supply store in Brussels. She then became his muse and in 1922, his wife. 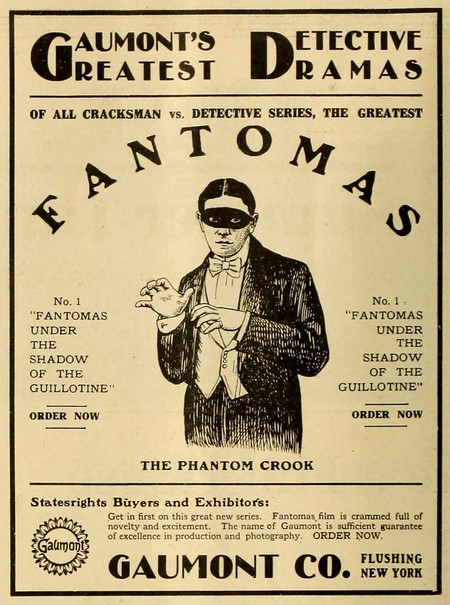 Magritte went through a phase influenced by a French thriller and its protagonist, Fantômas. Fantômas, a thief and master of disguise, famous for his sadistic murders and crimes, was based on the novels by Pierre Souvestre and Marcel Aillan; and was brought to film by Louis Feuillade in 1913. Magritte painted a scene of the film in 1927 and named it L’Assassin Menacé (The Menaced Assassin).

If you go into the theater located in the heart of Brussels, you will be able to see a ceiling painted by René Magritte. The original idea was based on a blue sky full with clouds and flying sphere-shaped objects, but the idea was rejected because the symbols seemed too dark for the theater, according to the people in charge of the restoration. You can still see the original idea displayed on the Magritte Museum in Brussels.

Magritte tried to experiment in various artistic fields for leisure, such as photography and filmmaking. He would gather a group of friends, along with his wife, and film. He also appeared on homemade films and acted on different scenarios with the rest of the group. Magritte was also into photography, and even when it seemed as a hobby, he would use the photographs for inspiration in later years and delivered paintings such as La Gravitation Universelle (Universal Gravitation) and Le Thérapeute (the Healer).

Unlike other artists, Magritte did not use words to complement paintings, but to give them a whole new meaning. He wanted to make the spectators find the link between the images and the words, even when it seemed there was none. It was a new form of language that Magritte used for a phase of his artistic life, and one which he came back to every once in a while during his career. He sometimes tried to unite words and images as matching objects, while other times he tried to represent senses in concept blobs. 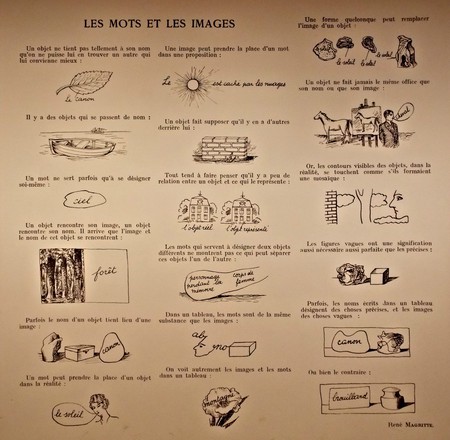 Words and Images by René Magritte. Picture taken by the author at the Magritte Museum on January 31st, 2016.

Asteroids are usually named after famous and important characters of history. On April 3rd, 1989, Eric Walter Elst, a Belgian astronomer, discovered a main-belt asteroid and named it after the Belgian surrealist artist, René Magritte.

Magritte gave great thought to the titles for his artwork. He wanted to show part of his ideas, thoughts, and dreams but also to challenge the viewer and make them truly analyze his work and link it to the meaning of the title. Magritte once mentioned in a letter to Paul Nouge, ‘I obtain pictures in which the eye must think in a way entirely different from the usual.’ (1927)

Magritte sometimes painted the same object several times, but would give it a different name, making the meaning of the work different from the past ones. He even used to consult his surrealist colleagues for advice on the titles. La Trahison des Images (The Treachery of Images), is a great example of his use of titles. Along with the written statement ‘Ceci n’est pas un pipe’ (This is not a pipe), Magritte explained that, in fact, it was not an actual pipe, but the painting of one. Therefore, when you begin to understand what Magritte meant, you begin to realize the image is indeed just as tricky as the title suggests.

The Treachery of Images by René Magritte | © Jason Ford/Flickr

Magritte’s artwork impacted advertising as well as many other industries, such as music and film. La Trahison des Images (The Treachery of Images) has been used for advertisement and the spread of ideologies to this day. By the words written on the painting ‘Ceci n’est pas une pipe’ and the controversy that came along with the statement, the fame and influence from the painting was expected. What is truly impressive is the great impact made by L’Empire des Lumières (The Empire of Light) on music and film.

If you are into rock, you might have heard about Rock and Roll Hall of Fame’s Jackson Browne’s Late for the Sky album. His album was released on 1974 and it was considered as one of the ‘100 Best Albums’ by Rolling Stone magazine. The cover was inspired by Magritte’s famous painting L’Empire des Lumières. Further, another reference to his work appeared on the poster for the horror classic of all times, The Exorcist. The shot of Father Merrin by a street lamp was also surprisingly influenced by Magritte’s artwork, L’Empire des Lumières.